Life's a beach at Lido, an island near Venice Visitors to Lido can't be faulted for thinking they're no longer in Venice, possibly because of the island's vehicle traffic. This statue of the Lion of St. Mark — the symbol of Venice — is one clue to its ties to the city across the lagoon. (Kent Harris/Stars and Stripes)

Visitors to Lido can't be faulted for thinking they're no longer in Venice, possibly because of the island's vehicle traffic. This statue of the Lion of St. Mark — the symbol of Venice — is one clue to its ties to the city across the lagoon. (Kent Harris/Stars and Stripes) 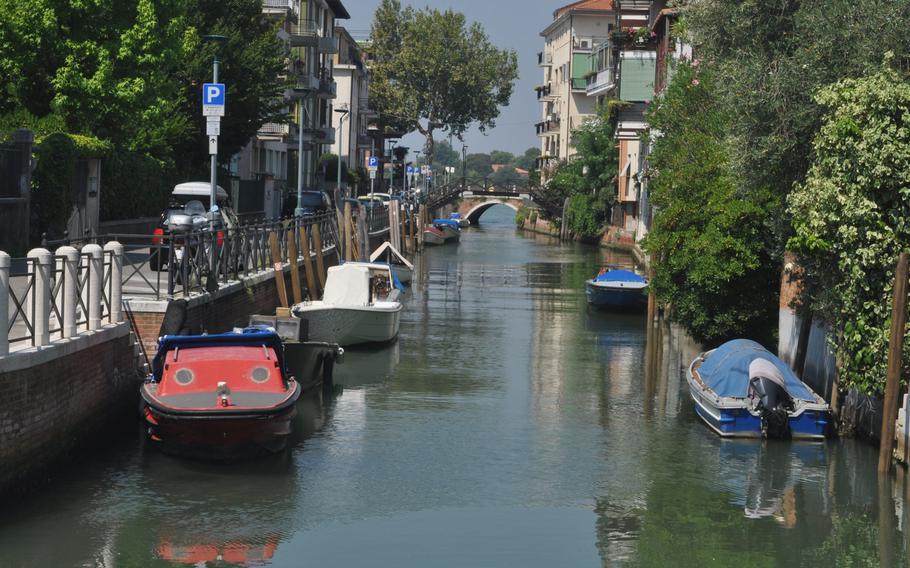 Though there are cars on Lido — unlike the majority of Venice — there are still canals, and private and commercial boats are never far from sight. (Kent Harris/Stars and Stripes) The resort island of Lido attracts hordes of sun-and-surf lovers to its beaches. (Kent Harris/Stars and Stripes) The beach is only a short — though sometimes lengthy — boat ride from Venice, thanks to the resort island of Lido, which sits in the lagoon to the southwest of the main islands. (Kent Harris/Stars and Stripes) Italian tourists display some castle-building ability during a recent visit to the island of Lido in the Venetian lagoon. (Kent Harris/Stars and Stripes) 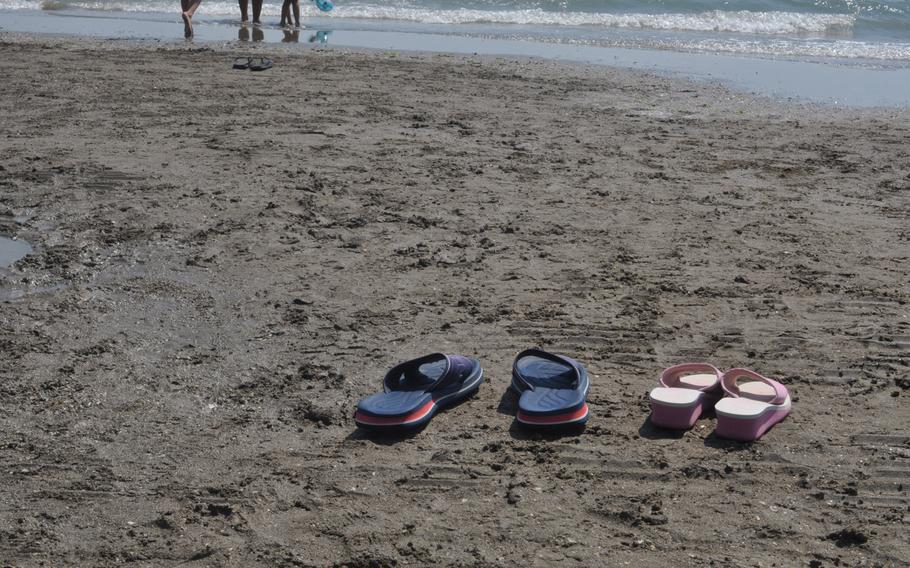 The owners of these sandals left on the beach in Lido have probably gone to take a dip. According to a local lifeguard, there isn't a dangerous undertow offshore, and the biggest danger is two varieties of jellyfish that are not generally considered deadly. (Kent Harris/Stars and Stripes) 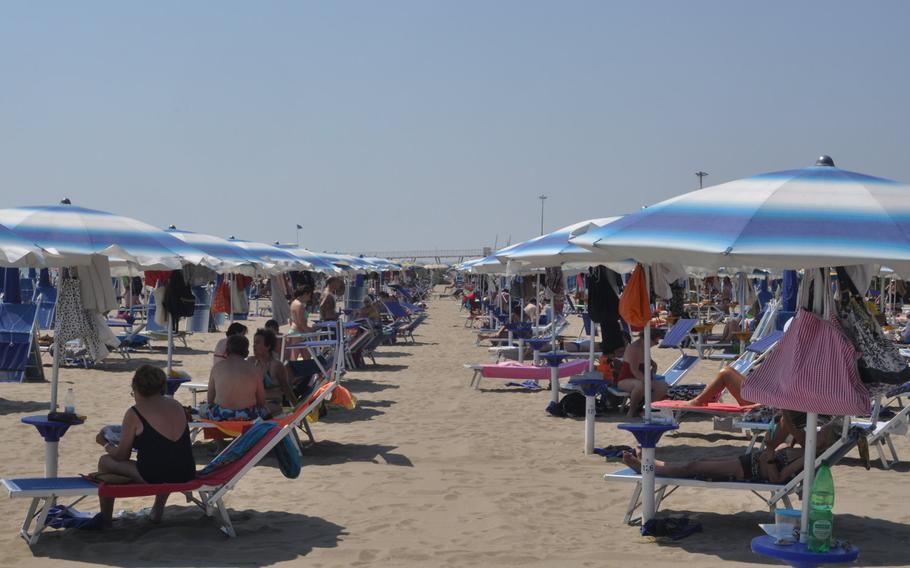 If sitting in the shade is your thing, you're in luck on the island of Lido. Many Italian beaches offer similar setups. Those who are happy just spreading a towel can do so in certain areas. (Kent Harris/Stars and Stripes) 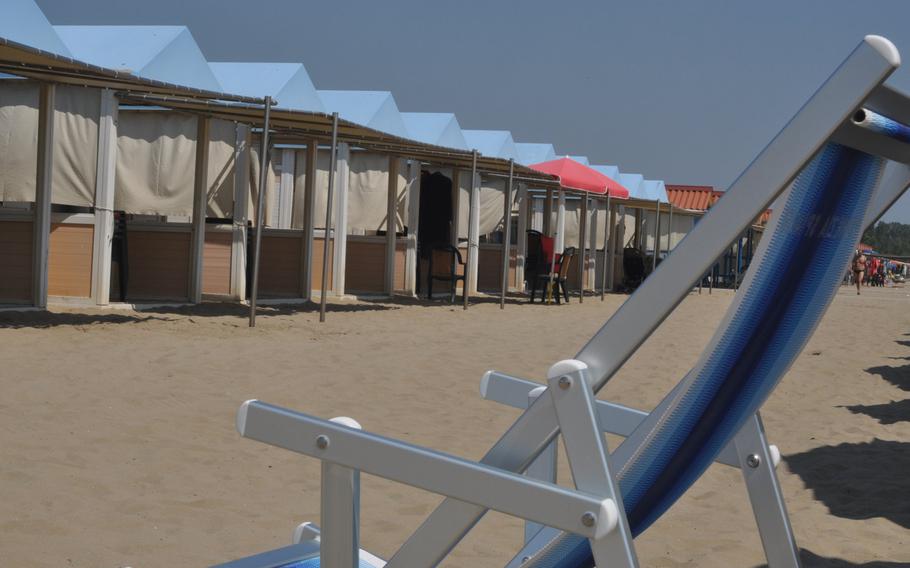 If a beach towel or a chair-and-umbrella arrangement isn't sufficient for your beach-going experience, you can rent a small cabin in Lido. (Kent Harris/Stars and Stripes)

It wouldn’t be that long of a swim from a few parts of what most tourists consider Venice to the nearby island of Lido.

Of course, dodging an array of watercraft — and likely the Italian authorities — would add several layers of danger to what would seem to be a fairly easy (though perhaps very dirty) plunge.

So forget about donning those skimpy swim trunks. A water bus is a safer bet, but it might or might not be quicker. A trip to Lido by boat from the train station routinely takes almost an hour. But for those who love the sun, sand and gently splashing waves, it’s probably worth it.

Lido di Venezia is far closer to Venice than it is to similar summer resorts along the coast between Venice and Trieste. But in terms of atmosphere, it’s nearer to places such as Caorle, Lignano and Grado than to St. Mark’s Square or just about any recognizable Venice landmark.

There are canals and boats on Lido. But there are also more than a few cars ferried over from the mainland. Almost every square inch of the southern part of the island is beach. And this time of year, it’s a pretty popular place. Lifeguard stations dot the public parts, though they probably aren’t called on very often for “Baywatch” moments.

During a recent visit, one lifeguard said Lido beaches are safe from undertows that make some Italian beaches dangerous. There are two types of jellyfish that occasionally cross paths with swimmers and waders, but their stings generally cause itching rather than serious illness or death. And contrary to that classic 2008 movie “Sharks in Venice,” there are no fins to worry about.

The possibility of sunburn is a greater worry. You can protect yourself by renting a chair and umbrella. Or splurge even further for a small cabin. There are rows and rows of them, as there are on many Italian beaches, along with hotels that control large sections of beach and charge for access. But there are public sections, too. If you beat the crowd, you might even find room for a towel or two.

What else is there to do in Lido besides hang out on a beach? There are some shops and restaurants along Gran Viale, the main road that connects the beach to the water bus dock. And during a few weeks of the year, Lido is home to the Venice Film Festival. There’s not much to see at the site when the festival — set this year from Sept. 2-12 — isn’t going on, though.

For those who like to wander, there are some nice neighborhoods to check out.