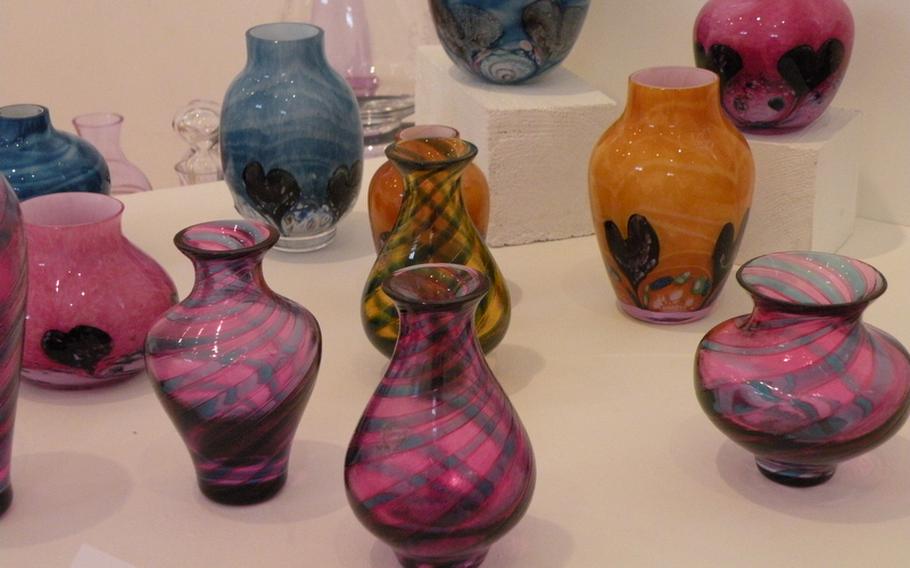 The Tartan Twist, foreground, and Cadenza vases are among nearly 400 pieces of glass on display at the Kings Lynn Arts Centre Trust until Feb. 25. (David Hodge/Stars and Stripes)

The Tartan Twist, foreground, and Cadenza vases are among nearly 400 pieces of glass on display at the Kings Lynn Arts Centre Trust until Feb. 25. (David Hodge/Stars and Stripes) 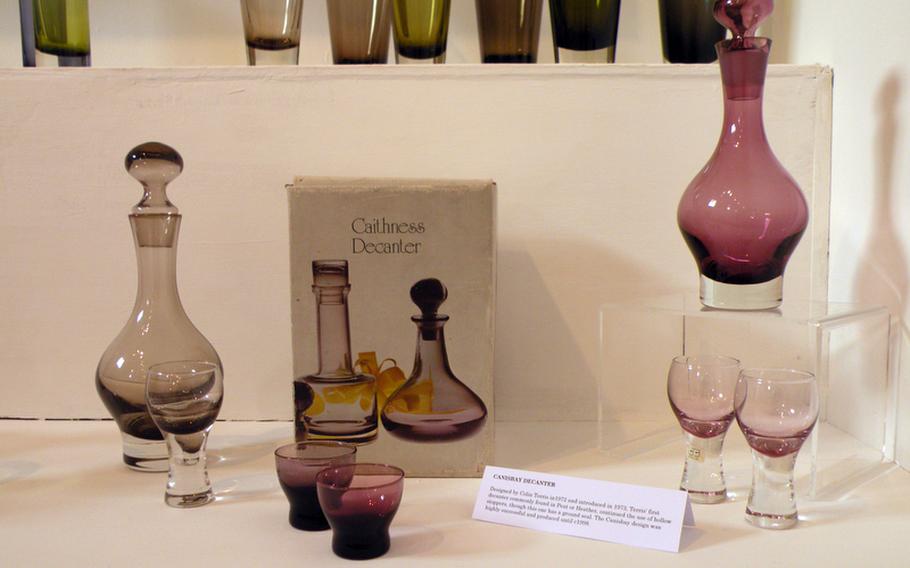 A glass decanter set from 1973 designed by Colin Terris of the Caithness Glass company, is on display at the King's Lynn, England, Arts Centre Trust, on Jan. 21. Caithness produced glassware for 25 years. The set is among about 400 pieces from the collection of Dr. Graham Cooley, an avid collector of 20th century glassware. His collection will be on display at the art center until Feb. 25. (David Hodge/Stars and Stripes) 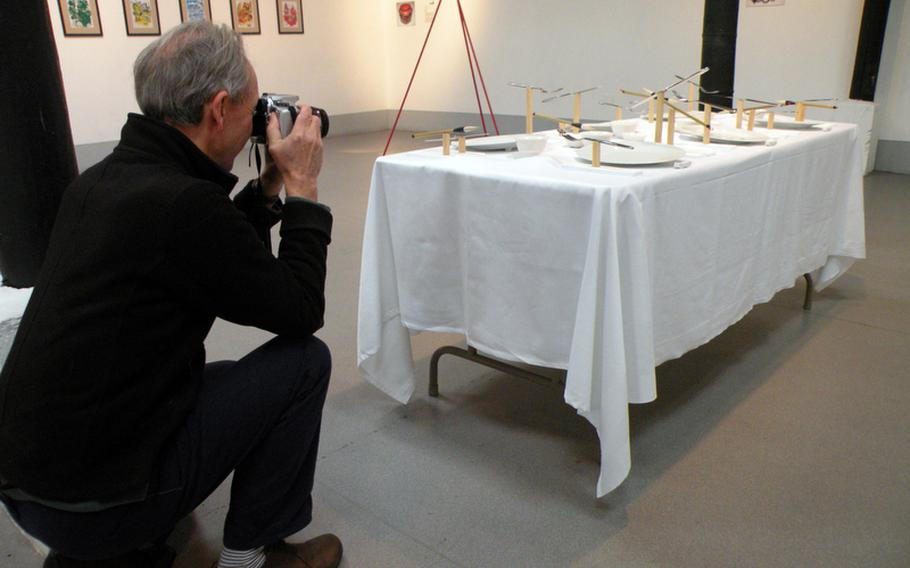 Artist Richard Layzell takes a photo of his floor art, which is part of the "Re-home" exhibition at the King's Lynn Arts Centre Trust. (David Hodge/Stars and Stripes) 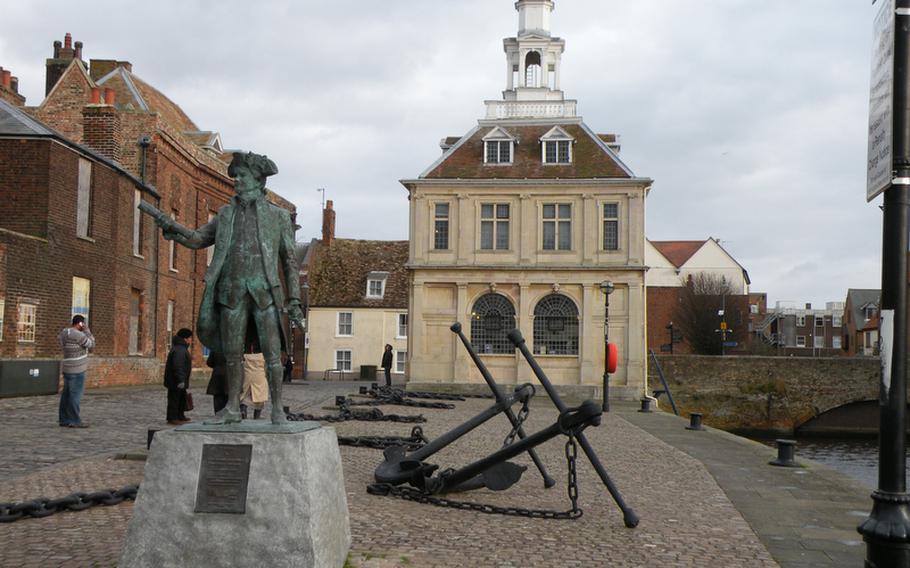 A statue of explorer George Vancouver, who was born in King's Lynn, England, sits in front of the town's Custom House. King's Lynn is an ideal quick trip from RAFs Lakenheath and Mildenhall. (David Hodge/Stars and Stripes)

The original plan quickly faded after an hourlong trip recently to the town of King&rsquo;s Lynn from RAF Mildenhall, England. It wasn&rsquo;t the cold temperatures or the light rain that dampened plans to explore the town&rsquo;s Saturday market; it was the near absence of the market itself. All that remains is a sole seafood stand selling fresh cockles and shrimp.

Supposedly, the number of vendors at King&rsquo;s Lynn&rsquo;s markets has declined because of an increase in costs for market space. Lucky for me, however, King&rsquo;s Lynn has plenty more to see, and it all seemed easily accessible from the large downtown shopping area.

The King&rsquo;s Lynn Arts Centre Trust inhabits one of the town&rsquo;s remaining guildhalls on King Street, between the town&rsquo;s High Street and the River Great Ouse. The center had two exhibits and proved to be an interesting alternative to the market visit.

One exhibit showcased nearly 400 glassware pieces from the collection of Graham Cooley, an avid collector of glassware. Caithness Glass produced these particular glass pieces in Scotland between the 1960s until the early 2000s. Caithness glassware from this period is known by its smooth, jewel-like hues aptly named Peat, Heather, Loch and Moss, after the Scottish countryside. The glassware will be on display until Feb. 25.

The second exhibit, called &ldquo;Re-home,&rdquo; is a collaborative effort by six artists with three exhibits across the city. Along with two floor art pieces at the arts center and nearby Lynn Museum, the third locale is an apartment restored to 1960s decor.

For the project, each artist was asked to select a random item from the Lynn Museum and create a piece of art in response to the object. Items selected were a goffering iron (used to iron ruffles and other trimmings), egg stand, tea caddy, flour dredger and manila archive boxes from the museum.

The final selected item &mdash; a 20th century utensil rest &mdash; belonged to the project&rsquo;s lead artist, Richard Layzell. He was on hand at the arts center to put the finishing touches on his piece. He said his item reminded him of chopstick holders used in China. It inspired him to create a piece of art using two tables.

On one table, there is a formal dinner setting, with the silverware and plates set at various angles. He replaced one utensil with a Chinese paintbrush. On an adjacent table sits several old farming tools, potatoes and some soil. Layzell said it represents the agricultural heritage of Norfolk County.

&ldquo;So in a way, you could say, that table provides the food for the other table,&rdquo; Layzell explained.

Some notable upcoming events at the art center include an appearance by quirky comedian The Boy With Tape On His Face, the Eastern Open art show and a large &ldquo;Star Wars&rdquo; exhibition later in the year.

Food: King's Lynn has a variety of restaurants and pubs.