Bavaria: Head for the hills to hike 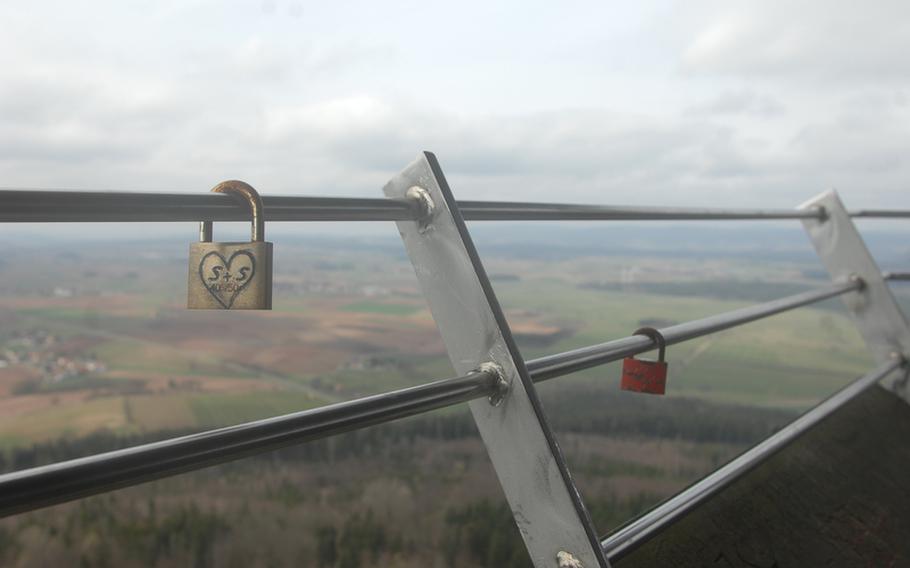 Buy Photo
A pair of engraved padlocks hangs from the viewing platform railing at Rauher Kulm, a basalt dome in Germany's Upper Palatinate region and near the military community of Grafenwöhr. (Steven Beardsley/Stars and Stripes)

Buy Photo
A pair of engraved padlocks hangs from the viewing platform railing at Rauher Kulm, a basalt dome in Germany's Upper Palatinate region and near the military community of Grafenwöhr. (Steven Beardsley/Stars and Stripes) 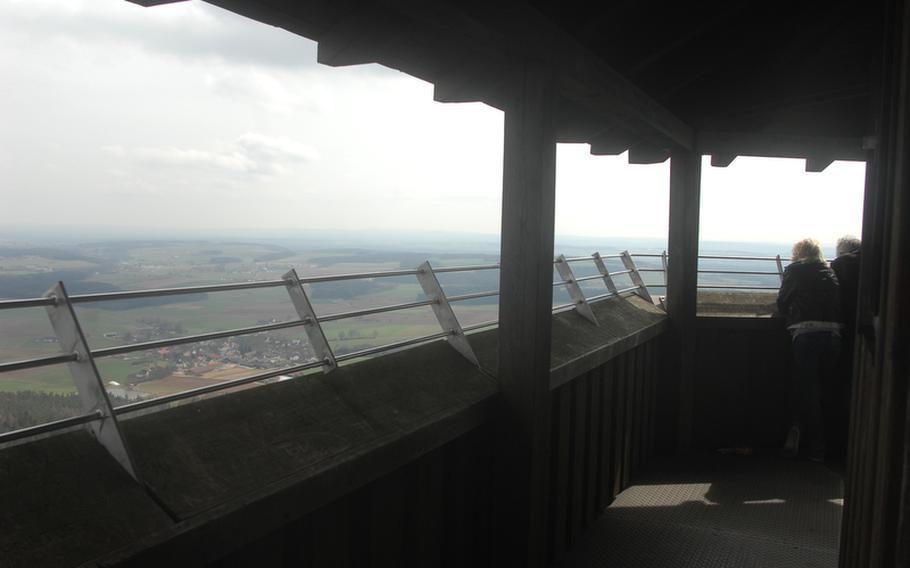 Buy Photo
Visitors look out from the viewing platform on the tower at Rauher Kulm, a large basalt dome in Germany's Upper Palatinate region. A visit to the dome makes for a worthy day trip from the military community of Grafenwöhr. (Steven Beardsley/Stars and Stripes) 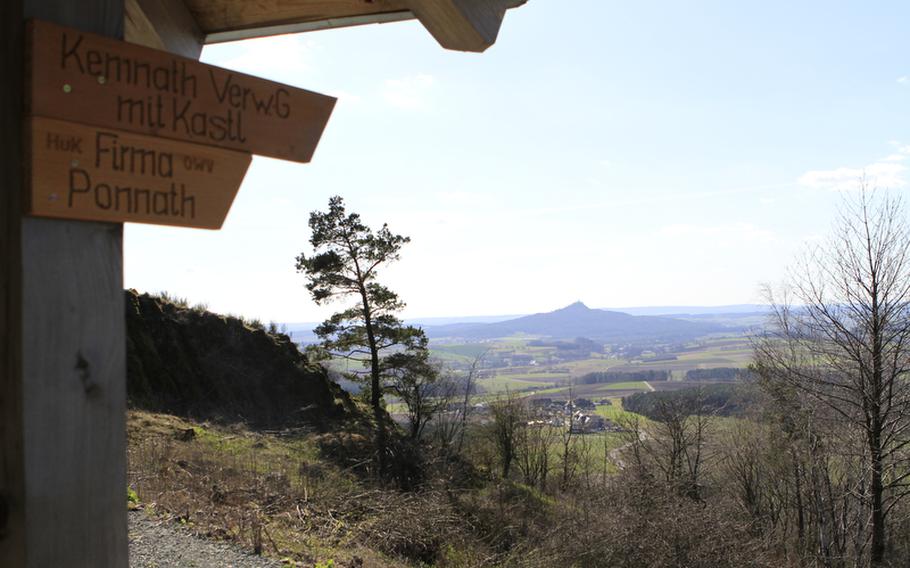 Buy Photo
A view from a pavilion near the Burgruine Waldeck (castle ruins at Waldeck) in the Upper Palatinate region of Germany. (Steven Beardsley/Stars and Stripes) 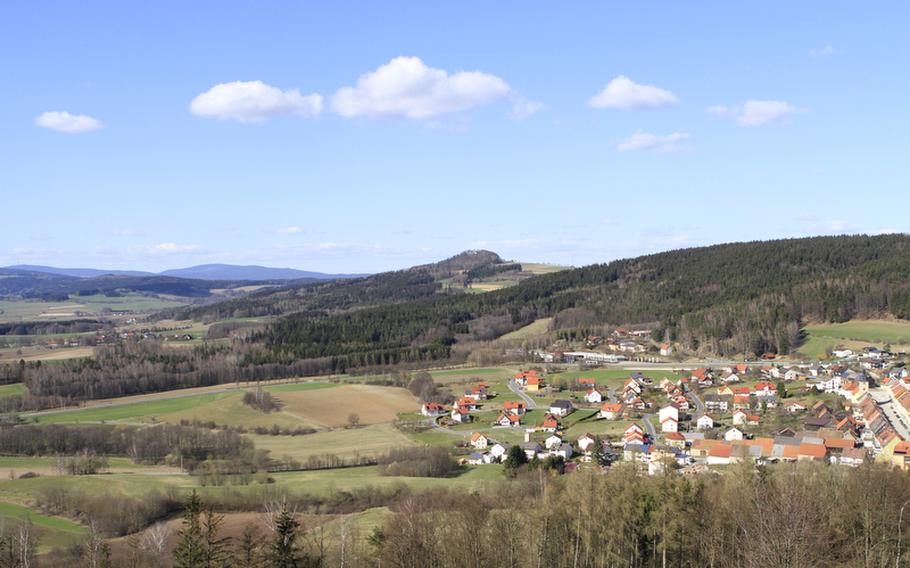 Buy Photo
A view of the community of Waldeck, Germany, from the nearby castle ruins. Hikes to the castle ruins and the landmark Rauher Kulm mountain are perfect day trips for those coming from the Grafenwöhr area. The hikes combine a bit of geology, some history and a closer look at nature. (Steven Beardsley/Stars and Stripes) 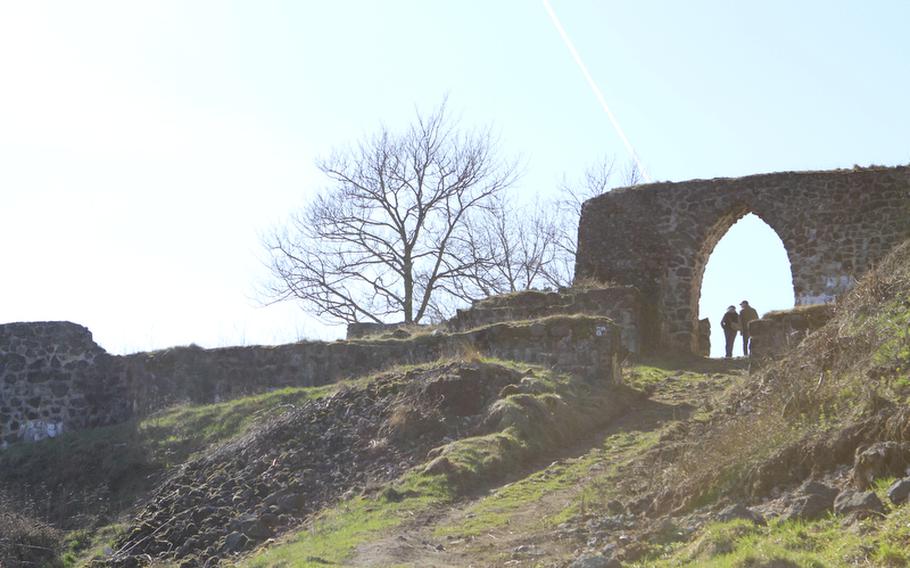 Buy Photo
A couple walks beneath an arch at the Burgruine Waldeck (castle ruins at Waldeck), which date to 1124 in Germany's Upper Palatinate region. According to a poster at the site, it is one of the oldest castles in the state of Bavaria. (Steven Beardsley/Stars and Stripes) 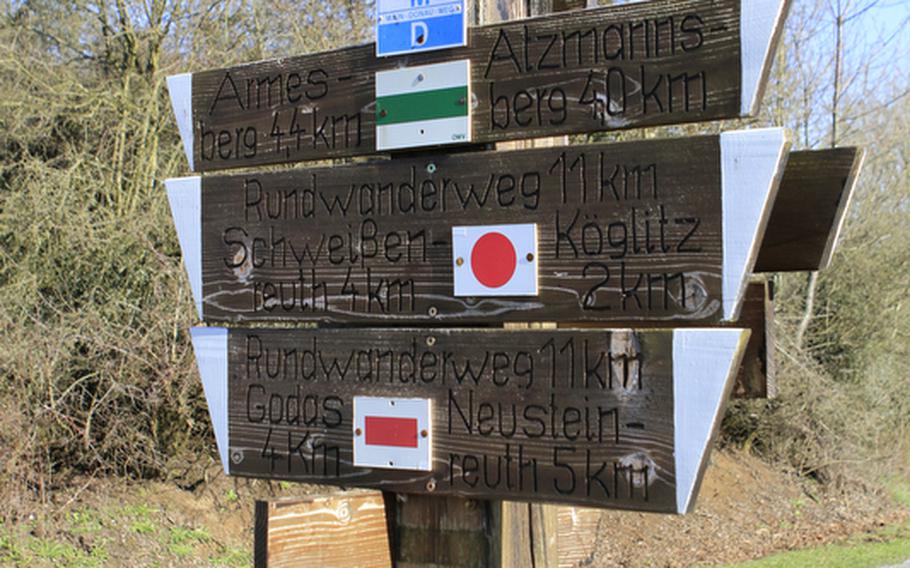 Buy Photo
Trails cross near the Burgruine Waldeck, a former castle site in Germany's Upper Palatinate region that dates to 1124. It's a worthy day trip from the military community of Grafenwöhr. (Steven Beardsley/Stars and Stripes) 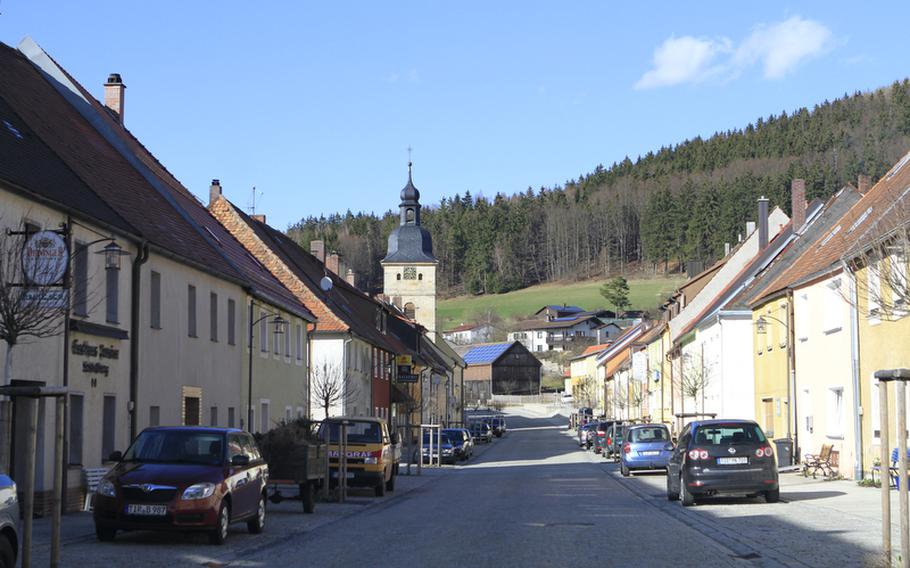 Buy Photo
The community of Waldeck, Germany, sits below the Burgruine Waldeck, a set of castle ruins dating to 1124, making it one of the oldest castles in Bavaria, according to a poster at the site. (Steven Beardsley/Stars and Stripes) 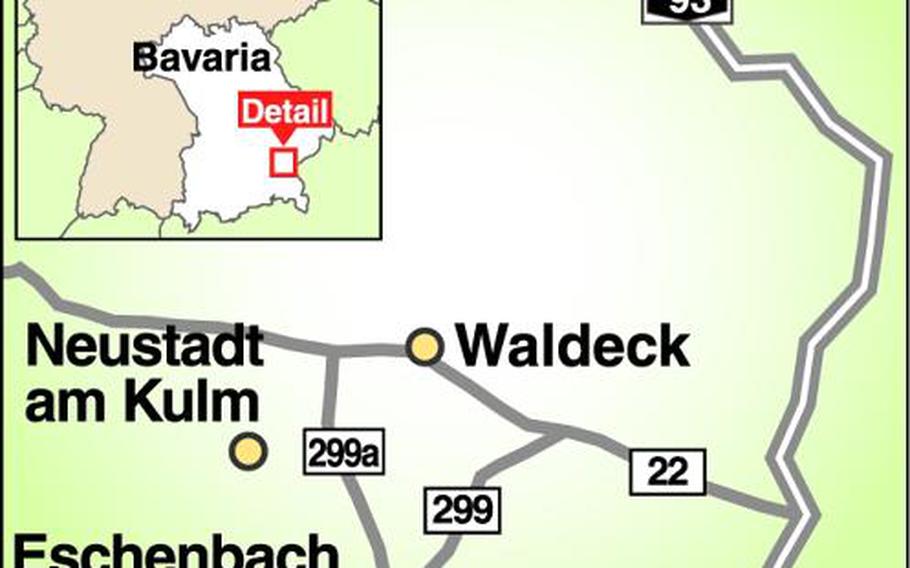 Spring is unfolding in Germany&rsquo;s state of Bavaria, bringing green fields, rich blue skies and ample reason for people here to leave their homes and explore.

Those looking for a day out might consider a pair of hikes just north of the Army post in Grafenw&ouml;hr. Both offer sweeping panoramas of the Upper Palatinate region, combined with a bit of geology, some history and a closer look at nature.

The Rauher Kulm mountain is likely a familiar sight to anyone who has driven north of the Grafenw&ouml;hr post and is visible from the Netzaberg housing community and the town of Eschenbach. An oddly shaped dome mounted by a tower, Rauher Kulm is a landmark of the region, standing a neck above the surrounding hills.

The basalt dome was formed millions of years ago from a magmatic fissure deep within the earth, according to a poster on the site. Erosion of the surrounding soil through the following millennia gradually exposed the rock, which today stands nearly 2,240 feet tall.

Rauher Kulm is easily accessible and can be explored through hiking trails that go up and around the dome. Reaching the tower is a matter of climbing the Kulmsteig path, a 700-meter (roughly 2,300-foot) route of moderate difficulty. A good pair of tennis shoes and a water bottle are sufficient to make it to the top.

The path takes the climber around the dome&rsquo;s &ldquo;scree&rdquo; &mdash; an apron of boulders that have broken off the larger rock &mdash; and up the forested side to the top. Side trails lead to other parts of the site.

The views atop the tower are impressive, looking into distant hills and valleys, small villages and their outlying grids of green and brown parcels. Names and messages of past visitors are carved into the wood beams on the viewing platform. A few visitors left engraved padlocks locked around the metal bars. Signs placed on overhead beams point in the directions of near and distant cities.

A sign outside the tower advertises admission costs &mdash; 1 euro for adults, 50 euro cents for children &mdash; but I have yet to see someone collecting money, nor have I seen a drop box. The area is generally quiet, with a handful of visitors at any given time.

The views are equally as impressive at the Burgruine Waldeck (Waldeck castle ruins), set on a small basalt outcropping just east of Rauher Kulm. The first mention of the Waldeck castle in German records dates to 1124, making it one of the oldest castles in Bavaria, according to a poster on the site.

Today, only the restored foundations remain, accessed by a steep, but short, gravel road. Upon reaching the castle site, visitors can climb a staircase to explore the ruins

The area around the Burgruine Waldeck is quiet and grassy, beneath an open sky that encourages visitors to linger. Hikers can picnic, take pictures or simply enjoy the view from the stone walls or a nearby bench. Several regional hiking trails crisscross the area, and we peered into a stone cellar on the grounds during a recent visit.

Rauher Kulm and the Burgruine Waldeck are just two of many hiking options in the area. As the weather warms and the outside world beckons, both are worth a look.

On the QT:DirectionsTake road 2168 from the center of Eschenbach north to the town of Neustadt am Kulm, a drive of about 10 minutes. Follow signs to Rauher Kulm and park in the dirt lot. The Burgruine Waldeck is another 15 minutes or so northeast. From Rauher Kulm, return to road 2168 north and take a right onto the TIR 30 road, which continues as Reuther Strasse and takes a right in L&ouml;schwitz. Follow Reuther Strasse onto K&ouml;glitzer Strasse and continue on to Oberer Markt. Turn right at Am Schlossberg and follow the signs to the ruins. Park along side the road or in a small lot near the cemetery.

TimesIt&rsquo;s best to visit the sites during daylight hours.

CostsAlthough a sign indicates an admission charge at Rauher Kulm, there was no one collecting money and there was no drop box. There&rsquo;s no admission to visit the Burgruine Waldeck.

FoodThe adjacent town of Waldeck offers several restaurants and butcher shops as food options. The somewhat larger town of Kemnath is minutes away on Highway 22.

InformationBetween Eschenbach and Neustadt am Kulm, find the Kloster Speinshart, an impressive monastery in a n otherwise small village: www.kloster-speinshart.de/. Consider taking scenic Highway 22 through Weiden while going to or returning from the Burgruine Waldeck. Marked by high hills and beautiful landscapes, the route is worth the extra time. From Eschenbach, take Highway 470 east to Autobahn 93, head north toward Hof and take exit 21b. At the traffic circle, head north on 22 toward Bayreuth. Waldeck is just off the highway.

Admission: Although there&rsquo;s a sign advertising admission outside the tower for the Rauher Kulm (1 euro adults; 0.50 euro cents for children), I have yet to see someone collecting in two visits to the site. Better to be prepared, though. There&rsquo;s no admission to visit the Burgruine Waldeck.

Hiking difficulty: Neither hike is especially long or strenuous, but both are uphill and will get your heart going. The path to the Burgruine Waldeck is a wide gravel road. The path up Rauher Kulm is narrower and rockier, but it&rsquo;s manageable with sneakers. Children should be able to handle either with no problem.