An acquired taste: Sampling the specialty at an apple wine tavern in Frankfurt A glass of apple wine at Zum Gemalten Haus, the popular apple wine tavern in the Sachsenhausen district of Frankfurt, Germany. (Michael Abrams/Stars and Stripes)

When you think about drinking in Germany, beer is of course the first thing that comes to mind. And the country is known for its wine, especially riesling, made from the grapes growing in the Rhine River valley.

But in Frankfurt and its surroundings, a popular drink is apple wine. Tart, slightly sour and bitter, apfelwein, as it is called in German, is an acquired taste for many.

In the apple wine taverns of Sachsenhausen, the Frankfurt district south of the Main River, it is the drink of choice, however.

Among the places worth trying are Frau Rauscher, Apfelweinwirtschaft Dauth-Schneider, Apfelwein Dax and, on the other side of the Main, Apfelwein Solzer. 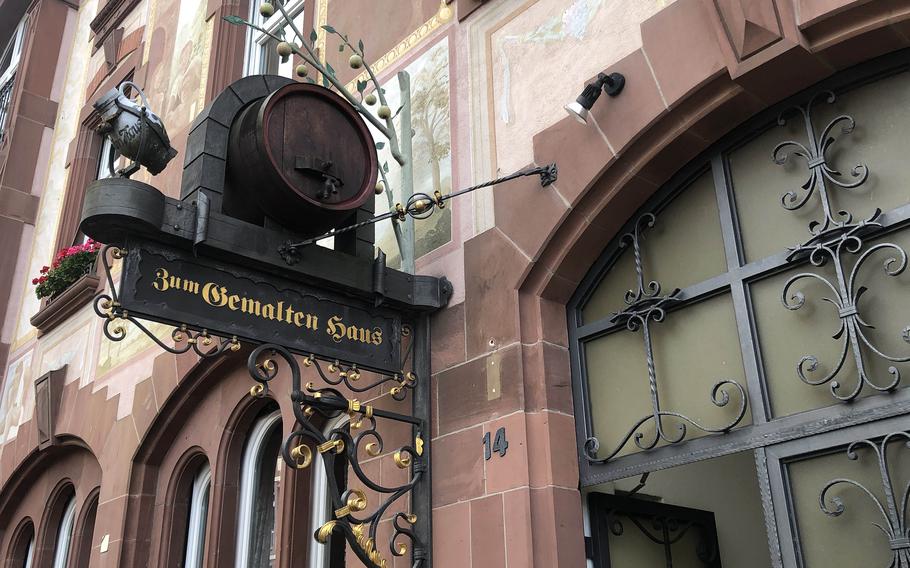 Apples, a barrel and a bembel, the pitcher apple wine is often served from, hang above the door on Diesterwegstrasse to the popular apple wine tavern Zum Gemalten Haus. Its main entrance is on Schweizerstrasse. (Michael Abrams/Stars and Stripes)

On Schweizerstrasse, a street that cuts through the heart of Sachsenhausen, are two of the best-known taverns: Adolf Wagner and Zum Gemalten Haus. On a recent Sunday, we headed to the latter for lunch and a couple of glasses of apfelwein.

Inside, there is a lot of wood. Tables, chairs, benches and floors, all wooden. The walls are hung with the paintings that give the tavern its name, meaning “painted house,” most depicting scenes of old Sachsenhausen life. The outside courtyards are also colorfully decorated.

We sat at a long wood table and ordered apple wine; straight (pur) for me, spritzed with mineral water (sauergespritzte) for my wife. Our granddaughter had spritzed apple juice (schorle). A painting of a couple dancing to the music while enjoying apple wine is one of many large artworks adorning the walls of Zum Gemalten Haus, or painted house, in Frankfurt, Germany. Note the pitcher, called a bembel, and the glasses of apple wine. (Michael Abrams/Stars and Stripes)

My beverage was delicious. Served in a traditional geripptes, a glass with diamond-shaped designs in it, the ebbelwoi, as it is known in the Hessian dialect, was golden in color and tart in taste. German apple wine usually has about 6% alcohol by volume, making it light and refreshing.

Then we studied the menu. A lot of meat: pork, beef, veal, much of it salted and/or smoked and boiled and served with sauerkraut. Additionally, a variety of sausages, of course, and a couple of vegetarian dishes. 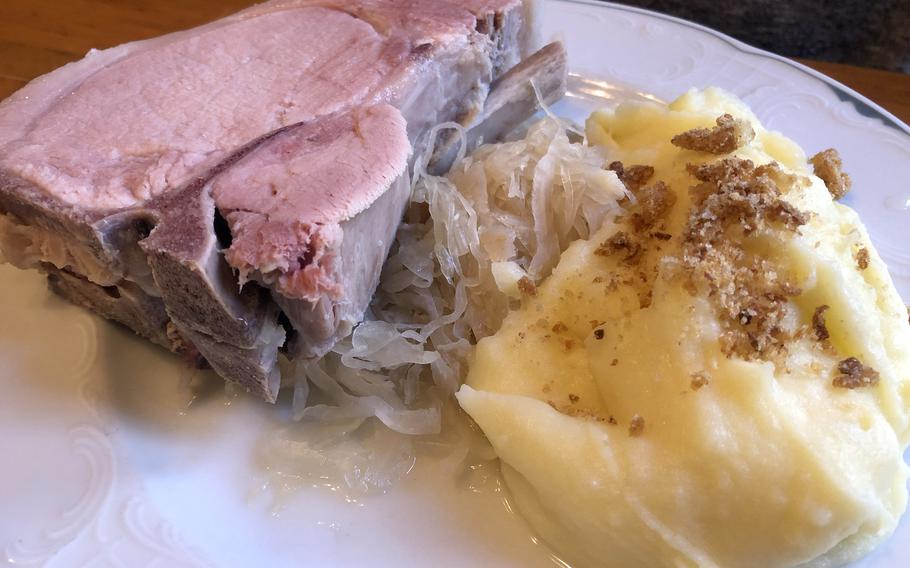 Frankfurter Rippchen, a cured, cooked pork chop, as served at Zum Gemalten Haus in Frankfurt, Germany, with sauerkraut and mashed potatoes. You can also order it grilled at the popular wine tavern in the Sachsenhausen district. (Michael Abrams/Stars and Stripes)

The little one isn’t fond of the fermented cabbage, so we got her a side of fried potatoes. Her grandfather is, though, and seeing that I didn’t get it with my meal, I happily ate hers. 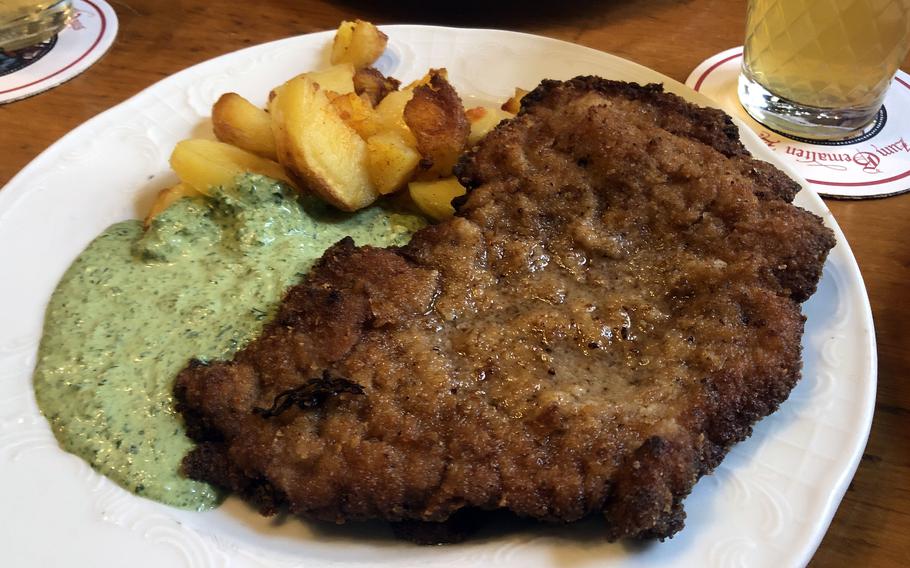 The food was good and solid. I’m not sure where the Frankfurt part of the schnitzel’s name comes from, as it was very similar to Wiener schnitzel. The derivation of the name of the delicious green sauce, on the other hand, is clear.

The herbs in it — always at least seven and usually borage, chervil, cress, parsley, salad burnet, sorrel and chives — must be grown in or around Frankfurt for the sauce to merit the eponymous word in its name. A pair of frankfurters served on sauerkraut and a side of fried potatoes at Zum Gemalten Haus in Frankfurt, Germany. To be called a Frankfurter wuerstchen in Germany, the thin, slightly smoked pork sausages must be made in Frankfurt and its surroundings. (Michael Abrams/Stars and Stripes)

The same goes for the frankfurters. The thin, lightly smoked pork sausages must be made in Frankfurt or its surroundings to be called that in Germany.

The ones served to my granddaughter tasted good and had that nice snap when we bit into them. Our fried potatoes were to our liking, brown on the edges, crunchy and not too greasy.

The pork chop was a thick slab of meat, delicately cured and quite delicious, although my wife said the center was a little dry. Dipping it in some good German mustard did the trick.

The sauerkraut tasted, well, like sauerkraut: slightly sour and tangy, but good.

At the end of the meal, our plates were empty and we were satisfied but too full for dessert. Maybe next time. 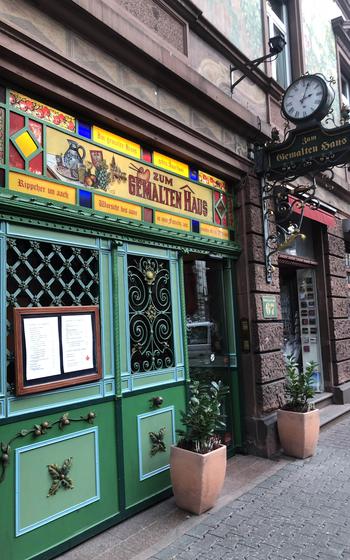 The main entrance to the popular apple wine tavern Zum Gemalten Haus on Schweitzer Strasse in the Sachsenhausen district of Frankfurt, Germany. (Michael Abrams/Stars and Stripes)

Prices: From 5.50 euros for a goulash soup to 21.80 euros for a veal Frankfurter schnitzel with Frankfurter green sauce and fried potatoes. A glass of apple wine is 2.70 euros, while a bottle of beer starts at 3.30 euros. Apple juice is 3.10 euros and cola is 2.90 euros. There is a weekly menu with daily specials that is also worth looking at.