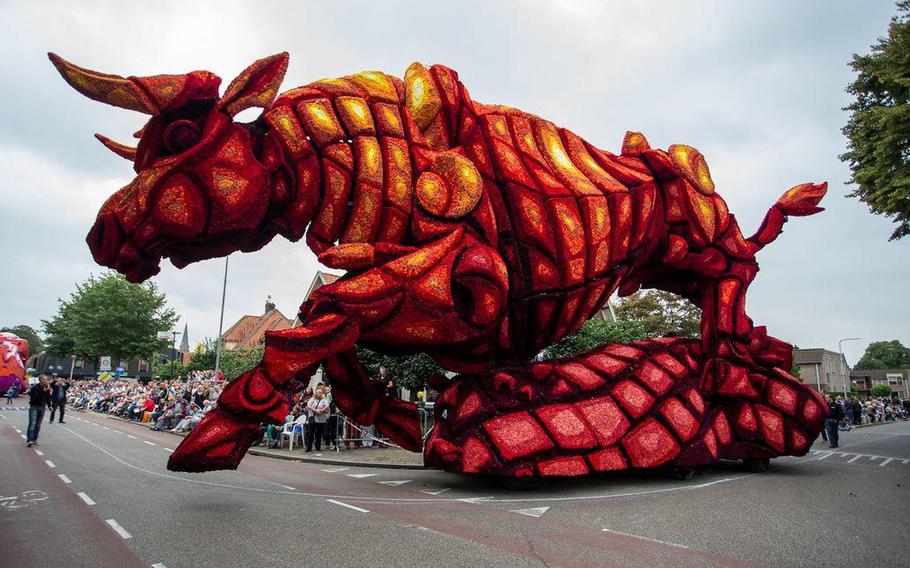 Every second Sunday in September, the Dutch city of Lichtenvoorde hosts an impressive parade with floats decorated with four million dahlias. This year's event happens Sept. 8. (Courtesy of bloemencorso.com)

Buskers FestivalLocation: Karlsplatz, Vienna, AustriaDates: Sept. 6-8 (2 p.m.-10 p.m. daily) Clowns, jugglers, acrobats, graffiti artists, musicians, dancers, fire-eaters and other entertainers astound and amuse. Many acts seek out the active engagement of their spectators, who in turn become an essential part of the show. An urban setting in one of the busiest areas of the city adds to the character of the event.Admission: Entry is free, but be sure to tip the artists accordingly.

Belgian Beer WeekendLocation: Grand-Place, Brussels, BelgiumDates: Sept. 6-8 (6 p.m.-10 p.m. Sept. 6; 11 a.m.-9 p.m. Sept. 7; 11 a.m.-8 p.m. Sept. 8) A professional union of Belgian brewers is the force behind this festival serving as a showcase for quality beers from throughout the land. Both small brewers and the big names are on site to serve up their varied and tasty creations. Six Trappist breweries are also among those represented. From 10 a.m. Sept. 7, a display of historical brewery carts and beer wagons is set up at the Nouveau Marché aux Grains.Admission: Free; pours of beer are purchased by means of tokens available on site.

Eat! BrusselsLocation: Parc de Bruxelles, Brussels, BelgiumDates: Sept. 5-8 (noon-11 p.m. daily except Sept. 8, when it closes at 8 p.m.) Once pop-up kitchens are set up in a park, top chefs from Brussels take over to whip up an interesting selection of their signature dishes. Bordeaux wines make the perfect accompaniment to the culinary treats, while dessert rounds out the experience. A total of 28 chefs, four pastry chefs and four cheesemakers take part in this year’s edition. Visitors can also sample tastes of the world at the International Village, where areas represented include Brazil, Budapest, Beijing, Seoul, Sofia, Szechuan Province and other regions.Entry: Free; payment is completed by means of purchasing credits added to a magnetic card. One credit costs 1 euro, and signature dishes cost 9 euros. A separate card is needed to taste the Bordeaux wines; wine passes go for 20 euros on site; there’s also a 6 euro deposit on the wine glass. Refunds are possible.

Tag des Offenen Denkmals/ Open Monuments DayLocation: Countrywide, GermanyDate: Sept. 8 On the second Sunday of September each year, historical sites throughout Germany throw open their doors to offer visitors a peek inside. Participating venues include churches, industrial sites, castles, parks, archaeological sites and other spaces. Some 8,000 monuments will be opening their doors in this year’s edition, which marks the 100th anniversary of the Bauhaus movement with the theme “Modern: upheaval in art and architecture.” Guides, volunteers, archaeologists, restorers and craftsmen are on hand to lead tours and answer questions. To see what’s open in your area, pull up the interactive map on the event website and click on the icons.Admission: varies by landmark; many may be visited free of charge.

Dublin Fringe FestivalLocation: Dublin, IrelandDates: Sept. 7-22 This multidisciplinary arts festival celebrates its 25th anniversary with a program offering 80 productions and 545 performances, including 54 world premieres, across 36 venues. For many of the shows, the setting itself tells part of the story, so look for performances in unusual spaces from an ice rink to a Gothic chapel. This year’s theme focuses on power and pleasure.Admission: some events offer free admission, but tickets are required for most performances.

Chianti Classico ExpoLocation: Greve in Chianti, ItalyDates: Sept. 5-8 The popular dry red wine known as Chianti Classico is produced in a specific geographical area of Tuscany and is easily recognized by its Black Rooster trademark. Stands set up in Piazza Matteotti give wine lovers the chance to sample this tasty wine in its natural setting. Evening concerts, an artisans market on Sept. 7, a flag wavers' parade at 4:30 p.m. Sept. 8, and guided tours of the area also feature on the program.Admission: Free

World Port DaysLocation: Wilhelminakade and other waterfront areas, Rotterdam, NetherlandsDates: Sept. 6-8 Those who dream of maritime adventure will enjoy a look at the inner workings of Europe’s largest harbor. Spectacular demonstrations on water, impressive ships and insightful port excursions are accompanied by entertainment in the form of music and fireworks. From 9 p.m. Saturday, the Erasmus Bridge will be turned into the site of a massive dance party.Admission: Free

Bloemencorso LichtenvoordeLocation: Lichtenvoorde, NetherlandsDates: Sept. 8-9 (parade begins at 2 p.m. Sept. 8) It takes some four million dahlias and many selfless volunteers to decorate the fantastical and colorful floats taking part in the parade, which traverse a course nearly two miles long through the town. Once the parade ends at about 4:30 p.m., the illuminated floats go on display in a special exhibition area. On Monday morning, following an awards ceremony, the parade retraces its route, and the exhibition area is open noon-10 p.m.Admission: Entry to the parade on Sept. 8 costs 7.50 euros for adults and is free for children ages 15 and under. Grandstand seating costs an additional 7.50 euros per person, but the parade can be viewed from other vantage points as well. Entry to the exhibition area costs 2.50 euros adults and is free for children.

CascamorrasLocation: Baza and Guadix, SpainDates: Sept. 6 and 9 (6:30 p.m.-8:30 p.m.) In this fiesta dating back to the Middle Ages, the residents of two towns re-enact a traditional battle for possession of a statue of the Virgen de la Piedad. On Sept. 6, a clown dressed in special attire makes his way from Guadix to Baza. Should he manage to reach the statue remaining clean, he can claim it for his town. As he’s pelted with eggs, flour and black olive oil by Baza’s residents, he is destined never to succeed in his objective. On Sept. 9, the spectacle continues in Guadix, where covering oneself and others with paint is all part of the ritual.Admission: Free