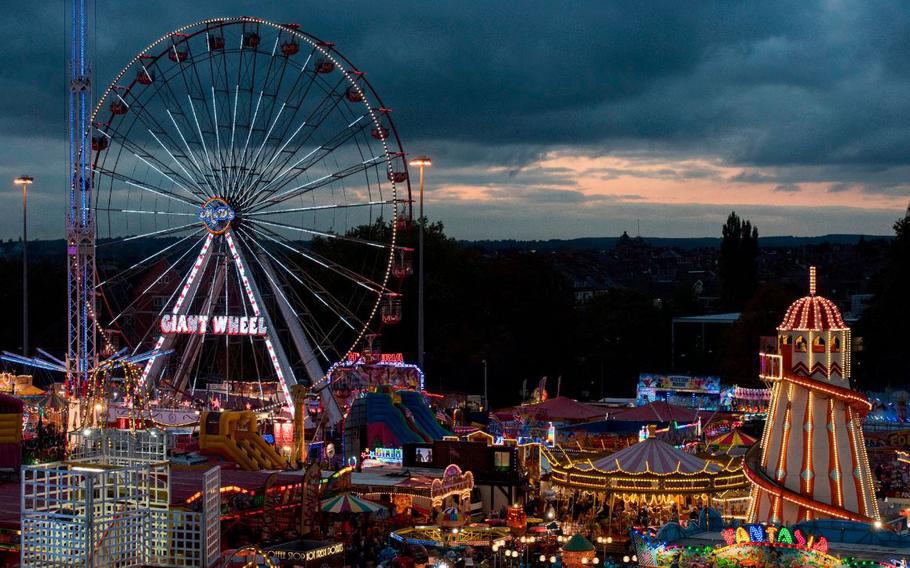 The Goose Fair in Nottingham, England, has the usual revelry, plus special "treats" such as mushy peas. The fair runs Oct. 2-6. (Nottinghampost.com)

Location: Open Air Museum Salzburg, Hasenweg 1, 5084 Grossgmain, AustriaDates: Oct. 5-6 Old-fashioned fun in the form of traditional games of chance, rides and treats awaits visitors on the beautiful grounds of an open-air museum. Lovers of quality handicrafts can pick up goods from knitwear to ceramics to wooden carvings and see their makers in action.Admission: 11 euros adults, 5.50 euros students and free for those under the age of six.

Location: Boomgaardstraat 17, Antwerp, BelgiumDates: Oct. 5-6 (11 a.m.-7 p.m. both days) Beer lovers will appreciate the chance to sample the many specialty beers on hand here, the tasty output of more than 25 small-scale and family-run operations. Many of the brewers themselves will be present in the venue, a covered hall.Admission: Free; sampling glasses cost 5 euros and pours cost 1-2 euros.

Location: Grand’Place, Mouscron, BelgiumDate: Oct. 6 This three-day festival held on the first weekend of October each year recalls the Protestant rebels known as Hurlus, who were based in Mouscron in the 16th century. Festivities peak on Sunday with a historical parade involving several larger-than-life effigies (from 2:30 p.m.) and the tossing of dolls representing the Hurlus from a platform in the main square into the waiting crowds (6:30 p.m.).Admission: Free

Location: Forest Recreation Ground, NG7 6HB, Nottingham, EnglandDates: Oct. 2-6 A highlight on the city’s annual calendar of events is this traveling funfair which has been pulling in visitors for the past seven centuries. In addition to its traditional and high-tech thrill rides, attendees relish the chance to devour the event’s signature dish of mushy peas.Admission: Free

Location: Neustadt an der Weinstrasse, GermanyDates: Oct. 2-14 The Pfalz wine-growing area celebrates the conclusion of its grape harvest season with a wine festival and fun fair rolled into one. Visitors can sample local wines and culinary specialties of the region rain or shine in the cozy little stands of the “Haiselscher” wine village. Attractions and games of chance set up in front of the train station appeal to the younger set.Admission: Free

Location: Tuebingen, GermanyDate: Oct. 5 It’s a race for first to the finish between thousands of rubber ducks tossed simultaneously into the Neckar River. Each duck bears a number, and the first ones to cross the finish line net their owners prizes. Those wishing to get in on the action pay 5 euros to rent a duck to compete in the race. Proceeds benefit local charities. The race begins at Alleenbrücke at 2 p.m., and the ducks take about 45 minutes to reach their goal. Winners are announced at around 3:15 p.m.Admission: Free

Location: Waterfront and historical center, Bardolino, ItalyDates: Oct. 3-7 The town that gives its name to the tasty light red wine produced on the shores of Lake Garda celebrates the bounty of its grapes with a festival offering tasty regional cuisine, craftsmen in medieval costume selling their handiworks, folklore and more.Admission: Free

Location: O Grove, SpainDates: Oct. 3-13 Locally caught fish and shellfish are the star attraction at this annual festival in Galicia in northwest Spain. The dishes are prepared by residents of the town according to traditional recipes. The eating of clams, scallops and other locally caught specialties is complemented the sounds of traditional folk and bagpipe music.Admission: Free

Location: Lugano, SwitzerlandDates: Oct. 4-6 This mountain-ringed city on the banks of Lake Lugano makes a striking backdrop for a celebration of the harvest season. Visitors will enjoy sampling the wines of the region, tasting local cuisine including risotto and polenta, listening to folklore groups, or shopping at a market or locally produced foods and handicrafts.Admission: Free