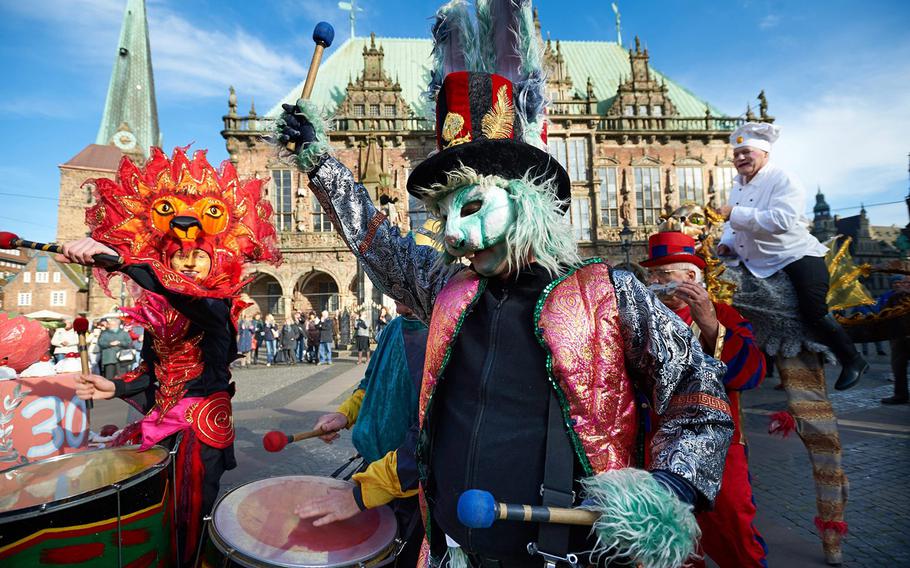 The Samba Carnival in Bremen, Germany, attracts around 35,000 visitors each year for Saturday's Grand Parade. (Courtesy of Norbert A. Mueller)

Streif Vertical UpLocation: Red Bull Restaurant, accessed by Hahnenkamm Lift, Kitzbuehel, AustriaDate: Feb. 23 (starts 6:30 p.m.) Who’s got what it takes to be quickest to the top of the mountain? In this unusual race, any means make one’s way to the top, be it skis, snowshoes or clamps, is a fair fight. The person first to conquer the imposing “Streif” slope from the bottom up and with a net gain of 2820 feet is declared the winner. Top finishers must exhibit endurance and choose the best technique for the conditions on that particular day. Participants can opt for either a speed or family version, in which they must carry a rucksack. Many costumed participants make the race a pleasure to watch as well.Admission: the special fare up the lift for spectators is 15 euros round trip. The lift runs 4 p.m.-9 p.m.

Accordion FestivalLocation: Vienna, AustriaDates: Feb. 23-March 24 This festival celebrates the diversity of the accordion, an instrument which finds its way into both high and popular culture and Viennese, folk and world music. A series of twenty packed programs are performed by masters in their respective genres. On Sunday afternoons, silent films are shown to the accompaniment of live performances of a soundtrack. Accordion workshops round out the offerings.Admission: Ticket prices begin at 21 euros.

art KARLSRUHELocation: Messe Karlsruhe, Messeallee 1, RheinstettenDates: Feb. 21-24 Classic modernism and contemporary art meet up as more than 200 international galleries and solo artists present their best works. This year’s special exhibitions include post-1945 concrete art and graphic prints. Children under five can enjoy painting activities in the foyer.Admission: tickets costs 20.50 euros when bought in advance or 23 euros at the door; children ages 11 and under enter for free.

Samba CarnivalLocation: Bremen, GermanyDates: Feb. 22-23 Germany's biggest samba carnival takes place in Bremen. Bright colors, flamboyant costumes, fanciful masks, stilt walkers and the unmistakable beat of the drums almost convinces the some 35,000 visitors who turn out in a typical year they’re in Rio rather than northern Germany. More than 100 samba groups from Germany and beyond take part in Saturday’s grand parade, which gets underway from 12:20 p.m.Admission: Free to view the parade, admission to the parties is charged.

Delft Blues FestivalLocation: Delft, NetherlandsDates: Feb. 22-24 Each year in mid-February, this medieval gem of a city best known for its blue pottery hosts a blues festival in some 40 of its numerous cozy pubs and other venues. More than 70 concerts and musical events, a film screening, two theater performances, and a Gospel and harmonica workshop pepper the official program.Admission: Free

Jerez FestivalLocation: Teatro Villamarta and other venues, Jerez de la Frontera, SpainDates: Feb. 22-March 9 Flamenco, which refers to not only dance but song and guitar performances as well, is considered one of Spain’s national art forms. It originated and continues to thrive in the south of Spain, particularly in Andalusia. Jerez celebrates this traditional form of music with concerts performed by both local talents and world-class performers in the city’s main theater and the flamenco clubs known as peñas. Communal dance classes also make up part of the program.Admission: Ticket prices begin at 15 euros.