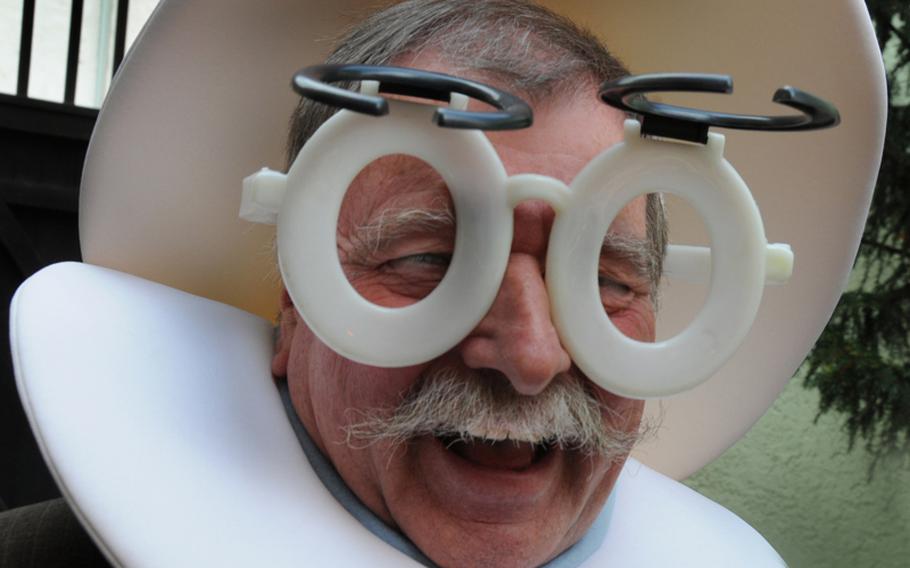 Buy Photo
Michael Berger, curator of the Klooseum, in his museum costume: toilet seat collar and glasses. He invented and created the so-called toilet museum. (Peter Jaeger/Stars and Stripes)

Buy Photo
Michael Berger, curator of the Klooseum, in his museum costume: toilet seat collar and glasses. He invented and created the so-called toilet museum. (Peter Jaeger/Stars and Stripes) Buy Photo
A life-size sculpture of a toilet care-taker in former East Berlin's TV tower toilet now guards a crazy collection of toilet seats in the stairwell of the Klooseum. The sculpture was the work of an artist from the former East Germany. (Peter Jaeger/Stars and Stripes) 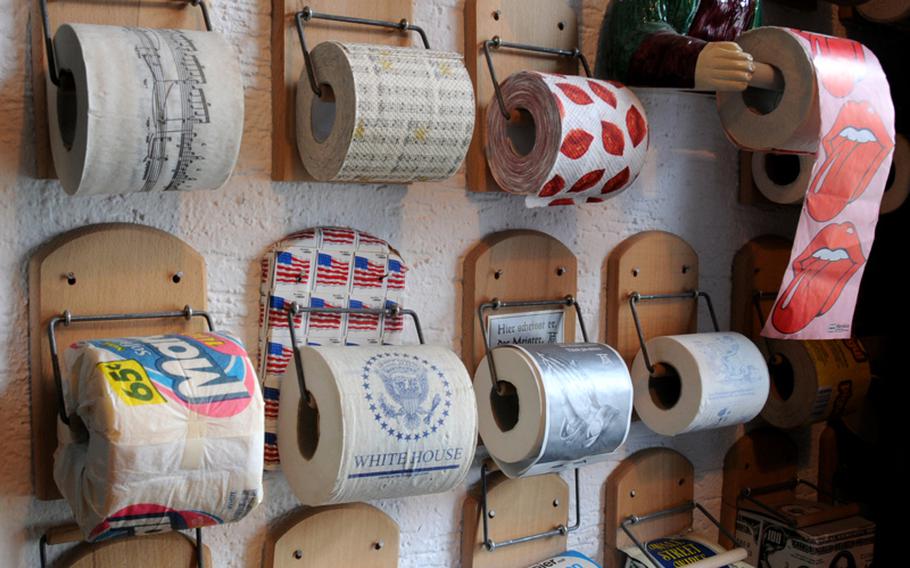 Buy Photo
Visitors are guided into the museum through a curved tunnel representing intestines and are greeted by an antique anatomic torso. (Peter Jaeger/Stars and Stripes) Buy Photo
A highlight of the Klooseum is this replica of an antique triple-seater. (Peter Jaeger/Stars and Stripes) Buy Photo
A display of knitted toilet-paper covers at the museums. Germans used to display the fancy and colorful covers in the rear window of their cars. (Peter Jaeger/Stars and Stripes) Buy Photo
Visitors can brush up on the humorous aspect of toilets at the Klooseum in Erbenheim, Germany. (Peter Jaeger/Stars and Stripes) 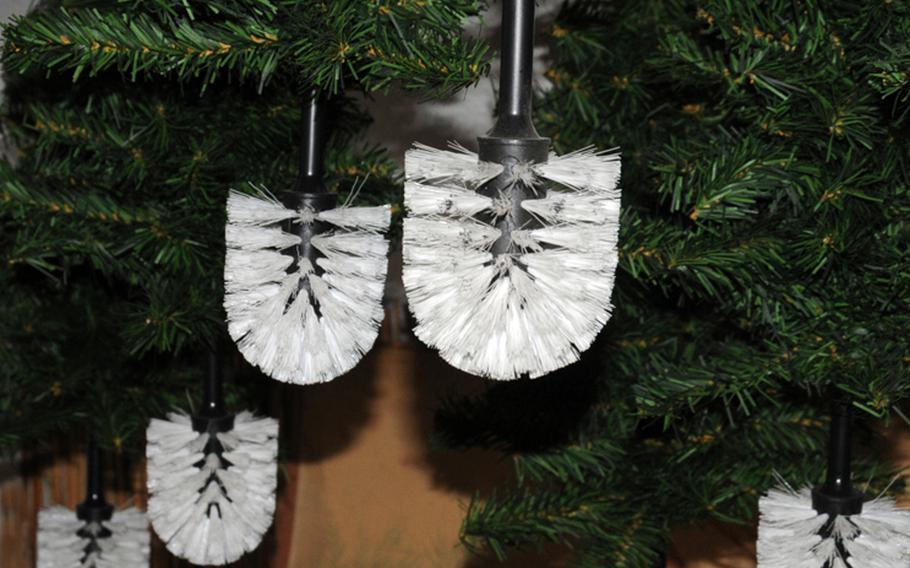 Buy Photo
What else but toilet brushes would decorate pine trees at the Klooseum? (Peter Jaeger/Stars and Stripes) 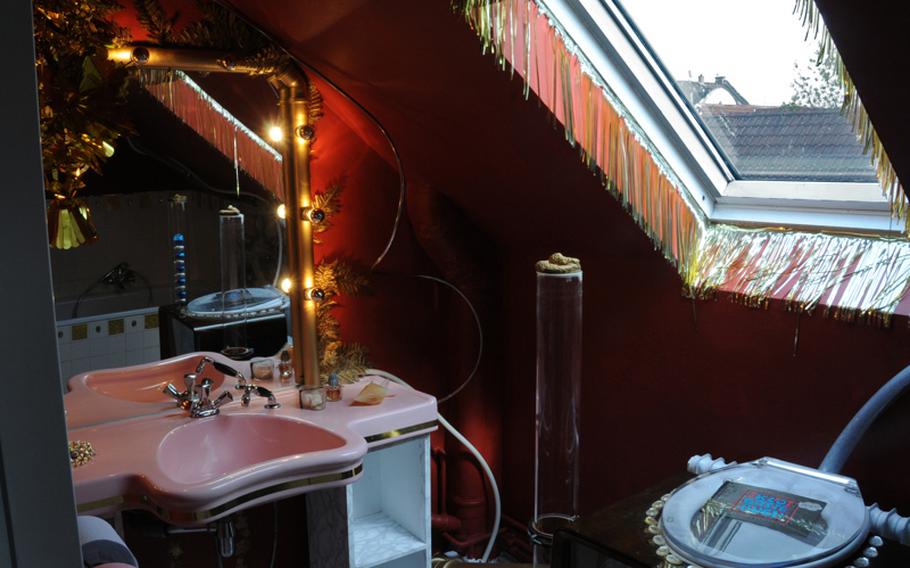 Buy Photo
The (really working) visitors' toilet at the Klooseum could be out of Alice's Wonderland. (Peter Jaeger/Stars and Stripes) 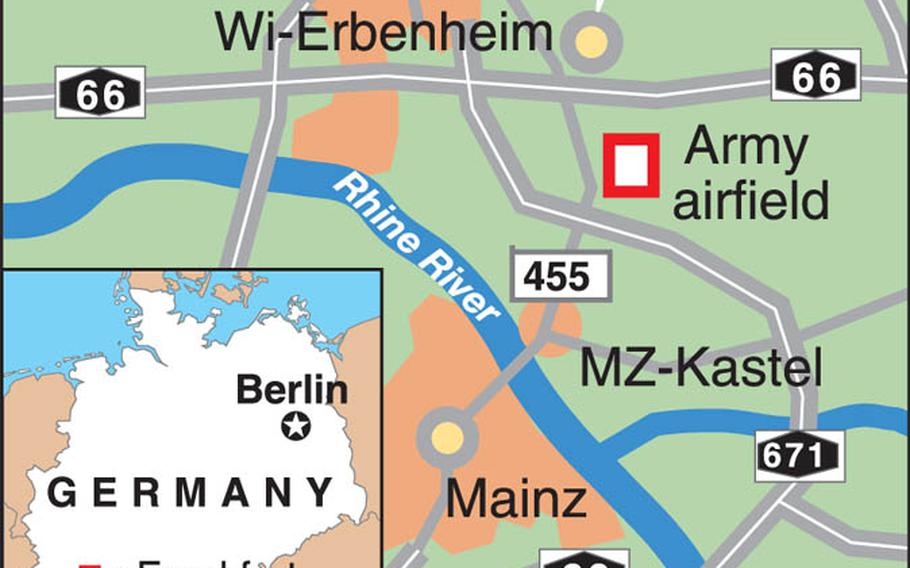 This museum isn&rsquo;t for everybody, though everybody can relate because every body in this world with a heartbeat adheres to the same force of nature.

Now, this review could flow in any number of directions. Perhaps it is best just to let things flush forth with humor and humility.

&ldquo;We make funny things,&rdquo; said Michael Berger, the curator, creator and czar of the Klooseum, a museum in Erbenheim, Germany, devoted to defecation and urination.

In German, Klo is slang for the john, the loo and, well, you get the point.

The English language is replete with genteel words and phrases relating to the process and the accessories that make it possible. We call the settings in which the process unfurls restrooms, water closets and a host of other things. Obviously, some terms are rather nasty &mdash; and we haven&rsquo;t even gotten around to the process itself.

&ldquo;Nothing is holy for me,&rdquo; Berger said before ascending a flight of stairs toward a wall covered with rolls of toilet paper, many graced with irreverent jokes and likenesses. &ldquo;I have more humor than most people.&rdquo;

The Klooseum is in a house in downtown Erbenheim, a town adjacent to Wiesbaden Army Airfield. Berger recently took a trio of visitors on a private weekday tour of his museum, which is normally in operation only on Sundays. It opened to the public a few weeks ago.

Upon entering, visitors follow a path that snakes through a series of identical yellow cutouts dangling from the ceiling. This is to simulate the passage food takes when digested.

Visitors then move from room to room, each dedicated to the end result. Along the way there are sound effects, ranging from stomach or intestinal flatulence to toilet flushes. Some people may find it all a bit crude, while others will have a gas passing among the tract of collectibles Berger has spent six years amassing.

A person probably could spend a whole digestive cycle circulating from one sassy display to the next. Near the entrance are quips applicable to the derri&egrave;re in 64 languages. There are toilet seats, whoopee cushions, fake excrement, a toilet-shaped bottle of eau de toilette and chamber pots, some with the handle on the inside. There&rsquo;s even a functioning toilet set inside a television console.

And that&rsquo;s only a sampling of Berger&rsquo;s wide array of accessories to the arse.

All in all this is a museum that is truly one of a kind. It even includes a gift shop with postcards of posteriors, books on buttocks and other socially sensitive items and themes to the subject.

&ldquo;It&rsquo;s all a game,&rdquo; Berger said.

FoodThe museum has no cafe or restaurant, which is probably a good idea given the subject matter. Establishments are nearby.