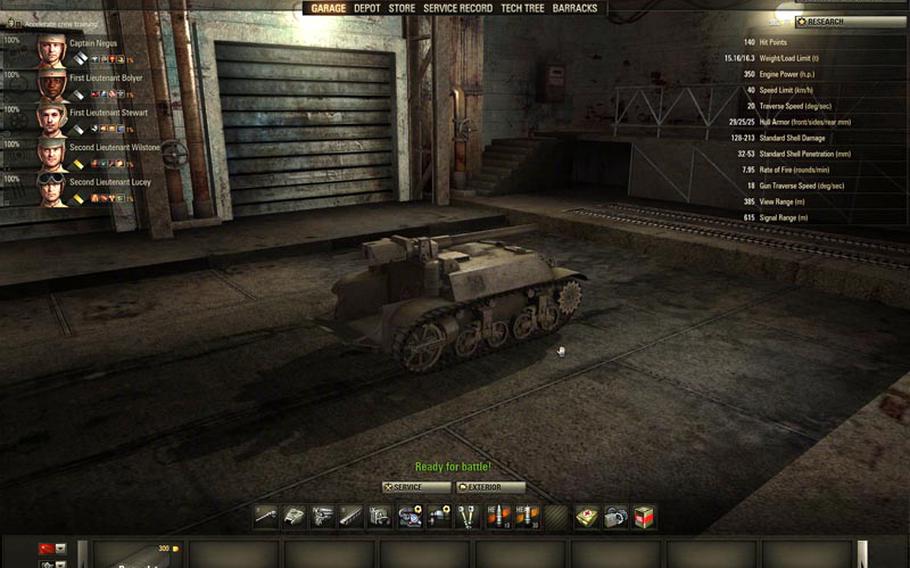 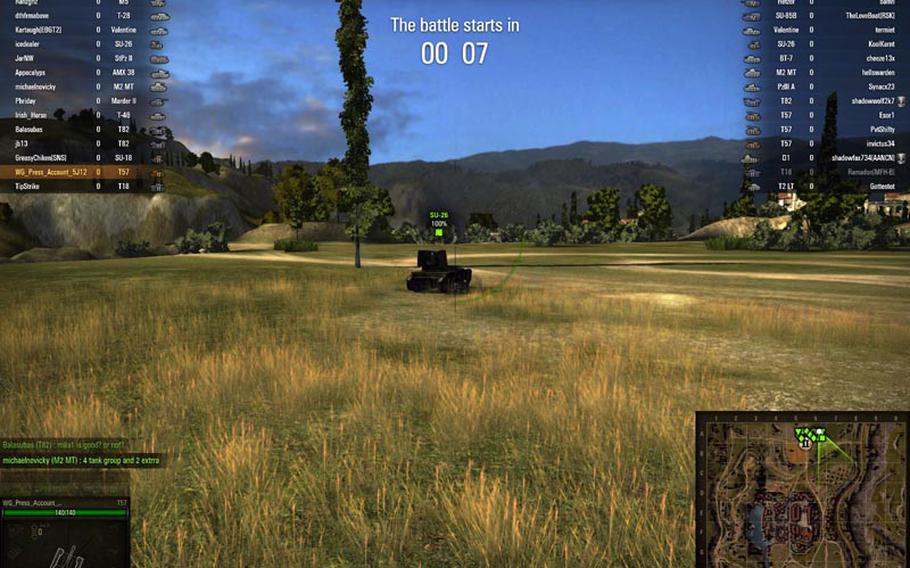 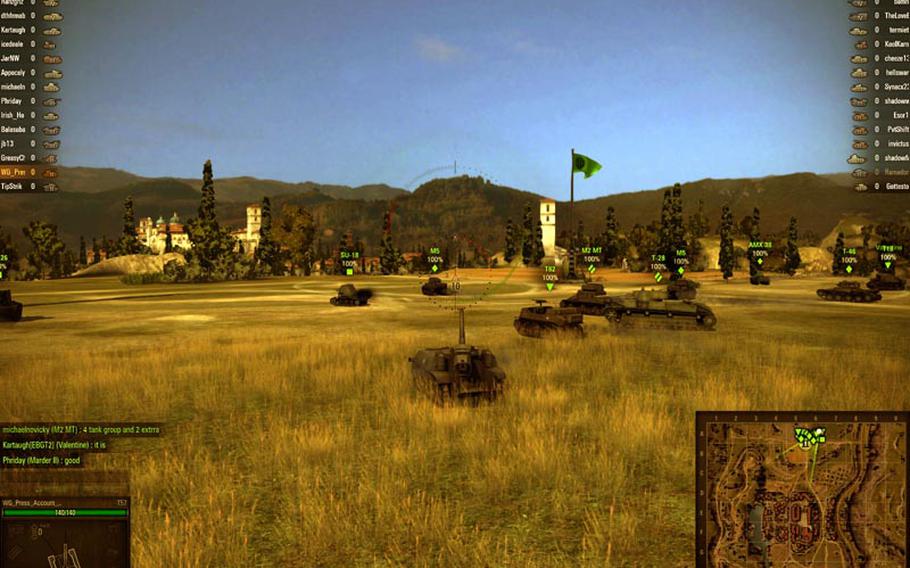 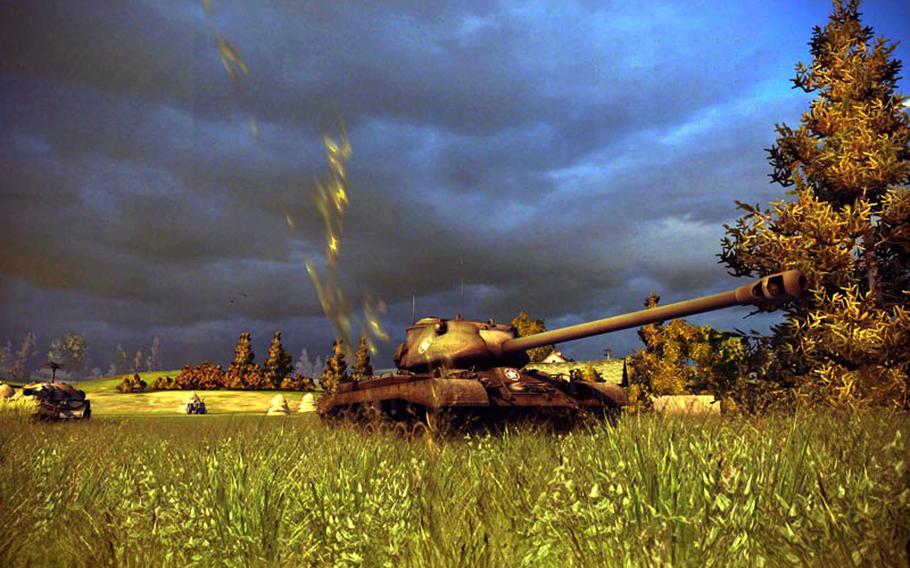 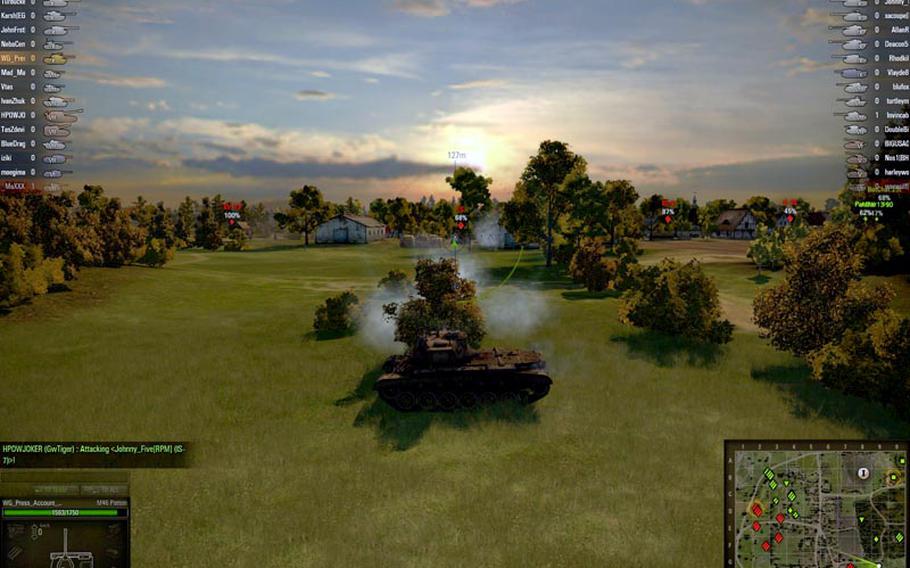 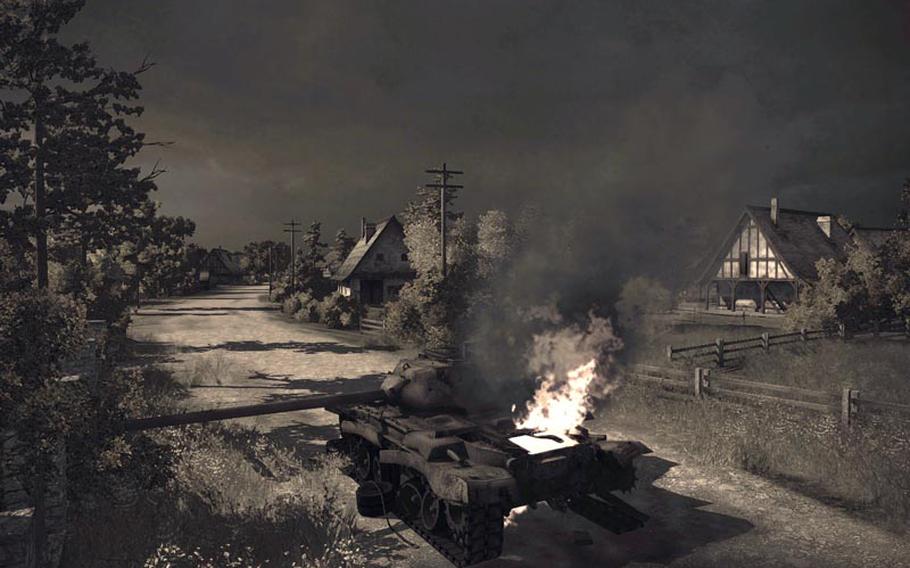 It’s an unseasonably warm spring day in Washington, D.C., and I’m sitting in an American-made SPG T57 — circa 1942 — somewhere in what must be western Europe. Hiding in some bushes, armor mostly concealed by the dense foliage, I take aim at what a few seconds ago registered as a Soviet-made MS-1 light tank.

This will not end well.

It’s moving faster than I can compensate for, and zig-zagging as it comes at me. There’s no time to double check the little details, I fire. And miss. The light tank circles me and fires at near point-blank, chinking my armor. Another shell, probably from an artillery tank like the one I’m in, explodes nearby. Soon I’m nothing but a smoldering heap of darkened metal.

Fortunately, that’s not the only tank I’ll be driving today.

I am, of course, playing the recently released “World of Tanks,” a massively multiplayer online role-playing game developed by Wargaming.net that features more than 150 historically accurate tanks from World War I to the Korean War. And if you’ve ever found yourself sitting in a field aiming the barrel of a real tank -- or even just dreaming of doing so — this game is for you.

“World of Tanks” is a game clearly developed for the history-minded gear heads among us who would like to see what would happen if an experimental French AMX 50B Heavy Tank took on a German E-75. Also invited are those who don’t really get all of the historical details, but do like to see things heavily armored things get blown up with a bit of strategery. WoT caters to both crowds incredibly well.

Still, there’s a lot of firing and missing in this game, and not just by the tanks. When I loaded up the free-to-play PC title for the first time in mid-March, I had little choice but to jump directly into the action with little direction. After a cursory review of the controls, I started the only real battle mode: a 15 on 15 skirmish, and got, well, trounced. It might seem a little obvious in retrospect, but it turns out a tank operations, specifically, good tank tactics, take a long time to learn and even longer to master. The developers have since updated the game many times, adding new tanks as well as a tutorial (hopefully it doesn’t many more updates before the tutorial stops freezing).

There’s good cause to improve, too, because WoT does things a little differently than most online multiplayer games, many of them very well. Once your tank is dead, for instance, it’s really dead. There is no respawning during matches, you have to leave and join another. But this is not a downer — in fact it’s quite the opposite. While one of your tanks is occupied, you just jump into another match with a different tank, and even if your next tank dies, you can still move on. This effectively removes any lulls from the action while also encouraging you to explore a variety of vehicles.

The shortened gap between matches is nice, because like you might imagine, things othwise move kind of slowly in World of Tanks — and not just the vehicles. Players start out with the very basics: Light tanks, with pitiful movement speeds and more pitiful armaments. That’s where the ‘rpg’ of mmorpg comes in. Want better stuff? Be prepared to put in some serious time.

After a dozen or so battles, you earn enough experience to start climbing a tank tech tree — and what a plentiful, slightly overwhelming tree it is. Four nations’ worth of tanks, split into several categories: Light, medium, heavy, tank destroyers and artillery. Each tank has equipment that needs to be researched, bought and installed, as well as a crew. On top of this, even the tank crew gains experience and skills, though at a slower rate than the tanks themselves. All of this leveling requires time and careful planning if you’re looking to get the most out of your favorite hunk of armor.

Climbing the tech tree is where the developers at Wargaming decided to balancing “free-to-play” model with the need to recoup costs. With a cash payment, you can unlock things with a mere click. It’s a nice way to way get equipment, but as anyone who has been in a real war zone can tell you — all the best equipment money can buy means nothing next to experience (well, and a bit of luck).

All this isn’t to say, however, that everything’s a blast. While there are plenty of of well-balanced, varied environments to roll out on, players don’t get to choose which one they fight on. This forces the player to learn just one strategy on one map at a time. That’s fine if you’re into driving a light tank around in circles, scouting for the big guys, but if you’d like to be able to dodge blasts and do some return fire from the best places on any particular map, there’s a steep learning curve to climb.

That’s not helped by the distinct lack of cooperation during battles, something I noticed at both high or low tank levels. Voice chat isn’t widely used, and though in-game commands offer some pointers to your teammates, they’re not as clear as they should be. Then there’s the biggest anti-teamwork bombshell of all: buddies can only join standard battles in pairs. All other players are picked at random based on tank level and type. (A ‘premium’ account will let three friends play together, which is hardly better.) Social tankers with friend circles larger than one can try to form a tank company, which match skilled players against one another, but a lack of teamwork in the basic game has strangled most players from exploring this option.

Still, for a free-to-play tank fighter, it’s hard to beat the comprehensive World of Tanks. The extremely thorough vehicle collection, tech tree, and crew leveling gives players tons to work toward, even if they can only bring one buddy or two buddies along for the ride. Wargaming.net released updates with more maps and tanks, and I suspect with a few more we’ll have a World of Tanks that would make even Gen. George Patton grin, aim, and fire.

Bottom line: As you knew when you were five, tanks blowing up other tanks is extremely fun. Unfortunately, but buddy system is extremely limited.

Editor's note: This review originally stated "World of Tanks" did not support voice chat. The review has been updated to reflect that it does support that feature. We regret the error.