Well-borrowed gameplay pushes 'Shadow of Mordor' to the top 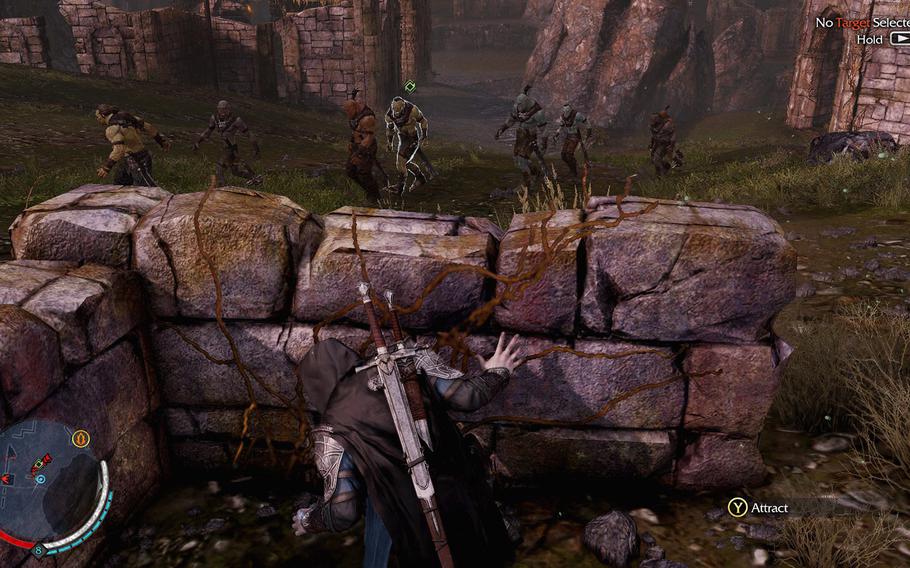 At its core, "Shadows of Mordor" is a stealth game. Often, discretion is the better part of valor - especially when the odds are usually stacked against you. (Screenshot)

At its core, "Shadows of Mordor" is a stealth game. Often, discretion is the better part of valor - especially when the odds are usually stacked against you. (Screenshot) 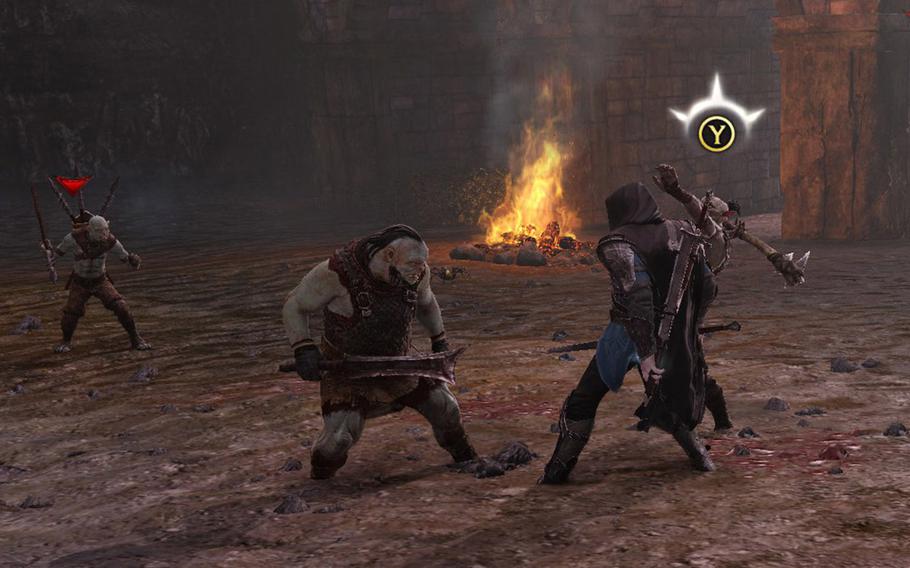 Combat in "Shadows of Mordor" will feel very familiar to fans of the excellent "Batman: Arkham" series. (Screenshot) 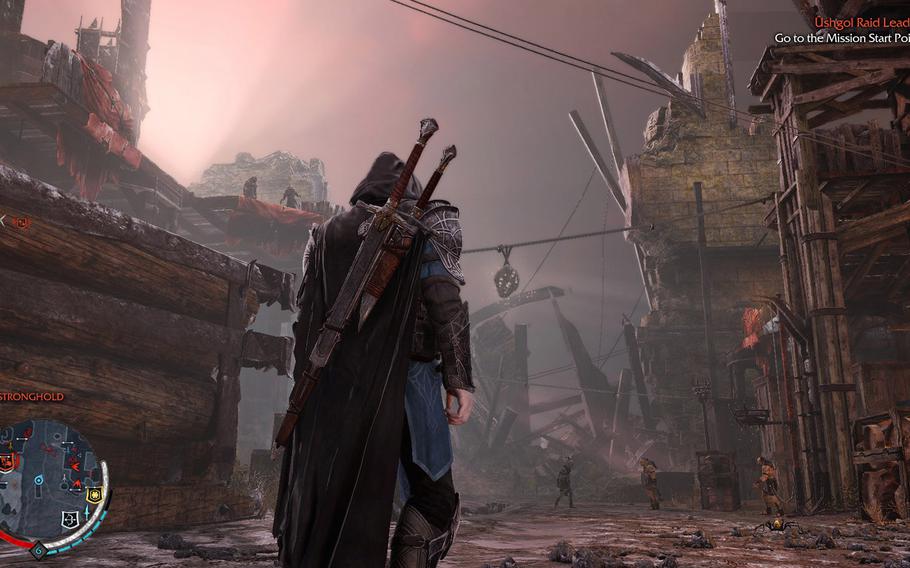 Some of the locations, especially the Orc shantytowns, are impressive in their size and fine attention to detail. (Screenshot) 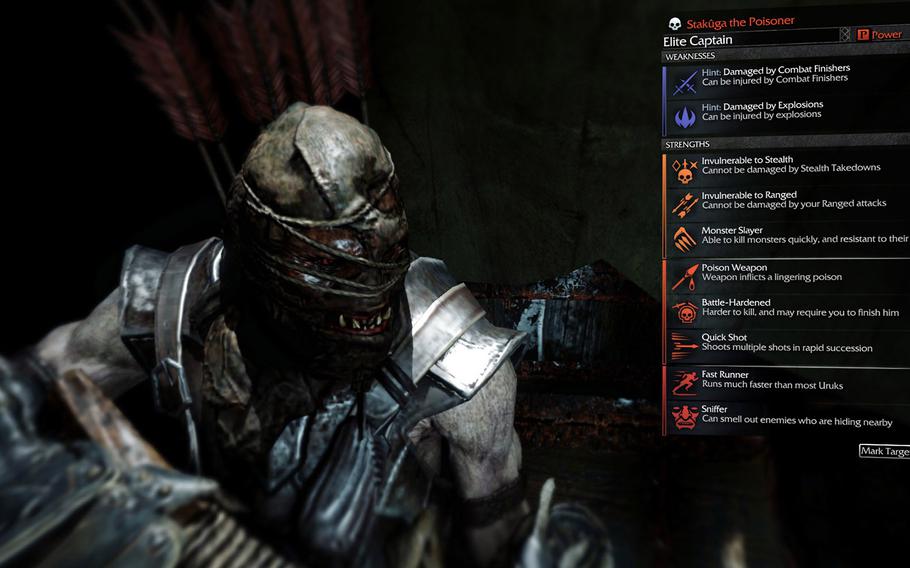 Each of the targets Talion tracks down in "Shadows of Mordor" will have their own strengths and weaknesses to exploit. These have a major impact on how each target can be taken out. (Screenshot) 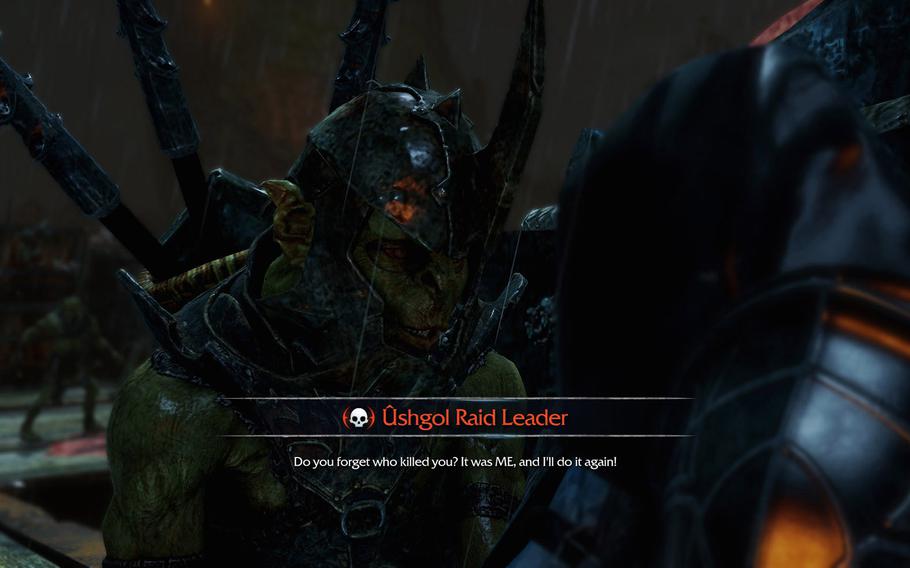 Enemies react to events that happened in the past. Orcs that you hurt in previous battles will be scarred the next time you meet, and enemies who have bested you in the past will taunt you with that fact in later encounters. (Screenshot)

If imitation is the most sincere form of flattery, then Monolith Entertainment has just written one heck of a love letter to Rocksteady in the form of “Middle-Earth: Shadow of Mordor.”

The similarities between “Mordor” and Rocksteady’s groundbreaking “Batman: Arkham” series are a bit too close to be easily ignored. If not for the fact that both were published under Warner Bros. games development arm, it wouldn’t be wholly incorrect to say the base gameplay is nearly identical.

Combat in both is a matter of single, well-timed button presses. Stealth is a key element in both. Not even “Arkham’s” detective mode is safe, as “Mordor” copies it almost exactly. Nearly everything in “Mordor” feels familiar, and it doesn’t help matters that another key element — climbing towers to survey the landscape and unlock missions — is taken straight from the Ubisoft game design playbook.

At the very least, Monolith chose good students to crib off from, as all of the elements they borrowed do work exceptionally well. Fighting off hordes of enemies with counters, flips and dodges is just as exhilarating here as in in “Arkham Asylum,” and jumping from ledges to take out foes one at a time is still a great gameplay mechanic.

Those components alone would have made “Mordor” just another OK game, to sit among the pile of “Lord of the Rings” games that have been decent, but never outstanding.

​Luckily, “Mordor” offers a hook that I’ve never seen in a video game before and it elevates what could have been a mediocre experience into something that has to be played to be believed.In “Mordor,” you play as a ranger by the name of Talion who watches his family get killed in front of him before he, himself is executed. He is then brought back to life, bonded to a mysterious Elvish wraith who joins Talion on his mission of revenge.

In order to exact that revenge, Talion must cut his way through the hordes that have overrun his former home. That’s where Monolith’s “nemesis system” comes in.

​The location of Talion’s ultimate target is unknown to him and all but the highest level war chiefs that each command a legion of Orcish grunts. To get to the war chiefs, Talion must defeat and then interrogate the lower level foot soldiers — who don’t give up their secrets easily. Each kill gets him a little closer to his target. But there is a catch.

Sauron’s chain of command is a finicky one. When Talion kills a lower level grunt, another Orc will jump in to fill the gap. When you kill a mid-level boss, one of the lower level Orcs will be promoted and will grow in power. In some instances, these enemies will escape, only to reappear later with scars and battle wounds. They’ll even mention earlier meetings when you fight them again.

The nemesis system also moves time forward when Talion dies — a temporary ailment for an undead wraith. The orc that delivered the final blow will grow in status and taunts Talion with his defeat the next time they face off.

As you kill your way through the ranks, the location of the powerful war chiefs becomes clearer. Those bosses are accompanied by bodyguards — unless of course, you take them out first. With a bit of planning, the big boss battles become a little easier, without taking out the bodyguards ahead of time, they become nearly impossible.

It’s an extremely interesting gameplay mechanic that works wonders in making the world of “Mordor” seem to exist free of player interaction. If nothing else, it adds a gameplay reason for the wanton slaughter that accompanies action games of this type.

“Shadows of Mordor” is a game that copies quite a bit from other series — albeit well — and the story is generic revenge fantasy stuff, but the nemesis system makes this a “can’t miss” title.

I’d recommend this game to anybody who enjoyed the “Arkham” games, or who is just looking to experience something they never have in gaming before.

Bottom line: “Shadows of Mordor” is a must-buy.