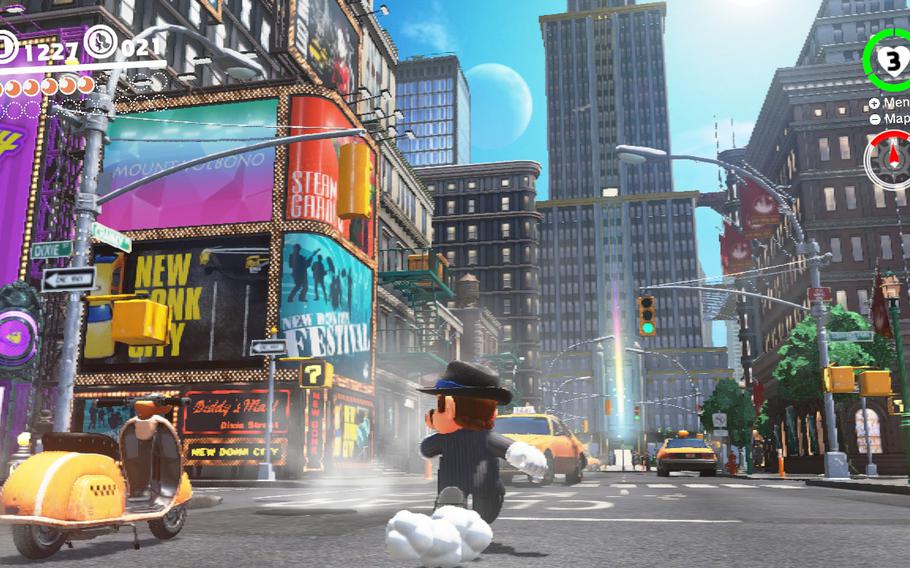 The levels of "Super Mario Odyssey" are more imaginative than in some past titles. (Nintendo)

The levels of "Super Mario Odyssey" are more imaginative than in some past titles. (Nintendo) 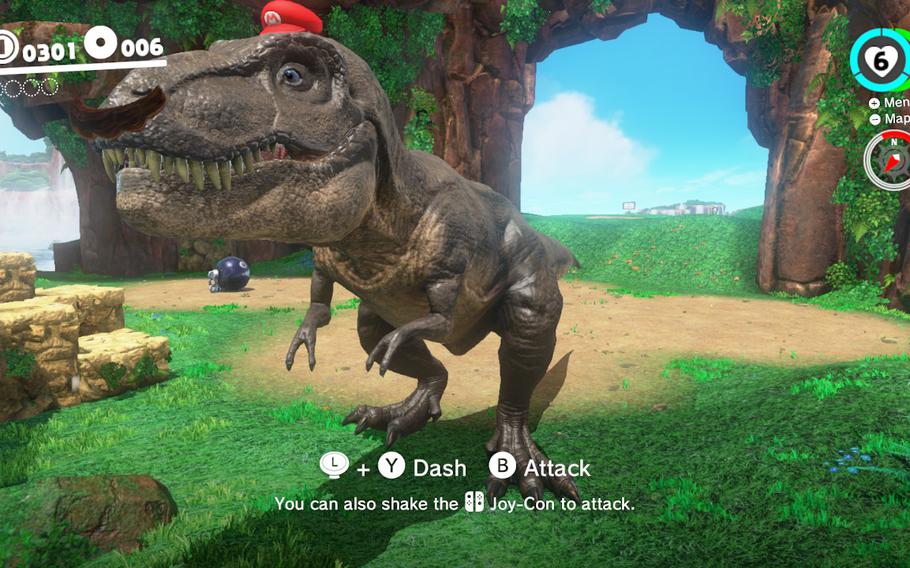 Early on in "Super Mario Odyssey" Mario can take command of a sleeping T-Rex. That's when I knew I was in love. (Nintendo) 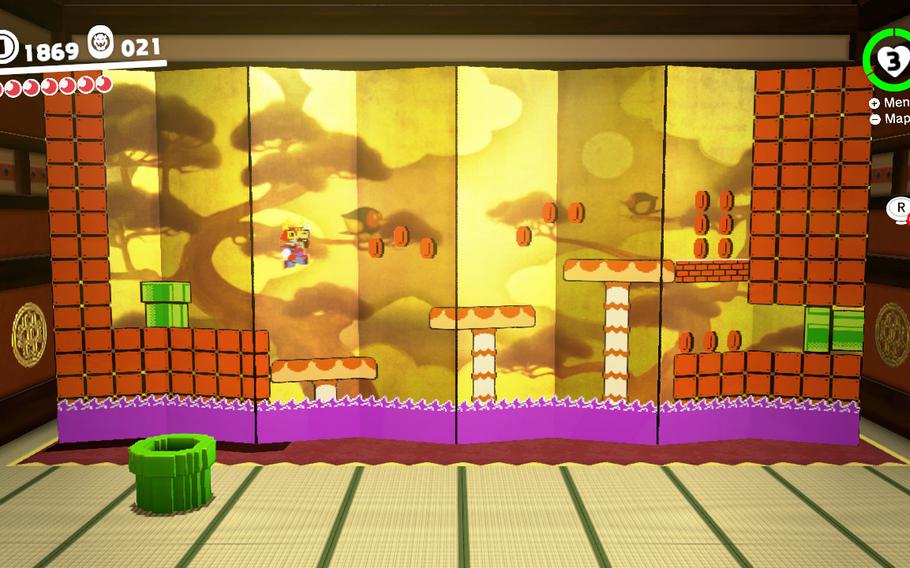 Some of the level designs of "Super Mario Odyssey" play with the juxtaposition of 3D and two-dimensional game space. (Nintendo) 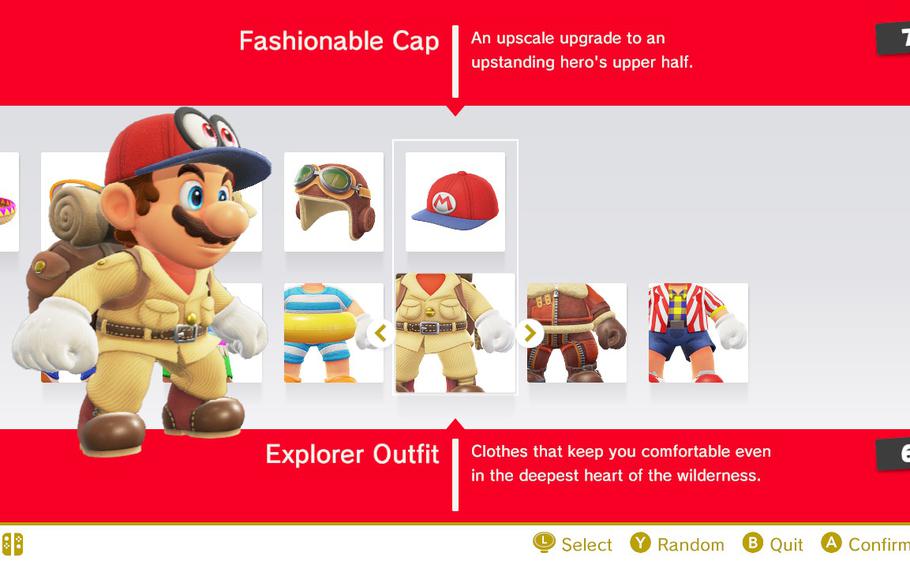 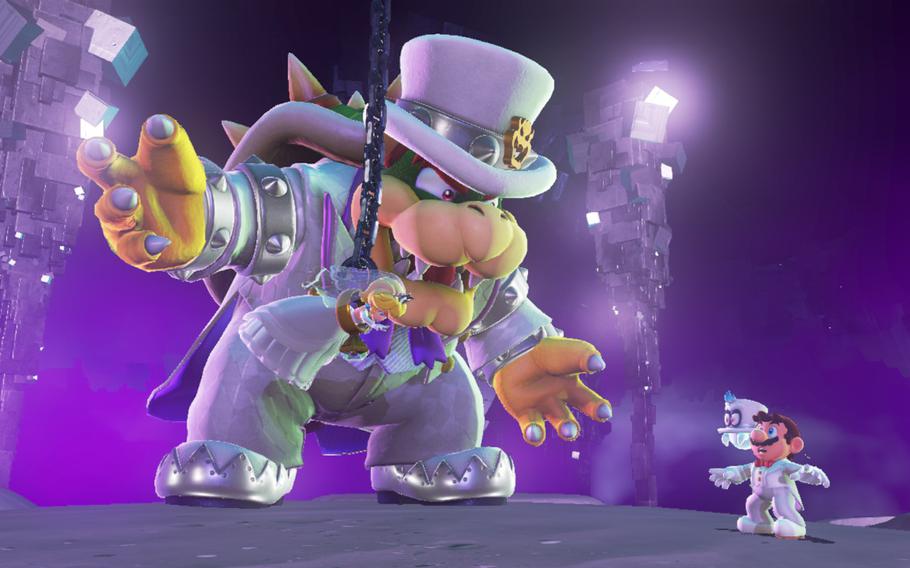 By now, the success of “Super Mario Odyssey” is well-known among the gaming community.

Chances are, if you’re reading this, you’re well aware of the game’s stellar critical reception. Game reviewers far and wide have proclaimed “Odyssey” to be one of the best games of the year, with some even going so far as to call it one of the best Mario titles ever made.

What you may or may not be aware of is that “Odyssey” also is a grand financial success for Nintendo, moving millions of copies in a matter of days, according to a statement released by the company.

So, instead of a general review of a title that most gamers are either going to get or have already beaten, I’m going to examine some of the elements that I believe made “Odyssey” a hit.

The first and major element behind its success is the Nintendo Switch itself. This charming piece of hardware has been the pleasant surprise of the year, with a library of fantastic titles trickling out in 2017 to keep the system fresh in gamer’s minds. Games like “The Legend of Zelda: Breath of the Wild,” “Splatoon 2" and even “Arms” have provided ample reasons to keep the system from collecting dust.

This has made the Switch a very popular device to have — even among gamers who skipped over the Wii U. According to Business Insider, the Switch is expected to sell 14 million units by March 2018. The Wii U, by comparison, sold fewer than that across its entire lifespan.

That leads to the second major element behind “Odyssey’s” success, which is brand recognition. No matter your background, if you’ve played a console game in the past 30 years, you’ve at least heard of Mario. “Super Mario Run,” expanded the brand even further, reaching to mobile gamers who may not have ever had a Nintendo console for whatever reason.

However, name recognition and nostalgia — while a powerful one-two punch — don’t explain the critical success of “Odyssey.” While a constant fixture in the gaming world, the Mario games — even among the mainline entries — have ranged from classic to forgettable.

While I think it a bridge too far to call any of the recent Mario games bad, there have been some supremely vanilla entries in the long-running series. There was nothing wrong with “New Super Mario Bros. 2” or “Super Mario 3D World,” but there was nothing great about them either. Same could be said for any number of the side Mario projects. The Mario name might generate some blind sales, but critics as a whole are not so easily swayed.

So, then, what made “Odyssey” different than those titles? To me, the key to understanding the game’s critical success is the way it feels entirely original, without losing that classic Mario feel or relying on gimmicks.

“Odyssey” brings Mario back into a familiar 3-D, open-world space reminiscent of “Super Mario 64.” It even relies on the same basic premise, with progression being tied to collecting doo-dads (this time around they’re Power Moons) scattered across the levels.

“Mario 64” had seven stars scattered across each of the levels and generally weren’t very complicated to find or collect. The Power Moons are handled quite a bit differently, as there are sometimes dozens of them in a level to find. Some of them are easily found, but a number of them are hidden away or locked behind some brainteaser or precision platforming bit.

To clear a level and continue to the next, Mario will have to collect a set number of moons. Never once did I have to spend more time on a level than I wanted to, though. There were ample moons found just by simply playing through the level.

Conversely, when I wanted to spend more time on a level — like the wildly imaginative, food-based Luncheon Kingdom, I had plenty of moons to collect while exploring. “Mario 64” allowed players the opportunity to tackle levels at their own pace, but here, that feeling is amplified.

The other major gameplay element affecting “Odyssey’s” success is tied to the game’s central gimmick. As the game opens, Bowser once again kidnaps Princess Peach and Mario naturally rides to the rescue. In the ensuing fight, our beloved plumber’s trademark hat is torn to shreds and he’s unceremoniously blasted into the conveniently named Cap Kingdom. There he teams up with a sentient hat by the name of Cappy.

From there on, Mario is given the ability to fling Cappy at enemies with the press of a button. Depending on what Mario throws his new hat at, Cappy can either destroy it or possess it. By possessing enemies, Mario can use their abilities to solve puzzles and overcome obstacles. Taking over a Goomba, for instance, allows him to stack atop other Goombas to reach otherwise inaccessible areas.

By flinging his hat, he also can reach new areas by using it has a temporary platform, which opens up areas across all levels that you’d never see otherwise.

The best part of the hat-throwing mechanic is how natural it feels. Within seconds, flinging Cappy around will feel as natural to most players as jumping or butt-stomping enemies. With a little practice, players will be able to pull off extensive jumping combos that feel amazing. There are some optional Joy-Con motion controls, but I never found them necessary to finish the game.

While playing through “Odyssey” I couldn’t help but compare it to “Super Mario Sunshine.” In that GameCube exclusive, Mario also had a new mechanic that allowed him to reach new areas and defeat bosses. But I never really felt comfortable with the water pack in “Sunshine.”

When I finished that game, I thought how much better it would’ve been without its reliance on that specific gimmick. When I finished “Odyssey,” I wondered how it took so long for Nintendo to implement such a fantastically fun feature. If it doesn’t return in some fashion in subsequent Mario games, it’ll feel like a loss of something special.

In fact, that’s how I felt when I finished “Odyssey” altogether. Though I spent some time collecting unneeded moons, I progressed through the game fairly quickly. I know I missed out on a lot of content, which is great, because when I defeated Bowser for the final time in “Odyssey” I couldn’t wait to go back and play it again.

That, too, is part of the game’s success. It’s short enough that a dedicated player could probably finish all the levels in a long weekend, but there is enough content to keep players happy for much, much longer.

Not just gameplay, either. There are some fun extras to be found both in the main game and in the extra content after the story is complete. In addition to the Power Moons, purple, level-specific coins are scattered across the worlds.

By exchanging those at stores, Mario can change his costume. Everything from a pirate captain to chef is on the table here. I’m only a little embarrassed to admit that I got a fair amount of enjoyment out of customizing Mario to fit each level. But the purple coins are generally well-hidden, so I know I missed out on a few fun costume pieces.

If for some reason you own a Switch and haven’t picked up “Odyssey,” I urge you to buy it as soon as possible. Mario has long been the unifying ground for gamers both casual and hardcore, but “Odyssey” is really something special. I’d easily put it in the top tier of what the series has had to offer.

Time will tell if it’ll eclipse some of the series’ classic entries, but one thing is for sure — “Odyssey” is one of the true must-buy games of 2017.