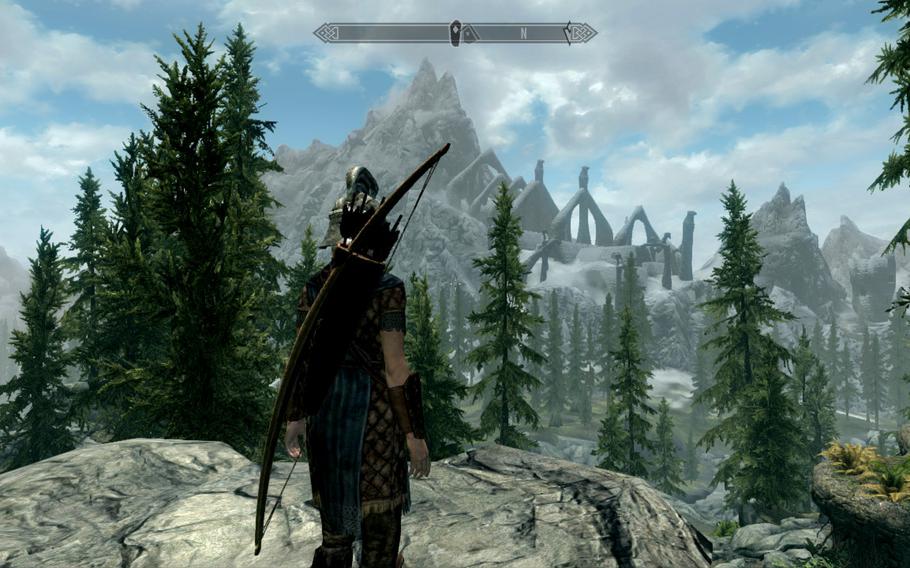 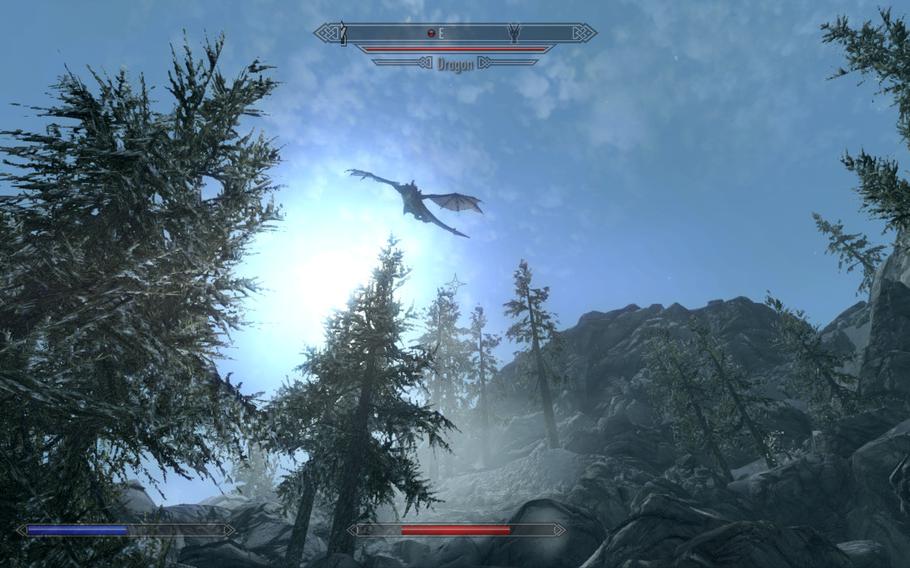 Remember when the dragons in "The Elder Scrolls V: Skyrim" were scary? It seems like, oh, about 400 hours of game time ago. (Bethesda Game Studios) 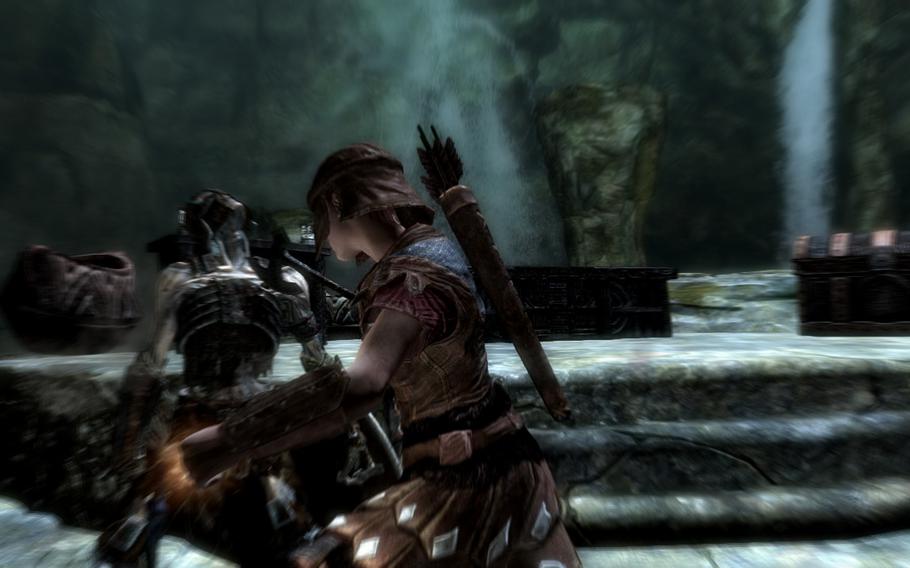 Slaying draugr, finding loot, dying from misjudging the height of a cliff - this is definitely "Skyrim." (Bethesda Game Studios) 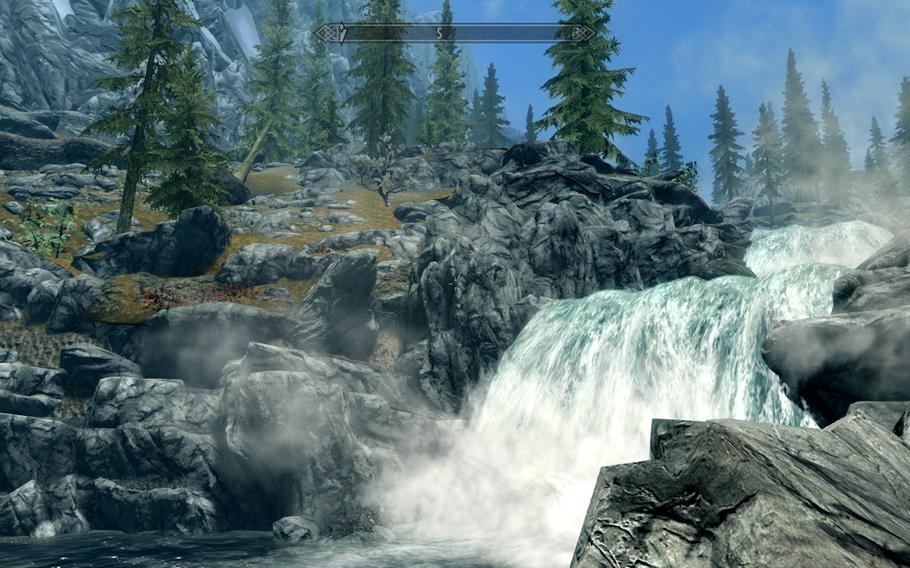 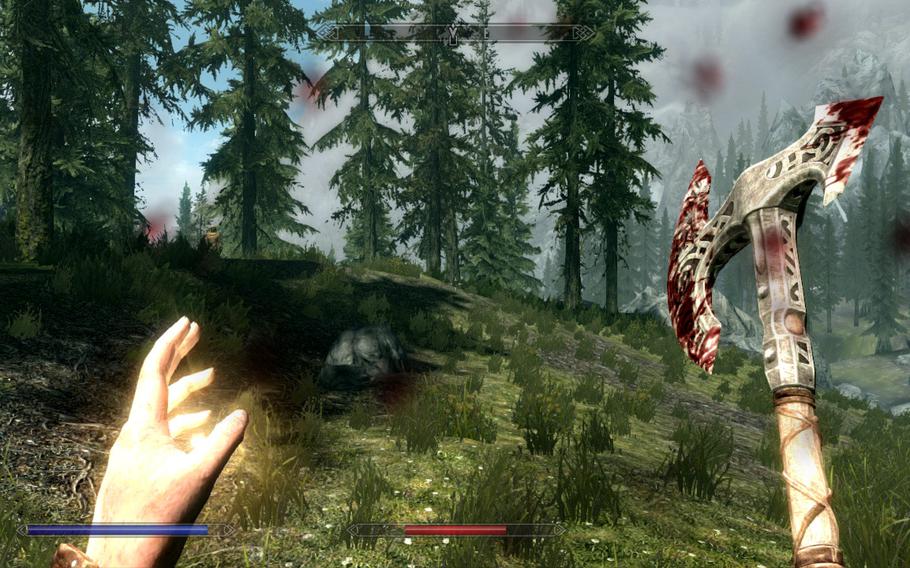 Right and left Joy-Cons can be used to swing the weapons in the game. As far as motion controls go, they work well enough to be fun - in small doses. (Bethesda Game Studios)

Where do you even begin to review a re-re-release of a six-year-old video game? Most of the time, the answer is simple. You don’t. You skip that release and move on to the next one, much like gamers will not normally flock to a port of such an old game.

But this isn’t just any game.

This is “The Elder Scrolls V: Skyrim,” arguably one of the best first-person role-playing games ever made and certainly the most popular. It also isn’t just any old re-release.

This time, Bethesda has ported the game over to the red hop Nintendo Switch and with it, a few new features that may bring back even the most jaded of gamers.

The biggest draw of the Switch port of “Skyrim” is its portability. Finally, we get to play “Skyrim” on the go and it feels absolutely fantastic. When the game was released, being able to play it wherever you’d like was but a pipe dream. Now, thanks to the Switch, it a reality.

This version of “Skyrim” contains all the major DLCs, including Dawnguard, Dragonborn and Hearthfire. It also features amiibo support, with different figures granting Nintendo-themed loot. Otherwise, it’s largely the game we all remember.

Dragons have returned to the frostbitten mountains of Skyrim and you, as the newly-reincarnated Dragonborn must seek out your destiny as two warring factions vie for control over the region.

It’s still a suitable epic setting for a game, though I suspect most gamers have spent hundreds of hours uncovering every little secret it has to offer. I know I have.

Even so, the allure of “Skyrim” in the palm of my hands was too great to resist. I once again found myself lost for hours on end; crafting weapons, slaying trolls and stealing everything that wasn’t nailed down.

Even though I, according to Steam, have spent roughly 300 hours playing the original version, I was surprised to find I still had a blast playing this – largely due to the Switch’s portability.

During my many hours of playtime, I didn’t notice any slowdown or graphical glitches – with the console docked or undocked. There are some visual downgrades – most notably the grass rendering distance is much shorter – and a few textures are blurry. Seams in the geometry, especially on the ground, are easily visible in some areas – but this isn’t a common occurrence.

For all intents and purposes, playing it on the TV and playing “Skyrim” on the go is the same basic experience. That is save for the other addition to the Switch version – motion controls.

“Skyrim” still uses left- and right-hand equipment slots. Adventurers can equip an axe in one hand and a shield, spell or even another weapon in the other. This was one of the key changes between “Oblivion” and “Skyrim” and the Switch’s left and right Joy-Cons lend themselves beautifully to mimicking this in real life. Swinging the right Joy-Con can now swing a weapon – same with the left.

The feature is a cute addition, but it’s underutilized. You can’t lift a Joy-Con to block with a shield, for instance, or push it forward to activate an equipped magic spell. Aiming with a bow requires too much wrangling with the motion sensors to be useful. Which is a total buzzkill, because who among us doesn’t end up a stealthy archer at some point?

Basically, the motion controls are fun to play around with for a bit and then I suspect most gamers will go right back to traditional controls.

So, back to my original question. How can one honestly recommend – or not recommend – a port of a six-year-old game? Easily, as it turns out.

If you have a Switch already and aren’t sick to death of Skyrim’s icy tundras and infinite draugr dens, pick this up. It’s an incredible game and being able to play it anywhere you’d like is well worth the price of admission.

Gamers without a Switch can easily pick this up for cheaper than the asking price of $59.99 and get the full experience on a console or PC.

Those who are well and truly done with “Skyrim” aren’t going to find a ton of reasons to return. There are no new expansions or major gameplay additions and no new areas to explore.

Still, this is “Skyrim,” one of the best games of the past decade. In form and function, it has been the open-world game to beat, for good reason. Delving back into it one more time may not appeal to all, but for those with a Switch and an urge to explore, I heartily recommend it.

darnell.michael@stripes.comGrade: B+ Platform: Nintendo SwitchRelease Date: Nov. 17, 2017A copy of this game was provided by the publisher for review purposes.