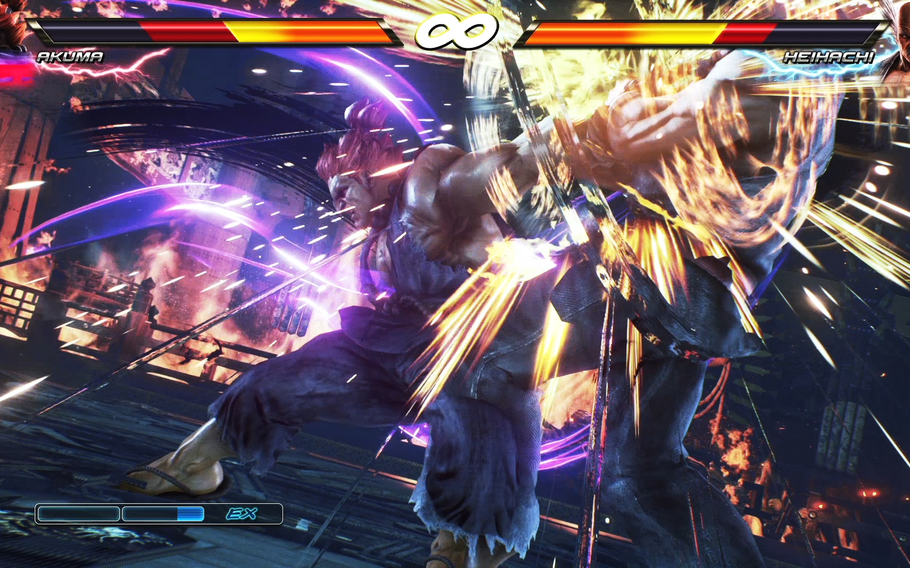 "Tekken 7" joins the growing pile of great fighters released in 2017. This time, PC gamers will be able to join the fray. (Bandai Namco Games)

It has been a banner year for fighting game enthusiasts.

Just this summer alone, pretend pugilists have had several high-profile, well-crafted fighters to take to the lab. The recently released “Injustice 2,” the mobile version of “Skullgirls” and the final form of “Street Fighter II” are all currently vying for fighting fans’ attentions.

That’s not even looking ahead at “Marvel vs. Capcom: Infinite,” or Nintendo’s “Arms.” So where does Bandai Namco’s “Tekken 7” sit among this pile of fighters?

Right near the very top.

For the uninitiated, this isn’t actually the seventh game in the “Tekken” series. The first, which wowed by being one of the first non-terrible 3-D fighters on the market, hit arcades in 1994. It broke through on the original PlayStation a year later.

There has since been 7-and-a-half follow ups — with “Dark Resurrection” and two “Tekken Tag Tournaments” filling the gaps between the numbered releases.

In addition to the wow factor of existing in the third dimension, “Tekken” grew a following due to its irreverent setting and characters and its fast, fluid fisticuffs. “Tekken 7” leans into both of these strengths to the nth degree, cranking up the silliness and combo-riffic gameplay to the max.

The cast of characters in “Tekken 7” sits at 37, with a couple of variations of a few fighters to pad out the roster even further. There are traditional fighters, like the Bruce Lee-esque Marshall Law and British boxer Steve Fox, as well as an assortment of zany characters that include a fighting panda bear and a katana-wielding space alien.

A serious game, this is not.

The fighting itself is another story. For all the quirkiness of “Tekken 7’s” cast, when it comes to the meat and potatoes of fighting, the game remains one of the best in the business.

Whether you prefer rushdown offenses, poking defensive play or combo strings, there are several characters to match your preference. Some characters, like the guest-starring Akuma, even play around with introducing proper zoning. Each is easy to pick up, but will take hours of practice to perfect.

No matter whom you choose, the fights are going to be short, brutal affairs. Rounds between experienced players in “Tekken 7” take mere seconds to finish, with the person who dropped fewer combos usually taking home the gold.

Among newer players, the player who figures out how to properly sidestep and counter throws is going to have a leg up on the button-mashers of the world. Even among newbies, rounds are over quickly. “Tekken” is the ultimate in fast-paced fighters, and this most recent iteration continues that tradition.

It’s a good thing, then, that the technical aspects of the game are so solid. With rounds being over so quickly, long load times or difficulty finding games would absolutely kill this title. That’s not the case, as offline, load times were quick enough to barely register and online matches were bountiful.

Online is where the real competition lives, of course, so the abundant matches available are a definite plus. The offline modes are interesting, but there are some noticeable gaps in the single-player offerings.

Gone is the fan-favorite survival mode, as is the traditional ladder mode with character-specific storylines. The remaining arcade mode is a shortened affair that pits you against just a handful of enemies before ending ingloriously.

To compensate, Namco had introduced a story mode that takes you through the familial drama of the Mishima clan, chock full of well-produced cutscenes and interludes.

The fights themselves are not very engaging, however, as many of them force you to wade through a series of generic enemies over and over again. The time between fights also gets out of hand. At one point there are five separate cutscenes that play between bouts. To those not invested in the lore of "Tekken," story mode is going to annoy, more than entertain.

The meat of the single-player meal is the “treasure mode,” which pits you against an endless stream of enemies. Winning matches earns you coins and unlockable cosmetic items to give your character a new, and often better, look (looking at you Hwoarang).

This mode is where I spent most of my time offline. I have to admit that the treadmill of unlocking new pants and silly hats for my favorite fighters is extremely satisfying. I’d prefer it if the mode added more of a survival aspect to it, with each round’s life bar carrying over to the next, but that’s a minor nitpick.

It’s worth pointing out that this is the first chance PC gamers have had to join the King of the Iron Fist Tournament. Those gamers have a plethora of graphical tweaks available to them that their console brethren don’t, but console gamers will undoubtedly have the bigger pool of online fighters to choose from. It’s a bit of a tradeoff, but as a PC-first gamer, finally getting to play one of my favorite series on my preferred platform is fantastic.

In short, “Tekken 7” is more of what fans have come to expect from the series. If you’re a fan of Namco’s premiere brawler, this is only good news. If you’ve never cared for “Tekken,” this entry won’t change your opinion of the series.

I do think it’s worth checking out if you’re a fan of fighters, or if you need something to mess around with in the barracks or aboard a ship for along period of time. It’s a casual-friendly fighter that anybody can pick up and have a good time with, a must for party-friendly gaming.

Plus, you can dress up as Inspector Gadget and beat the hell out of a grizzly bear. What’s not to love there?

Grade: B+Platforms: PC (reviewed), PlayStation 4 and Xbox OneA copy of this game was provided by the publisher for review purposes.