Sail on the winds of adventure with ‘Pillars of Eternity II: Deadfire’ 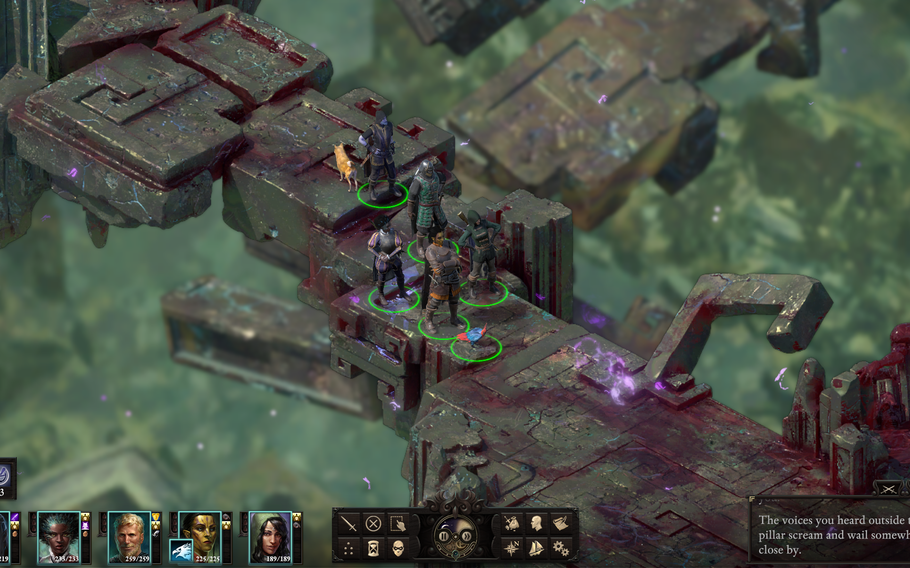 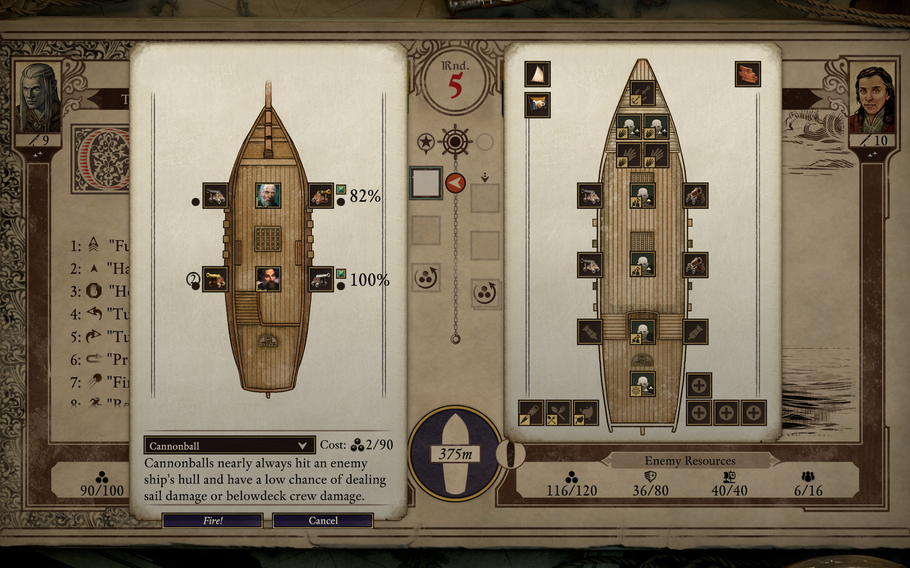 Ship combat is the major addition to “Pillars of Eternity II: Deadfire.” In the early stages of the game battles will have to be chosen carefully. (Obsidian Entertainment) Exploration on the world map in “Pillars of Eternity II: Deadfire” largely takes place on the open waters. (Obsidian Entertainment) 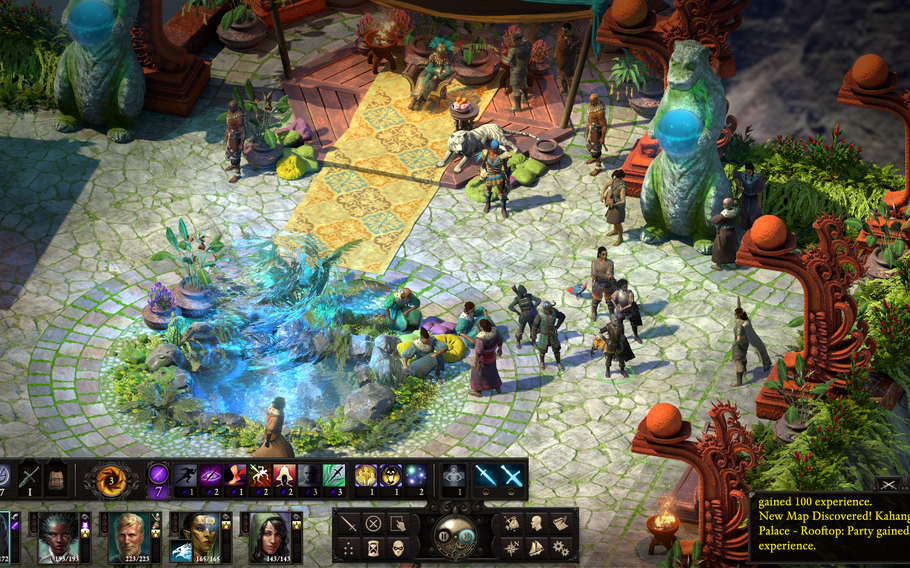 As the original “Pillars of Eternity” came to a close, I was filled with a great sense of sadness. Many gamers experience this emotion after finishing a beloved game, but with “Pillars” the emotion was amplified, as I wasn’t sure we’d ever see its like again.

“Pillars” was the great mainstream return to the classic computer roleplaying game formula, itself once forgotten, with its most wondrous elements ripped from its lifeless body to adorn lesser creations. While there were always new RPGs in the mix, there were, at times, almost zero classic party-based, computer-centric roleplaying experiences.

Thankfully, “Pillars” delivered on its Kickstarter promises and its critical success helped usher in – alongside games like “Shadowrun Returns” – the return to prominence of the so-called “cRPG.”

Obsidian followed up the original “Pillars” with the underrated “Tyranny” and has now returned to the fantastical world of Eora, where powerful gods toy with the lives of mortals. With “Pillars of Eternity II: Deadfire” the developers chose to expand on the more traditional setting of the first, infusing tropical scenery with traditional fantasy trappings to great effect.

“Deadfire” picks up almost immediately at the end of the first game. The Watcher, the victorious hero of the first game, returns (though you can create your own personal protagonist from scratch here). The Watcher rests in his or her castle after having exposed the true origins of the gods of Eora.

Suddenly, a giant statue rises from the ground, breaking apart your castle and casting you out to sea. Seeking answers, the Watcher takes to the high seas, sailing to the Deadfire Archipelago.

There, the Watcher’s crew will encounter sunken cities, sun-soaked villages, fiery temples and more than a few fantastical takes on Japanese and Pacific Islander cultures.

The party members the Watcher picks up along the way are equally eclectic. There is Serafen, the salty Orlan pirate and Tekehu, the arrogant watershaper who is all but worshipped in his native land. The biggest new addition to the cast is Xoti, a wide-eyed priestess that is a mission to shepherd lost souls to the afterlife. Aloth, Eder and Pallegina are the returning members of the original cast.

While interesting enough, none of the characters are as original or memorable as the first game’s Grieving Mother or Durance. As much as I enjoyed having Eder back tanking faces all day, every day, I can’t help but feel that the three returning adventurers should have have instead been original characters.

Even still, none of the characters are strictly re-skinned fantasy tropes. Each are wholly unique creations, each feel that they belong in the world that Obsidian created. There isn’t, for instance, a dwarf hanging around because all fantasy games must follow the Tolkien blueprint. The change of pace is extremely welcome. As is the expanded focus on exploring the world of Eora.

One of the knocks against the original “Deadfire” was its more restrictive take on exploration. There were a few branching paths, but for the most part the next destination in the mission journal was the only real place to go.

“Deadfire” is more or less the exact opposite. The Watcher early on is granted an upgradable pirate ship and as the game opens up, the entire world become explorable. A thick fog of war covers the world map, hiding islands packed full of hidden quests, buried treasures and much-needed resources.

The fog also conceals the many dangers of the Deadfire Archipelago. Storms can destroy your ship in the blink of an eye and pirates roam the high seas, ever searching for unwary adventurers to waylay. Of course, the Watcher isn’t helpless.

Ship-to-ship combat is a major new addition to “Deadfire.” When roaming around the world map, pirates and other hostile forces will attempt to intercept the Watcher’s ship. If successful, ship-to-ship combat begins.

Naval battles are based around a series of choices selected from a text menu. Closing on the enemy ship will bring it in range of equipped cannons, turning port or starboard will bring those cannons to bear. More nimble vessels take less time to turn, while heavier ships can take more punishment. Each round of combat has stages – you’ll take an action, then the enemy will do the same.

This can lead to an interesting bit of cat and mouse where you’re maneuvering around, trying to get your ship in position to fire, while at the same time avoiding opening your ship’s sides up to a barrage of cannon fire.

While the presentation is a little dry – life or death naval battles reduced to some text and a few drawings – the ship combat remains engaging throughout the “Deadfire” experience.

As combat begins, you can also choose to ignore the ship combat, closing and boarding the enemy vessel. This is a risky maneuver which will always lead to some damage to your ship and crew. But it bypasses the text-based combat and leads to the more traditional cRPG combat that some players may find more engaging.

On land that combat is the bread-and-butter of the gameplay. It’s the classic real time with pause combat, where battles play out in real time, with a heavy emphasis on pausing to issue commands to each member of the party.

Most of “Deadfire’s” combat system was ported over from the original “Pillars” so experienced players know what to expect. One thing that seems to have changed from the first game is the difficulty level. The first “Pillars” was quite difficult and death came often.

“Deadfire’s” encounters are much more forgiving and the plethora of sidequests make over leveling an almost certainty. More seasoned RPG fans probably want to consider bumping up the difficulty.

Those fans will be relieved to learn that the hardcore RPG elements from Pillars have returned, and even expanded. There are more skill checks when attempting any major action, from crossing a rope to persuading a dragon not to eat you. There are also various factions, each with their own conflicting agendas, making it impossible to please everybody. Make no mistake, “Deadfire” is a classic RPG, with a hard emphasis on the “R.”

Obsidian had a challenging task ahead of them with “Deadfire” and it wasn’t one without risk. “Pillars” was sold on the promise of nostalgia and bringing back to prominence a nearly-forgotten genre.

While it was a success, players are notoriously finicky when it comes to games that play off nostalgia. That can be a bigger obstacle when it comes to sequels – after all, what if fans decide one trip down memory lane was enough?

I think Obsidian understood that. They interjected enough new life into “Deadfire” that even those wary of games that sell themselves on nostalgia will find plenty to love here. From the pirate trappings, to the tropical setting, to the expanded exploration - it all leads to a more well-rounded, much more flavorful experience than the first “Pillars.”