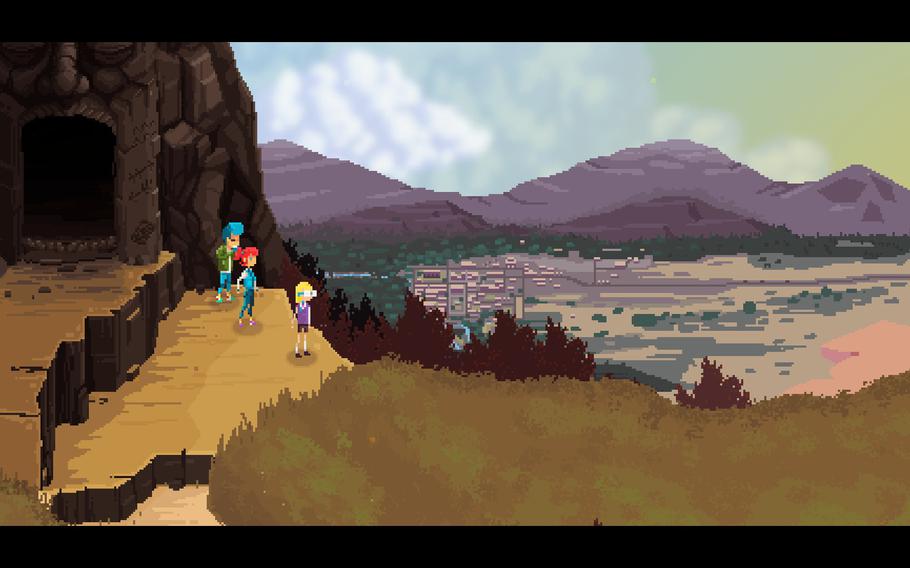 "Crossing Souls" is beautiful to see in action. The pixel art and fluid animation are some of the game's best features. (Fourattic )

"Crossing Souls" is beautiful to see in action. The pixel art and fluid animation are some of the game's best features. (Fourattic ) The interludes in "Crossing Souls" are ripped straight from the Saturday morning cartoons that once ruled the airwaves. (Fourattic ) 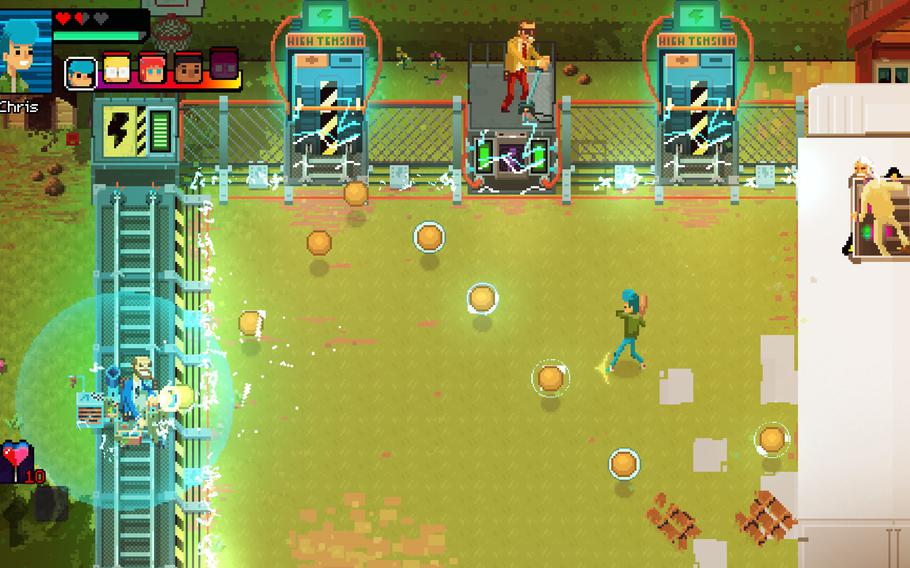 Combat in "Crossing Souls" outside of a couple of boss battles — like this one — isn't very exciting. (Fourattic ) 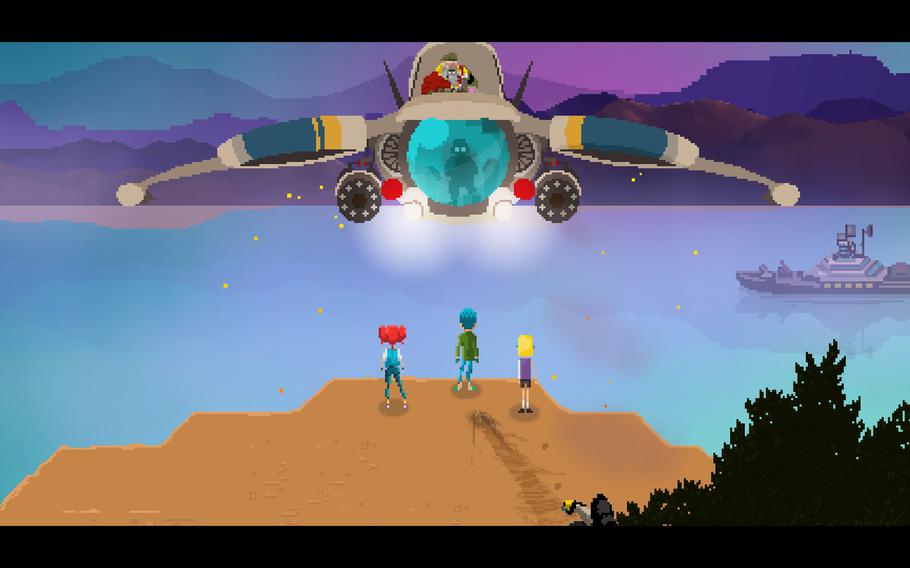 "Crossing Souls" pits a group of ordinary kids against a supernatural evil armed with modern weaponry and magic abilities. The baddies never stood a chance (Fourattic ) "Crossing Souls" is out now for the PlayStation 4 and through Steam. (Fourattic )

It’s safe to say we’re in the midst of a full-fledged hurricane of ’80s nostalgia.

From Netflix’s “Stranger Things” to the plastering of neon colors on everything, the decade that saw the rise of Members Only jackets and Madonna has made a scorching return to pop culture.

And more than a few video games have sought to cash in on this current craze, the latest of which is “Crossing Souls,” a pixeled roleplaying adventure by Spanish developer Fourattic.

Fourattic’s small team clearly has a love for all things ’80s, and it shows in every aspect of “Souls.” From the pixel art that evokes video games of yore, to the low-budget Saturday morning cartoon-esque cutscenes, to the dozens of references to everything from Michael Jackson to “Ghostbusters,” “Souls” is packed with love letters to the decade that Ronald Reagan built.

Even the game’s basic premise, that of a collective of spunky, adventure-seeking kids off to save the world, is ripped from innumerable ’80s movies.

“Crossing Souls’ ” story begins with Chris, a prototypical teenage boy, as he’s awakened by the obligatory annoying younger brother. Something mysterious has happened near the gang’s treehouse, so Chris gathers up the other members of the crew and off they go.

The world of “Souls” is presented in a top-down fashion, and each location — from the starting hometown, to the Old West village to the lair of the game’s chief baddie, is beautiful to behold. The stunning pixel animation injects life into every corner of the game’s California setting and is easily the best part of the game.

Combat and exploration are seamlessly integrated, with the former being in real time. Only one character can be controlled at a time, but they can be cycled in and out with the tap of a button, even in combat. This becomes important, as each character brings something new to exploring the world.

There’s Big Joe, the rotund kid who can push and pull heavy objects and packs a mean punch in combat. Charlie, the lone girl of the group, can use her jump rope as a catapult to leap long gaps. Matt, the requisite nerdy inventor, has a long-range attack and can hover.

Chris, the de facto main character, can use a baseball bat to attack and redirect projectiles and can also climb ladders and vines. Kevin, the obnoxious kid brother, can’t do anything — at least in the beginning.

All of these elements lay out a very strong foundation for the game to build upon. Some remain fantastic throughout the game, chiefly the art direction and soundtrack. Unfortunately, the game’s core elements — the controls, story, pacing and even ancillary gameplay additions — simply don’t.

As great as it is to watch and soak up the atmosphere of “Souls,” it’s equally frustrating to actually play.

For instance, the top-down point of view is great for showing off the art direction of “Souls.” However, it’s terrible for platforming, a mechanic “Souls” relies on throughout the game.

It’s difficult to judge which parts of the environment are part of the interactive world and which are just window dressings. As a result, I found myself missing what appeared to be easy solutions to platforming challenges because my character would fall right through pixels that weren’t actually there.

That would be bad enough, but the controls themselves are very floaty, making the platforming even more frustrating. Granted, you don’t die instantly on missing a platform, but you will be kicked back to the beginning of a section, sans a chunk of health. The same goes for the few stealth sections sprinkled throughout “Souls.” As a result, those sections are more frustrating than fun and stick out as the worst segments of the game.

Combat isn’t much better. While serviceable, it rarely evolves past walking up to enemies and hitting them with basic attacks until they die.

You’re able to find a finite item that stuns all enemies on screen, but that and redirecting projectiles with Chris are the lone combat tricks in your arsenal. I don’t need a lot of options in my combat, but what was available here make battles feel more like a chore than an exciting part of the gameplay.

In fact, the only real challenge comes from managing your health. Healing items are finite and health bars don’t regenerate outside of combat. Enemies can sometimes drop a small amount of health, but it’s rarely enough to keep your team at full strength.

That was an odd design decision, but it pales in comparison to Fourattic’s choice to have unskippable cutscenes — and even lengthy platforming bits — before major encounters. If you happen to die, congratulations; you’re sitting through all of it again.

In one egregious example, I had to sit through 15 dialogue boxes, a couple cutscenes and several waves of combat before being able to re-attempt a boss battle. Every single time. It’s a bewildering design choice that permeates the entire game, and while it’s not always as bad as that one admittedly late-game example, it’s annoying throughout.

The story’s pacing could have used a little work, too. The humor falls entirely flat, as most of the jokes and references are nothing more than “Hey, remember this thing from the ’80s?” The references themselves are also all over the place, with ’80s slogans and collectibles sitting alongside ’90s slang and even mid-aughts memes.

“Souls” starts out wanting to be a lighthearted adventure, then veers off into more serious fare. But unlike, say, “Bridge to Terabithia,” the serious moments feel like somebody tried to blend in a little “Grave of the Fireflies” with “The Goonies,” and it doesn’t work. The attempts at emotional impact never land because we’re not shown much about the characters beyond their archetype.

I wish “Souls” had been a better game. It has a lot to love, and some fans will undoubtedly enjoy their time with it. I find it a difficult game to recommend, though, due to the numerous frustrations that piled up during my playthrough.