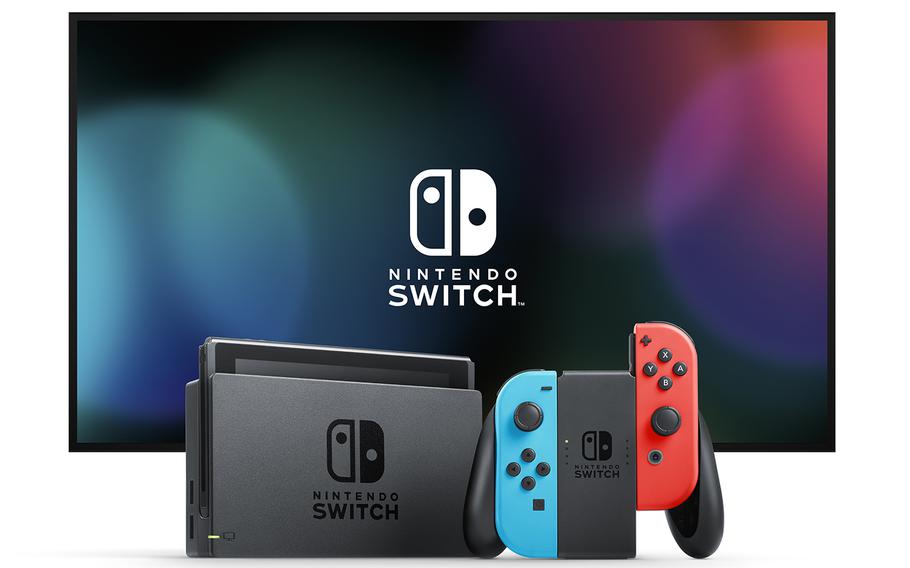 The Nintendo Switch will launch worldwide on March 3 for $299. (Nintendo)

The hardwareAs the name implies, Nintendo’s Switch is good at changing things up.

It can convert from a full-scale console to a hand-held device in a flash. It also accommodates several types of controllers, permitting a variety of gameplay styles. But most importantly for Nintendo fans, it will let them switch from playing “Legend of Zelda” to “Splatoon” to “Mario Kart” among plenty of other favorites.

The Switch hits stores on March 3, replacing the ill-starred Wii U as the company’s flagship hardware. With only a few weeks left before launch, Nintendo is providing a peek at the action in a road show. It rolled into Washington, D.C., in early February with scores of consoles, a large assortment of games, crowds and pounding music. And it delivered a good chance to get acquainted with the system and many of its upcoming titles.

The console consists of two basic pieces: the Switch itself, which is a device that looks like a miniature flat-screen TV, and a dock that allows the console to connect to a television.

When you want to play a game on the TV, you slide the Switch into the dock and the action immediately moves to the television screen. In this mode, the controller resembles a standard two-fisted controller, with two joysticks, two sets of buttons, two triggers and two bumper buttons. However, it actually consists of three pieces: two “Joy-Cons,” which are covered in the aforementioned buttons, and a central mount that holds them together. The sticks and buttons are well-positioned and the ensemble fits comfortably in the hand.

If you want to change to hand-held mode, you simply pull the Switch out of the dock, unclip the Joy-Cons from the mount and attach one to each side of the console. At this point, the Switch looks like a slimmer version of the Wii U’s control pad, but feels more comfortable in the hand.

The transition takes less than a minute and can be accomplished while the game is running. In the transition, the only thing that really changes is the addition of portability. The games, the controls and the play style remain the same. And you can take your full-blow console games anywhere – as long as you keep charging the batteries. Nintendo says games consume battery life at different rates, but the upcoming “The Legend of Zelda: Breath of the Wild” will run for three hours on a fully charged battery. The top end for battery life, company representatives said, is around 8 hours.

A third gameplay option involves detaching the Joy-Cons and using them as miniature controllers for two-player action. In this mode, games can be played on either a TV or on the Switch, which has a little leg that permits it to stand upright on a tabletop.

Some of these games rely on the Joy-Cons’ motion-sensing and vibration functions. For example, “1-2-Switch” offers 28 mini-games that let players learn who’s the fastest gun in the living room, match dance moves, milk cows, play table tennis or eat sandwiches. And “Arms” features cartoonish characters who use specialized spring-loaded boxing gloves to pummel each other.

Unlike the Wii and Wii U, motion control doesn’t rely on an optical sensor bar. Everything is handled through the accelerometers in the Joy-Con. From the demos available at the road show, the motion control seems to be relatively accurate and responsive.

If you’re not a fan of motion-control or the small Joy-Cons, many of these games also accommodate a standard console-style controller, which will be sold separately.

The Switch has 6.2-inch screen that permits touch-based play, just like the popular Nintendo 3DS hand-held system. The screen can display a resolution of 1290x720, so the graphics appear much sharper than those available on the Wii U. The title that best demonstrated its abilities was the upcoming Zelda game. While the animation style was a bit cartoony, the detail and textures were much richer than the previous Zelda title, “Skyward Sword.”

The console’s retail cost will be $299.99. When you open the box, you will find the console/screen, the dock, two Joy-Cons and the necessary cables. You won’t get any games packed in.

Most games — which come on small cardlike cartridges — will cost about $60, but some less-involved titles will cost as little as $10.

The gamesSwitch’s ability to transform from a TV-based console to a hand-held device seems like a literal game-changer, but consoles rise and fall on the strength of their game catalog.

In this case, hardcore Nintendo fans will find a lot to like in the coming months. However, those yearning for more than a smattering of titles from other publishers won’t be quite as thrilled.

Titles scheduled for launch on March 3 include:

“The Legend of Zelda: Breath of the Wild,” a fantasy adventure featuring the elf Link and the land of Hyrule. The latest in the venerated “Zelda” franchise will undoubtedly be the must-have title of the Switch’s launch window. “1-2-Switch,” a party game that features 28 mini-games that rely on motion controls. This collection draws an immediate comparison to “Wii Sports” a similar showpiece for the Wii’s motion controls capabilities. The crowds in D.C. loved this game, so that bodes well for its ability to hold together even the most boring of parties. “Skylanders Imaginators,” the latest in the latest in a string of wildly-successful platform adventures that feature interactivity with real-world collectible figurines. Parents beware: your kids are going to love this one. “Just Dance 2017,” a dance game that uses motion controls. Another popular game aimed at making a fool of yourself in front of your friends, “Just Dance 2017” will be another of the party games launching alongside the Switch. “Snipperclips,” a cooperative puzzle-solving game. “Super Bomberman,” a party/battle game bringing the classic “Bomberman” formula to what Nintendo hopes is a whole new generation of gamers. “I am Setsuna,” a port of the underrated Japanese role-playing game that drew in genre fans last year. “Setsuna” rounds out a launch window that is otherwise titled a bit heavily on party/social gaming. Titles that have been announced for release before the end of the year include: “Super Mario Odyssey,” a sandbox-style adventure featuring the famous Italian plumber and his friends. “The Elder Scrolls V: Skyrim,” a re-release of the popular medieval fantasy game. “Splatoon 2,” a multiplayer shooter that features paint guns. This one was featured at the D.C. roadshow and from our hands on time with the tile “Splatoon 2” is going to make fans of the original very, very happy. “Arms,” a fighting game featuring contenders wearing whacky spring-loaded boxing gloves and other attachments. Think “Wii Sports” boxing, but you know, actually fun beyond the first five minutes. “Mario Kart 8 Deluxe,” the seminal racing game featuring Nintendo’s favorite characters. This version adds new characters, packs in all the DLC and brings back all the fan-favorite modes from the original title. Plus, mobile “Mario Kart,” is always worth keeping an eye-out on. “Has Been Heroes,” a side-scrolling, turn-based medieval roguelike that looks like a mix between “Clash Royale” and “Plants vs. Zombies.” Fans of role-playing games should keep an eye on this one. “NBA 2K18,” a professional basketball game launching alongside other console versions this fall. Sports fans on Nintendo platforms have often had to deal with lesser versions of the popular titles, an issue the company is clearly looking to address with the Switch. “Lego City Undercover,” an open-world Lego crime-fighting adventure. “Sonic Mania,” a platformer featuring the speedy blue hedgehog. This remix of levels old and new brings the titular hero to the platform in all his 2-D glory. “Rime,” a puzzle-based adventure game.Other titles that have been announced – but lack official release dates – include the soccer game “FIFA,” the fighting game “Ultra Street Fighter II,” the building game “Minecraft,” and the platformer “Rayman Legends.”