Learning to love the brutality, excitement of 'Kingdom Come: Deliverance' 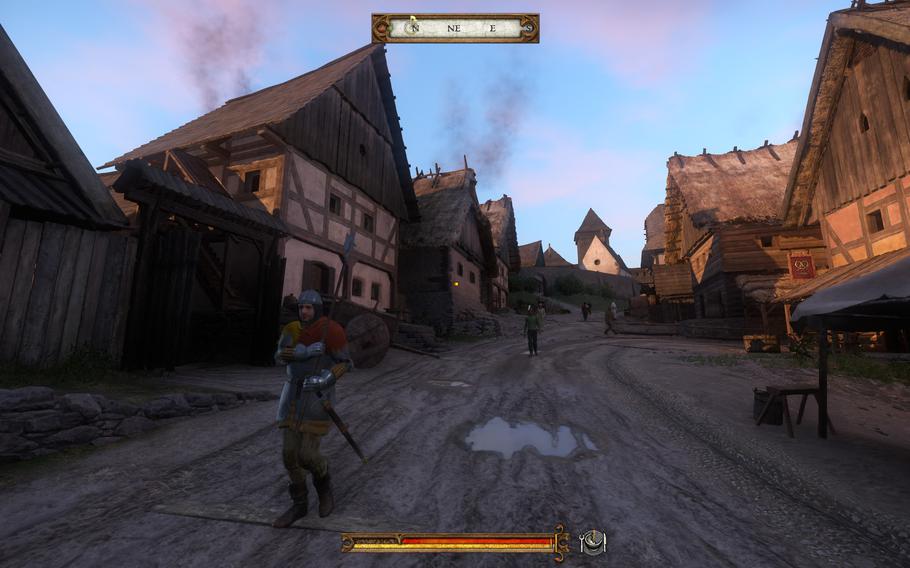 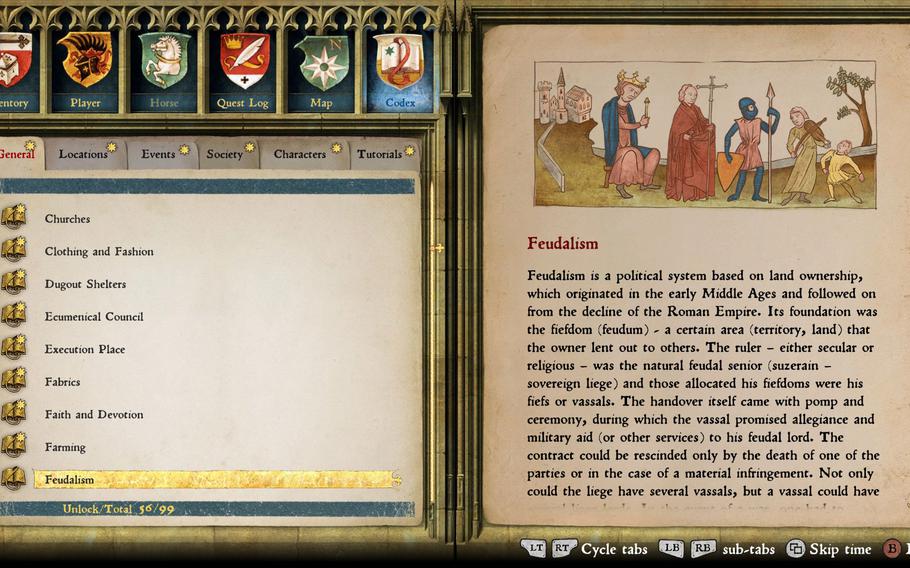 "Kingdom Come: Deliverance" is is educational and entertaining. If only there was a word for that. (Warhorse Studios) 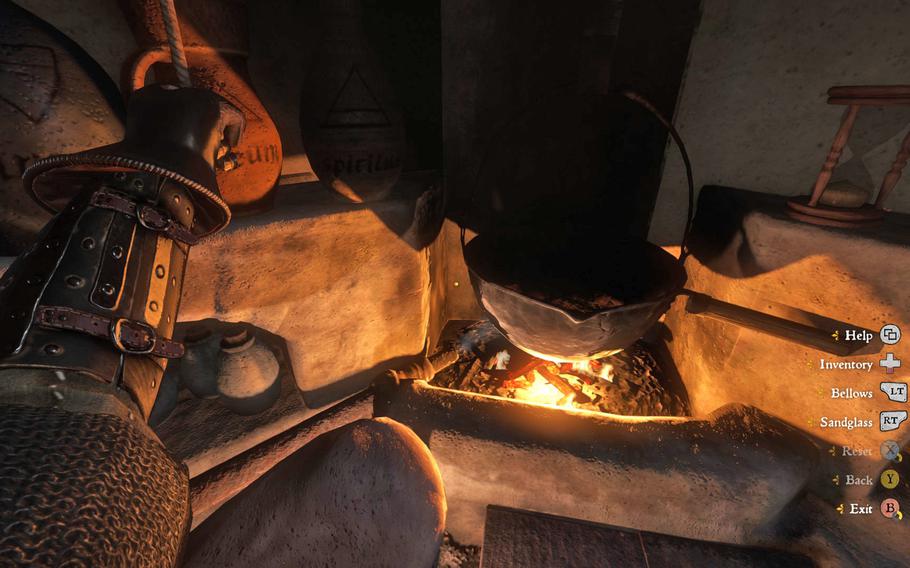 Crafting in "Kingdom Come: Deliverance" is skill based and eschews the traditional method of just tapping your way to success. (Warhorse Studios) Learning to read is an important skill in "Kingdom Come: Deliverance," not just for the gameplay bonuses, but for the world building. (Warhorse Studios) 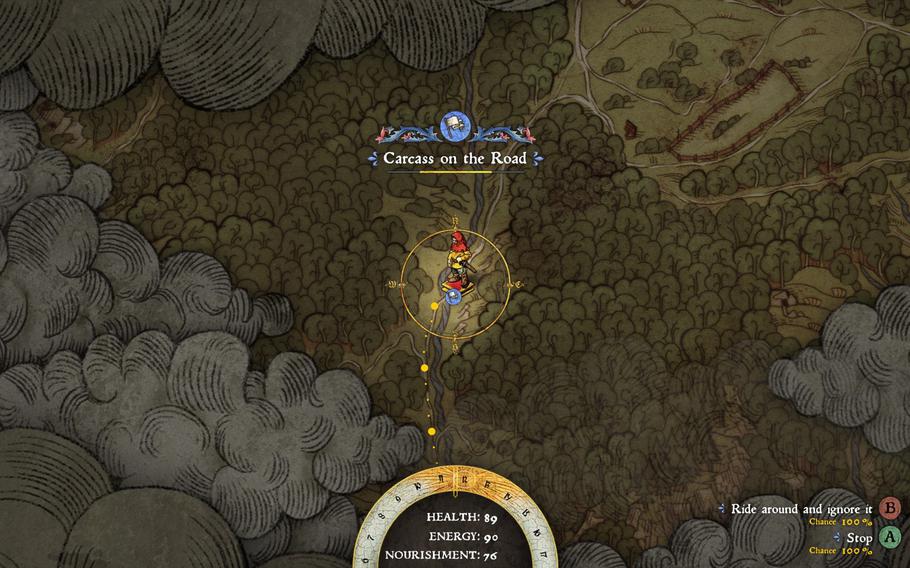 Fast travel is available in "Kingdom Come: Deliverance" but it comes with its own risks. (Warhorse Studios) Ah, the tavern. The central place for quest gathering in hundreds of roleplaying games. "Kingdom Come: Deliverance" is no exception. (Warhorse Studios) 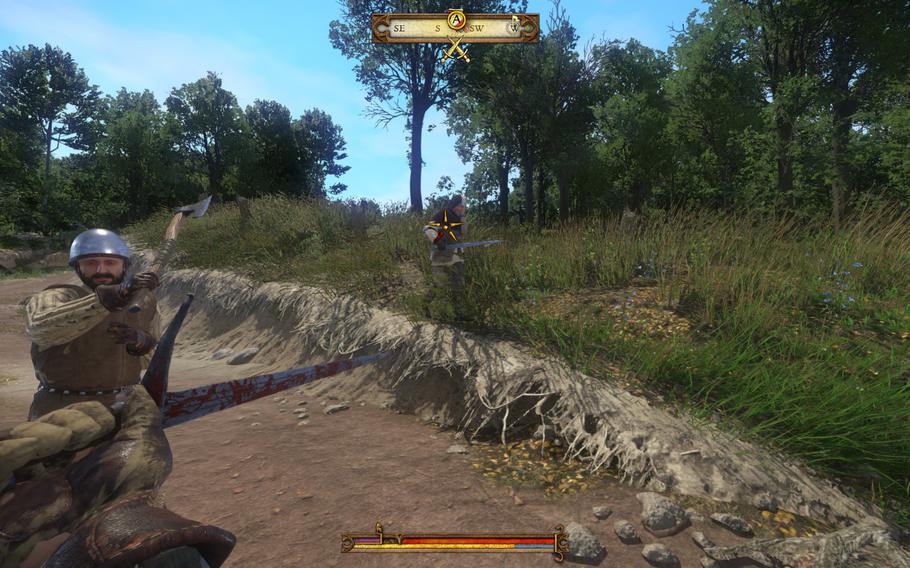 Combat is "Kingdom Come: Deliverance" can be rough in places, fun in others. In the end, it's not particularly great, nor is it exceptionally terrible. (Warhorse Studios)

The sun broke over the 15th century Bohemian landscape and I, the son of a humble blacksmith, began my day by eating a bit of dried meat, followed by a rare bath — taken in the same trough used to wash the laundry. I spent a portion of my day hunting rabbits, losing several precious arrows in the process, but finally snagging enough meat so that I wouldn’t starve before tomorrow’s end.

Alas, I was set upon by bandits and, having only a rusty axe to my name — and the freshly caught hare quickly losing its freshness — I had to flee. Luckily, I survived the encounter and will live to see another day.

Just another day in the life of Hal, the protagonist in “Kingdom Come: Deliverance,” an open-world feudal life roleplaying game by Warhorse Studios.

“Kingdom Come” is unlike any other RPG made. While plenty of RPGs have paid lip service to realism, almost all of them eventually have veered in magic, prophecies about the Chosen One or some other such nonsense. “Deliverance” offers no such tomfoolery and replaces it with chores, learning how to read and getting your ass kicked by any group of fighters better armed than yourself, no matter your level.

The story begins not unlike every other roleplaying game on the market. As a unassuming resident of an even more unassuming village, Hal is destined for a lifetime of humdrum routine and boredom. After a raiding party torches the town — not over some search for a magical MacGuffin, but because of good old-fashioned money — Hal is forced to flee. This sets into motion a series events that will see this humble serf rise to the position of … well, a slightly less humble serf.

In the “Elder Scrolls: Skyrim” you’ll yawn at becoming the head of your 12th guild because you’ve put no real effort into getting there. “Skyrim” tells you where to go and exactly how to proceed, and it generates loot and enemies commensurate with your level. In “Kingdom Come,” you’ll be ecstatic when you fend off a couple of bandits and find a sword that isn’t rusted through.

To some, the decreased level of import put on the player character may be off-putting. To a lifelong fan or roleplaying games, I found it refreshing and immersive in a way that few other games have managed. It’s a true entry into the genre — you’re given a role and you’re forced to play through as that role.

That role just happens to be a nobody in a world full of them. Small touches in the game’s mechanics help sell the fact that Hal isn’t the center of the universe.

When asked to go talk to somebody at a specific time and place, should you choose to go pick flowers in a meadow instead, don’t be surprised if the quest begins without you. Go to talk to somebody who is in bed for the evening and instead of them standing up to engage with you, they’ll tell you to sod off until a more appropriate time. Walk into somebody’s bedroom uninvited and be prepared to face the wrath of the village guard for the crime of trespassing.

Attention to detail in these and other gameplay systems, from weapon maintenance to brewing concoctions, are left to players’ grasp of common sense and skill, rather than their ability to lazily tap a button. If you want to sharpen a weapon, for instance, you’ll have to manually adjust the angle of your blade, apply pressure with the thumbstick and tap the left trigger to pedal the whetstone wheel. You have to pay a scribe to learn how to read, and so on.

In short, “Kingdom Come” puts the roleplaying back into the RPG.

It’s not all roses and sunshine, however. As a team, Warhorse has created a fantastic original IP into one of the hardest-to-create genres out there. So many things can go wrong with open-world games that even seasoned development teams with enormous budgets still find it difficult to rein in bugs and smooth out rough game mechanics.

That’s no different here with “Kingdom Come.” Disregarding the expected graphical glitches and quests not always firing off the way they’re supposed to — again, all open-world RPGs have these issues — there are still some fairly big issues in “Kingdom Come.”

Combat is the least of the three major issues. Battles are best as one-on-one affairs. In those, the back and forth of the combat system shines — its reliance on solid, well-placed strikes can be navigated skillfully. However, when any more than a couple of combatants are tossed into the mix, the combat becomes overly frustrating. It wasn’t designed for mass encounters, that much is clear, which makes it even more annoying when the game continuously throws small hordes of enemies your way.

Still, those encounters sometimes can be maneuvered around (other times not) and eventually, with the right type of equipment, the bigger fights become more manageable. In the end, the combat ends up as a wash — it’s not great, but it’s not terrible.

That can’t be said for two mechanics that ultimately bring down “Kingdom Come:” the broken thieving mechanics and the unwieldy save system.

While using a controller, the lockpicking mechanic simply does not work as intended. In theory, you’re supposed to hold the right thumbstick in a “sweet spot” while rotating the left stick. That doesn’t really work all the time with a controller. With a mouse-and-keyboard setup it’s a bit easier, and easier still if you have a mouse with which with you can adjust the DPI. But on a controller, forget it.

But honestly, the lockpicking mechanic can be ignored. What can’t be ignored so easily is the save system.

Unlike every other open-world RPG made, you’re unable to save at will. You can brew or purchase special potions that allow you to save when you’d like, but they’re expensive and hard to come by. Without those, you’re forced either to hunt down a properly owned or rented bed or to rely on an autosave system that spaces its saves too far apart to be of any use.

Glitches are to be expected. No developer on this planet has created a bug-free open-world game. But there is a reason those games have allowed users to save at will. Losing large amounts of time or having to relive cutscenes because of a poor choice I made in game is acceptable. Losing progress and having to replay 30 to 45 minutes because of a bug I had no control over is not.

In fact, these two mechanics are so poorly implemented that the first two major mods created by fans are attempts at fixing them. Warhorse also has tweeted out that both mechanics are under review for potential patching in the future. If they’re fixed, “Kingdom Come” may be about as close to perfect of a first-time open world RPG as can be expected.

The world is beautiful, the voice acting is really top notch — no “Elder Scrolls” dull line delivery here — and the strict adherence to building a believable landscape elevates “Kingdom Come” far above its current peers.

It’s rough around the edges, and certainly, playing as a fairly unimportant serf isn’t for everybody. But those gamers with a little patience and a lot of tolerance will find much in “Kingdom Come” that other games simply haven’t been able to provide.

In a world with infinite me-too copycats and dull, fetch quest-laden roleplaying games, an entirely new take on the old formulas — even with its bugs and couple of less-than-stellar mechanics — stands out.

Grade: B- Platforms: PC (reviewed), PlayStation 4 and Xbox One Website: www.kingdomcomerpg.comA copy of this game was provided for review purposes.