'Hearthstone' has new competitor in 'Magic: The Gathering Arena' 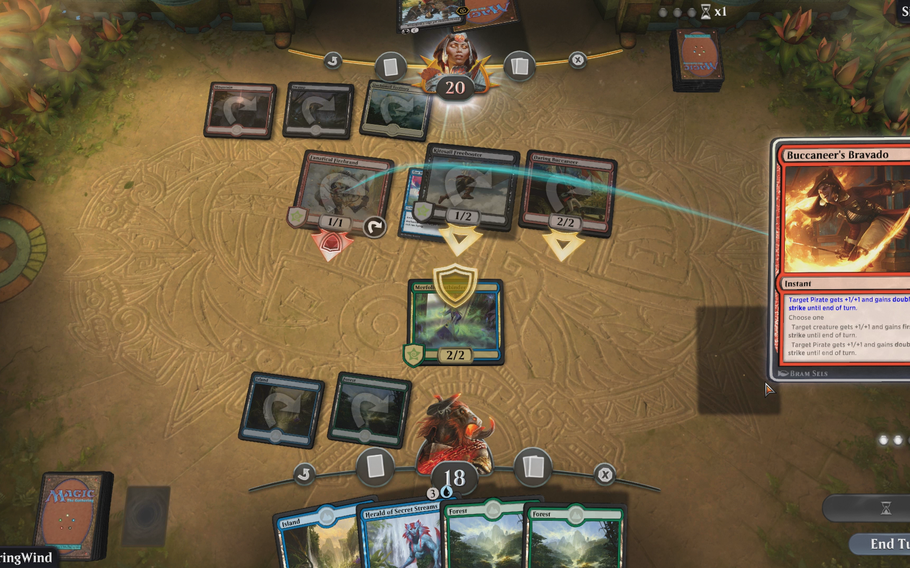 “Magic: The Gathering Arena” is finally the flashy, exciting online version of the decades old game for which fans have clamored. (Wizards of the Coast)

“Magic: The Gathering Arena” is finally the flashy, exciting online version of the decades old game for which fans have clamored. (Wizards of the Coast) Cards in “Magic: The Gathering Arena” are earned largely by winning enough games to open randomized packs. (Wizards of the Coast) Right now, only the most recent sets of “Magic: The Gathering” are in “Arena.” More cards will be added as new sets are released. (Wizards of the Coast) “Magic: The Gathering Arena” has many of the bells and whistles that helped Blizzard's "Hearthstone" become the most popular online collectible card game. (Wizards of the Coast) 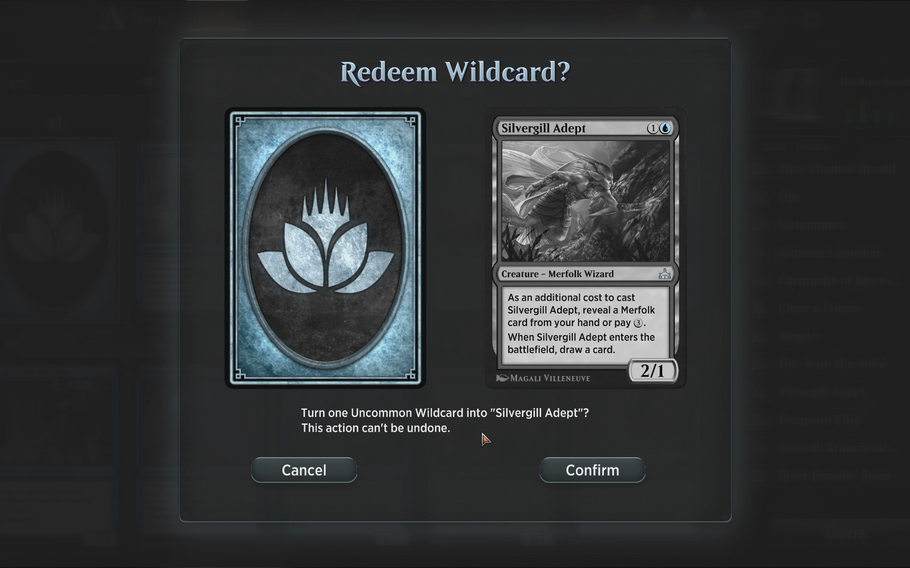 Wildcards provide players of “Magic: The Gathering Arena” a method to unlock cards they haven’t opened via random chance. (Wizards of the Coast)

Magic: The Gathering’s unmatched longevity, popularity and intricacy has made it the gold standard for collectible card games. For decades, Wizards of the Coast dominated the genre and expanded its physical cards into various online offerings, the most popular of which is the simply titled “Magic: The Gathering Online.”

While “Magic: The Gathering Online” continues to draw in customers, its dry presentation and clunky interface can’t even begin to compare to Hearthstone’s charm and visual beauty.

In an attempt to better compete, Wizards attempted to pivot their entry-level “Duels of the Planeswalkers” into a closer analog of Hearthstone. However, that game didn’t offer a true Magic: The Gathering experience, and updates lagged behind their real-world offerings.

As a result, it was not well received, and Wizards abruptly canceled it in June 2017. But as the saying goes, if at first you don’t succeed, try, try again.

Enter “Magic: The Gathering Arena,” an online-only version of the game that is attempting to bring together the glamour of Hearthstone and the deep, intricate play of Magic.

And man, does it ever deliver. At least as far as the game and presentation goes.

“Arena,” even though still in beta, is an enormous step up from both Duels and Magic Online. It has an almost complete Magic experience with four cards per deck, lack of rarity restriction in deck building and priority holding that Duels lacked.

If some of those things don’t make sense, don’t worry. Basically, “Arena” replicates building a deck and playing it against an opponent almost perfectly, with plenty of flash and style to make it almost as interesting to watch as it is to play.

When a powerful card hits the battlefield, colorful animations explode from the card and appropriately epic sound effects follow every action, from countering spells to smacking an opponent for massive damage.

In short, visually speaking, it is to MTGO what “Jet Set Radio” is to an Excel spreadsheet.

But “Arena” still has a long way to go.

There are little things that need tweaking — deck building is a little clunkier than it needs to be, phase stops during the games themselves are finicky and autotapping of mana can lead to game losses.

But those issues pale in comparison to the economy, which, to be fair, is still a work in progress. In fact, it’s so much in flux that for the moment actual money can’t be spent on the game and progress and card collections are still being reset with major updates. At the moment, the economy is simply unacceptable.

Cards can be earned by winning enough games — right now it’s five games per week — to earn a pack. Packs contain eight cards and some of those cards can be “wildcards” that can be swapped for any card of corresponding rarity.

Individual, random cards are also earned by completing quests — for instance, cast 15 blue spells, play two games with a certain type of deck, etc. Opening packs also feeds into the vault, which slowly ticks up and once opened, gives you more rewards.

And at some point, gems — a funny money currency — will become available for purchase, but Wizards has yet to reveal how those will factor into the economy.

All of this sounds reasonable, at least on paper, leaving plenty of methods to earn cards without spending a dime and a potential avenue for purchasing packs of cards.

However, the reality of the system is much harsher. Magic is a game that serves many masters. The casual fans, the people who only play drafts — a popular format in which eight players open three packs of cards, select one at a time and pass them around, then build decks out of the random pulls — and the hardcore grinders.

It also has a larger deck building foundation than Hearthstone. In Hearthstone, players are limited to two versions of any one card. In Magic, it’s four copies — and often, the most powerful and/or fun decks require full playsets of multiple cards. The base resource for Magic — the land cards — are also assigned rarities.

And Magic rarities — while sometimes indicative of power level — can also be meaningless in terms of playability. Mythic rare cards — the cards that you maybe get three to six of per 36 packs — are unplayable in most formats. In fact, by design, only a small percentage of any given Magic set are playable in constructed formats — the formats in which you build decks out of all the available card pool.

What this means for “Arena” is that the random packs opened have a very high chance of rewarding players with absolutely nothing. This is also true in paper Magic, but then again, packs aren’t supposed be opened to build entire decks.

If you want to build that cool dragon deck, you head to the comic shop and buy the cards you want individually. That same holds true for Magic Online, albeit in a more roundabout way.

At the current rate, the average player can hope to open a pack about every other day. Once in a blue moon, a day will provide you with enough timed missions and a lucky vault opening to provide up to three packs. That is a very rare occurrence. Eight to 10 cards every other day is about what you can expect.

What that means is that before being able to play with the deck of their choice, players have to grind for at least weeks, more likely months. New card sets come out roughly every four months, and each new set makes old decks obsolete.

This is also true in paper and in MTGO, but in both of those there are ways to sell back or trade away old cards to recoup some costs so that they may be reapplied to newer decks. In “Arena,” that’s not going to be allowed, and there is no dusting mechanic.

Basically, “Arena’s” economy is ripped almost straight from Hearthstone, without the considerations of the differences between the two games. It’s simply non-functional at this point.

But again, “Arena” is still in beta. The economy isn’t yet set in stone. The game has a long way to go before it’s properly released. Plenty of features like drafts and (hopefully) other formats have yet to be introduced. There is still plenty of time for Wizards to fix the broken economy.

And I hope they do. After years of playing the dry-as-dust Magic Online, “Arena” feels fresh, exciting and snappy. They have an excellent foundation built, but time will tell on what type of building they build upon it.

Will “Arena” be “Duels” 2.0? Or will it finally become the “Hearthstone” competitor that Wizards has envisioned? Make that call yourself by checking out the beta.