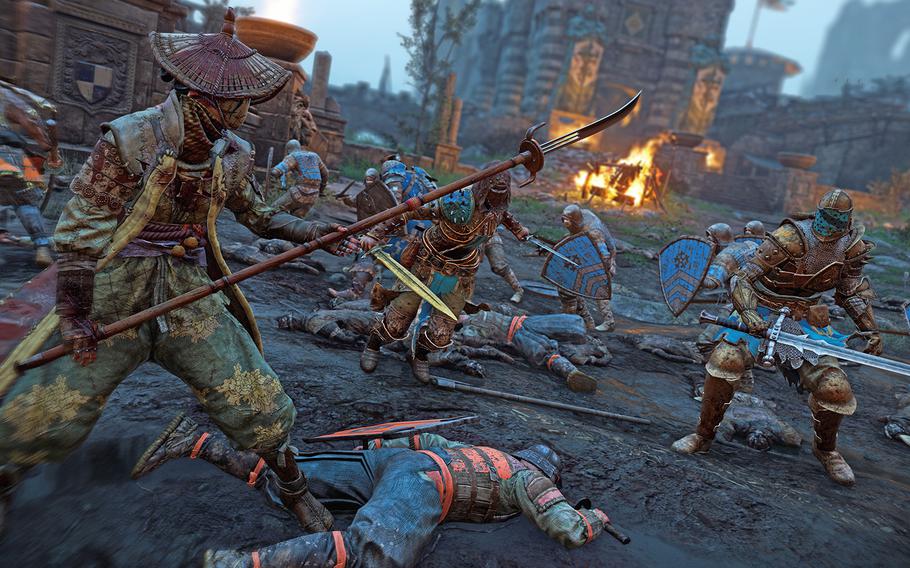 A Japanese Nobushi, left, faces a European knight in a Dominion multiplayer match in “For Honor.” (Ubisoft)

A Japanese Nobushi, left, faces a European knight in a Dominion multiplayer match in “For Honor.” (Ubisoft) 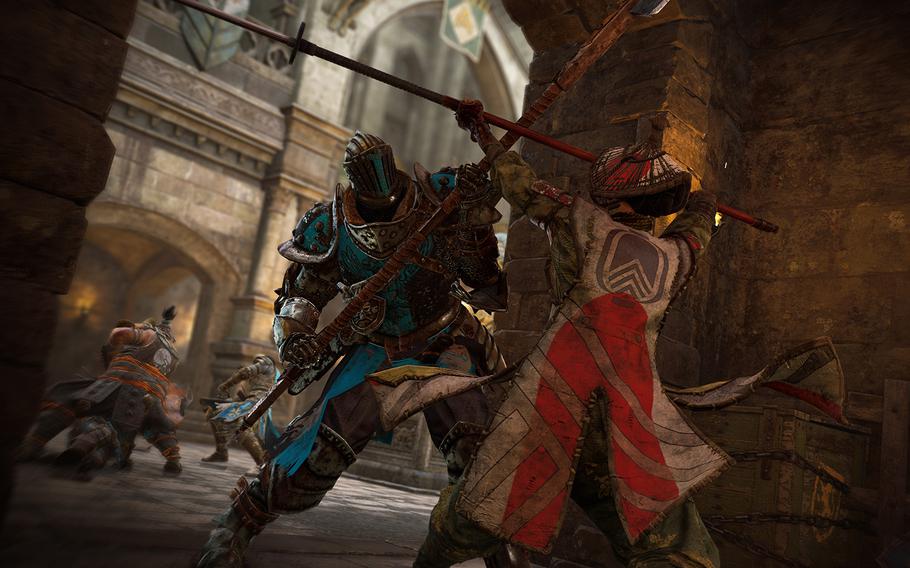 A Japanese Nobushi tries to block an attack by a Lawbringer, one of the warriors among the European knights in “For Honor.” (Ubisoft)

The Ubisoft game is set in a medieval world where Japanese samurai, Scandinavian Vikings and European knights rule adjacent kingdoms and are frequently at war.

A millennium of conflict ignited when tectonic upheaval drove the samurai from their homeland and sent them marching westward until they bumped into the Vikings and knights. You join the action just as an unusual period of peace is starting to crumble.

In the game’s single-player campaign, you spend six missions with each culture and discover what’s stirring up the trouble. The missions tell a story but also serve more as an extended tutorial for the multiplayer mode. They’re basically a fun way to discover a little about the world of “For Honor” and learn how to play the warriors each cultures have to offer.

Combat relies on a mechanic called the Art of Battle. This tries to bring a more realistic feeling to melee fighting than is seen in most other video games. It recognizes that no real human being could defend his left side and then attack from the right side unless he changes stances.

Once you’ve locked on to an enemy, you position your weapon to guard against attacks from the right, left or above. Then, you can attack or defend only from that position, which leaves you vulnerable to assault from the other two directions. The idea is that you should attack an enemy where his guard is lower and raise your guard toward the direction he’s favoring. As a result, most successful attacks are preceded by a quick change of stance. You can switch your stance almost instantly but you do have to make a conscious decision to switch.

Standard attacks come in the light and the heavy variety. Warriors can also dodge attacks, break an opponent’s guard or throw their opponent in certain circumstance. In addition, each warrior has several unique moves that can be unleashed against the enemy by pressing button combinations, some of which can be difficult to pull off before another warrior starts pounding on your head.

While enemies in the campaign can prove challenging, things get much more interesting when you jump into the multiplayer mode and face unpredictable human foes. This is when the Art of Battle mechanic demands nimble fingers and a keen eye.

To help overcome the learning curve, the game provides tutorials for each of its 12 heroes and allows you to hone your skills against computerized foes in each of its multiplayer modes.

Each of the three civilizations can field four types of warriors: the basic fighter, the quick and deadly assassin, the well-armed and well-armored heavy fighter and a hybrid that combines characteristics of two other classes. Each type has his or her own weapons and armor, strengths and weaknesses and special attacks.

In each match, players acquire gear from the battlefield and experience that can be used to enhance their characters’ combat abilities.

The quintessential multiplayer mode is Dominion, in which two teams of four players fight over three different zones on the map. There are two “death match” modes that let players duke it out without regard to territory: Skirmish, which allows fallen players to respawn, and Elimination, in which death is final. In each of these modes, computer-controlled minions add to the action – primarily serving as a means of padding your score. Most go down with a quick press of a button.

In these team-based modes, cooperation is essential. Even if you don’t have to worry about capturing and holding strongpoints, you need to work together. If one player is cornered by two opponents, death is virtually certain.

If these multiplayer modes seem a bit too crowded, there’s Duel, in which two players go head-to-head, and Brawl, in which two two-player teams face off.

The game comes with a dozen multi-player maps, each of which comes with different time and weather options.

"For Honor's" graphics are very good. Character renderings are detailed and motions are lifelike. Each type of warrior has his or her own moves and stances. Each kingdom has its own look and feel. The knights live in sturdy stone castles set in lush forests. The Vikings make their homes in wooden forts nestled in craggy, snow-topped mountains. And the samurai have established their kingdom in a marsh and live in traditional Japanese castles. The details in each land seem to be true to their setting and created with care.

The game earns a mature rating thanks to copious amounts of blood and beheadings.

Whether you enjoy “For Honor” will be determined by your feelings about Art of Battle. It has more in common with a fighting game like “Tekken” than with “Skyrim” or other medieval action games. Those who master the mechanics will find a lot to enjoy.