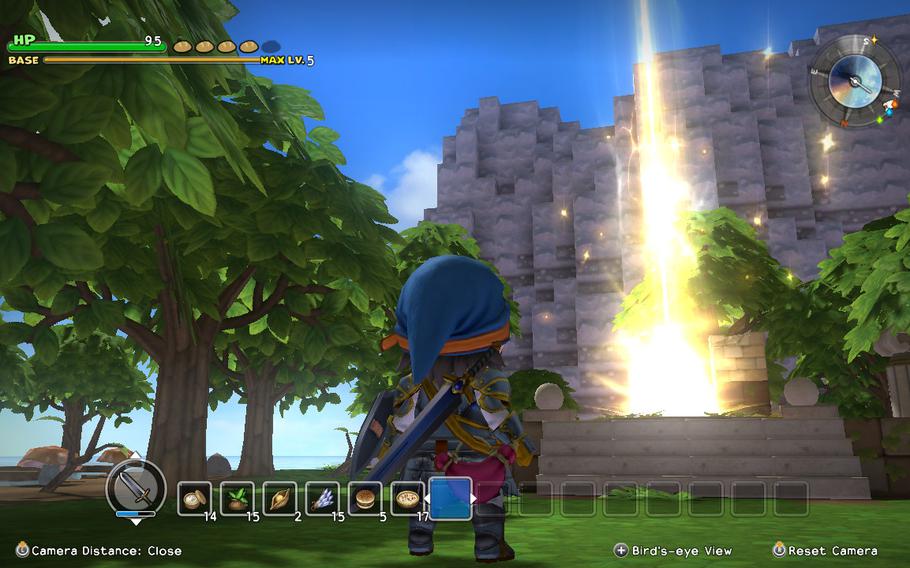 Dragon Quest Builders mixes familiar visuals and gameplay with just a dash of uniqueness and a veneer of charm. (Square Enix Co.)

Dragon Quest Builders mixes familiar visuals and gameplay with just a dash of uniqueness and a veneer of charm. (Square Enix Co.) 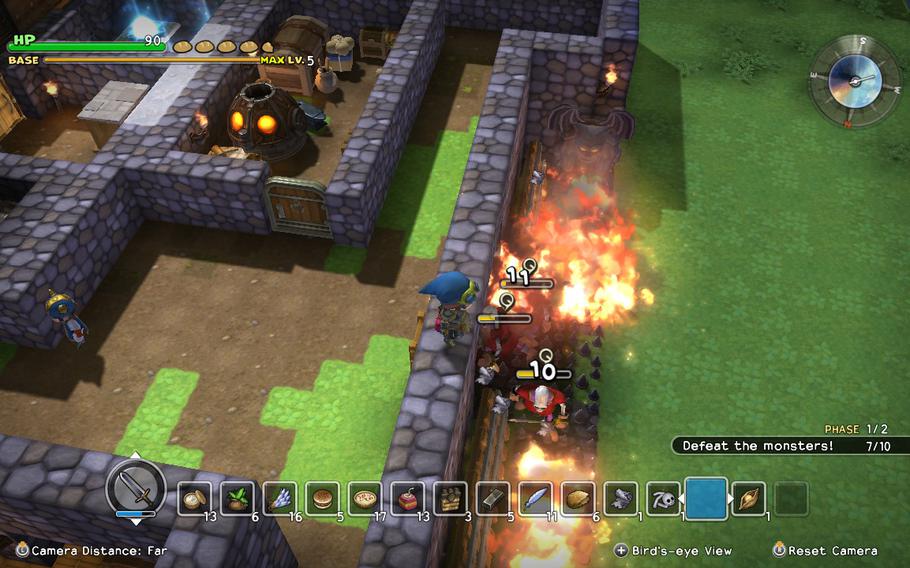 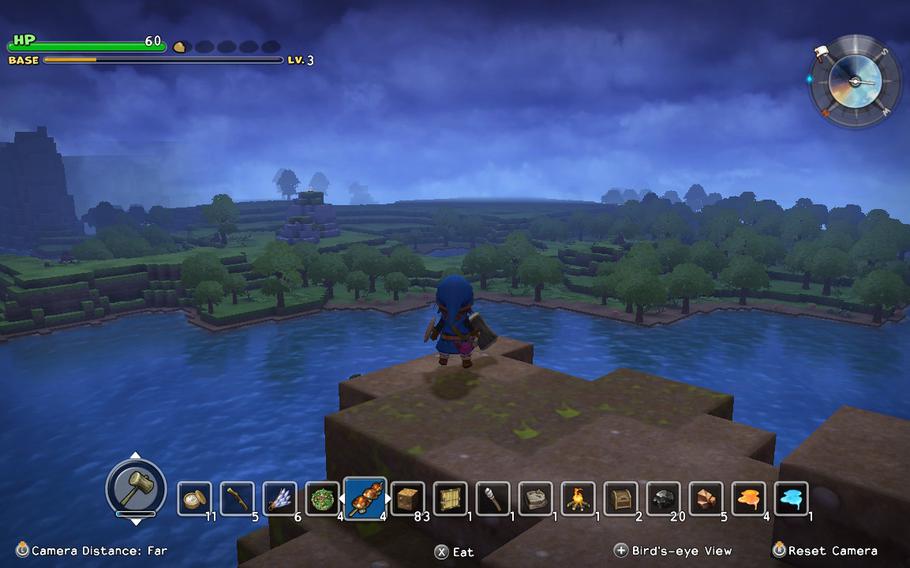 Managing hunger is a small part of Dragon Quest Builders, but it's non-obstrusive easily taken care of with items found while exploring the world. (Square Enix Co.) 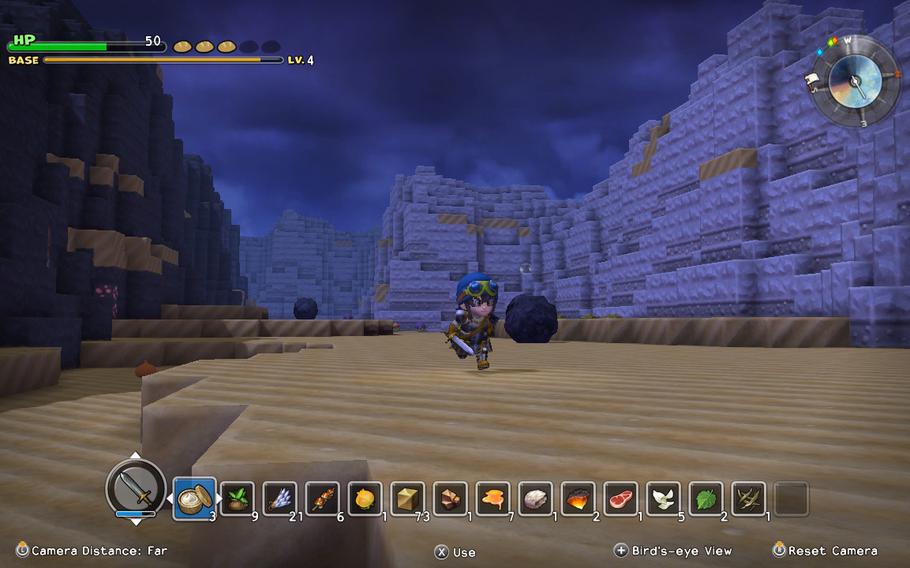 Despite its blocky terrain, Dragon Quest Builders feels wholly different than the dozens of Minecraft clones on the market. For starters, it's actually good. (Square Enix Co.) 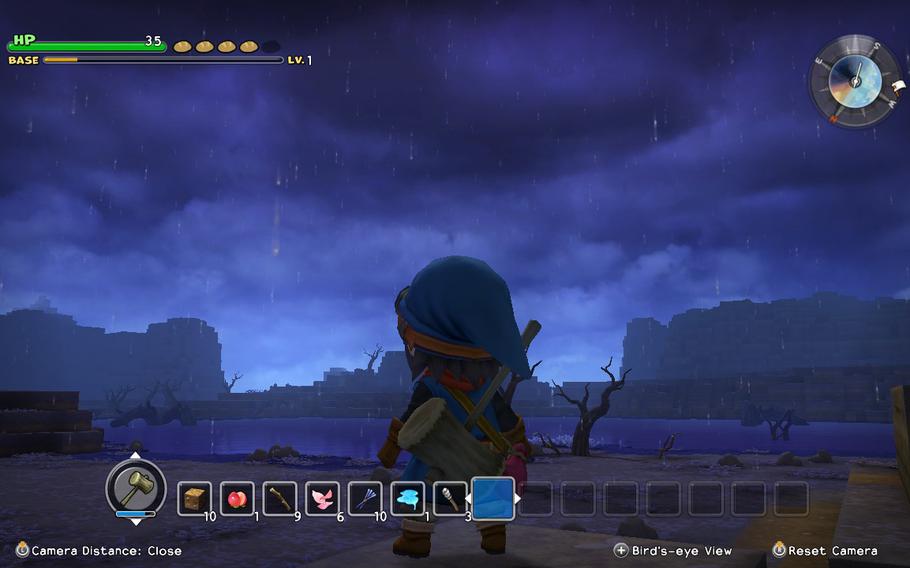 The main story of Dragon Quest Builders is broken up into four chapters, each with its own theme. (Square Enix Co.)

Voxel-based crafting games are about as omnipresent as they are boring. After endless, poorly-made clones of the uber-popular “Minecraft” I can hardly blame folks for ignoring any game featuring blocky graphics.

That would be a huge mistake when it comes to the recently re-released Switch version of “Dragon Quest Builders.” Originally released back in 2016 for Sony platforms, this Japanese roleplaying-meets-town builder takes the genre that Notch popularized and made it fun again.

And it’s still a ton of fun, nearly two years after its initial release. A lot of that has to do with the bite-sized nature of the game’s quest structure and the inherent charm infused in every voxel of “Builders.”

If you missed the game the first time around, what differentiates “Builders” from the “Minecraft” clones is the focus on a story progression and the mash-up of traditional roleplaying game elements with build-what-you-want mechanics.

You play as the Builder; a human gifted the ability to build things in a world that has forgotten how to create. The evil Dragonlord has taken over Alefgard and its up to you to not only defeat the him, but to rebuild the shattered world in the process.

The game is broken up into four chapters, each with its own flavor and an escalating technology tree and difficulty.

At the start of each, the Builder is given a plot of land and tasked with building up a town. From here, the building mechanics will seem familiar to most gamers. You’ll collect wooden sticks to make rudimentary tools, dig up dirt chunks and begin to build.

There are a few mechanics that veer off from the normal formula, however.

As the Builder is being tasked with creating a town, and not just the world’s most radical castle, he – or she if you choose – will be given specific blueprints and directives from residents that begin to filter into your burgeoning town.

When a resident requests a bedroom, for instance, you’ll have to make four walls, at least two blocks high, add a bed, door and a source of light. A kitchen requires those elements, plus a cooking appliance. And so forth.

Another key difference between “Builders” and other crafting games is the limited amount of space you’re given to build in. While you can technically build anywhere in the world, the plot of land in which you can build rooms that count toward quest completion is fairly limited. That limitation can be a bit frustrating at times, but it does force players to be very creative in how they design their towns.

Many of the materials you need to build up your town can be found in the blocks around the town’s limits. Many more, however, are dropped by monsters. This is where the traditional RPG elements come into play.

The Builder will have to craft weapons, armor and food and venture outside of the relative safety of the town in order to find many of the required materials. Combat is fairly straight forward – walk up to an enemy and whack it with your sword until dead – but is engaging enough to be fun for adults and easy enough so that kids of all ages can get through it without much trouble.

Monsters will also occasionally raid the town, but thankfully the villagers lend a hand in driving them off. In fact, building certain types of rooms will give the townspeople better weapons and health. They’re quite handy to have around in all but the end of chapter boss battles.

During those fights, anything that you built outside of the town limits will temporarily disappear and the villagers will cower inside the village walls until you’ve defeated the boss. The bosses diverge a bit from the normal flow of combat, but again, they’re not so challenging that most younger players won’t be able to beat them back.

Once a chapter is done, you’re divested of all your items and dropped into a new chapter. You can go back to previous chapters and continue to build to your heart’s content, but for all intents and purposes, each chapter functions as its own mini-world.

For those less interested in being so restricted, finishing off the first chapter opens up “Terra Incognita” mode, which functions as “Builders” free play mode. You’ll have to complete other chapters to unlock more advanced crafting recipes, which is kind of a bummer. But you can share your creations, and even summon others’ unique structures into your world.

Most of this is old news to PlayStation and Vita owners, as the game came out quite some time ago on those platforms. But this is a new title on the Switch and while I enjoyed my time with it on the big screen, the short missions and ease of saving make this perfect to play on the go.

There wasn’t any discernible performance difference between docked and undocked play, either. It’s not fair to say this is the definitive version of the game, but if you have a PlayStation 4 and a Switch and haven’t played it before, why wouldn’t you want it on the system that gives you the most options in how to play it?

And it is worth playing. Outside wanting a more expansive build area, the game is basically perfectly executed. The enjoyable crafting and simple-to-play features, wrapped in the classic Akira Toriyama visual aesthetic make “Dragon Quest Builders” a title that really shouldn’t be missed by any Switch owner.

Grade: A+ Platform: Nintendo SwitchA copy of this game was provided for review purposes.