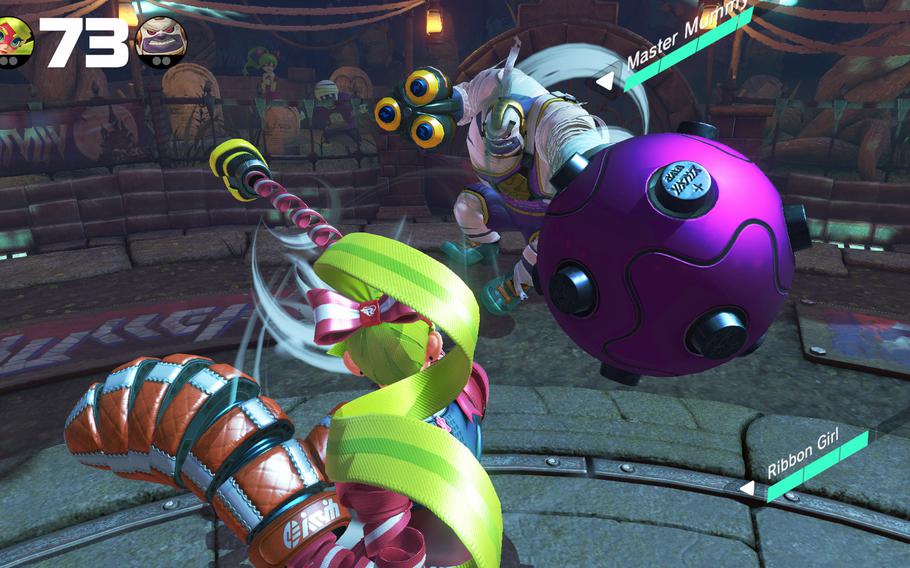 Nintendo's "Arms" features a chipper cast of pugilists and its motion controls make it very enticing, both as a party game and an inoffensive title parents can feel safe to give to young gamers. (Nintendo)

Nintendo's "Arms" features a chipper cast of pugilists and its motion controls make it very enticing, both as a party game and an inoffensive title parents can feel safe to give to young gamers. (Nintendo) 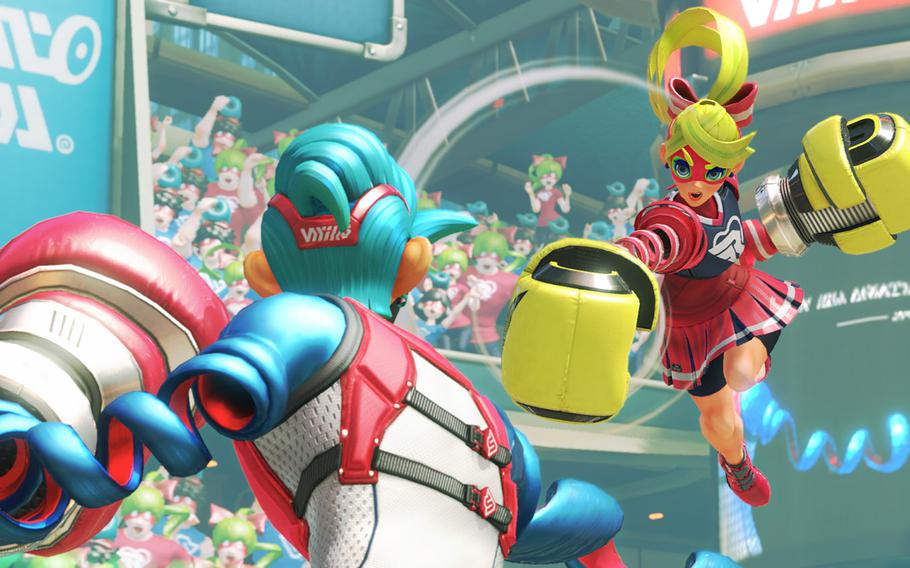 The cast of Nintendo's "Arms" is varied, unique and all have their own traits. (Nintendo)

“Arms,” Nintendo’s most recent addition to its growing Switch library, is a bright, colorful brawler that is sure to be high on many a child’s summer gaming wish list.

Its chipper cast of pugilists and motion controls make it very enticing, both as a party game and an inoffensive title parents can feel safe to give to young gamers.

But lurking just below that kid-friendly pastiche of neon hues and silly characters lies one of the most difficult games I’ve played since “Dark Souls.” Parents, be warned: This game will likely cause more than one temper tantrum.

To understand why, let me explain the basic concept of “Arms.” It’s an arena-based fighter in which wacky, stretchy-armed pugilists face off, throwing punches at each other from dozens of yards away. Emerging victorious depends less on memorizing combos and more on using position and dodges to your advantage.

“Arms” is also Nintendo’s first foray into the fighting genre on the Switch. As such, it takes full advantage of the system’s motion controls.

With a JoyCon in each hand, you’ll throw punches at your screen and your chosen fighter will mimic the motion. Blocking is handled by twisting the top of the controllers toward one another and turning them both left or right will sidestep in that direction. Thrusting both hands out toward the screen will initiate a throw and jumping is handled with a button press.

The punch controls work more or less perfectly. This is obviously a big deal in a game revolving almost entirely around throwing punches, so let me assure you these aren’t the semi-usable controls from previous mini-games, like “Wii Boxing.” After just a few practices swings, you’ll be curving your punches with the best of them.

Unfortunately, some remnants of previous missteps remain in “Arms.” First, the JoyCon controls don’t always register at the beginning of a fight, leaving your character standing there ready to absorb whatever

your opponent dishes out. This doesn’t happen often, but it happened about five or six times during my testing time.

In the grand scheme of things, that’s a minor complaint. The bigger offender – and my chief complaint with the game – is the sidestepping controls. They simply are not dependable in their current state and that’s a big deal when moving out of the way is the chief defensive maneuver.

The sidestepping controls are sluggish, even when the do work. Often, though, the game simply won’t register your movements to the left or right, or the game will misinterpret your need to move forward as a deep, abiding desire to stand there and get slapped around.

Every other aspect of the controls – the punching, the jumping, the dashes, the blocks – works nearly flawlessly. I have to believe the sidestepping controls can one day be patched to functionality. Until then, I’d recommend using only the default control scheme when playing with friends, so you can ensure a level playing field.

Luckily, “Arms” also features a more standard control scheme that maps the punches to buttons, and the motion controls to the thumbstick. Unfortunately, this means missing out on the fun inherent in flailing about in meatspace. However, I found the gamepad controls necessary to move through the game with minimal frustration.

And you will absolutely encounter frustration, at least while playing against the computer AI. The enemies at higher levels adept at avoiding damage. Your punches will miss by mere pixels, your grabs will always be dodged and your super attacks interrupted the very second they’re activated. This really isn’t a case of “get good, scrub.” The enemy AI is ridiculously overpowered at higher levels.

The obvious workaround here is to simply take the fights online. There, no matter your skill level, you’ll have the proverbial puncher’s chance at victory. Unfortunately, entering ranked matches requires beating the offline Grand Prix mode at level 4. This is ostensibly the middle difficulty level, but it is still hard enough to cause some ... colorful language to spill out.

That being said, when you do get a chance to duke it out locally with a friend, or to battle online, the rough aspects of “Arms” become less

prevalent. When everybody has to deal with the same controls, the fights are much more even, and much, much, much more exciting. I mean, I still lose online, but at least I’m losing fairly. Also, the online mode that pits you and three comrades against the four-armed Hedlok provides an endless amount of entertainment.

Regardless of its flaws I’m still enjoying my time with “Arms.” There are precious few arena fighters out there and the fun of throwing punches at giant mummy monsters hasn’t gotten old yet. The Nintendo polish and cheerful aesthetic provide extra incentive to keep playing, as does the customization options.

Each of the ten fighters can equip different arms to take into battle. Some are slow and powerful, some are designed for long-range combat, others are used to combat chronic sidesteppers. They can be swapped out or even mixed and matched between fights.

Unlocking new arms is a bit of a strange process though. As you win fights, you’ll earn coins that can then be cashed in – not for an arm, or even a random loot crate – but for a mini-game in which you have a chance of earning an arm.

It’s off-putting to have to earn the chance to maybe get an arm, but honestly, the mini-game is so simple that it’s only really an issue in the abstract. In reality, I never didn’t earn an arm when given a chance.

“Arms,” is the very definition of give-and-take. While it is great fun to play against other humans, fighting the AI is the very antithesis of the concept. Earning new arms is an exciting and important aspect of the game’s health, but takes quite a bit of grinding. The cast is charming, but small. The punch controls are extremely entertaining, but sidestepping simply isn’t. The pad controls work, but something is lost in the translation from motion to standard control.

It’s impossible to gloss over “Arms’“ flaws, but it’s equally difficult to ignore its place in the current gaming ecosystem. The colorful fighter brings to the relatively new Switch a genre other Nintendo systems haven’t faired well with recently. Having a competent fighter on the Switch so early in its lifecycle is immensely promising. As is the fact that Nintendo is still taking chances with experiences like “Arms.”

Console owners have precious few new party games to play with, and as a strict multiplayer experience, “Arms” mostly succeeds. I’d recommend it as a purchase for anybody looking at it as primarily that. Folks looking for a single player experience would do well to wait and see if Nintendo is going to patch up the control and AI issues.

Grade: C+Platform: Nintendo SwitchA copy of this game was provided by the publisher for review purposes.