Ancestory: An amusing multiplayer romp that’s over too soon 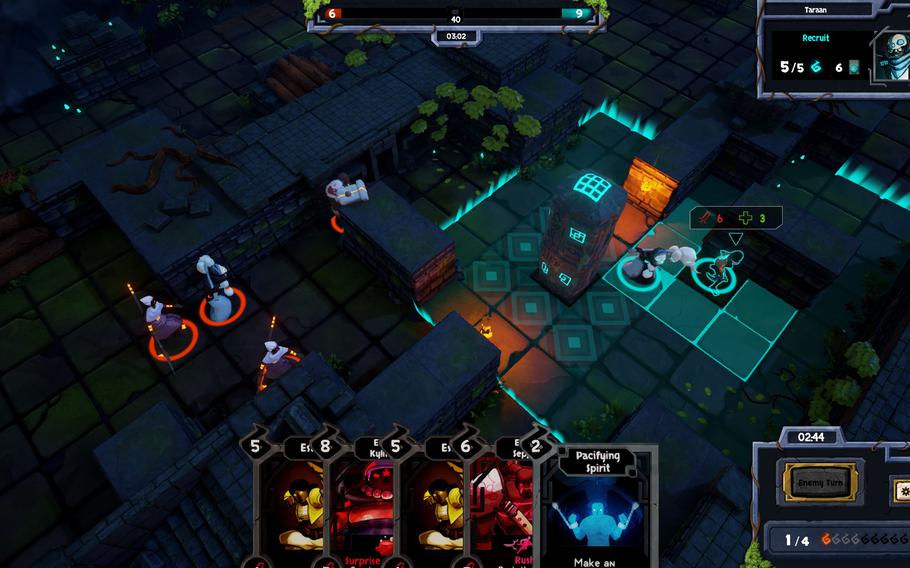 "Ancestory" melds collectible card game mechanics with strategy game sensibilities, resulting in an interesting multiplayer experience for not a lot of money. ()

"Ancestory" melds collectible card game mechanics with strategy game sensibilities, resulting in an interesting multiplayer experience for not a lot of money. () 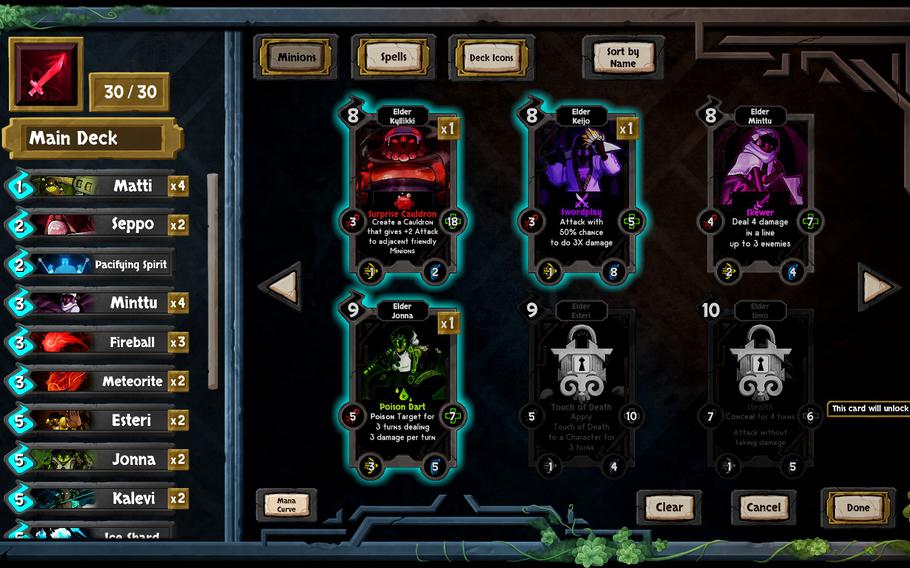 Players will create decks of 30 cards each from a limited card pool that nevertheless has enough variety to allow for several different deck builds. () 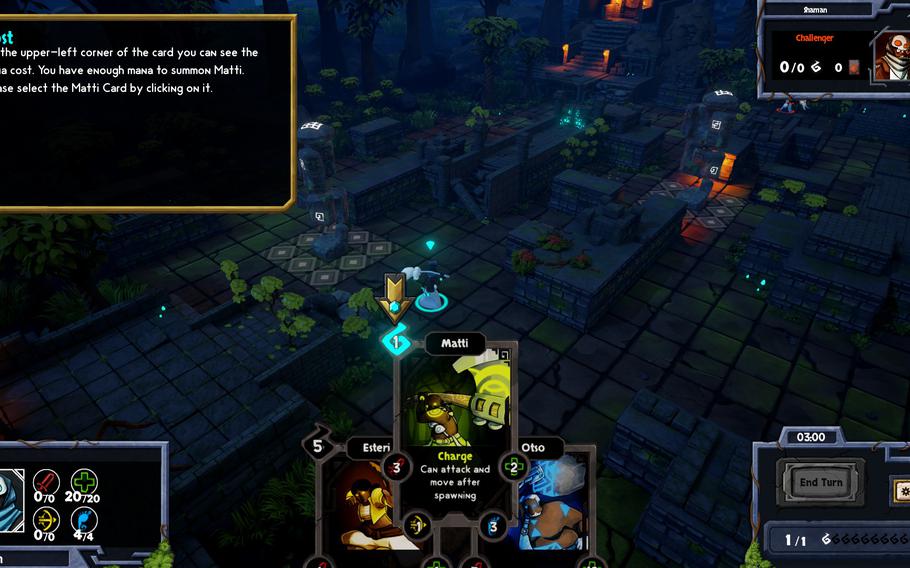 "Ancestory" has a tutorial that can be played at any time to help ease new players into the gameâ€™s mechanics. () 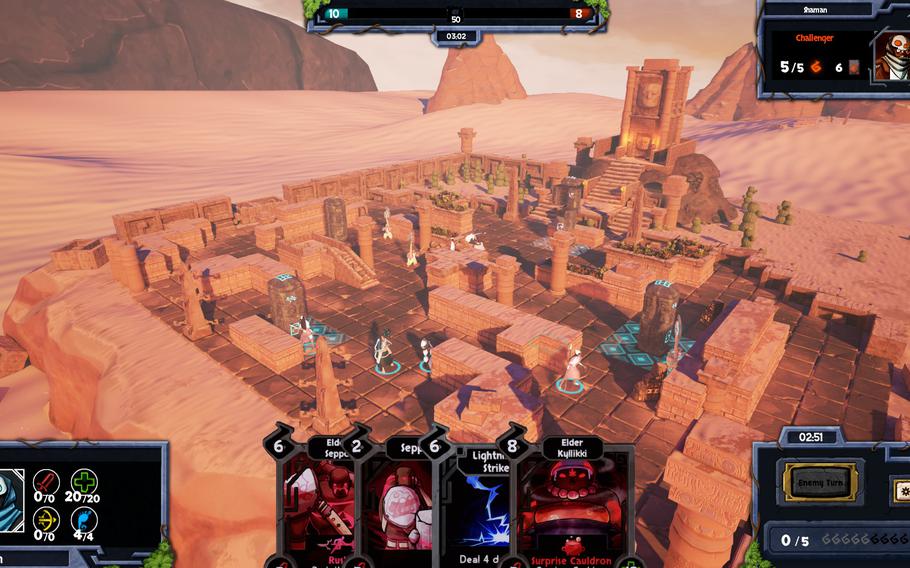 Right now, only five maps are available for players to wage war on. This desert temple was easily my favorite of the bunch. () 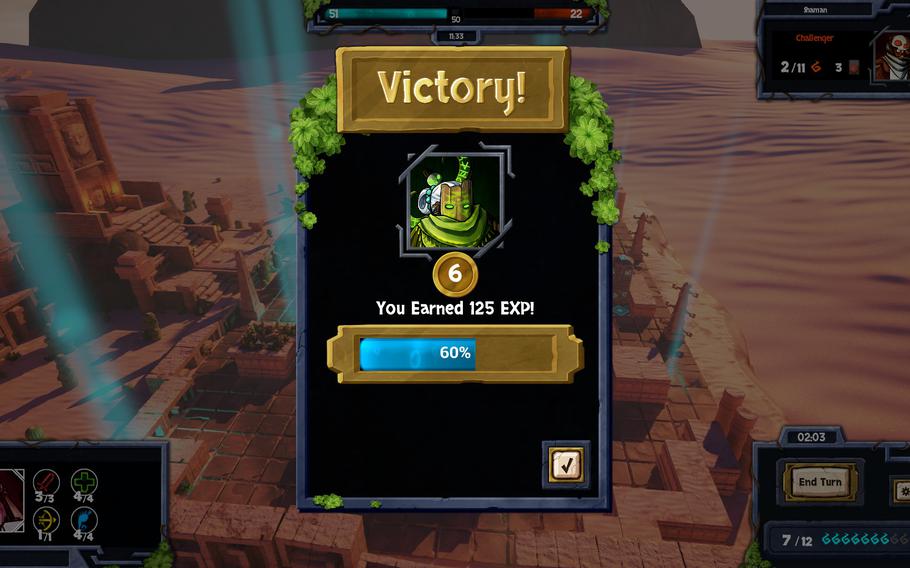 As players complete matches, they will gain levels which will then unlock a cards. There aren't many to unlock, unfortunately. () 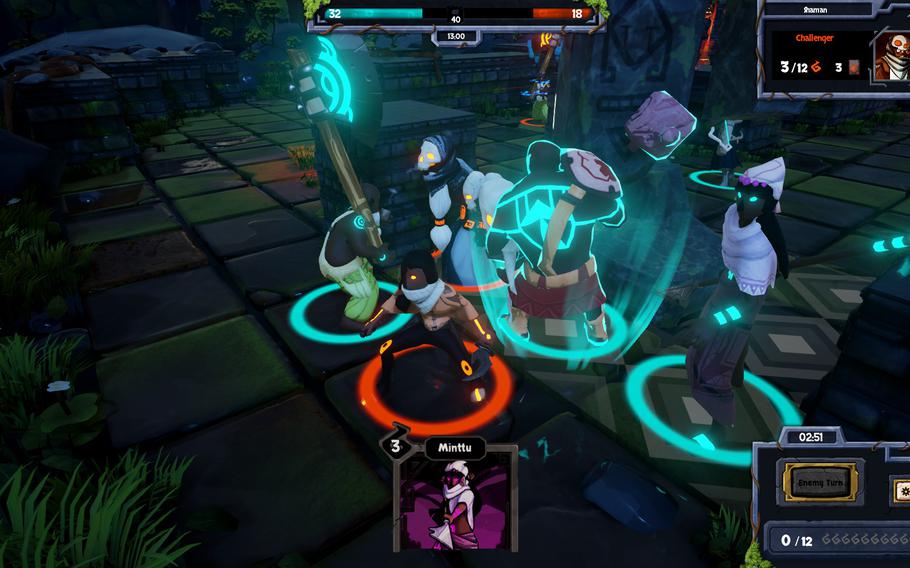 "Ancestory's" gang of minions are colorful, both literally and figuratively. They're aided by excellent animation and voice acting. ()

Video game versions of collectible card games are all the rage, thanks in no small part to the crossover success of Blizzard’s “Hearthstone” and Wizard of the Coast’s re-entry into the genre with its “Magic Duels” series.

Several would-be usurpers have come, been squashed and quickly forgotten. Smarter game developers – like Kajak Games, the makers of the recently-released “Ancestory” – who desire to tap into the craze have begun approaching the genre in different ways.

“Ancestory” does so by borrowing from those card collecting games, mixing them with a dash of strategy and then wrapping the resulting concoction in a beautiful, neon-infused South American aesthetic.

The game is a largely multi-player affair by which two players go head-to-head on an isometric, grid based map. There is also a barebones single-player mode, but it’s restricted to player-vs-AI deathmatch. More on that later.

Combat is handled with a deck of 30 cards that can summon minions to a grid-based battlefield, or cast spells that can then deal with said minions. Minions are sort of like the chess pieces of “Ancestory’s” world. Each has their own movement speed, attack, defense and attack range. Some have special abilities that can be activated during battle.

The main chess piece – the king, if you will – is the shaman. This unit acts as the player’s avatar on the battlefield and does all the spell casting and minion summoning. While the game isn’t over if an opponent kills your shaman, it does grant them a huge point bonus.

The goal of each match is to gain control of “totems’ scattered across each map. If a player moves their shaman or a minion to a space next to a totem – and an opponent hasn’t already claimed it – it’s captured. Once captured, a totem provides points each round to a player’s total. The first player to the level’s individual point goal wins the round.

Most of the five available maps will start each player near a totem that they can capture within a round or two. They’ll then spend the rest of the round fighting over one of the remaining totems. The ebb and flow of battle becomes intensely exciting as spells dwindle and the mana pool increases.

A single wrong decision can make or break a round. That’s both a feature and a detriment.

Right now, there isn’t any way to realistically mount a comeback. If you fall behind, there isn’t a lot of ways for you to be able to catch up. You get one card a turn, and one mana a turn. Kajak Games would be wise to look into more card filtering affects, smaller card draw spells and other ways to allow players to mount a comeback.

Other than that small quibble, the balance feels right. Victory usually isn’t by luck, but by picking a deck style and sticking with it.

Spells are powerful, but they won’t win you the game by themselves.

A pitfall of many collectable card games is that either the spells or the creatures are clearly the strongest part of the game. Here, expect to trade a lot of spells 1-for-1 with creatures.

Some tweaking will probably be necessary – the fireball that costs three mana and can kill most available minions, for instance – but overall no strategy seems clearly better than another. The card pool is also a bit shallow at the moment, but Kajak has shown me they’re adding new cards sooner rather than later.

I wanted to know what drove the shamans to fight. I wanted to find out the backstory of the crotchety old man smoking a pipe while swinging an axe twice the size of his body. Each minion has a personality of its own, brought to life by a clean and clear art style and excellent voice acting. The ambient sounds and relaxing musical score indicate that a lot of love and care went into crafting “Ancestory’s” world.

It’s simply just dripping with potential for storytelling but, sadly, there are no stories being told.

That’s fine for more-static, less-interesting games, but here the lack of a story mode really feels like a missed opportunity. As it is, with the exception of just a handful of card unlocks, everything in “Ancestory” can be seen in just a few hours.

Kajak promises to look into the possibility of adding more meat to the single-player experience, but for now, know that “Ancestory” is mostly focused on the multiplayer experience.

Luckily, the multiplayer features strong matchmaking that finds opponents almost instantly and a netcode that caused no lag, even on a relatively slow broadband connection. Multiplayer game developers live and die by their ability to handle the online portion of their technical execution, so it’s great to see Kajak clearly made that a priority here.

Overall, I do feel as if my time with the game was well spent.

“Ancestory” manages to mix the best of collectible card and strategy games. The game – especially from an artistic and technical standpoint – is better than it really has any right to be. Most seasoned developers can’t manage to get that stuff right, so to see it from a rookie developer is quite surprising.

“Ancestory” has some rough edges and it’s lacking a robust single-player experience, but despite these flaws I enjoyed it a great deal. If you’re a fan of either genre, or are looking for a relatively unique multiplayer experience, I’d recommend giving this a try.