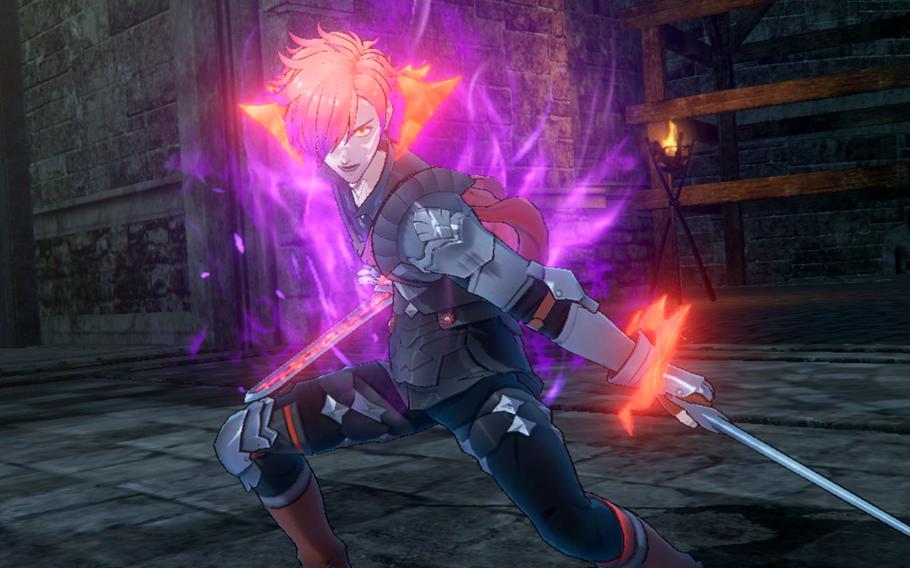 In Fire Emblem Warriors: Three Hopes, you play as a mercenary by the name of Shez, fighting alongside one of three houses in the fantasy land of Fódlan. (Nintendo)

Fire Emblem Warriors: Three Hopes is the latest Japanese role-playing game to arrive on the Nintendo Switch. Like Persona 5 Strikers and the Zelda spinoff Hyrule Warriors: Age of Calamity, Three Hopes takes a beloved franchise and storyline — in this case, Fire Emblem — and adds hack-and-slash combat to it.

Three Hopes would be a dissatisfying title if it were enjoyed on its merits alone and not connected to the Fire Emblem franchise; in short, it's a grind. On the other hand, it's a game totally designed for eager fans, who will get exactly what they want from it — whether that's dating old flames, an electrifying soundtrack or the chance to see powerful characters' attacks adapted into the Musou fighting genre popularized by developer Omega Force and its Dynasty Warriors series.

Three Hopes is set before and during the events of 2019's Fire Emblem: Three Houses. As in Three Houses, you play a mercenary, this time by the name of Shez, who happens to have the same kinds of dark magic abilities that the main villains of Three Houses had. (It's probably just a coincidence, though.) Shez fights alongside one of the three houses of the player's choosing in the fantasy land of Fódlan. The three houses are pitted against each other in an exhausting war fought with magic, melee weapons and shape-shifting abilities. Just like in the original game, Shez needs to earn the trust of their peers and level up their bonds by completing chores together, cooking delicious food, training countless hours and teaming up in battle.

How exactly Shez and Three Hopes fit into the grander lore of Three Houses is a confusing mystery that only gets somewhat clearer the more hours you sink into the game. Shez often faces off against the protagonist of Three Houses, Byleth — now referred to as "Empress" or "the Ashen Demon" — who always aides an enemy house. Three Hopes never fails to remind players of the tolls of the game’s war. (Nintendo)

The game clocks in at roughly 40 hours for one playthrough, but can easily span the course of 100 hours for completionists looking to experience each storyline and max out relationships. I started my journey about three weeks ago with Dimitri's Blue Lions army, who look just as emo as they did in the original Three Houses, and had enough time to finish up most of Edelgard's Black Eagles storyline. (I saved Claude and the Golden Deer for last, as I spent more than 140 hours with them in the original game and figured I knew that storyline the best.)

At times, playing Three Hopes is similar to playing chess. You order around soldier units on the battlefield, telling them to seize the advantage and defend weak points. Once arriving at their destinations, where the player takes the reins to fight alongside other characters, these units can send dozens of enemies flying into the sky in what are often absurd-looking animations, common in the Musou genre. My personal favorite is fighting as the Death Knight, Jeritza, who will tell his enemies in a booming voice, "Stand, coward. Your life is forfeit." It's also clear that Shez and the leaders of the three houses have the best combat design and most satisfying skills to spam. Dimitri's attacks send him jumping into the air constantly, allowing him to dodge most landlocked enemies.

The game's many, many battles are interspersed with the same heartwarming character stories that made Fire Emblem: Three Houses so compelling, and helped spawn a plethora of fan art and fan fiction. For the past few years, I had heard so much about the Blue Lions' sad boy, Dimitri Alexandre Blaiddyd, that I was excited to see what he was up to in Three Hopes. Spoiler alert: He's just as forlorn and despondent as ever. The characters' stories are kept consistent with the original game, which makes it feel like revisiting old friends. Dimitri and Dedue's bromance was as moving as ever. And only by ordering Petra and Caspar in the Black Eagles army to clean horse stalls together did they level up their bond to a point where Petra reveals she wanted Caspar's father dead.

Three Hopes leans into this weird contrast between focusing on armies of cherished characters where anyone can die, and idyllic scenes where you can help Felix apply first aid or hear Dorothea sing operatically. It kind of works, as scenes where characters spend their downtime are even more precious and heart-rending when the brevity of their lives is underscored by the war raged across Fódlan.

The game never fails to remind you of the tolls of this war. Even if you play Edelgard's house, easily the most warmongering of the three, she still eventually admits that her cause has cost too many lives and she's made mistakes. As the player, you can help her make fewer mistakes, choosing to recruit allies instead of killing them. Sometimes that means waiting around in battle instead of immediately destroying all enemies, and then slowly enacting strategies to force the opponent to surrender. It's an intriguing idea in a genre that is mostly about killing — why not stop, and add another friend to the roster instead? 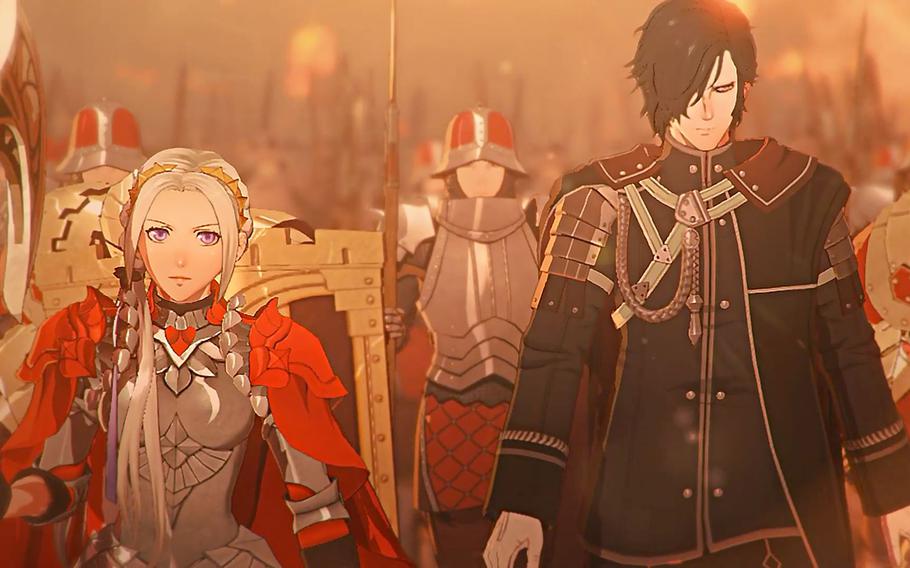 Often, a new ally is added so late into the game that you'd have to go out of your way to level up their bonds with other characters. But since all the characters' levels and powers get carried over to future playthroughs, you can start back up where you left off on another playthrough. That can make for amusing situations. I recruited the Blue Lions' Ashe to the Black Eagles on my second run, and he was hilariously level 49 among other level two peasants on the team.

While writing this review, I had the Fire Emblem Warriors: Three Hopes soundtrack playing on repeat. The rock-orchestral choir music is the perfect pairing with the game's repetitive combat, where each enemy is downed by mashing Y-Y-Y-Y, X-X-X or, occasionally, the A button. The developers included multiple versions of songs, such as a vocal track with additional guitar and drums, and a pared-down rendition for when the battle is paused and you're sending orders to units across a map. The soundtrack makes you feel like you're in the opening song of an anime, and it's the motivation I needed to power through all these chapters of the game.

Because, again, this is a long, repetitive game. Thankfully, it gets easier and more satisfying the more hours that you've invested, and some storylines are more interesting than others. A lot of the dialogue in the Blue Lions route felt predictable and unimportant. But siding with the Black Eagles house, which the other houses revile, means getting more behind-the-scenes access to world domination plans and plotting against traitors.

Some of the combat is clearly more suited to the Musou genre, too. Classes with swords, lances and axes feel hefty and impactful when you're spamming their skills; those with mages, archers and thieves, less so. Petra and Felix, whom I trained into the trickster class, spring onto enemies so quickly it was easy to lose track of them, making it harder to aim. Fighting taller enemies, such as in rare encounters with golems and giant wolves, feels more meaningful and fun than facing the average band of soldiers does. And flying on dragons — also possible — is an unwieldy experience that could've been improved.

When you're not fighting or talking, the game has a lot of busywork for you — upgrading facilities with resources, upgrading units with better gear, sending allies to clean the campgrounds — in addition to many side missions and side quests, which are optional but grant such a significant power boost that you might as well do them. Unfortunately, Three Hopes has fewer perks that made such busywork fun in the original game. There's no fishing; fish just magically appear in your inventory. There's no growing of herbs. There's no marriage or romantic endings, though you can ask characters out on dates and they may even flirt. And the setting of constantly being on a battleground can be draining, compared to the beautiful and cozy backdrop of Garreg Mach Monastery in the original game.

There are a few features I wish could be added to the game, which would make it slightly less tedious. I'd love to be able to check what resources I need to upgrade facilities directly from the Supply Master non-playable character, rather than having to double back each time, but a guide could take care of that. The game has no indicator for which side missions you've completed and which ones you have yet to.

For what the game is — a sequel to Three Houses with real-time Musou combat — it delivers what it promised. There's a mystery to Three Hopes that can only be unraveled with dozens of hours of combat and cutscenes, and the game assumes substantial preexisting knowledge of Three Houses. Fans will enjoy reuniting with their favorite characters, but the derivative plot and built-in grind make it a tougher sell to anyone else.