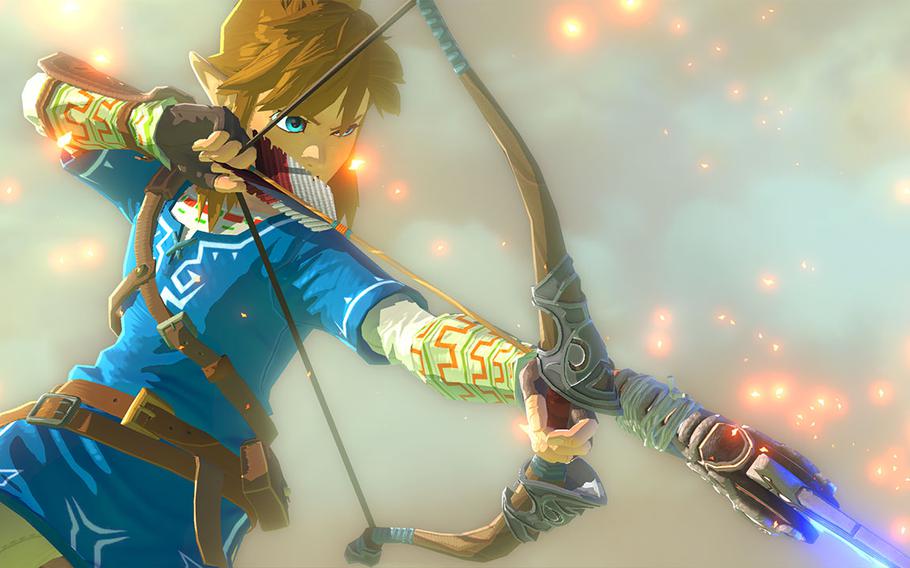 Very few of the "Legend of Zelda" games are anything but great, and almost all of them end up as the best games released that year. The Wii U version will probably continue that legacy this year. (Courtesy photo)

Last year’s E3 Electronic Entertainment Expo was largely derided for its emphasis on games that would never see the light of day in 2014. Fans were upset that most of the great-looking games were scheduled for the distant future of 2015. This was bad news for us then, but it also provided an excellent glimpse into what to expect out of gaming this year.

Ladies and gentlemen, the future is looking bright.

The Xbox One and PlayStation 4 are entering the second full year of their lifespan — historically the year when consoles really hit their stride.

Wii U owners have a new “Zelda” to look forward to, and PC gaming is looking stronger and more diverse than ever before.

Here are some of the games set to be released in 2015 that we’re most excited about.

‘The Legend of Zelda’

Unless you’ve just started playing video games 10 minutes ago, you’re at least somewhat familiar with the “Zelda” legacy. In more than 20 years, the series has evolved from the prototypical adventure game to a genuine cultural touchstone. There are a lot of reasons for that, but No. 1 is the quality of the games themselves. Very few of the “Zelda” games are anything but great (the disastrous CD-i abominations notwithstanding), and almost all of them end up as the best games released that year.

“Zelda” for the Wii U is shaping up to be another worthy entry in the venerable franchise. The game is still in the early stages of development but, from what we’ve seen so far, the focus on a more open-ended world looks to shake things up a bit. If creator Eiji Aonuma can pull off his vision, we could end up with a game that combines the best of “Zelda” with the best of open-world games like “Skyrim.”

This role-playing action game springs from the mind of “Dark Souls” creator Hidetaka Miyazaki. Fans of that series, or its predecessor “Demon’s Souls,” likely already have this PlayStation 4 exclusive on their radar. For those unfamiliar with either series, this could be an excellent entry point into what looks to be a brutally challenging adventure in keeping with the legacy of Miyazaki’s past creations.

“Bloodborne” drops the medieval influence of the “Souls” series for a more gothic Victorian atmosphere. You’ll still be fighting the undead, monsters and massively oversized creatures, but now you’ll be doing with it with bullets, as well as swords and axes.

Gone too is the plodding, defensive pace of “Souls,” replaced with a much more twitch-based combat system that rewards offense as much as defense. And if the videos Sony has released are anything to go from, the infamous challenge of the “Souls” series remains very much intact.

Tom Clancy’s video games are more or less a genre unto themselves. Even though the author is unfortunately no longer with us, the legacy he built with Red Storm Entertainment remains strong. “The Division,” developed by Red Storm and Ubisoft Massive, is the latest realistic military shooter bearing his name. It also is looking like one of the best since 2001’s “Ghost Recon.”

“The Division” is set in New York City after a plaque wipes out swaths of the population. The ensuing chaos causes the activation of an elite unit of military operatives who are tasked with preserving what remains of society. It sounds like the perfect plot for a great action game, and the videos we’ve seen show it’s looking promising. It’s also an online, co-op game that places a premium on social interaction and exploration. There looks to be plenty of PVP action, but it looks like the bulk of the game centers on cooperation and teamwork rather than kill-death ratios.

Despite the failings of last year’s “The Master Chief Collection,” it’s hard to not be a little excited for a new, proper “Halo” game.

Little remains known about the single-player campaign, but the multiplayer beta is ongoing as we speak, and early impressions are very positive.

The new additions to the tried-and-true formula, like jet packs and powerslides are adding new dimensions, while 343 Industries continues to listen to fan feedback to tweak the overall experience.

One immediate example of this is how they listened to feedback on the sprint mechanic, which is now tied into shield regeneration.

Regardless of how you feel about that particular feature, it’s promising that they’re actively listening to their player base to balance the game out, and for that they get a spot on our most anticipated games of 2015.

This spacefaring adventure game from Hello Games is difficult to fully explain to the uninitiated. In “No Man’s Sky,” players are given a spaceship and set free in a massive universe. What they decide to do from that point on is entirely up to them.

The big draw of “No Man’s Sky” is that unlike every other space exploration game to date, each of the planets is reachable through a seamless transition from the outer atmosphere to the planet’s surface. No loading screens, no cutscenes showing a shuttle launch. You just fly there. Once on a planet’s surface, players can scan local flora and fauna, each procedurally generated to give each planet its own set of unique attributes. You might be on an ice planet with roving bands of giant orange dinosaurs, or a lush garden world full of hostile enemies.

While there is supposedly an overarching plot of reaching the center of the galaxy, expect the bulk of the “No Man’s Sky” experience to be player-driven and not bound to a series of follow-the-glowing-dot-on-the-minimap missions.

If Hello Games pulls this off, they’re going to revolutionize the concept of sandbox gaming.

It’s pretty telling that the prologue chapter to “Phantom Pain” ended up in many of 2014’s game of the year lists, even though “Ground Zeroes” was basically a glorified demo. In that demo, we got a glimpse of the enormity of “Phantom Pain’s” world and a reaffirmation that Metal Gear’s creator Hideo Kojima remains gloriously off center. “Phantom Pain” is ostensibly an action-stealth game centered on Big Boss’ adventures in a war-torn landscape. “Metal Gear” games are never quite that simple though, and this installment is no different.

Big Boss will add mountain climbing and horseback riding to his repertoire, and the base-building and soldier recruitment from the underrated “Peace Walker.” He’ll also have to manage relationships with AI companions, of which only two — the troubled soldier Quiet and a wolf companion — have been revealed. The most recent gameplay trailer shows that the zaniness of past “Metal Gear” games has not been minimized whatsoever. For instance, this is likely the first military action-stealth game that features goat herding and eliminating enemy vehicles with balloons.

CD Projekt Red’s magnum opus may be the most ambitious role-playing game coming out this year. The final game in the Geralt trilogy is being billed as an open-world game where nearly every action has a consequence. The previous games remain the hallmark of the choice-and-consequence game philosophy, so there is little reason to doubt this one will be any different. “The Witcher 3” is also looking like one of the most visually detailed games coming out this year, which is impressive considering CD Projekt is aiming for a world size that dwarfs the competition. For the first time in the series, players will also be able to play as a second character, in this instance a sorceress by the name of Ciri. All in all, this is looking like the roleplaying game to beat in 2015.

This continuation of the excellent “Batman: Arkham” games was supposed to hit shelves last year, but Rocksteady Studios pushed it back to polish up some of the rough spots. Last year’s loss is this year’s gain. This sequel’s main draw, besides the continuation of the best Batman video game series ever made, is the addition of the Batmobile as a playable element. For the first time in the Arkham series, players will be able to jump behind the wheel of Batman’s famed car to explore the greatly expanded series and to solve puzzles. The most recent series of trailers shows a tweaked combat system that shows Batman in his prime, easily taking out chumps left and right, and a story that ties in directly to the events of “Arkham City.”

The cutest game in the pipeline for 2015 is Nintendo’s next platformer starring everyone’s favorite dinosaur. “Yoshi’s Woolly World” is a high-def take on the same visual style shown in 2010’s “Kirby’s Epic Yarn.” Yoshi will be pulling apart enemies and weaving levels back together with the flick of a tongue or the toss of an egg.

Anyone impressed by previous fabric-based art styles will be blown away by the depth-of-field tricks and texturing in this game, which even in early previews looks astounding. The game sports a co-op mode, especially fun in this kind of remake-the-world type of environment. Players will use one another as egg ammo, working together to find hidden gems. This Nintendo title might just steal the cute crown back from Sony’s “LittleBigPlanet.”

It’s not too often that we see truly unique shooters come down the pipeline, even less frequent are shooters of any kind published by Nintendo. This colorful, cheerful entry is looking like both. Rather than grizzled war veterans shooting off one-liners as often as bullets, “Splatoon” puts players in the tentacle-clad boots of squid people spouting colored ink across twisty, turning maps.

Teams of squid people are pitted against each other as they each race to cover the map with their team’s colors before the round ends. The team with the most coverage wins. The ink also doubles as a mode of transportation, as players can use their team’s colors to “swim” through the ground, create bridges to higher points and slide up walls.

The recently announced single-player mode looks like a fun mashup of the multiplayer concept and the “Ratchet & Clank” series.

Everything we’ve seen so far is showing that “Splatoon” is going to be a great kid-friendly game to pick up when it releases later this year.

This is the first of the major games to be scheduled for release this year, and also one of the most anticipated and most contentious. Early videos showed this steampunk shooter to have some amazing visuals, but gameplay details were sparse. Here we are, just weeks away from release, and those details still remain vague.

The most recent set of videos show an abundance of cover-based shooting and quick-time events — both mechanics we’re bored with — but it also shows an interesting setting and a unique atmosphere. We’re a bit wary of “The Order: 1886,” but we’ve seen enough that we’re bursting with excitement nonetheless.

There are many other games that could have made this list, including “Uncharted 4,” “Cuphead,” “Rise of the Tomb Raider” and “Crackdown.” That fact is even more reason to be excited for gaming in 2015. Some years the prospects look a little anemic, but this year is positively bursting with potential. Let us know if we’ve overlooked anything major, but until then, happy gaming!

Stars and Stripes' Sam Laney contributed to this report.