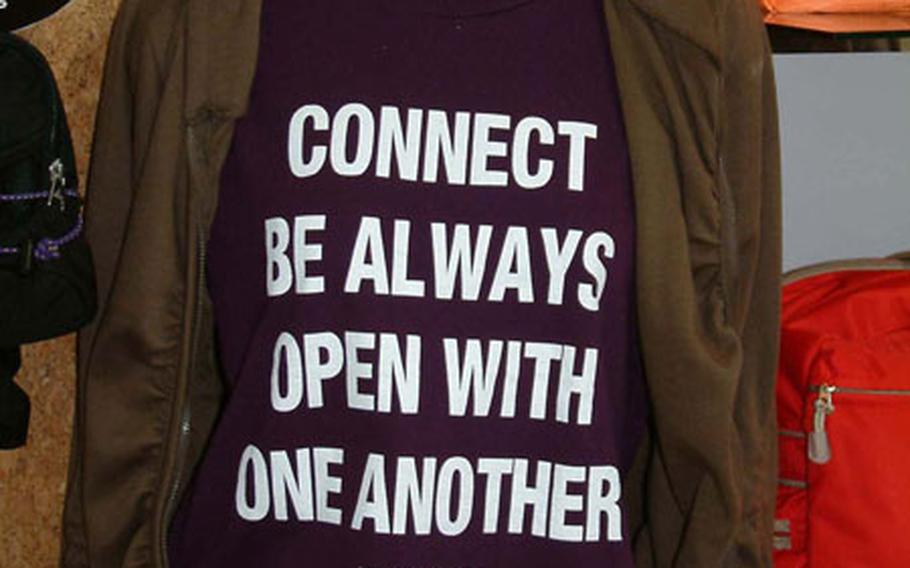 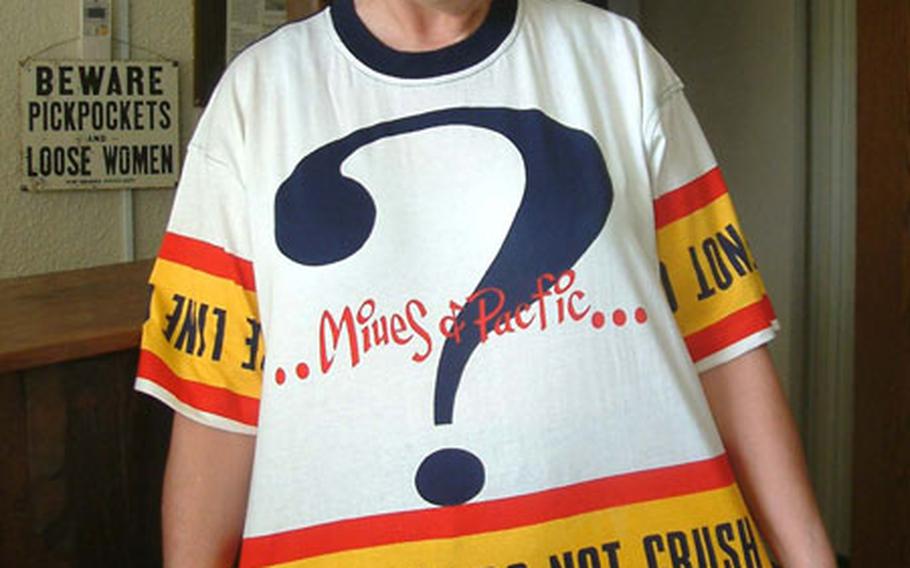 Ruth Ellen likes the simple zen message in this shirt. When the press hordes rush to the crime scene, please don&#39;t crush the police. And we don&#39;t know what a "Mieus of the Pacific" is, but she wants to be one. (David Allen / S&S)

KITANAKAGUSUKU, Okinawa &#8212; When it rains and the beaches aren&#8217;t options for an outing, I know a place that always promises a good time.

Well, it&#8217;s actually many places. My favorite bad weather haunts are the racks of T-shirts in any Japanese department store. When my wife, Ruth Ellen, and I shop, I make sure we have a pen and notebook in hand. You never know when you&#8217;re going to come across another great Zen T-shirt.

Zen T-shirts? No, I&#8217;m not talking about some yellow billowy thing like a Buddhist monk&#8217;s robe, or some silk-screened image of the Buddha, perhaps a replica of the great statue at Kamakura.

What I&#8217;m talking about are the shirts found while stalking the aisles of the giant Jusco and San-A department stores and the smaller clothing outlets. There are days when we become lost in hours of searching for the perfect warped sentiment in what some critics of Japanized English call &#8220;Japlish.&#8221;

The racks are filled with shirts printed with almost incomprehensible sayings. For instance, we once found a white T-shirt that bore the following phrase in huge block letters:

Anyone wearing such a shirt probably is a bit funky and English-challenged.

You can&#8217;t spend a day in Japan without noticing someone walking around in a T-shirt emblazoned with a saying you can bet your life the wearer didn&#8217;t understand. We&#8217;ve all laughed at the mistakes in spelling and context. They are amusing at first, then confounding. Why do the T-shirt makers persist in printing such stupid mistakes in a language everyone in Japanese schools spends years learning? Can&#8217;t they afford translators to convey the sentiments in recognizable English?

After failing to impress upon his students the importance of proper English, Grundy moved to Shanghai to teach in a private school for the children of capitalists taking advantage of China&#8217;s emergence as a Pacific economic powerhouse.

Ever since Japan opened its doors to the world after the Meiji era, Western culture, especially the English language, has been considered fashionable, said Masayasu Miyagi, a social anthropologist at the University of the Ryukyus.

But I don&#8217;t know about the Japanese not caring. My wife, who enjoys the T-shirt safaris as much as I, believes something else is at work here. The authors of the fractured English, she believes, know what they are doing.

When you throw logic and rational thought out the window, these T-shirts, like the black shirt we found in the old Hypermart one day, make more sense. It read:

&#8220;Every day is a good day,&#8221; said the Zen master Yunmen. Every day we hunt for these T-shirt treasures, we learn. We approach enlightenment. It is a good day.

You never know when a T-shirt slogan will bowl you over. At a Fashion House in Yomitan we stumbled upon a shirt that admonished:

And a white tee shirt in a San-A store in Chatan spoke of the transient quality of love:

Many of the shirts suggest living life large, but in harmony with nature. One shirt advised:

And just when you think you have it all figured out, a Zen shirt tells you:

We wonder. But then, the next shirt advises:

Still, the one Zen T-shirt that spoke to me the most was the simple black tee embossed with just two words: