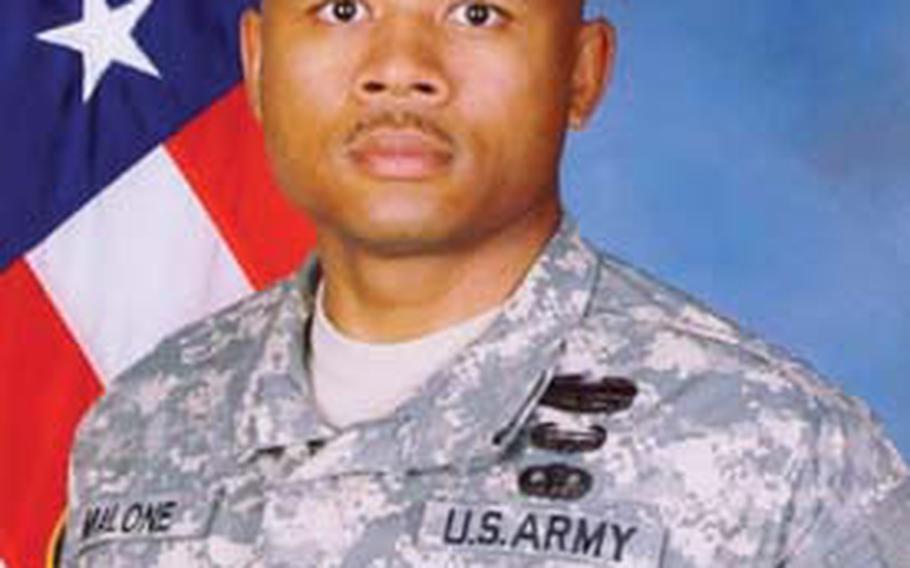 When Sgt. 1st Class Ed Malone got the order to retreat, he refused.

Already two hours into a firefight with insurgents, Malone worried that pulling his platoon out of their positions would effectively surrender that section of the city. He knew about 100 more enemy fighters were minutes away, but so were U.S. reinforcements.

So he called for more back-up, rallied his soldiers and started another assault.

Malone, now a 14-year veteran of the Army, was on his second tour in Iraq in 2005 when that firefight took place. On June 25, his men from the 3rd Armored Cavalry Regiment were assigned to meet up with Iraqi security forces and run a "meet and greet" patrol in Tal Afar, Malone said.

But the soldiers met up with their inexperienced Iraqi counterparts and headed into the city.

"Within 10 minutes of the patrol arriving, the streets started to empty," he said. "Within 15 minutes, the first shots rang out."

The first barrage came from an unexpected angle. One of Malone&#8217;s men was shot in the leg, but the bullet ricocheted up into his spine and temporarily paralyzed him.

Malone ordered his men to return fire. As one soldier ran to his position, he dropped a grenade launcher in the middle of the street. Without thinking, Malone ran out into the gunfire and grabbed it.

"Everybody thought I was crazy," he said.

They killed a rooftop shooter and began taking defensive positions on top of the nearby buildings. Malone ran to a nearby courtyard and found a critically wounded insurgent, and began performing first aid to save his life. His men reported more attackers entering the area.

"We heard a large group of men on the other side of one wall, chanting, getting themselves psyched up for an attack," he said. "We lobbed a few grenades over the wall, and it was complete silence after that."

Snipers took out several others and relayed movements to Malone&#8217;s unit. One grenade hit a nearby fuel tank, creating "a huge, Hollywood-style explosion." A group of 10 women and children rushed toward the Bradleys, looking for protection from stray bullets and shrapnel.

Malone ordered those civilians into the courtyard, with the wounded prisoner and some of his men. When the order came for his men to pull out, the platoon leader argued that they had the situation under control.

The platoon continued to press ahead, clearing out nearby alleys and intersections. Malone ordered a few of the men to help him load the wounded insurgent into one of the vehicles, but the group came under fire as soon as they stepped out of the courtyard.

"He got dropped in the middle of the intersection as we dove for cover," Malone said. "We were trying to get back to him, but then my guys realized he was pointing out our positions to the shooters. The fire was so intense we couldn&#8217;t get out to get him."

As Malone planned their next move, a bullet fragment ripped through his left foot, taking him out of the fight. His men pushed him into a Bradley and evacuated him as reinforcements arrived.

"I was focused on taking care of my guys, but I felt pretty proud that I was able to keep a level head through the whole thing."

Army officials awarded him the Bronze Star with "V" device, saying his "tactical prowess and aggression" helped keep his soldiers alive and on target. Only Malone and one other soldier were wounded in the fight.

The wounded insurgent lived, too; his comrades took him to a nearby hospital.

A few months later, Malone found out the man had become an informant for U.S. forces, giving them important information on weapons caches and insurgent plans.

"I guess he figured we risked our lives to try and save him," he said.