The location of the new Dunkin' Donuts in K in Lautern is its biggest drawback. Situated on the bottom floor of a four-level shopping mall, the restaurant is not easily accessible for quick-service meals. (Gregory Broome/Stars and Stripe)

The location of the new Dunkin' Donuts in K in Lautern is its biggest drawback. Situated on the bottom floor of a four-level shopping mall, the restaurant is not easily accessible for quick-service meals. (Gregory Broome/Stars and Stripe) 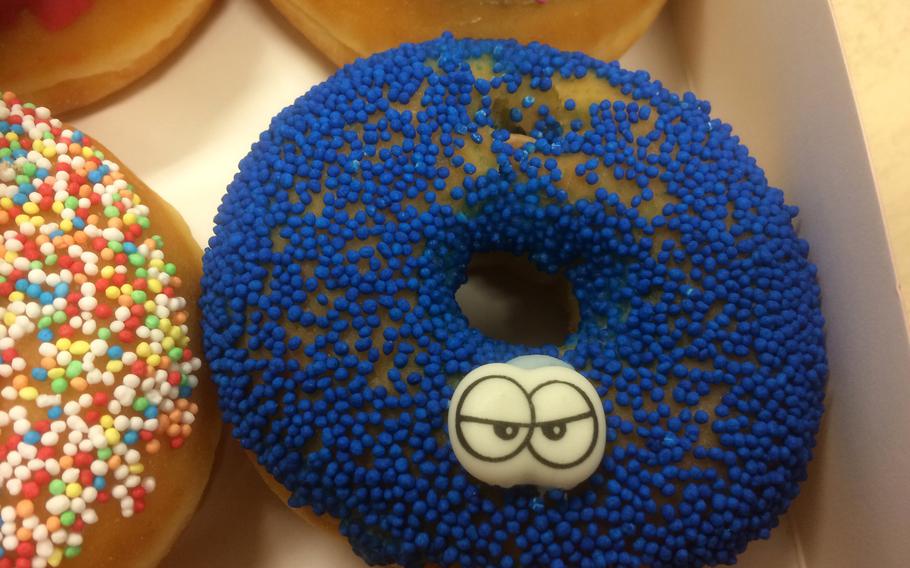 "Mr. Cookie" is one of many colorful, tasty doughnuts offerd by the new Dunkin' Donuts location in Kaiserslautern, Germany. (Gregory Broome/Stars and Stripe) A box of a dozen colorful doughnuts from the new Dunkin' Donuts location in Kaiserslautern, Germany. (Gregory Broome/Stars and Stripes)

America runs on Dunkin’. That’s the tagline the coffee and doughnuts chain Dunkin’ Donuts has used to summarize its ubiquitous presence and popularity in the United States.

Now Germany is starting to break into a brisk walk on Dunkin’.

There are 60 Dunkin’ Donuts locations in the country, according to the company’s German website, and mostly are clustered in major cities such as Berlin, Frankfurt and Stuttgart. Now, however, there are two Dunkin’ locations to run to in the decidedly nonmetropolitan region of Kaiserslautern.

A Dunkin’ outpost opened in the Kaiserslautern Military Community Center at Ramstein Air Base — and therefore it’s not included on the company’s list of German locations — in the summer of 2016. In the fall of 2017, Dunkin’ debuted a shop in K in Lautern, the enormous shopping mall that opened in downtown Kaiserslautern two years earlier.

The new K in Lautern location delivers on what makes Dunkin’ a stateside fixture — predictability. It offers a solid array of coffees, a case full of colorful, attractive doughnuts and a few other breakfast foods. On my visit, the cases were full, the coffee was hot and the service was quick and friendly.

But the outpost disappoints in one important way: location.

A key feature of the stateside Dunkin’ experience is convenience. One can stop in or drive through on a commute or errand and proceed with coffee and doughnut happily in that hand. It’s why the restaurant has become a part of so many Americans’ morning routines, particularly in the northeast.

The K in Lautern shop isn’t so accessible. It’s on the underground floor of a four-level shopping mall, surrounded by various competing eateries that detract from its ambience. There’s no stopping in for a grab-and-go here — a visitor must park in the mall’s rooftop structure or a nearby garage, walk from the bus stop across the street or wander in from the adjacent pedestrian zone, then navigate elevators or escalators to the basement level.

This makes a trip to Dunkin’ Donuts more difficult than I’d like. But I realize It’s unfair to expect Germany to re-create every typically American experience, even when it involves a classic American restaurant. I’m just happy there’s another Dunkin’ within running distance.