Dressed to thrill: Clothes are important at weddings in Japan 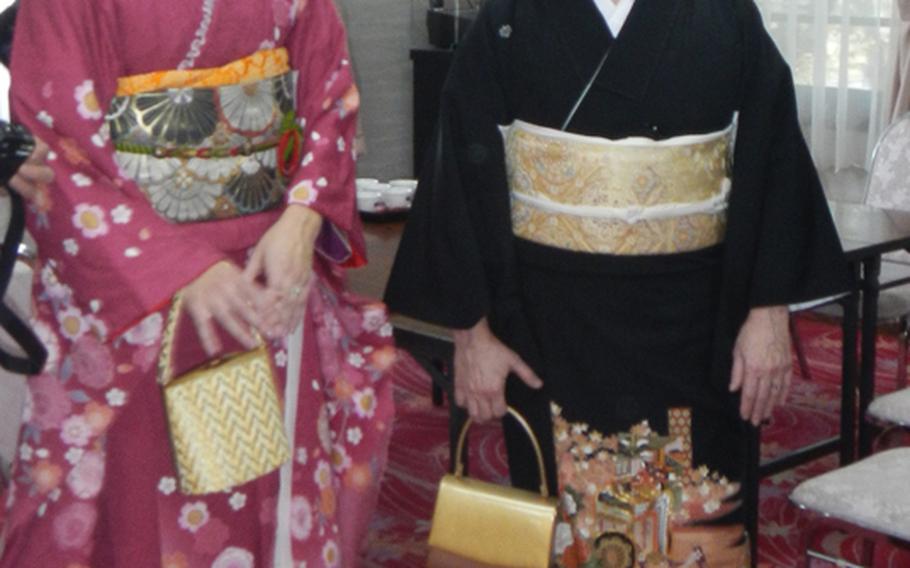 The author and mother of the groom, above right and her daughter at her left wore traditional garb for the wedding. (Courtesy Kate Moloney/Stars and Stripes) 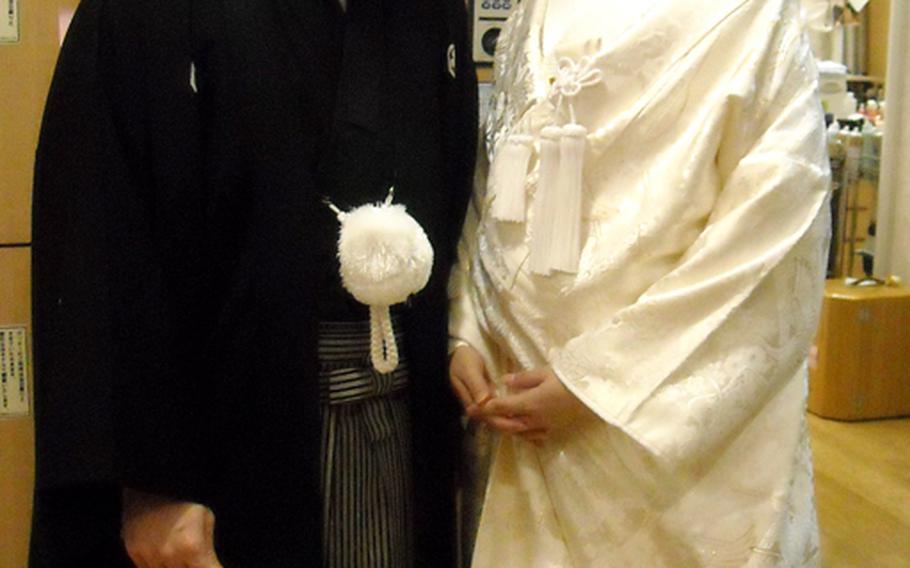 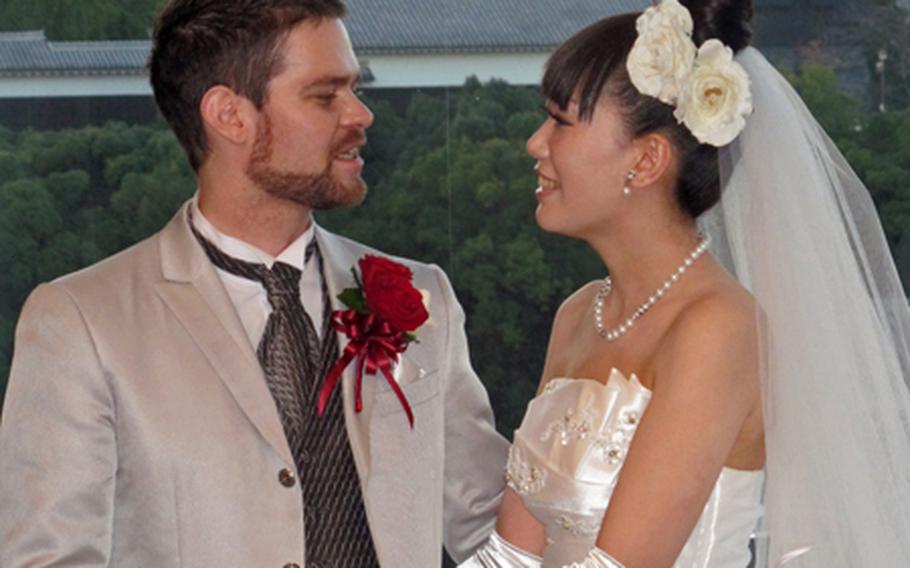 For the cutting of the cake, the bride and groom appeared in American wedding finery. (Courtesy Kate Moloney/Stars and Stripes) This is a copy of the invitation — printed in both Japanese and English. (Courtesy Kate Moloney/Stars and Stripes) 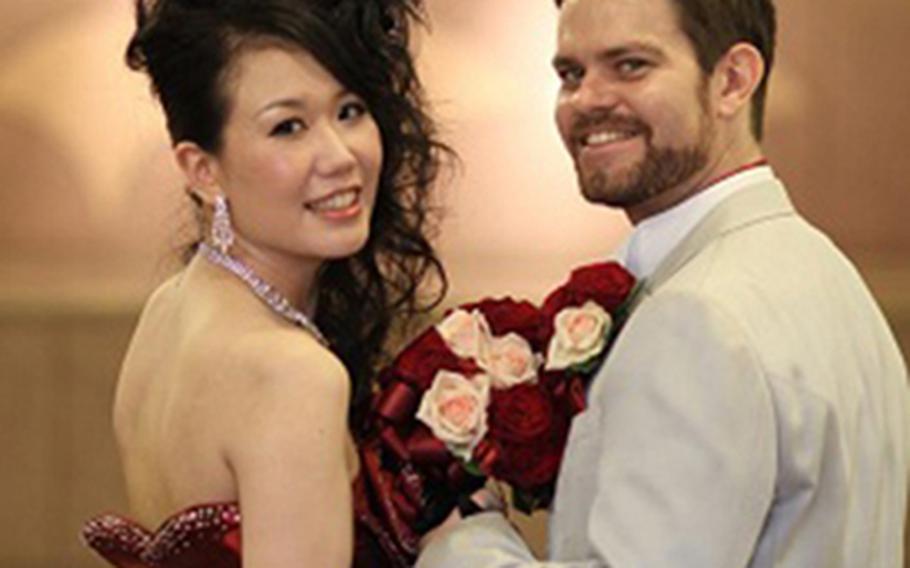 Tomoko and Mike wore two different outfits at the reception. Here, she wore a red cocktail gown while Mike went casual with a red cravat. All of their clothing was rented from Hotel Castle Kumamoto in Japan. (Courtesy Kate Moloney)

When my son, Mike, who lives in Japan, announced he was getting married to his Japanese girlfriend, Tomoko, my first question for him was: Will you dress up like a Samurai for the wedding?

Yes, he said, as his fianc&eacute; wanted a traditional Japanese ceremony.

Take traditional with a grain of salt. A Japanese wedding ceremony these days weds kimonos and American wedding gowns with formal gowns and morning coats &mdash; a mixture not unlike the country itself.

Weddings are a big business in Japan, Mike explained.

Tomoko and Mike decided to have their wedding in Kumamoto, a city in southern Japan famed for its beautiful cherry blossoms and its castle. They set a date for November and quickly selected Hotel Castle Kumamoto in Kumomoto, Japan.

Unlike in the U.S. where the bride buys her wedding finery, in Japan she rents it, usually from the hotel where the reception will be held. Tomoko and Mike tested out wedding clothes in advance. &ldquo;Tomoko tried on about five dresses: two wedding dresses and three (four?) cocktail dresses,&rdquo; Mike posted on a wedding blog. They also had pictures taken so they could see how they would look. They also sampled food and drinks &mdash; an all day affair.

The wedding itself was to be a Shinto ceremony in Kato Temple on the grounds of Kumamoto Castle. All the arrangements were set, the plane tickets were bought, the family and friends gathered in Kumamoto.

When I originally pictured myself at the wedding, I was wearing a brightly colored kimono. After a few days of that fantasy, I trashed it, admitting I did not know how to obtain, dress or walk in a kimono. I pictured Tomoko&rsquo;s female relatives whispering behind their fans about the foolish gai-jin, tripping over her footwear. And then Mike told me Tomoko&rsquo;s mother said I was to wear a kimono. Good news! Back came the colorful fantasy, but only for my daughter Rebecca, who would wear Tomoko&rsquo;s red kimono, and my 17-month-old granddaughter, who would wear Tomoko&rsquo;s kimono from when she was a toddler.

I would be wearing black.

My kimono, called a kuro-tomesode, was indeed black but with a very colorful pattern of a cart on the bottom third. It took two women from the wedding center at least 15 minutes to get me in the outfit. According to a web site about Japanese weddings, the kuro-tomesode is the most formal kimono for a married woman and is often worn by the mothers of the bride and groom. Yes, Tomoko&rsquo;s mother wore one, too. Mike&rsquo;s father wore a morning coat.

The shrine and ceremony were both fascinating. I tried to remember all that I had seen, but had to resort to a Web search to understand it. According to the BBC&rsquo;s website, the current Shinto wedding ritual is based on the marriage of Crown Prince Yoshihito to Princess Sado in 1900. It includes a ritual purfication, then prayers for the couple, and the groom then reads words of commitment. Wedding rings can also be exhanged.

After the ceremony, formal pictures were taken and then we moved on to the reception. I changed into my American mother-of-the-groom outfit, and arrived at the reception shortly before Mike and Tomoko made their grand entrance &mdash; also wearing American-style wedding clothes. Mike appeared first, wearing a gray tuxedo and carrying his niece, Zoe, wearing a red dress that matched the huge flower in his buttonhole. Tomoko, with her father, wore a white dress with her hair down, and walked the room filled with 80 guests that included both Mike&rsquo;s and Tomoko&rsquo;s bosses and co-workers, making sure everyone got a good view of the bride. Tomoko was then handed over to Mike and the festivities got underway.

A Japanese friend told me traditional receptions were made up of eating, drinking and listening to never-ending, boring speeches. She pantomimed falling asleep. Since my knowledge of Japanese is limited mainly to the weather and eating, I was prepared for the worst. But Mike had stationed at our table two co-workers &mdash; Gareth Jenkins, originally from Wales, and David Victor, originally from the U.S. When Mike&rsquo;s boss got up and gave a 10-minute speech, Gareth - bilingual - whispered a translation for me.

After another progress around the room, Mike and Tomoko came to the wedding cake, which was &ndash; surprise! &mdash; a real cake. Jenkins told me when he got married, the cake was six feet tall and made of plastic with a space cut out in the bottom where a chunk of cake was inserted so he and his wife could cut some cake. His wife wasn&rsquo;t with him at this wedding; most co-workers go unaccompanied to these events.

Mike and Tomoko cut the real thing and courteously fed each other a forkful. I urged Mike to kiss Tomoko during the cake-cutting; Tomoko gave in grudgingly &mdash; public displays of affection are not practiced in Japan. However, the picture that resulted is apparently being used in promotional material for the hotel.

Soon it was time for husband and wife to leave the reception for a second change of clothes. Tomoko&rsquo;s mother, Yayoi-san, led Tomoko away first, parading her through the room so everyone could get one last look. They bowed and Tomoko went off. Then it was time for the groom&rsquo;s exit. To the strains of one of my favorite Beatles songs &ldquo;In My Life&rdquo; Mike and I wove our way through the room, stopping for flashing cameras and comments tossed out in Japanese. Then we bowed, and Mike was gone.

It was time for serious eating and drinking. Twice my meal was interrupted by Tomoko&rsquo;s relatives who wanted to be introduced and offer me a drink &mdash; beer. I&rsquo;m not a beer drinker, but I grasped this was important for the Japanese, so I happily accepted the beer and drank to the couple&rsquo;s happiness.

After a while the room buzzed in anticipation: the bride and groom were about to reappear. All eyes turned to where they had left, but we were all delightfully surprised when they came through the door at the other end of the room. This time Tomoko was dressed in a stunning red evening gown &mdash; like her previous wedding apparel rented from the hotel &mdash; and Mike was more casual with a red cravat that matched not only Tomoko&rsquo;s dress but his flower. They made a tour of the room, stopping for photos and visiting with their guests, to the music of Cake &mdash; &ldquo;Short Skirt, Long Jacket,&rdquo;

Note there was no band, only recorded music played during walks around the room, and no dancing &mdash; but plenty of drinking, speeches and time to visit with other guests.

As the reception neared its end, the parents of the bride and groom were called to center stage where we stood while the bride and groom read letters to us. Tomoko&rsquo;s was a very emotional one with her in tears at its end. Mike&rsquo;s was more to the point and when I asked him why he wasn&rsquo;t crying while he read it, he pointed out Tomoko was still crying during his, so that counted. Then they presented us with gifts: ties for the fathers and earrings for the mothers. There were bows all around, parents to children, children to parents, all to the guests.

Mike later told me this was very difficult for him as Japanese do not boast of their or their children&rsquo;s accomplishments. They&rsquo;re always disparaging. So given this, Mike found it doubly hard as he then had to translate into Japanese his father&rsquo;s words to the family and friends gathered.

We took part in a receiving line, thanking the guests for coming and bidding them farewell.

Mike had been teaching me some handy Japanese phrases to say. One was tanoshii, meaning fun. To many of the guests I said, &ldquo;Tanoshii desu neh?&rdquo; which I hoped meant &ldquo;Fun, wasn&rsquo;t it?&rdquo; because it had been.

But the fun wasn&rsquo;t done yet. Mike and Tomoko changed their clothes again and took off to a reception for the friends and co-workers, particularly those not invited to the first reception. And, as I found out the next day, there was even a post, post-reception for the intrepid drinkers.