Donald R. "Ryan" McGlothlin ‘He did save us from that grenade’ 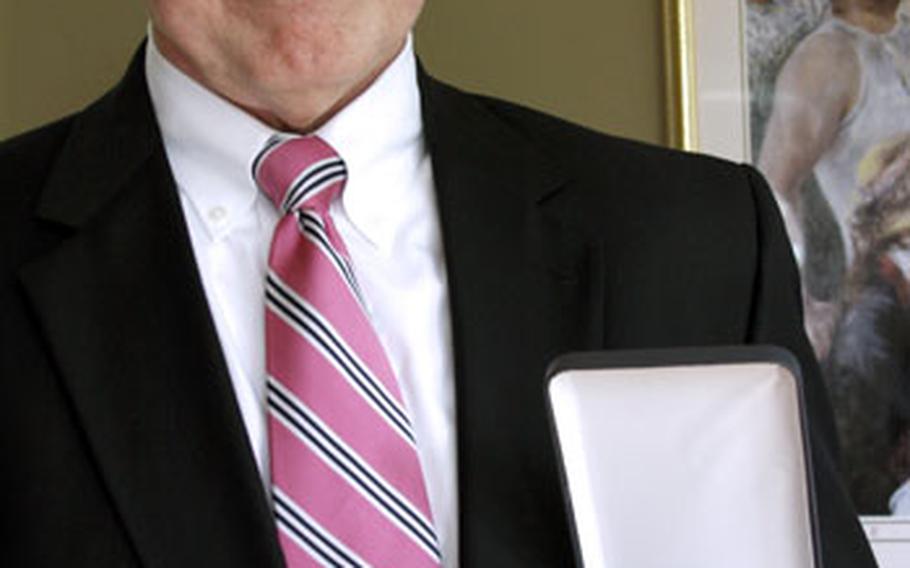 Don McGlothlin proudly displays his son&#39;s Silver Star medal, which was presented to the family in January. (Joe Gromelski / Stripes) 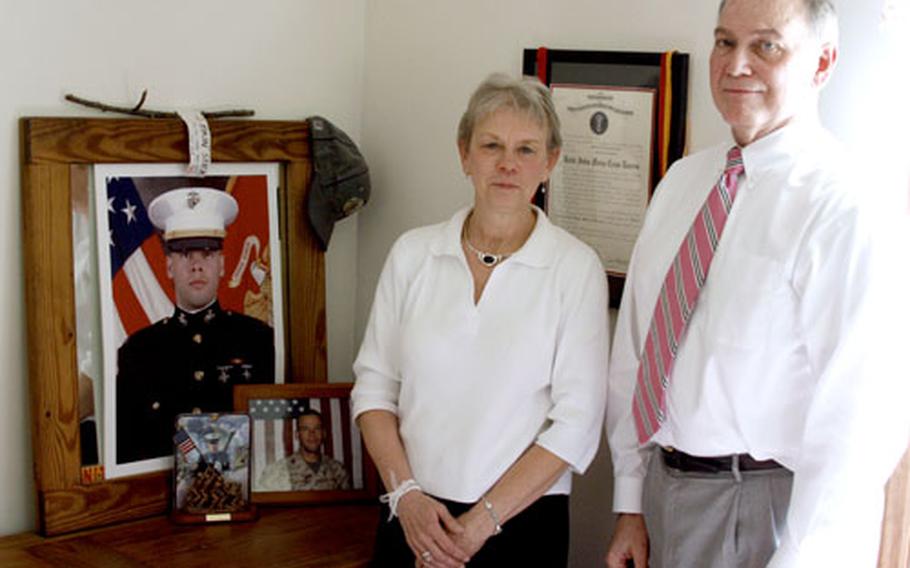 "When he became a Marine, that was it, that was what he wanted to do," says Ryan McGlothlin&#39;s mother, Ruth. (Photo courtesy of Ruth McGlothlin) Ryan McGlothlin was the valedictorian of the Class of 1997 at Lebanon High School in southwestern Virginia. (Photo courtesy of Ruth McGlothlin)

1st Lt. Ryan McGlothlin kept a notebook of favorite quotations, with this poem on page 1.

Don McGlothlin"He&#39;d drive himself to be the best he could, and he imparted that to his Marines." (0:42)

Don, Ruth and Sean McGlothlin1st Lt. Ryan McGlothlin&#39;s parents and older brother talk about his childhood and his achievements. (6:03)

Don McGlothlin has spent a lot of time talking about his son Ryan since he was killed in Iraq in 2005.

Not every parent is asked by the White House if the president can tell their son&#8217;s story.

"My son, I mean, he was born a warrior," said McGlothlin, a soft-spoken lawyer and Army veteran of Vietnam who now chuckles and sighs at the memories of Ryan&#8217;s life.

"He was extremely intelligent, graduated first in just about everything that he did," Don said proudly. And he always wanted to be a Marine.

On Tuesday morning, Sept. 11, 2001, Ryan was on his way to California to begin a Ph.D. in chemistry. When he heard about the attacks, furious, he called his dad.

"He was so angry, he had it in his mind that he was going to drive to the nearest Marine Corps recruiting station and sign up," McGlothlin said.

His father tried to talk him out of it, to look for other ways to serve the country. Ryan continued west, but left school for the Marines as soon as he could.

Again, he graduated at the top; this time from The Basic School with his choice of billets: flight school or infantry. Again, his dad tried to steer him out of harm&#8217;s way.

"From a father&#8217;s perspective, I thought that it would be less likely that he would be hurt," if Ryan chose flight school, McGlothlin said.

"And then with a twinkle in his eye," his father said, chuckling, Ryan told him, "Besides, Dad, nobody&#8217;s ever been commandant of the Marine Corps who hasn&#8217;t been an infantry officer."

In January, the battalion commander said that Ryan&#8217;s were the best trained Marines of the battalion, perhaps the entire regiment. But it didn&#8217;t matter on Nov. 16, 2005. The ambush came too quickly. Eleven wounded, five killed.

The Silver Star citation says that Ryan&#8217;s "valiant and selfless actions saved the lives of two Marines." But the guys who were there say there&#8217;s more to the story.

"We turn around, pass him up, and the last I hear is a couple of gunshots and loud muffled explosion," Mooi said. "I owe him a lot."

But because his back was to Ryan, who was then a second lieutenant, Mooi could not file an eyewitness after-action account.

"I know. I know in my heart and in my head that he did save us from that grenade," he said.

Mooi feels guilty Ryan, who was posthumously promoted to first lieutenant, didn&#8217;t also receive a Navy Cross, or even a Medal of Honor.

"Something that he deserved more than me, you know?" Mooi said.

In more than three years of funerals, memorials, and awards ceremonies, Ryan&#8217;s father has discovered a side of his son he never knew. Ryan was everyone&#8217;s best friend. He counseled older students. He protected his Marines.

Less than a month after Ryan was killed in action, President George W. Bush invoked Ryan&#8217;s story amid a series of political speeches designed to soften growing public opposition to the war.

Ryan twice had voted for Bush&#8217;s opponent. He hated that Afghanistan was ignored for Iraq. But he loved being a Marine, and believed America had to finish what it started. So his parents agreed.

"Ryan didn&#8217;t support me in the last election. But he supported our mission in Iraq," Bush said. The president noted that Ryan carried a poem called "Don&#8217;t Quit." But then Bush made a tenuous connection, adding: "In our fight to keep America free, we&#8217;ll never quit."

Later, McGlothlin told Rolling Stone that he felt Bush used Ryan&#8217;s story "to scotch up support for the war."

He searched online for Ryan&#8217;s name, but it made him feel like they just did not understand.

"A lot of people who get on the blogs are sincere and they talk a lot, but they don&#8217;t live it, you know? These youngsters who are in our military, they live it. Day in and day out."

"It&#8217;s kind of funny," he added, "the people who were extolling the virtues of going over to Iraq and fighting and dying were probably the least politically attuned to Ryan&#8217;s way of thinking. At one point he told me, he said, &#8216;Dad, I think I may be one of two or three Democrats in the Marine Corps,&#8217; " McGlothlin said laughing.

Reunions are like family, where McGlothlin finds common ground. He doesn&#8217;t want to leave them. One platoon mate decided to name his expected son Ryan. Foundations were started in his name.

According to McGlothlin, that&#8217;s what Ryan was all about.