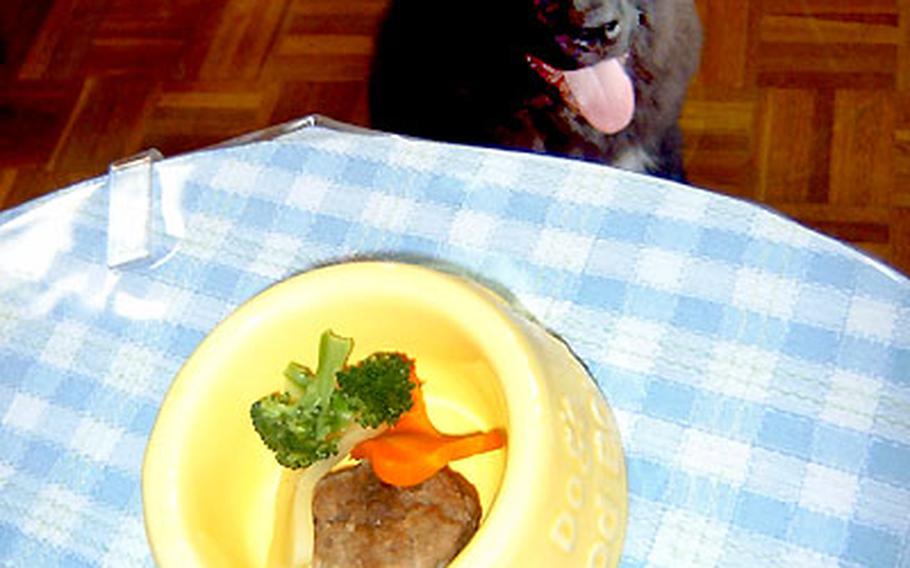 Queen, a 4-month-old Newfoundland, looks at a beef hamburger with vegetables, one of the two dishes for dogs served at Wonderland Dog Café. Queen belongs to café owner Elena Matsuda. (Chiyomi Sumida / S&S)

Queen, a 4-month-old Newfoundland, looks at a beef hamburger with vegetables, one of the two dishes for dogs served at Wonderland Dog Café. Queen belongs to café owner Elena Matsuda. (Chiyomi Sumida / S&S) 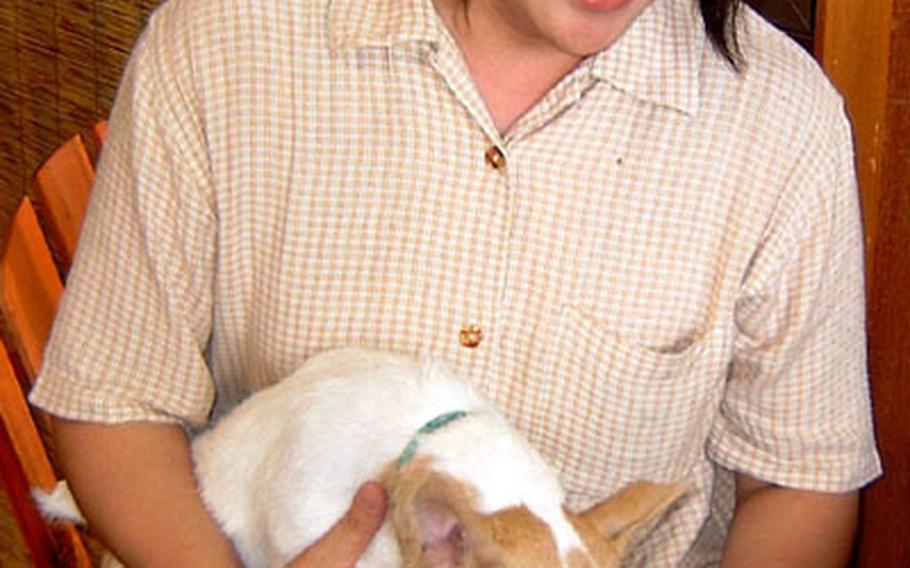 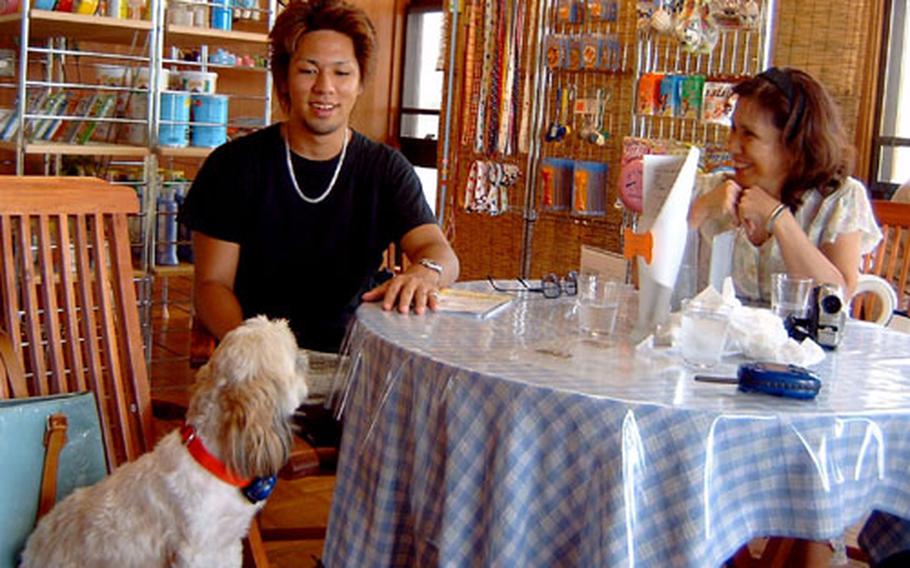 Fujiko, a Shih-Tzu, from Urasoe, enjoys a meal with her human family members. Her owner, Sugako Hasegawa, right, put a Bowlingual bark translator on her, but she preferred other types of communication with her human brother Ippei. (Chiyomi Sumida / S&S)

YOMITAN, Okinawa &#8212; This is a place for dogs and dog lovers only.

Wonderland&#8217;s tables offer two menus: one for you, and another for your dog. The dog menu offers two choices, beef hamburger and chicken pot-au-feu with no seasonings added.

The menu for humans has a little more variety, including hamburgers, spaghetti, fried rice and hot dogs.

For Biku, a 5-month-old Jack Russell Terrier, coming to the caf&#233; seemed to be one of the most exciting experiences.

While the couple sipped iced coffee, Biku ate up a bowl of pot-au-feu &#8212; a meat and vegetable stew.

Then Biku slipped off his owner&#8217;s lap and joined the caf&#233;&#8217;s two mascot dogs, a 4-month-old Newfoundland named Queen, and a longhaired dachshund named Wonper, for some fun.

While the three tumbled and rolled about, an 11-year-old Shi-Tzu from Urasoe barged in. More tumbling and panting, accented by a few yelps, invited laughter from the human visitors.

The Babas found the dog caf&#233; a great place to stop and relax without leaving their pet alone at home. Takeshi Baba said they were reluctant to go out on weekends once Biku became an important part of their life.

Bringing Biku to the dog caf&#233; brought an additional and totally unexpected benefit to the Baba family.

That is one of the reasons Elena Matsuda opened this dog caf&#233;.

She said the personality of dogs that live in an environment where they can play with other dogs is different from those raised alone.

But some dogs are not ready to socialize. Fujiko, another Shih Tzu who lives in Urasoe with her owner, Sugako Hasegawa, was apparently not ready to make her social debut.

She remained on the chair, watching the bundle roll and pant among the tables. Hasegawa brought Fujiko to the caf&#233; with her son, Ippei, and his friend.

Still, the outing was a joy for the whole family.

Dog toys are provided free. But while balls and rubber toys may be for dogs to enjoy, a new high tech toy, Bowlingual, is probably more for dog owners.

Bowlingual is an electronic device that translates dog into Japanese. Biku, the Jack Russell terrier, wore the Bowlingual microphone when he went off to play with his dog friends.

Biku and Queen started tumbling together. He barked again. &#8220;You wanna fight?&#8221; was the translation.

The main theme of the dog caf&#233; is for both dogs and their owners to play and have fun, said Matsuda.

&#8220;This is a place where people can play with their dogs and enjoy quality time together,&#8221; she said.

If you&#8217;re on Okinawa, take Highway 6 north from Torii Station and drive for about ten minutes. After passing Family Mart convenience store, turn left onto a narrow path at Coca Cola storage house. Turn right at a corner where a clinic and pharmacy are. Dog Caf&#233; Wonderland is a corner house on your left. The caf&#233; is open from 10 a.m. to 8 p.m. and is closed Wednesdays.

Bowlingual is a translation device invented by Japanese toymaker Takara. It is made up of two parts, the main palm-sized component and a microphone. When a dog barks, the voice is relayed and recorded into the main component from the microphone attached to the dog&#8217;s collar. Among approximately 200 translation patterns in its database, the best suited words will come out on a screen display with a cartoon face of a dog that shows how the dog is feeling at the moment. It also records sounds the dog made during the absence of his owner. The owner can later check them to see how his dog spent the day.