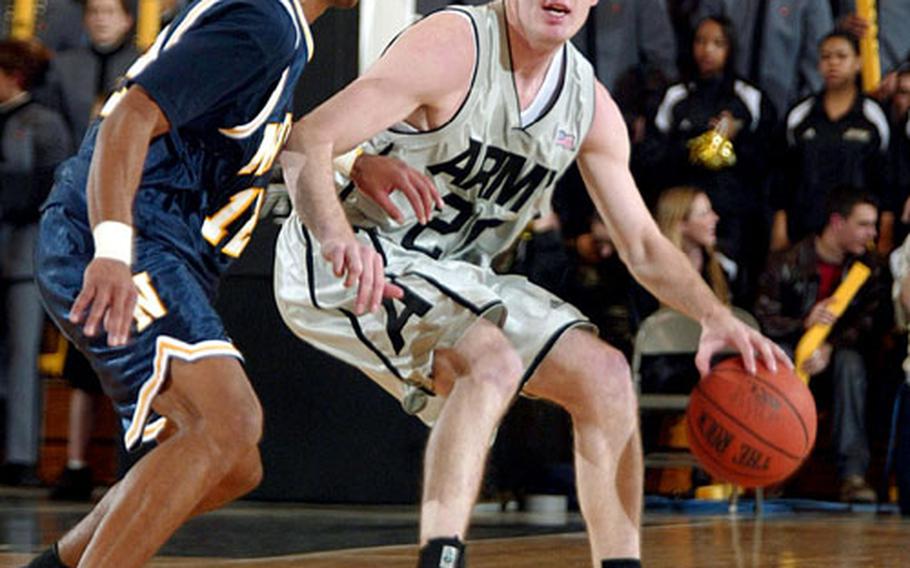 Andy Smith, right, who plays basketball at the U.S. Military Academy at West Point, is a 1999 graduate of Okinawa’s Kubasaki High School. He’s a rare case. Few DODEA graduates have the exposure, or often the skill, to make it to the college level. (Courtesy U.S. Military Academy)

While a parade of ROTC scholars and military academy appointees make a conga line to the United States from Department of Defense Education Activity schools annually, the ones who earn athletic, academic or arts scholarships can be counted on just a few fingers.

&#8220;Our communities are wired to military-related schools, scholarships and academies,&#8221; said Jeff Pellaton of Wuerzburg High in Germany, who coached wrestling and headed the music department at Okinawa&#8217;s Kubasaki High for 16 years. &#8220;We are not wired athletically or through the arts.&#8221;

DODEA-Pacific spokeswoman Mary Hibbs said it&#8217;s &#8220;difficult to speculate about scholarship categories and why scholarships are or are not awarded in various categories.&#8221;

&#8220;It&#8217;s not necessarily that other scholarship category figures are low for our students, but that military categories are high because of the environment in which our students live. Many of our students are more aware than their stateside counterparts of the opportunities the military provides to finance education.&#8221;

In some rare cases, an athletic diamond can be found in the rough.

Take the summer of 1985, Fulda, West Germany. Louisiana State&#8217;s basketball team, on a tour of Europe, stopped at Wildflecken to conduct a clinic for soldiers and youth. Head coach Dale Brown spotted a young man, 6-foot-8, wearing size 17 shoes, and sidled over to him.

The rest, of course, is history, as O&#8217;Neal would go on to play for Brown at LSU, then for Orlando and the Los Angeles Lakers, earning three NBA championship rings (and counting).

But the son of retired Army Staff Sgt. Phillip Harrison is one of just a few athletic success stories among former DODEA students:

&#182; Wes Mallard, a Seoul American student in the mid-1990s who played linebacker and on special teams at Oregon, was drafted by the New York Giants in the second round of the 2002 NFL draft.

&#182; Eric Zeier, a Heidelberg American product, became a four-year starting quarterback at Georgia from 1990-93, before playing a handful of seasons for Cleveland, Baltimore and Tampa Bay in the NFL.

&#182; David Page, Seoul American&#8217;s quarterback in 1994-95, redshirted at California in 1998, transferred to Hinds Community College in Mississippi, his home state, and then started parts of two seasons at Southern Methodist. He now works for the accounting firm Ernst & Young.

There are others, mostly at smaller colleges, but they are the exceptions, with lack of visibility and the stark physical difference between athletes in the United States and those overseas standing as the biggest obstacles.

But who notices, Etienne wonders, when college scouts are thousands of miles away and the trip overseas costs thousands of dollars to view riches that are at best uncertain?

Rarer still is the DODEA student who earns an academy appointment and plays collegiately, such as Andy Smith, a West Point junior who led the Cadets in scoring this season at 9.6 points per game.

His route to the U.S. Military Academy was a roundabout one, taking him from Kubasaki in 1999 to New Hampton Prep in New Hampshire before winding up at West Point in the fall of 2001. The selling point?

&#8220;The fact that I would get a free education at one of the best schools in the nation, I&#8217;d have a chance to play right away and the program had a lot of young players coming in,&#8221; Smith said.

Smith did not go to West Point exclusively to play ball. &#8220;My uncle graduated from West Point, and the Army has been in my family,&#8221; he said.

But he might not have had the same opportunity to play at the Division I level. That&#8217;s because players in the Pacific simply don&#8217;t match up physically with those in the United States, where athletes are generally a half-foot taller and 30 to 40 pounds heavier.

The size differences and lack of scouting should compel Pacific athletes with big dreams to think small, Smith said.

There are ways to attract attention from a major university. Etienne spent time over the summer and just last month touring some Texas schools, and he also has appointments to West Point and the Air Force Academy to consider.

But even a glowing videotape and stellar r&#233;sum&#233; can&#8217;t replace actually being there &#8212; which is typically imperative for students of music and the arts, for long periods, to succeed in required auditions, Pellaton said.

&#8220;To be awarded a music scholarship, the recipient must undergo arduous audition procedures,&#8221; Pellaton said, adding that submitting a tape or compact disc &#8220;is just a preliminary.&#8221;