‘Divided We Fall’ says secession is a real, and dangerous, possibility 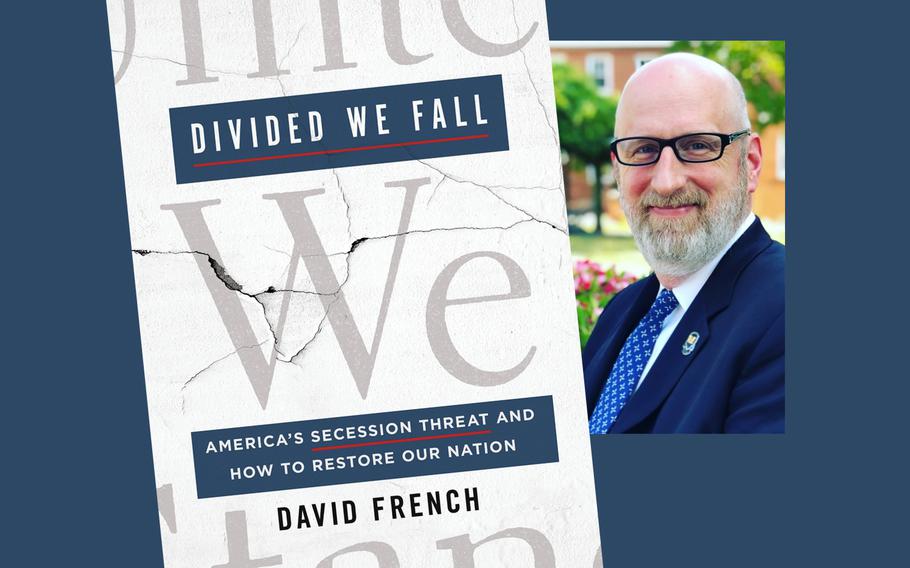 A spate of recent book titles shout from shelves and online shopping carts, offering up the worst versions of people we already hate for thirty bucks or less. Legions of voices on traditional and social media will do the same, ostensibly for free. “Divided We Fall: America’s Secession Threat and How to Restore Our Nation,” by David French, makes no such offers. Instead, the author, a U.S. Army veteran and Constitutional attorney, warns that the price of hate and division is very high indeed.

“Divided We Fall” is part dystopian vision of America’s future and part prescriptive for the ills of an ailing — even failing — body politic. Among those ills, French notes, is a lack of decency in political discourse, driven by negative polarization. In this zero-sum culture-war mentality, each side not only disagrees with but hates and mistrusts the other. Each believes that “we” must win, and “they” must lose, making compromise impossible, even undesirable — between partisans on Capitol Hill and family members around the Thanksgiving table.

In his first sentence, French warns that “the continued unity of the United States cannot be guaranteed.” His premise is that polarization and the increasing geographic separation of ideological groups is creating extremism, heightened division and dangerous instability in the nation. This instability, he says, may result in a disunited United States. French is not the only voice crying in this particular wilderness, but he stands apart by offering a remedy, telling Americans both red and blue they have the power to avoid disaster. To spur readers to meaningful action, he uses fiction to illustrate that secession is a very real possibility and why it’s a bad one.

In three ominous chapters, French lays out a trio of dystopian versions of an America yet to come, reminiscent of cautionary staves by Dickens. The first two are alternate secession scenarios, one a blue-state withdrawal, the other red. The details woven into these fictional accounts make them eerily believable in the context of daily news reports, which is of course the point. Some readers may shrug off or even cheer the idea of California or Texas breaking away — as in the first two scenarios — until they read the third. A corollary to either of the previous two, this one depicts the global implications of a no-longer-United States, with the U.S. military thrown into confusion and other world powers moving quickly to take advantage of economic and political chaos.

“Americans who had once decried globalism and scorned American alliances now saw and experienced the high cost of lost international institutions,” goes the narrative.

For military families living in various parts of the real world, this presents frightening possibilities: hastily and violently established boundaries separating families and isolating deployed military members, possibly creating new combat zones. The pandemic has taught us not to take for granted our global village and the ability to traverse it, and the events of this year lend weight to French’s dark visions.

After revealing these dire outcomes, French outlines the ways America might change these shadows by an altered life, both political and personal. Some of his suggestions involve governmental and cultural shifts, for example a return to federalism that would accommodate state and regional pluralism. Emphasizing the importance of guaranteed, uniform civil liberties while giving states greater local control, French brings to bear his scholarship and considerable experience as an attorney defending civil liberties.

He also brings his own experience to his call for personal change, recognizing that government alone can’t create a more civil society. He writes about his military experience, saying a yearlong military deployment proved transformative at a time when he was “deeply entrenched in partisanship.” Seeing the cost of internal strife in Iraq changed the way he viewed cultural differences in the U.S. when he returned.

“My time in Iraq had changed me,” he writes. “It changed my regard for my fellow citizens, especially my political opponents. If I had been willing to die for them while wearing the uniform of my country, why should I regard them as mortal enemies today?”

This regard is at the core of French’s message. In “Divided We Fall,” he encourages “true tolerance,” which he defines as “respect and kindness for people who are out of your group.” Tolerance for those you agree with, he points out, is not tolerance at all. He advocates patriotism that recognizes liberty for the good of others, not for self. He also appeals for a return to decency and character, in ourselves and in those we elect to represent us.

French is not looking for a kumbaya moment, though. He acknowledges the wide diversity that must exist in a free and pluralistic society. He also takes into account the overwhelming power of money and the role it plays in politics and winning the news cycle. He doesn’t argue that change will be easy, only that the stakes are too high to remain silent or inactive. Continued hatred comes at far too high a price.

In a season of sharp contrasts between red and blue and with a major election looming, French’s book is a timely and necessary read. Even those who don’t quite believe in the imminent danger of secession will appreciate his call to renewed courage and character. He offers a timeless reminder of the importance of justice, mercy and humility toward one another — imperfect people in an imperfect world, still hoping for a more perfect union.

Terri Barnes is a book editor and the author of “Spouse Calls: Messages From a Military Life,” based on her long-running column in Stars and Stripes. She’s online at terribarnesauthor.com.