‘Dishonored’ puts fate of the world in gamers’ hands 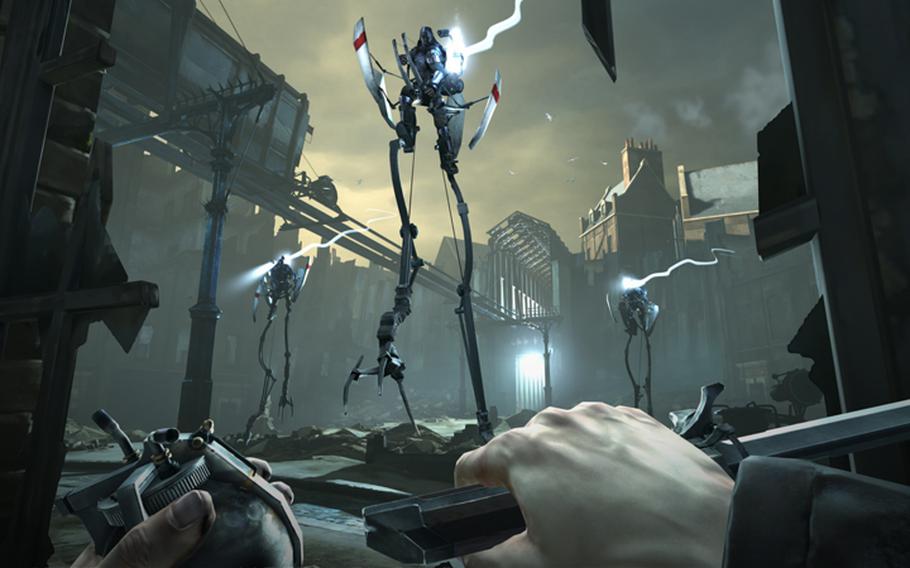 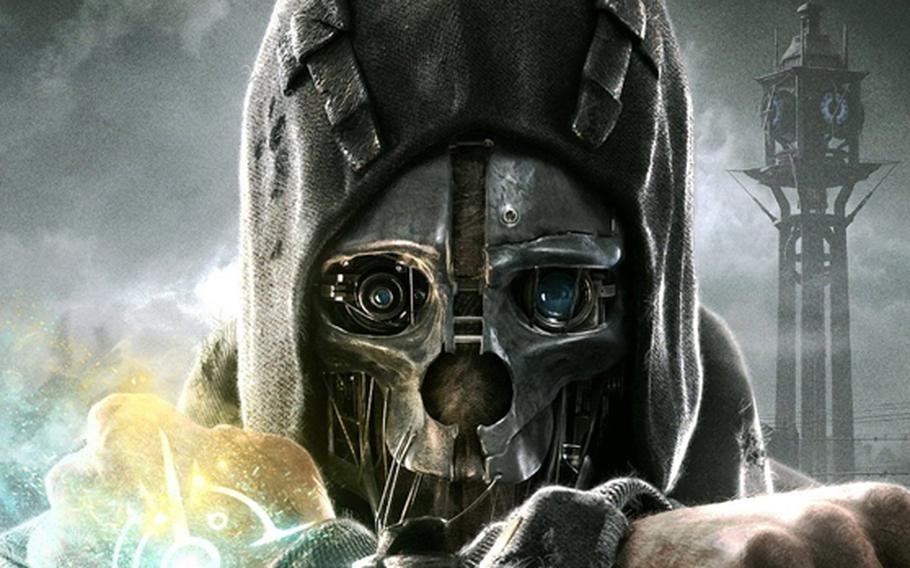 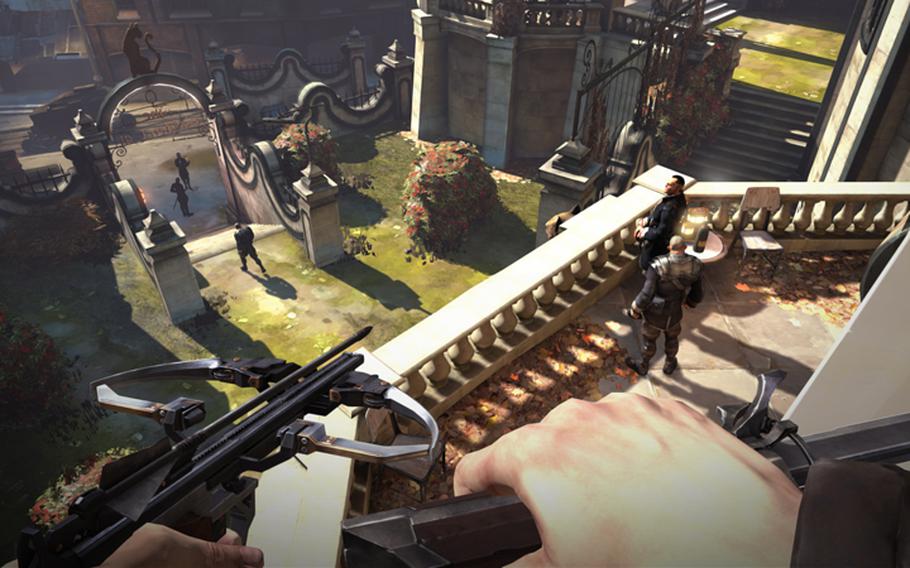 "Dishonored" mixes the best elements of the parkour of “Assassin’s Creed” and the stealth combat of “Splinter Cell” and adds a host of interesting mystical abilities. (Courtesy of Bethesda Softworks) 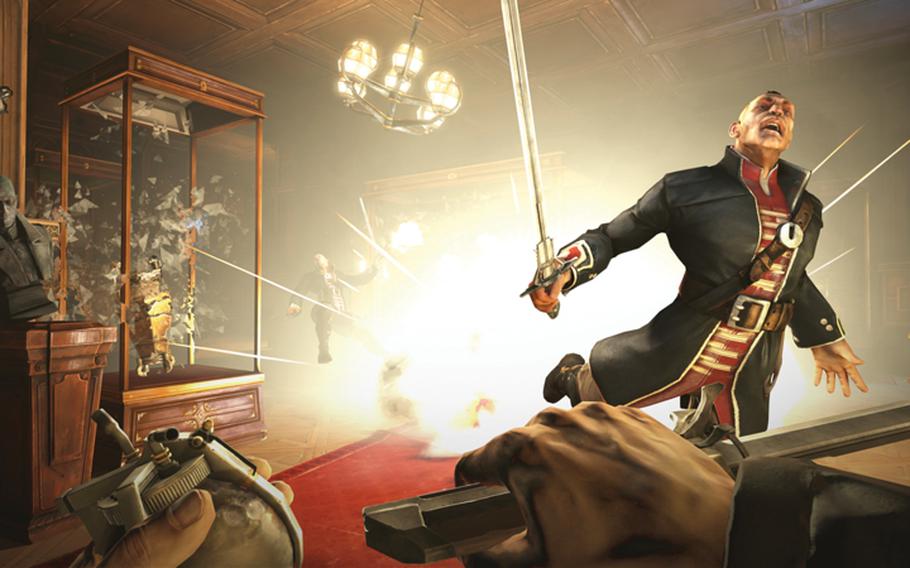 A  game like “Dishonored” can be a journey of self-discovery.

Are you prone to mercy, vengeance or simple expediency? If you play through “Dishonored,” you are likely to find out.

The M-rated action game from Bethesda Softworks is set in the city of Dunwall, a decaying industrial city with a steam-punk vibe that’s been stricken by a virulent plague. You play as Corvo, the empress’ protector who has been sent to other lands to discover whether they have found a way to deal with the plague. Unfortunately, as soon as you return, the empress is assassinated before your eyes and the blame is placed on you.

Your capture sets up the first mission, escaping from Dunwall’s prison. It’s also here that your ethical decisions begin.

The question is whether you will sneak out of prison or fight your way out. If you choose to fight, it’s not too hard to slit a guard’s throat, hide the body and move on to the next. It’s a bit bloodthirsty, but efficient.

However, the game lets you know early on that you’ll earn a better outcome if you show mercy. If you’re inclined in that direction, you choke out your enemies or shoot them with sleep darts — or simply avoid them by using your stealth abilities.

Stealth involves a lot more than skulking around in the shadows. It’s important to take advantage of Corvo’s climbing and jumping abilities — definitely on par with those of Ezio of “Assassin’s Creed.” Not only can your athleticism help you avoid guards, but taking the less-direct route can lead to helpful items, such as health potions, money, bone charms and runes.

Bone charms can give you a fighting edge by doing things like decreasing enemies’ chances of shooting you or increasing the speed of your sword.

Runes are mystical symbols connected to a smooth but creepy fellow known as the Outsider, whom many have worshiped like a god. You meet the Outsider in a dream, where he presents you with the power of “Blink,” which is sort of like teleportation. This is the only power you really need because it’s vital to moving around the landscape without detection. However, you also can use the runes you discover to unlock powers that let you bend time, jump farther, run faster, see enemies through walls, possess the bodies of animals or people or summon a swarm of rats to devour your foes. Obviously, some of these can send the game on a much darker course.

You put these skills to use in a variety of well-designed missions. Each offers multiple paths to its goal, letting you decide whether to leave a trail of carnage or to sneak through the cityscape without detection — or a combination of the two.

The settings are populated by a variety of enemies, ranging from zombielike plague victims, thugs and a gang of assassins, who have most of the abilities you possess. However, your primary opponents are Dunwall’s city watch. In addition to keen eyes, the guards have an interesting collection of devices that can make your day interesting. These include the wall of light and arc pylon, which can zap you into oblivion, as well as alarms and automated watch towers. In most cases, you have two options for disabling these devices, rewire them to attack your foes or simply remove their power source. Getting to the power source or control box can be a challenge since they are usually guarded and can be relatively inaccessible. However, solving these — and many other puzzles — is part of what makes the game so fun.

Another important part of the fun is interacting with the various characters, often while holding their fates in your hands.

After the empress’ assassination, the conspirators — who had been her key advisers — spirit away her daughter and take control of the government. You side with a budding resistance cell that gives you most of your primary missions and side quests. The primary missions generally involve assassinating one of the conspirators or their key supporters. However, you’ll always receive a side quest that will allow you to take a less vengeful and more merciful course toward neutralizing your target. For example, your first target is a hypocritical religious leader. You have the choice of killing him or finding a brand that will literally mark him as a heretic and render him powerless.

You can also take missions from characters you encounter in the middle of primary missions. For example, the blind witch Granny Rags offers you a tantalizing gift if you eliminate the thug Slackjaw, who also can be one of your allies.

The game play is smooth and the controls are efficient — something I greatly appreciate after playing a string of games with sloppy or sluggish controls.

The graphics are good, offering a slightly surreal vision of the crumbling city and its denizens.

The game earns its mature rating for occasional beheadings and gruesome rate attacks.