‘Destiny 2’ improves upon original in nearly every way 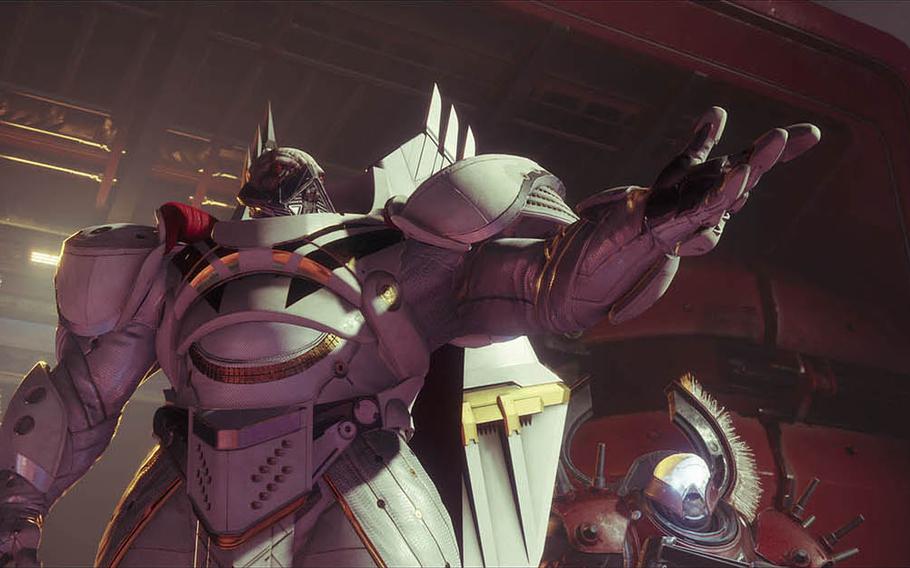 “Destiny 2” represents a giant leap for its franchise.

When “Destiny” launched in 2014, developer Bungie and publisher Activision delivered a game that was intended to expand, update and evolve over the course of several years. Although the game initially failed to meet the lofty expectations of many gamers, the following three years saw a number of upgrades that refined its mechanics, added new enemies and combat areas and offered new gameplay experiences. The final state was a thoroughly enjoyable sci-fi shooter built around both cooperative and competitive action. However, the game was still bogged down by repetitive encounters, inconsequential clutter and long load times.

In “Destiny 2,” it seems that almost everything about the original “Destiny” has been overhauled, or at least enhanced to place the focus on action.

The game unfolds in the distant future, after humanity has built a civilization that spanned the solar system — and then lost it because of attacks by aliens.

The original game begins with humanity encamped in one remaining city, huddled around the Traveler — an almost magical alien sphere that served as the catalyst for the Golden Age of interplanetary expansion. As a Guardian, you used special powers provided by the Traveler — as well as a hefty helping of firepower — to push back aliens invaders. In the game’s add-ins, you staved off a series of new threats.

In the opening mission of the new game, an alien race known as the Cabal captures the city and short-circuits the Traveler, which leaves the Guardians without their powers and on the run.

This means that even if you import a character from the original game, you’ll need to start at square one to retrain and re-equip your Guardian. But that’s OK. There’s a lot of fun to be found as you help build a team that can fight back.

The lack of power doesn’t actually last very long. Exploration of a huge area known as the “European Dead Zone” reveals a new source of the Traveler’s power, which enables you to once again tap into the elemental forces of electricity, the sun and the cosmic “void.” By the end of the game, each Guardian — whether a hard-hitting Titan, stealthy Hunter and mystical Warlock — can wield each of these powers by switching from one subclass to another. However, at the beginning, you get access to only one subclass. The others are unlocked as you progress through the campaign.

For “Destiny 2,” developers have replaced a subclass for each type of Guardian, and that’s the role you fill once you regain your powers. In these new subclasses, Titans can tap into the power of the void to equip a throwable shield, like Captain America. Warlocks can summon a flaming sword that shoots fireballs. And Hunters can activate a powerful electrical staff. When each of these powers is activated, it delivers a spectacular and effective blow to surrounding enemies.

One of the biggest changes is the creation of a coherent campaign. Unlike its predecessor, “Destiny 2” is built around a well-structured and interesting story line. The original game felt like a string of barely connected missions with only the thinnest thread of a story tying them together. In the new game, each mission advances you toward a discernible goal and offers diverse and interesting challenges and enemies to overcome.

Beyond the campaign missions, each planet and moon offers a wide range of side quests — something new in the “Destiny” portfolio. In the original game, each battleground offered a handful of replayable missions from the story line — such as it was — and “patrols,” which were no more than brief gathering assignments. In the new game, you’re still left with a large number of side quests even after completing the campaign. Each gives you a specific goal, plenty of action and a nasty foe at the end.

When not tackling one of these missions, you can wander the worlds to your heart’s content. The terrain is covered with enemies, some of which are powerful enough to yield a lucrative reward upon their demise. Each world also offers several “public events” — intense battles that erupt periodically and are open to all comers. The events were very popular when they were introduced to the original game, so it’s good to see them back. What’s even better: There are more of them, they happen more frequently and there’s a timer on the map that lets you know when the next firefight will flare up.

This focus on mission-based combat makes most encounters feel more intense and meaningful — and a lot less like random drive-by shootings.

Something else that helps maintain a high level of activity is the design of each battleground. Although they seem to be just as large as in the original, the new maps suffer less from battlefield sprawl. They are packed with many more foes and activities, so you rarely experience a long stretch of nothing between two somethings. In addition, each map is dotted with fast-travel points that allow you to zip from one hotspot to another.

These tweaks are typical of the refinements that have been made throughout the game. For example, interplanetary travel is now a one-step process and load times are much quicker. In addition, upgrading and maintaining your collection of weapons and gear has been streamlined — a wonderful development for those of us who have friends who spent as much time fiddling with their inventory items as fighting in the original “Destiny.”

Although your character will increase in strength and abilities as he gains experience, the real focus is on acquiring newer and more powerful weapons and armor. This is a key ingredient to the allure of games like “Destiny.” Acquiring more and better loot, arms and armor whets the appetite and keep players coming back. “Destiny 2” seems to have perfected the formula. Throughout the campaign, you steadily find better items to equip. In fact, for most of the campaign, it’s pretty certain that half of your gear will be replaced with better stuff between the time you jump into the fray and the time you collect the final rewards. Things slow down once you reach the level cap — currently set at 20 — but not by much. At that point, the focus becomes finding gear that has special attributes that will help you deal with high-level foes and team-based challenges. If the original game is any guide, expect higher-level caps, more exotic gear and additional reasons to need them as add-ons roll out.

Much of this action can be experienced solo. But blasting aliens and robots doesn’t become truly addictive until you join a good group of friends to share the adventure.

After the first two campaign missions, everything in “Destiny 2” can be done cooperatively. You can join a friend or two to tackle campaign missions, side quests and public events or undertake a team-based challenge — one of the most intense and enjoyable aspects of the game.

At launch, the only team-based events available were three-player strikes. While these are terrific fun, it’s a bit disappointing when compared to the robust lineup of events offered by “Destiny” in its final state. Fortunately, Bungie has plans to start delivering more content a week after launch — including complex six-player raids. It’s likely more will follow.

For those seeking more competition than cooperation, “Destiny 2” offers head-to-head play in its Crucible. This features four-on-four competition in a variety of settings and game modes, most being some iteration of capture the flag.

Personally, I think this segment of the game has lost something in its transition to the new format. In the original “Destiny,” competition was six-on-six. This provided more targets and more opportunities to unleash your superpower on a cluster of enemies — one of the most satisfying experiences in the Crucible.

The technical aspects of the game have also been refined. The graphics are much more lush and detailed. The controls are more fluid. And, as mentioned before, load times have been improved, when traveling from one world to another or simply opening an inventory screen.

“Destiny 2” is one of the few shooters that is rated T for teens. The label warns of blood, language and violence. I don’t recall seeing any blood or hearing any coarse language, but I did witness — and perpetrate — a lot of violence.

With the transition from “Destiny” to “Destiny 2,” it seems developers were intent on keeping the action moving. Lessons learned from three years of developing and refining the original game have resulted in a game that’s much more focused, which means more fighting and more fun.

Bottom line: A- “Destiny 2” is an intensely fun experience for anyone looking to join their friends in fighting a galaxy’s worth of evil.Platforms: PlayStation 4, Xbox One (PC available on Oct. 24)Online:www.destinythegame.com

Activision provided a digital copy of this game for review.