'Dead Space 3' on the event horizon of horror 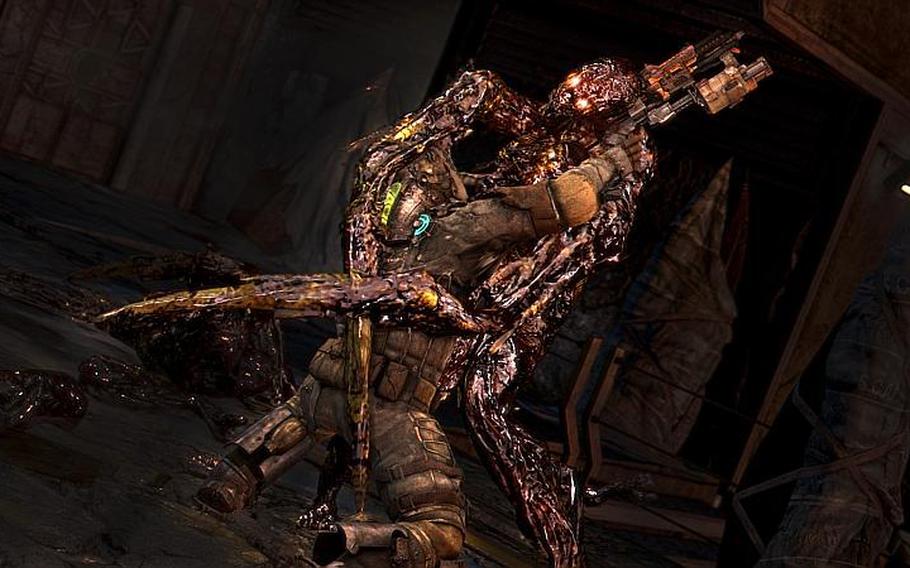 A necromorph finishes off a character in ‘Dead Space 3.’ (Courtesy of EA)

A necromorph finishes off a character in ‘Dead Space 3.’ (Courtesy of EA) 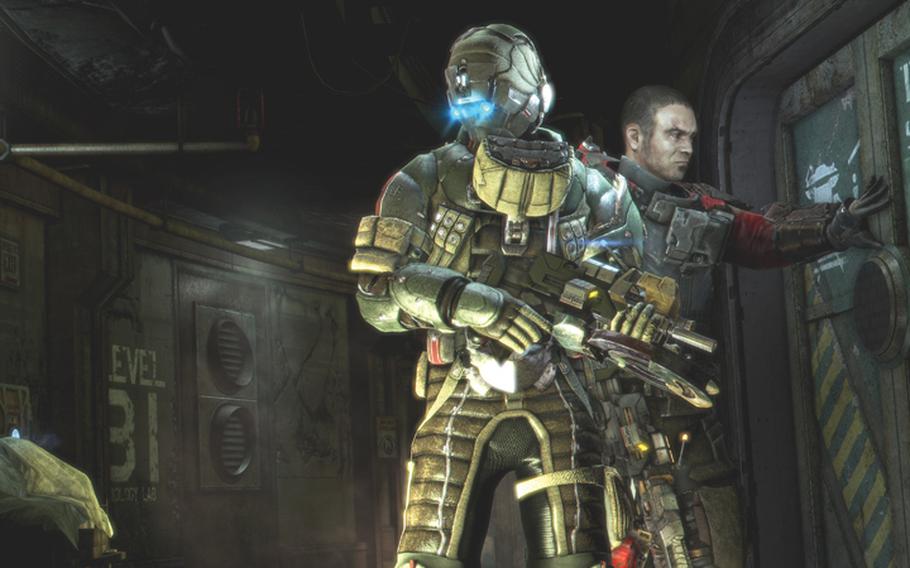 Isaac Clarke, left, and John Carver prepare to head into battle in the third installment of the ‘Dead Space’ series. (Courtesy of EA) 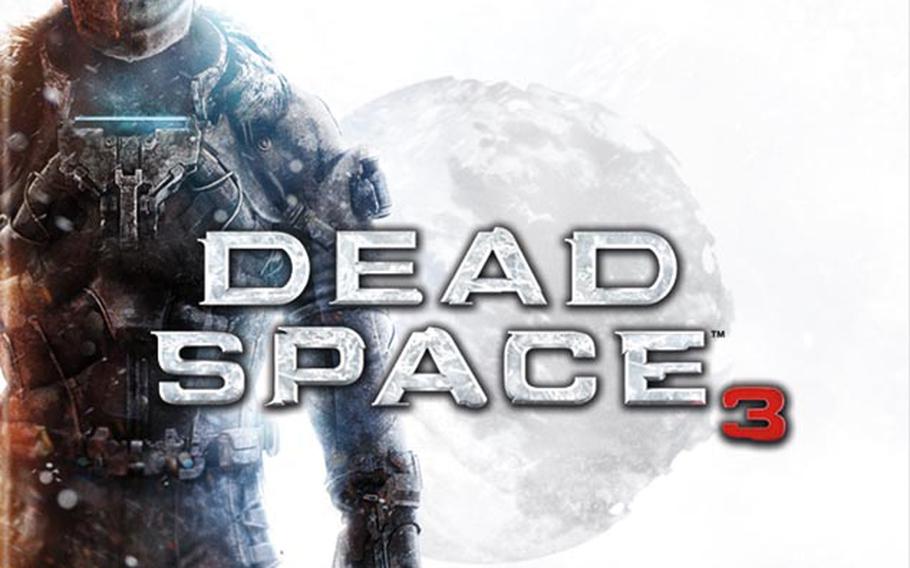 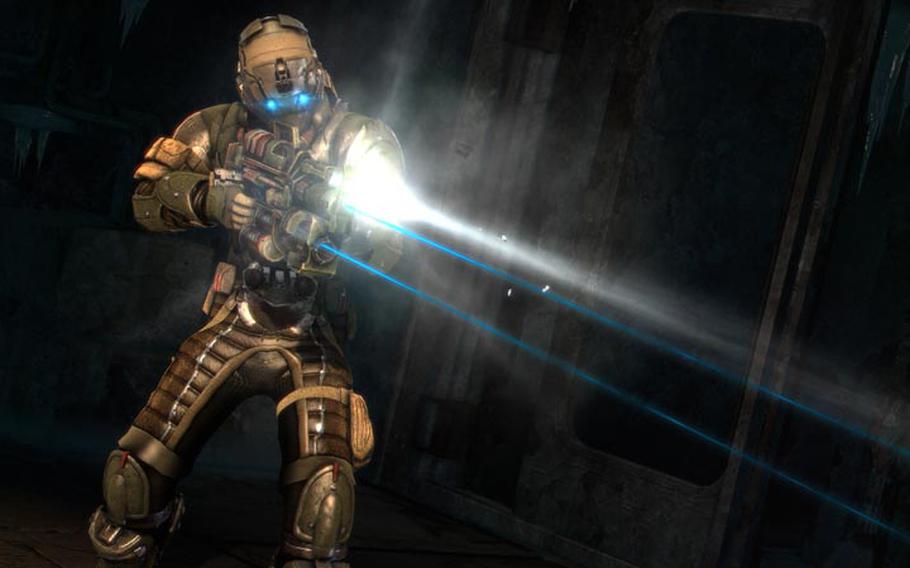 The “Dead Space” series tells the story of Isaac Clarke and his confrontations with the Markers, an ancient alien devices turn humans into homicidal maniacs. (Courtesy of EA)

In space, no one can hear you scream. In my house, they can — and did.

I invited some friends over to help me — and Isaac Clarke — tackle the latest necromorph invasion in “Dead Space 3.” The shooter franchise from Electronic Arts had already delivered a solid series of thrills, chills and frights, and we were expecting more. We definitely weren’t disappointed — which means there was a lot of screaming.

The “Dead Space” series tells the story of Isaac and his confrontations with the Markers. The ancient alien devices turn humans into homicidal maniacs. They also reanimate the remains of eviscerated victims, forming grotesque abominations bent on destruction. Isaac spends most of his time slicing, shooting and stomping these creatures, known as necromorphs. He also has to deal with a crazy band of cultists who welcome the Markers and the devastation they bring.

In the series’ third installment — fourth, if you count a very cool Wii game that served as a prequel — Isaac heads to the ice-covered planet of Tau Voltanis. He’s there to save a former girlfriend but learns that the planet might hold the key to defeating the spreading Marker menace.

This time around, Isaac is much better equipped to handle the situation thanks to a new weapon-crafting system and the ability to play co-operatively online.

You’re still issued a few weapons, but your arsenal is likely to be filled with items of your own making. As you explore, you’ll find parts that can be used to build a wide range of interesting and deadly weapons, including a chain lightning gun, a rotating plasma cutter and a gun that fires explosive javelins. And you can upgrade all of your weapons to give them added firepower, quicker reload times and more.

The other big change in “Dead Space 3,” is the addition of online co-op play. The second player takes the role of Sgt. John Carver, who has lost his family to the Markers and suffers from hallucinations because of their influence. Although Carver is a major character in the single-player campaign, the co-op campaign offers additional dialog and cutscenes, as well as a few more side missions. In addition to added content, the co-op option lets you trade weapons you’ve crafted, which could prove very helpful to a friend in need. The co-op mode allows players to easily drop in and drop out, so you aren’t restricted to playing only when a specific friend is available.

Another new feature is the ability to replay chapters of the story, which allows you to go back and explore nooks and crannies more thoroughly. Such exploration can be prove very beneficial since progress and inventory carries over from one game mode to another.

Although these are some significant changes, fans will be happy to know that little has changed in the way of gameplay and intensity.

Necromorphs are basically nasty agglomerations of reanimated tissue, so it takes more than a head shot to stop them. You need to dismember them, or they’ll keep coming at you. This explains the wide array of exploding and slicing weapons. It also explains why the game is solidly in the mature category.

You’ll meet many familiar “faces,” such as the scythe-handed slasher and the multiarmed lurker, but you’ll also encounter new foes formed from a long-dead alien race. Each uses a different form of attack and presents a different challenge in taking it down. The action can get quite exciting when several different kinds of enemies attack at once. Sometimes it’s enough to whip out your plasma cutter and slice off an arm and a leg. However, when facing fast-moving foes, you might opt to freeze them with Isaac’s stasis ability before blasting them with a Tesla beam. Or, you can use your armor’s kinesis module to pick up a heavy object — or a fallen foe — and fling it at oncoming necromorphs. Of course necromorphs aren’t your only concern. You also have the Unitology cult’s soldiers. Though they’re more-traditional foes, their armor ensures that they aren’t easy to kill.

The story is well-paced and interesting, but seems to cover only the basics. It has the requisite amount of sorrow, fear and heroism. You will learn more about the Markers and previous human encounters with the menace. But I wanted something a bit deeper from the series’ third installment.

The levels are very well constructed, offering a good variety of tight spaces and wide-open battlegrounds. They also present a selection of puzzles that require the use of Isaac’s stasis beam to stop action and his kinesis module to move large objects. The puzzles don’t usually require a lot of brainpower, but you sometimes need to be observant to catch important clues.

“Dead Space 3” delivers a high dose of frightening encounters and intense action. However, there’s nothing that approaches sheer creepiness of the hospital area in the original “Dead Space.”

The graphics are excellent — perfect for inducing nightmares in the impressionable.

The controls system is a little complex so there’s a bit of a learning curve.