Conspiracy theorists say they can prove passage to S. Korea leads under DMZ 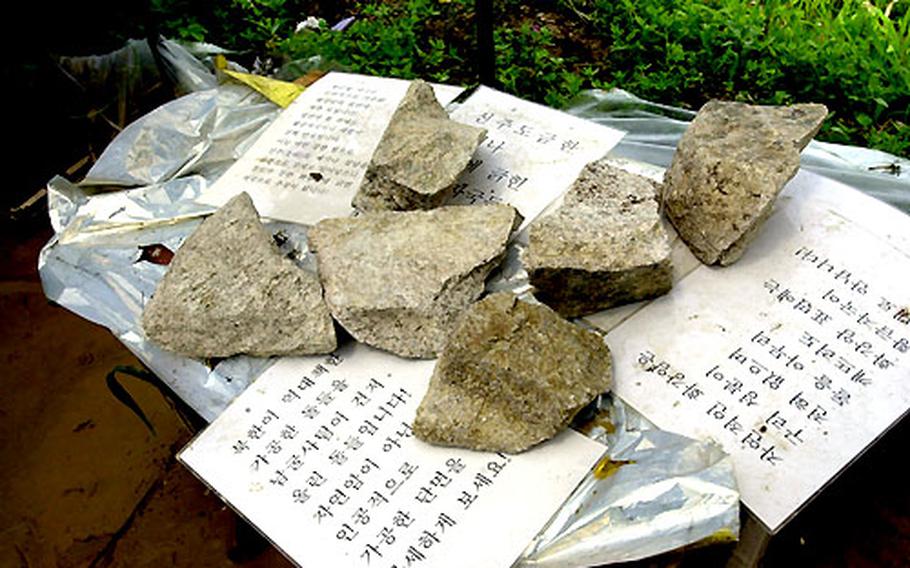 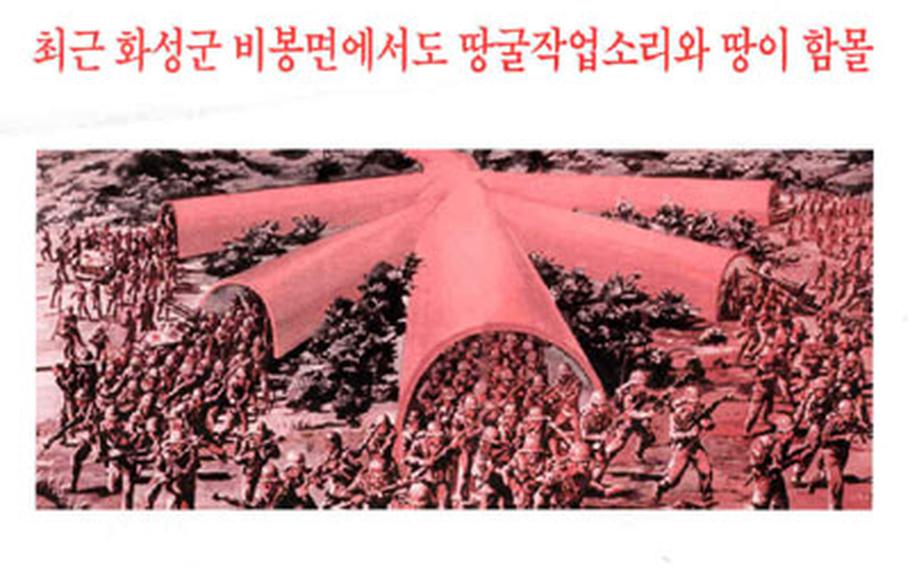 A promotional flyer from the Invasion Tunnel Hunters reads: “Shocking! Discovery of evidence of tunnel infiltration South Korea near Suwon. Recently at Pebong-myon, Hwaseong-gun, the sound of tunnel digging work was heard and some sunken ground found. North Korea is coming down here now digging underground tunnels. Let’s preserve the Republic of Korea and protect our life and property.” () 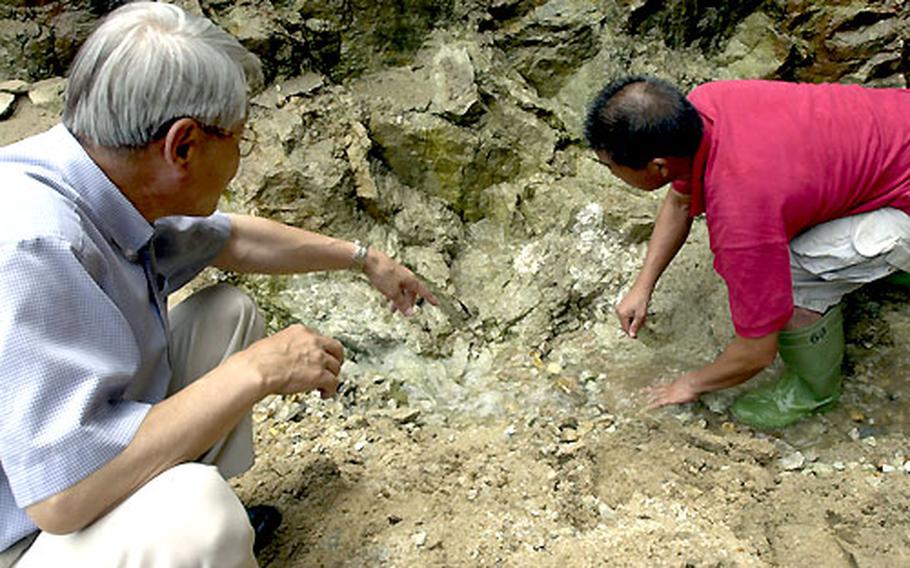 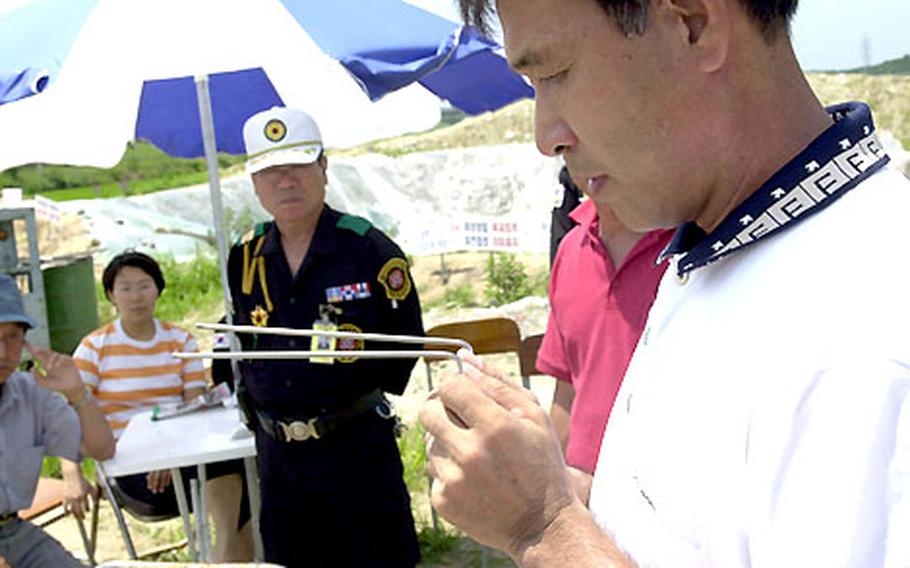 HWASEONG, South Korea &#8212; Yoon Yo-kil is convinced that below the earth&#8217;s surface under solid rock, North Korean soldiers are tunneling all over South Korea.

Yoon, a diminutive, neatly dressed former missile scientist with the South Korea&#8217;s Defense Ministry, is part of the Invasion Tunnel Hunters, an aging group of quixotic Korean men convinced communists are underfoot, preparing for the start of the second Korean War. Highly educated and fluent in English, Yoon presents a passionate case.

He has an audio tape he said proves it, with rhythmic tappings and voices of North Korean soldiers. Microphones were lowered into deeply bored holes and connected to a special noise-activated tape recorder, he said.

The group has sunk thousands of dollars into a gaping, 6-story deep, damp hole in Hwaseong city on public land. The vast pit spirals down into deep rock, with pooling water drawn out by a sump at its lowest point.

Without a proper permit, the group broke ground last fall on a quest they said would vindicate the naysayers with proof North Korea was tunneling under the DMZ &#8212; even as far as 60 miles south of the Demilitarized Zone. Yoon says the tunnels run by major military installations, including the 51st South Korean army infantry division, an air force base in Suwon, the Korean marine corps headquarters in Pal-an and near Osan Air Base.

But Defense Ministry officials and residents near Hwaseong dismiss the group&#8217;s claims. And the city of Hwaseong is trying to figure out how to fill in the massive hole dug by the group.

&#8220;They haven&#8217;t found any objective evidence for their claims, so I can&#8217;t trust what they say,&#8221; says Kong Pyong-wan, an official in the Mesongmyun District Office, an area that lies within Hwaseong City.

But Yoon begs to differ. In a tent near the dig site, the tunnel hunters have a wall of posters documenting their progress. Among the finds: rocks with clear markings from excavation machines, an alleged North Korean battery and special steel cables from Japan used to support the tunnel, the group claims.

The tunnel hunters are an organized, focused group and have received attention from Korean media, the Wall Street Journal and the BBC. They have erected banners near the Hwaseong site highlighting their publicity.

On a recent day, Ha Jin-soo, 53, of Seoul, held vigil over the pit&#8217;s bottom. With rubber boots, he operated the pump, attempting to keep at bay the rushing water seeping endlessly from the rock. He spends a couple nights a week at the site, sleeping there.

The official world might scowl at the tunnel hunters, but their beliefs are rooted in real history. Four North Korean tunnels have been discovered under the DMZ since 1974, two of which could support 30,000 troops passing through them per hour.

The tunnels are part of the legend of the Koreas, divided since the end of the war in 1953 by the DMZ. But tales of infiltration, subterfuge and spying abound, with commandos from both sides over the years successfully sneaking into the other&#8217;s territory.

&#8220;The opposing United Nations Command had been aware of an earlier North Korean tunneling effort &#8230; but was surprised when new evidence came up that indicated the north was hard at work underground again,&#8221; according to USFK background information published on its Web site.

Undeniably, Yoon is a patriot, coming from a generation of Koreans who grew up with fresh memories of the war, which killed an estimated two to three million Koreans.

But the methods of detection are a bit controversial.

Choe is a soft-spoken man who says he honed the skill while working for Samsung Construction in Iraq in the early 1980s. While building a road from one of Saddam Hussein&#8217;s palaces to the airport, Choe claims he detected a secret tunnel and later informed U.S. officials about it.

Choe said he believes Saddam could be hiding there now.

With careful steps and a ginger hold on the dowsing rods, Choe illustrates how the rods react when passing over metal wires. The rods also react around humans, and Choe showed how the rods move when placed over a comrade&#8217;s head.

Yoon said his group briefed former 8th Army commander Lt. Gen. Daniel R. Zanini last year on the tunnel situation, and Zanini vowed to follow up with the group. But Yoon said he hasn&#8217;t had contact with the U.S. Army since.

Although Yoon says the North Korean tunnel has been pinpointed with dowsing rods, the group has yet to burst through a communist tunnel. His explanation is simple: the North Koreans have heard them coming.

Likely the weakest part of the story, Yoon says the North Koreans cover their tracks by filling the tunnel back in with debris and rerouting. The &#8220;countermeasures&#8221; are skillfully executed and accounts for the rock found with scraping done by TBMs &#8212; small, tunnel-boring machines purchased by the North Koreans.

How would the North Koreans provide life support for people in the tunnels such as air and water? Yoon&#8217;s answer is simple: pipes and pumps.

Through donations raised by a pastor affiliated with the group, it has spent at least $100,000 on Hwaseong excavation. But the group has run out of money and is afraid the city will fill the hole in, burying their quest.

On a recent day, aging Korean military veterans, dressed in official-looking security uniforms, guarded the site. Yoon said his hope is the U.S. Army will listen to his claim and help the tunnel hunters.

In the past, U.S. experts have studied the problem and examined the methodology used to detect tunnels, Ferguson said.

The South Korean government has investigated the site. Cho Pyong-young, a civilian working on the South Korean Joint Chiefs of Staff&#8217;s intelligence division, said a team of experts from Hanyang University has visited the Hwaseong site.

They didn&#8217;t find any evidence of tunnels, but Cho said there&#8217;s nothing they can say to convince the Invasion Tunnel Hunters.

Daniel Lee and Choe Song-won contributed to this report.