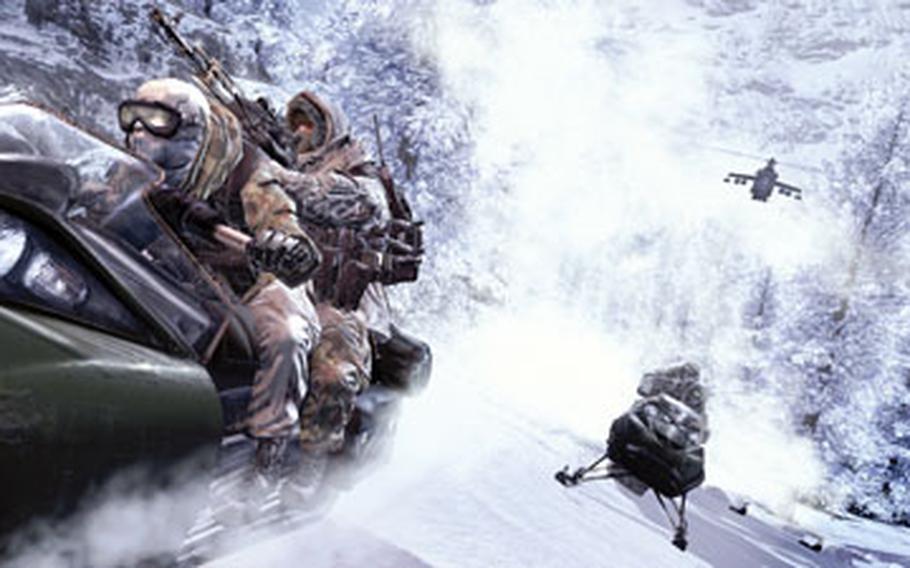 During the course of “Modern Warfare 2,” gamers play several characters, one of which is chased by Russian soldiers on snowmobiles. (Activision screen shots)

During the course of “Modern Warfare 2,” gamers play several characters, one of which is chased by Russian soldiers on snowmobiles. (Activision screen shots) 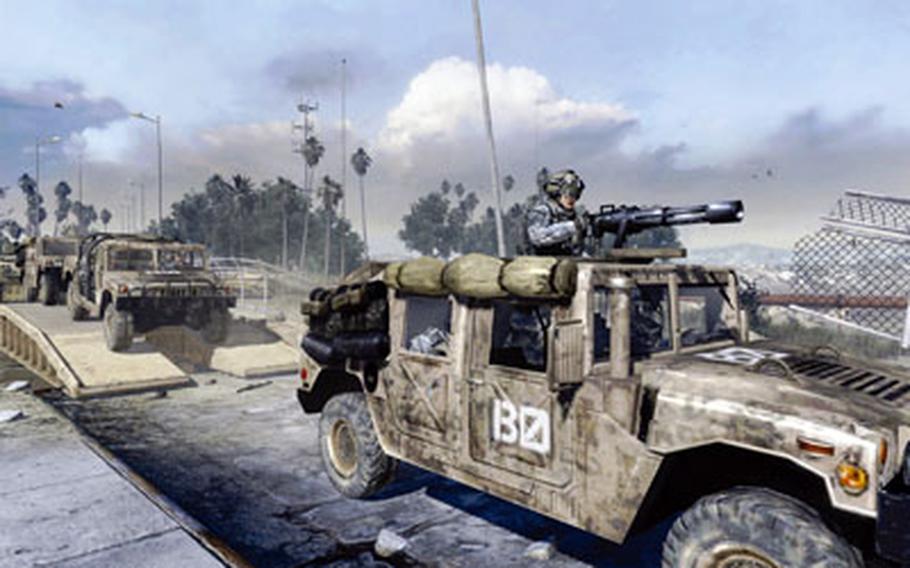 Activision screen shots American Humvees rumble over a bridge in an early mission of “Call of Duty: Modern Warfare 2.” () 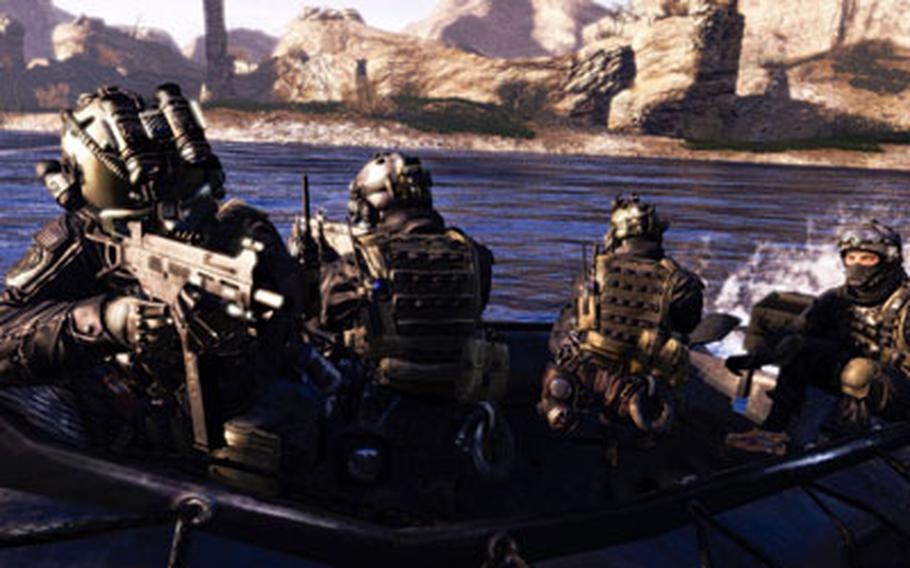 U.S. troops pursue your character along a river in Afghanistan during one of the later missions in the game. ()

How did they achieve such realism? Not with the help of the Defense Department.

When the game&#8217;s developers went to the Los Angeles offices where Marines help media creators attain accuracy in their product, they got sent home.

"In discussions with the game producers, the Marine Corps expressed concern over some of the content, explained our requirement for accuracy and offered points of compromise within the game&#8217;s depictions of the U.S. military," said Staff Sgt. Ethan E. Rocke, a Marine Corps motion picture and TV liaison.

"Ultimately, however, the producers and DOD could not reach a compromise, and they chose to produce the game without DOD support."

To find out how developers fared without the DOD&#8217;s help, I asked a combat veteran what he thought of the game. To maintain his operational security, he will be referred to by his Xbox Live gamertag, CHAIRBORNE40K.

Stripes: Could you give me a brief description of your job and experience in the U.S. military?

CHAIRBORNE40K: I am a staff sergeant in a forward deployed Special Forces unit. I joined the Army as a paratrooper and served with the 82nd Airborne Division before coming over to Special Forces. I&#8217;ve been serving in Special Operations now for four years and have multiple combat deployments to Iraq and the Philippines.

Stripes: What is your opinion of the game in general?

CHAIRBORNE40K: Overall, I really enjoyed this game. A few things I liked were the engaging story and co-op modes. The multiplayer experience is richer and more rewarding. My only real dislike was the short and, at times, muddled story. I expected to get even more enjoyment out of this game than its predecessor, and that was a tough act to follow! It does present a realistic depiction of the modern battlefield, but it&#8217;s still just a game.

Stripes: The developers said they spent time shooting actual weapons to get the recoil, look and sounds of the in-game weapons to be as accurate as possible. How do the weapons feel to you?

CHAIRBORNE40K: The look and sounds of the various NATO and former Soviet weapon systems were spot-on.

Stripes: The media are criticizing makers for the game being unnecessarily violent and offensive. Do you agree with them?

CHAIRBORNE40K: I disagree wholeheartedly. Rating labels are put on video games for a reason; it&#8217;s up to the parents whether or not to expose their child to blood, bodies and foul language. Keep in mind you&#8217;re buying a video game about modern combat with a reputation for realism.

Stripes: Did the in-game jargon seem real to you?

CHAIRBORNE40K: The phrases and acronyms they used were accurate, like "Oscar Mike," "the J-2" and the dreaded "Hooah!" I hate that word. ...

Stripes: I felt the characters didn&#8217;t use any organization when clearing rooms or moving across open areas, which seemed fake. Am I wrong?

CHAIRBORNE40K: This type of game is fast-paced and brings the action in heavy. To be honest, I wasn&#8217;t paying attention to things like movement to contact or wedge formations, etc. In my opinion, it didn&#8217;t really take away from the game. In combat, things can get chaotic.

Stripes: In the game, the characters played as part of a multinational task force and the game began in Afghanistan with Army Rangers training Afghan forces. Did this accurately portray reality?

Stripes: The perk system obviously lets go of reality, but how do you think it adds to the game play?

CHAIRBORNE40K: When you play a video game, you let go of reality. I think it&#8217;s a fun little addition.

Stripes: Do you think they went overboard with the kill streak bonuses? Is it really fair to give a person who can get a 25 kill streak a tactical nuke?

CHAIRBORNE40K: Good question, and no. I have only encountered the nuke once, and for the helos, Predators and AC-130 (aircraft), you do have the option to shoot it down.

Stripes: How would you rate the game on a 1-to-10 scale for entertainment?

Stripes: How would you rate this game on a 1-10 scale for realism?