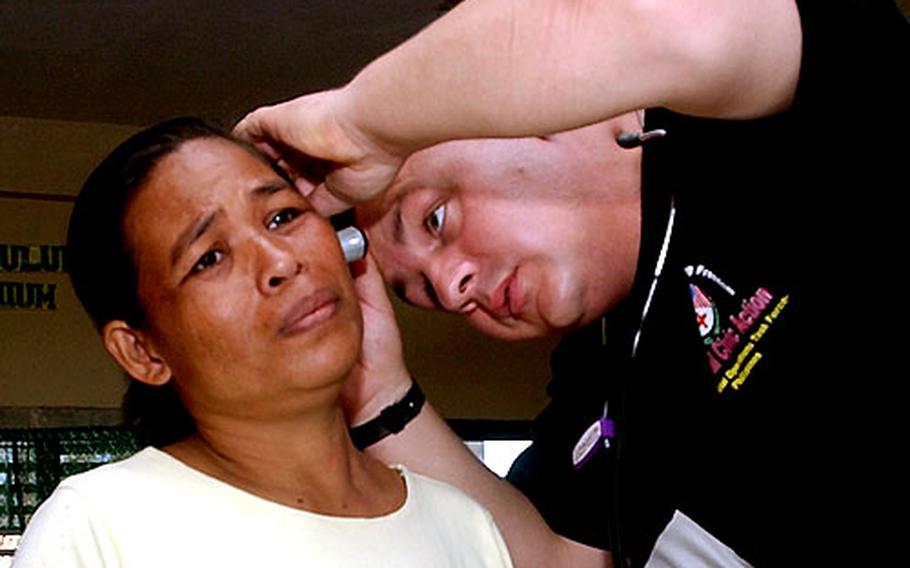 A little boy pauses a moment from playing to smile for the camera while his mother receives medical treatment during the Malagutay Medical Civic Action Project. (Edward G. Martens / U.S. Army) 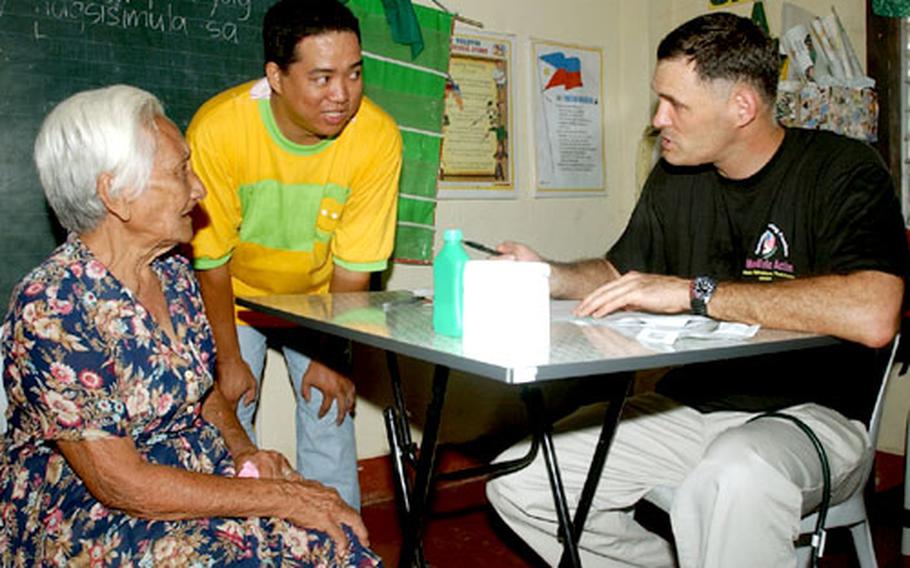 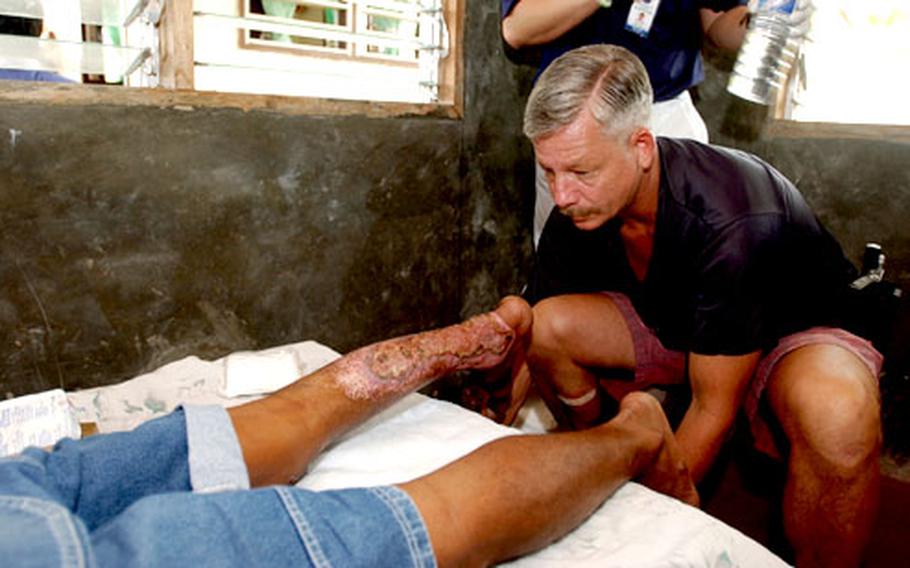 ZAMBOANGA, Philippines &#8212; Protected by heavily armed troops, the Special Forces soldiers dropped into position from helicopters and got to work &#8212; building bridges, roads and schools.

&#8220;We fight the enemy by means other than combat,&#8221; said Sgt. 1st Class Juan Gutierrez, the noncommissioned officer in charge of the current civil-affairs team rebuilding the Philippine island of Basilan.

Civil affairs personnel are the link between the military and the community: they rebuild bridges and roads so troops can pass. And they show people the U.S. military&#8217;s good side through humanitarian assistance.

Civil affairs is part of the Special Operations Command, which includes Rangers and Green Berets. They&#8217;ve rebuilt war-torn communities in Bosnia, Afghanistan and Panama, and now the Philippines.

The group formed in Basilan last spring as part of a sweeping six-month counter-terrorism campaign. They&#8217;ll work until this summer under invitation by the Philippine government.

The projects there have helped restore order on the island and generated support for the United States and the Philippine government.

At the same time, support for terrorists wears away.

Civil-affairs teams assess an area&#8217;s needs, then coordinate with local and international aid groups to find services and supplies. In Basilan, they began with a basic human need: water.

&#8220;A lot of people were saying medical clinics are what they need, but that wasn&#8217;t actually true,&#8221; said Army Maj. Jeff J. D&#8217;Antonio, civil affairs team chief for the Joint U.S. Military Assistance Group in the Philippines.

They needed clean water, he said, so engineers dug wells and later diverted a river to supply an island water facility.

Next came medcaps, or medical civic action projects, a one-day, one-stop clinic for thousands. The team has coordinated 24 since August, and has treated 20,000 people in Basilan and Zamboanga. They handed out hundreds of toothbrushes, and they orchestrated public health education to teach, for example, how to eliminate scabies eggs from clothing and bedding.

Medcap volunteers often had to overcome disinformation spread by supporters of Abu Sayyaf terrorists, said Maj. Bill Autry, who heads the Basilan team. Muslim islanders were told accepting medicine would make them Christian. When one man fell from a tree and died while being treated, Abu Sayyaf backers said the Americans killed him.

&#8220;Through the consistent treatment and with the AFP, we overcame that,&#8221; Autry said, referring to the Armed Forces of the Philippines, who worked closely with the Americans. &#8220;Maybe it was because the people knew we were there to help them,&#8221; D&#8217;Antonio said.

The medcaps gave volunteers experience and introduced locals to the nongovernmental organizations. The groups in the future can work together, so the Army can eventually step aside.

Still more to do

The counter-terrorism training stamped out much of the terrorist threat in Basilan, but the island is still risky. Americans &#8212; including civil affairs teams &#8212; left the island Sept. 15.

Their base in Zamboanga, a helicopter ride away on nearby Mindanao Island, isn&#8217;t much safer. A Green Beret soldier was killed in a terrorist bombing in October off base, and farther east on the island, a series of bombings and kidnappings this year have shocked local communities. One American missionary was killed this month.

With a backdrop of constant terrorist threats, and working remotely from their base, civil affairs still must do their jobs.

The group is responsible for $2 million in construction, including drilling and developing 24 wells, building 16 schools and five clinics on Basilan, said Maj. John Lim, a civil affairs team member.

There are time limits. Under the arrangement with the Philippine government, Lim said, civil affairs projects in the region must be completed and personnel out the door by June 30.

Although they have tangible results, civil affairs team members measure the success in other ways.