Christopher Waiters ‘I counted 17 shooters. Then I was scared’ A Bradley Fighting Vehicle burns after being struck by an improvised explosive devise in Baqoubah, Iraq. Spc. Christopher Waiters makes his first attempt to climb into the burning vehicle to rescue a third soldier trapped in the vehicle after he had treated two other casualties. (Photos courtesy of the U.S. Army)

A Bradley Fighting Vehicle burns after being struck by an improvised explosive devise in Baqoubah, Iraq. Spc. Christopher Waiters makes his first attempt to climb into the burning vehicle to rescue a third soldier trapped in the vehicle after he had treated two other casualties. (Photos courtesy of the U.S. Army) 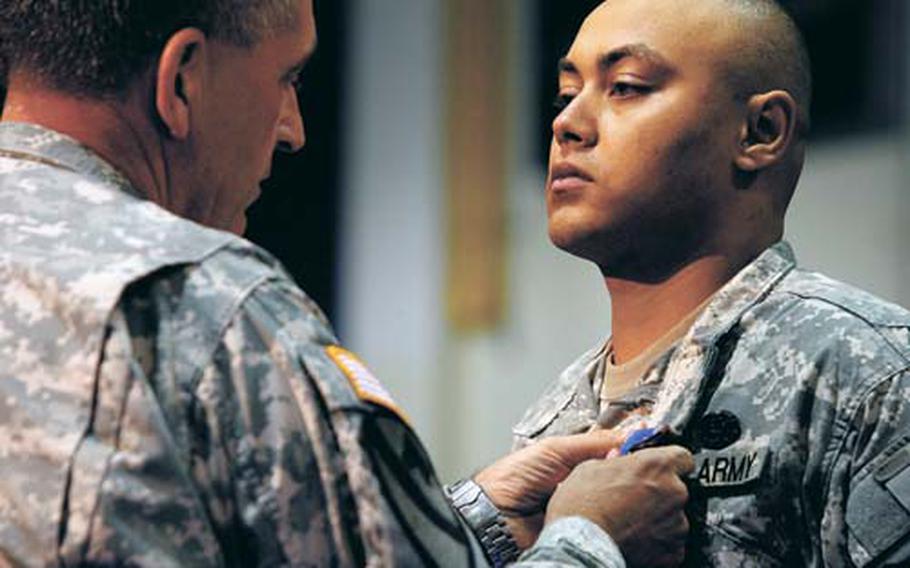 Spc. Christopher Waiters sprinted for about 100 feet under a hail of gunfire before he realized just how much trouble he was in.

Waiters, deployed at the time with the 5th Battalion, 20th Infantry Regiment, had been on a separate patrol in Baqoubah that April 2007 morning when his Stryker crew heard a tremendous explosion about a half-mile away.

That wasn&#8217;t uncommon, the 27-year-old soldier said: Firefights and roadside bombs were an almost daily occurrence in the 10 months Waiters had spent in Iraq on that tour. But he said when they arrived at this attack, it was worse than usual.

"The explosions had been getting bigger and bigger, but this one was huge," he said. "A Bradley was on fire, and we could tell there were personnel trapped inside."

As his vehicle came to a stop, insurgents began firing at it. Waiters and other members of his crew fired back, killing several.

Waiters realized the men in the other vehicle couldn&#8217;t free themselves and would die without help. He told another medic he was headed to the Bradley, and started running as his crew shouted out warnings not to leave the cover of their vehicle.

Bullets kicked up dirt around him as he sprinted toward the Bradley. Waiters said there was almost no cover from shooters overhead, so he just kept as low as he could while running as fast as he could.

At one point, a truck driven by insurgents came barreling at him, only to be stopped and destroyed by his unit&#8217;s gunners. Other snipers aiming for him were picked off by reinforcements arriving at the scene.

"It probably only took a few moments, but it felt like it took forever," he said.

When he arrived at the Bradley, he climbed on top and pried open the driver&#8217;s hatch. That soldier was conscious but disoriented and could not pull himself out of the burning vehicle.

Waiters got him out and safely to another vehicle, then turned back to check the gunner&#8217;s turret. As the gunfire from the insurgents started to die down, the medic heard rounds start exploding inside the Bradley.

The medic pulled the second soldier through the fire and back to the safe vehicle. On his next trip back, the flames were too intense along the top and front to get back in through the turret, so he kicked open the rear escape hatch to get inside.

Waiters found a third soldier there, but he was already dead. It took several tries, but the medic managed to pull his body out, too, making sure that none of the soldiers in the doomed Bradley would be left behind.

A full rescue team arrived on scene minutes later. The two surviving soldiers were flown to a nearby base for emergency medical attention.

Army officials called Waiters&#8217; actions that day "extraordinary heroism" and awarded him the Distinguished Service Cross for risking his own life to save his fellow soldiers. Waiters calls it simply doing his job.

Today, he teaches trauma care at Fort Sam Houston in Texas. The Army has honored Waiters several times for his actions that day, but he said there&#8217;s still one part of the story they haven&#8217;t told even him.