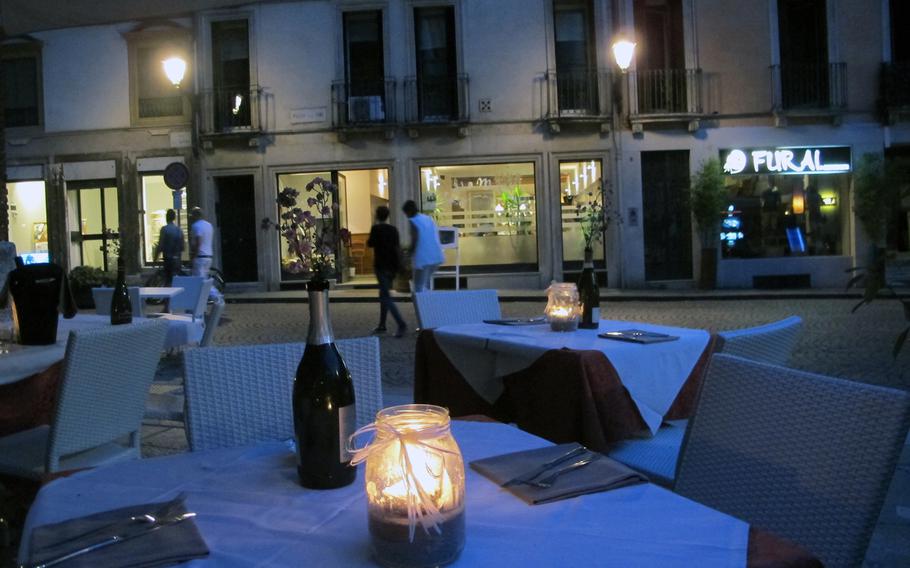 CalaMarè restaurant in Vicenza, Italy, offers outdoor dining on the steps of the Basilica Palladiana. The setting is lovely, but the food on a recent visit disappointed. (Nancy Montgomery/Stars and Stripes)

CalaMarè restaurant in Vicenza, Italy, offers outdoor dining on the steps of the Basilica Palladiana. The setting is lovely, but the food on a recent visit disappointed. (Nancy Montgomery/Stars and Stripes) 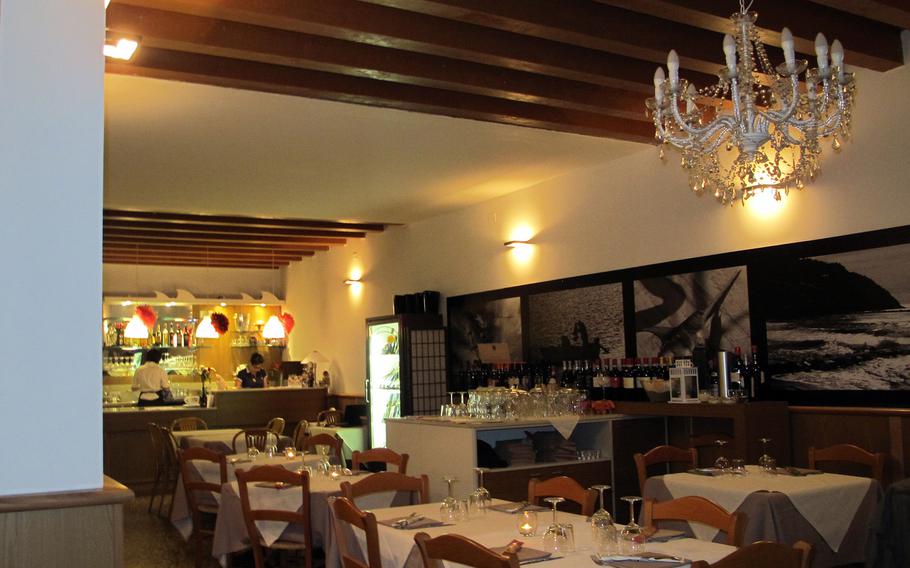 CalaMarè restaurant in Vicenza, Italy, on a recent week day evening was not especially busy - perhaps because of the underwhelming cuisine. (Nancy Montgomery/Stars and Stripes) CalaMarè restaurant in Vicenza, Italy, presents diners with a free and tasty bruschetta on wonderfully chewy, dense bread. That's one of the positives in a very disappointing dining experience. (Nancy Montgomery/Stars and Stripes) 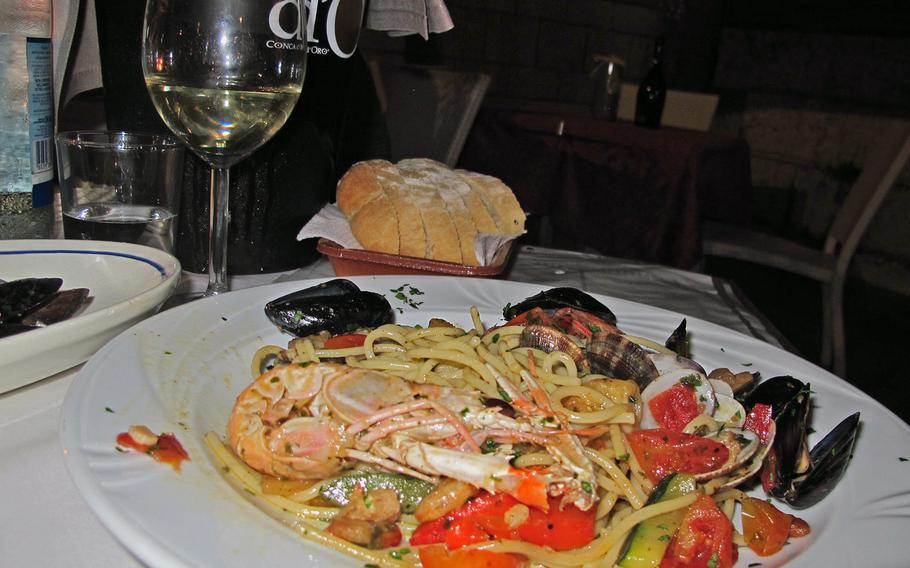 The seafood spaghetti looked better than it tasted at CalaMarè restaurant in Vicenza, Italy. The shellfish were sweet but the sauce was not. (Nancy Montgomery/Stars and Stripes) 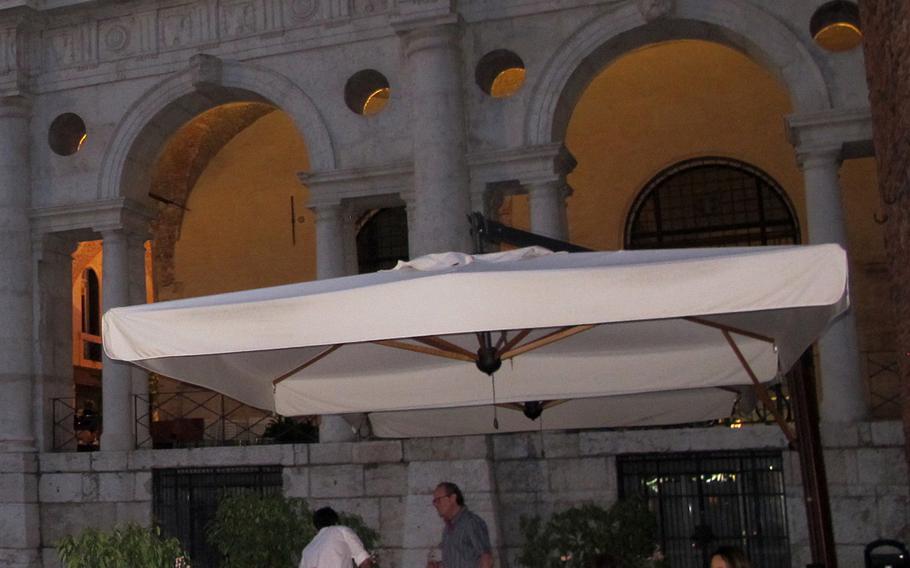 In Italy, it is sometimes said, you can’t get a bad meal.

I came not to bury CalaMarè, a fish restaurant featuring Ligurian style pasta and seafood — among my favorite cuisine in the world — that opened about a year ago in the heart of downtown Vicenza. But I can’t praise it, either. A recent meal there was pretty much a tragedy.

But let’s start with the positives!

The setting is nice, sharing space with a number of other restaurants on the backside of the Basilica Palladiana, Vicenza’s great, white-marble landmark. We sat at a candle-lit table outside, and live music from the piazza on the front side of the basilica pleasantly wafted on the warm evening air.

Service was quick, and soon enough we had a free plate of bruschetta put before us, served by a waiter who may have been speaking an Italian dialect. Or Romulan. In short, we couldn’t understand him, nor he us.

The bruschetta was simple and good, just diced tomatoes and olive oil on dense, chewy bread. I started to think that my initial skepticism about the place — based on its kitschy décor, a big fake lobster and buoy in the window, and relatively modest prices — was misplaced.

And I can faithfully report that the mixed salad was lovely, fresh, crisp, and indeed a mix — of greens, carrots and tomatoes.

But it was so downhill from there. The spaghetti with mussels and clams — 12 euros — swam in a sauce so salty that I, a salt devotee, couldn’t eat it. I ended up just picking out the shellfish. Both the mussels, which predominated (they cost less) and clams were unexpectedly, wonderfully sweet. They did not, however, make a meal.

My companion soldiered through his 15-euro seafood spaghetti. This dish’s sauce also was bad, although in a different way from mine. His wasn’t too salty; it just didn’t taste good, for reasons we couldn’t quite identify.

I held out hope for our second course, mixed fried seafood and vegetables. I love the mixed fried seafood in Italy, so irresistibly crispy. I’ve frequently said that anything deep-fried, be it fish, chicken, doughnut, broccoli, Twinkie or even, probably, little dog turds, will taste terrific.

CalaMarè proved me wrong. First, the dish consisted only of fried squid, some zucchini and perhaps some peppers. No shrimp, no octopus, nary a scallop. Not really mixed at all. Second, and even worse, it was limp and soggy — basically inedible.

Starved for food, I drank another glass of uninspired white wine. By the time I used the restroom and saw there was no toilet tissue, I was hardly surprised.