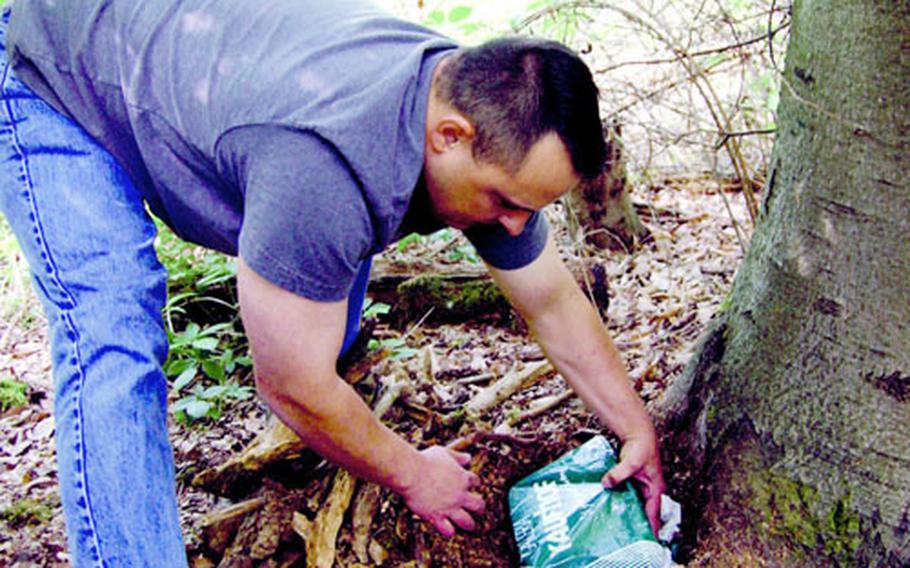 Geocaching, with its combination of geography, problem solving and the use of a Global Positioning System in search of hidden treasure, is sweeping the world.

Since the launch of the geocaching.com Web site in May 2000, caches are located in all 50 states. According to the Web site, there now are more than 105,000 caches active in 208 countries.

Air Force Tech Sgt. Marty Warg, a logistician stationed in Darmstadt, Germany, has been addicted to geocaching since December 2002 and even geocaches on vacation.

According to geocaching.com, geocaching in its present form has been in existence for about four years.

The increase of satellite accuracy for GPS by the U.S. government in 2000 has helped to make the game more of a reality.

Before 2000, GPS accuracy was approximately 300 feet. Today, the accuracy of a GPS can come as close as 15 feet.

The Web site is updated daily by people around the globe, who post coordinates to the caches they&#8217;ve hidden. To find caches in your part of the world, simply log on to the site and enter either your zip code or country. Logging on to the site is free.

Warg said he also visits www.geocaching.de, a site based in Germany, which lists only German caches.

Once a person has found an interesting cache, he or she can print out its coordinates, a small map of the area, difficulty and terrain ratings, clues for finding the cache and any other helpful tips to find the site.

The difficulty and terrain of a cache are rated from one to five stars, with one being the easiest to navigate and five being the most difficult. In other words, the location may be so remote that a pair of good hiking boots won&#8217;t cut it, like on Germany&#8217;s tallest peak, the Zugspitz, where caches are sometimes hidden, Warg said.

The Bernd Rosemeyer cache is located at a rest area just off Autobahn 5 near the Gr&#228;fenhausen autobahn gas station. Rosemeyer, a daredevil in the early days of auto racing, died in 1938 in the vicinity of the rest area. A memorial there commemorates his life.

Those who hide the caches often are avid geocachers themselves. There are, however, a few ground rules for both the cache keeper and the finder.

Warg, who is preparing to move to Minot Air Force Base, N.D., looks forward to spreading the game elsewhere. The region&#8217;s long winters don&#8217;t seem to faze him.

&#8220;The winter weather helps, anyway, because if someone is looking for the same cache as you, you just might see their footprints in the snow.&#8221;

There currently are around 60 caches in a 100-mile radius of the base.