The Burger Bar in Nuremberg, Germany, has a menu that consists of burgers, french fries and not a whole lot else. This has led to them creating some of the best burgers in Bavaria. (Michael S. Darnell/Stars and Stripes)

The Burger Bar in Nuremberg, Germany, has a menu that consists of burgers, french fries and not a whole lot else. This has led to them creating some of the best burgers in Bavaria. (Michael S. Darnell/Stars and Stripes) 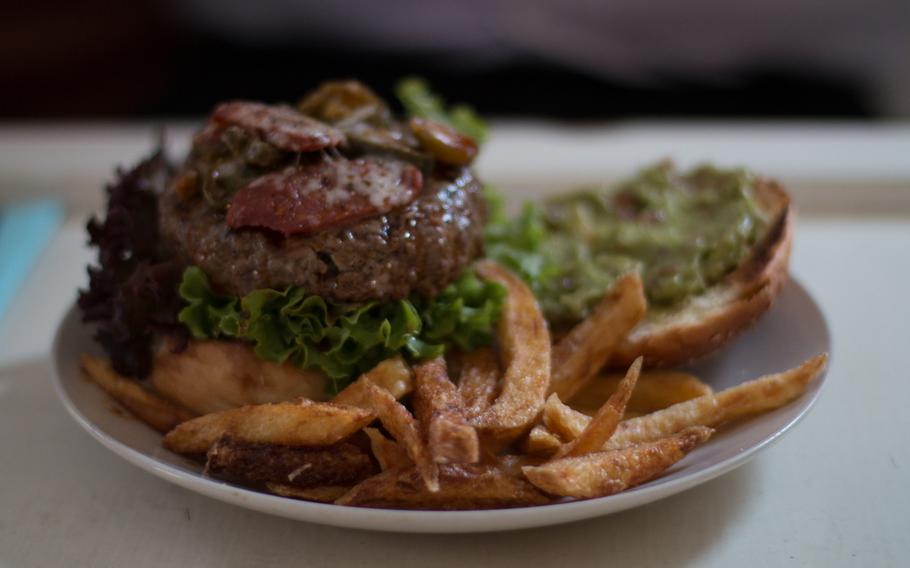 Though the Burger Bar in Nuremberg, Germany is a simple restaurant, the owners and cooks have included some twists on the classic burger, including this spicy guacamole version. (Michael S. Darnell/Stars and Stripes) This lone sign is the only marking on the building where you'll find one of the better burgers in Bavaria. (Michael S. Darnell/Stars and Stripes)

An American living in Germany soon finds that this innocuous question has an unfortunate number of answers. While the incredible diversity of cuisines to be found across the country is one of the benefits to living here, the simple American hamburger is harder to come by than one might think.

Sure, several places operate under the assumption that they’re serving American-style hamburgers, and a few even get fairly close. But more often than not, they miss the mark. I have been served meatloaf on white bread, open-faced steak sandwiches and even simply reheated frozen beef patties — all advertised as hamburgers — in my search for a decent burger joint.

Thanks to the simply-named Burger Bar in Nuremberg, my search might finally be over.

This small diner, situated some distance from the touristy center of the city, is run by folks who really understand what makes a great burger. They have seemingly reached that understanding by stripping all pretense from the burger-making process.

It begins with the menu, which offers just a handful of hamburger styles. Each burger has its own twist, like the pesto burger or the jalapeno-laden spicy burger, but there are no chicken or pasta dishes anywhere on the menu.

There are a couple of vegetarian-friendly options, but other than that concession to differing diets, the Burger Bar offers hamburgers, french fries, a handful of dessert options and that’s about it. That singular focus has enabled the restaurant to create some really tasty hamburgers.

The meat is the best example of how the focused menu has led to better quality food. The owners and cooks use all fresh ground beef and pork, which it seems should be standard in the burger industry, but really isn’t. Simply by using fresh beef — and fresh produce for the toppings — the Burger Bar transcends most similar establishments.

The burgers are not laden with any odd ingredients — no cheese cubes, breading or soggy vegetables. It’s just meat. Again, this might seem like something that should be standard, but after trying what was essentially a veggie-packed meatloaf masquerading as a burger, this addition by omission is greatly appreciated.

The Burger Bar’s fresh-and-simple philosophy extends to the side dishes and desserts. The fries are cut from real potatoes and served either plain or with a dusting of smoked spice. The desserts are also made in-house and rotate with the availability of seasonal fruits.

The simple, back-to-basics nature of the Burger Bar’s food selection is mirrored in its decor, and the wait staff has been exceptional on every visit. And, the burgers I have had there were all cooked exactly the way I ordered them. So, you’ll begin to see why this has quickly become my favorite burger place.

Costs: Burgers change price depending on size, starting at 6 euros and ending at about 13 euros.