Bryan K. Noble ‘You can’t bow out because you’re hurt’ 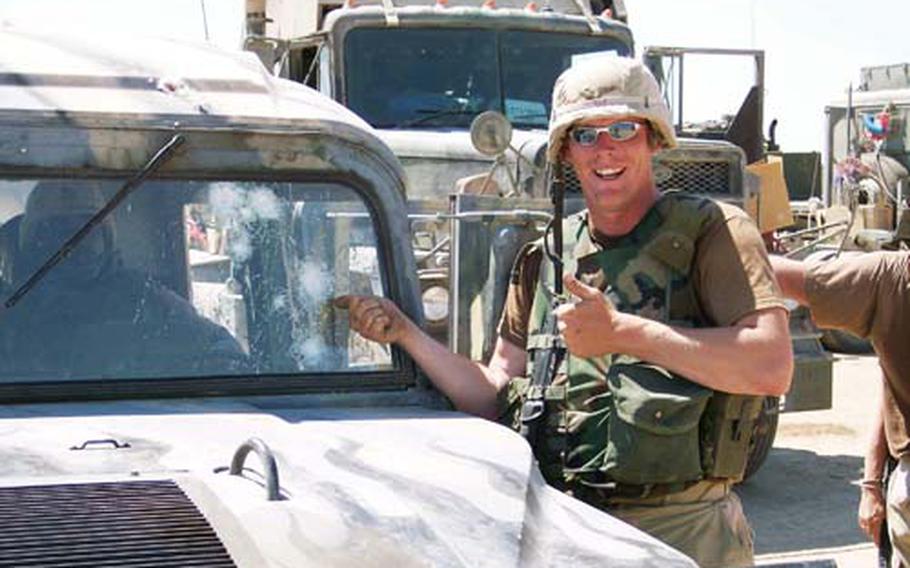 At Baghdad International Airport in Iraq in April 2004, then-Spc. Bryan K. Noble of the 1487th Transportation Company, Ohio Army National Guard, points to the windshield of his Humvee, which earlier that day was hit by seven AK-47 rounds fired by an insurgent sniper. (Courtesy of Sgt. Bryan K. Noble)

The intel they got before their convoy rolled out was to watch for roadside soccer games, because the games could hide kids who were calling ahead to insurgents that a convoy was on the move, Sgt. Bryan K. Noble remembers.

And by the time it was all over that sunny afternoon of April 7, 2004, Noble would know what it is to be in a firefight so intense that he&#8217;d be down to his last two magazines of ammunition.

He was driving the lead Humvee of a three-vehicle security detail assigned to escort a supply convoy of about 50 trucks along the hundreds of miles from Camp Navistar in Kuwait to Camp Anaconda, about 40 miles north of Baghdad.

Noble&#8217;s rank at the time was specialist, and he served as a driver with the 1487th Transportation Company, part of the Ohio Army National Guard. Now 37, he works as a truck driver and lives in Union, Ohio.

As the convoy ran north along six-lane Route Tampa, not far from Baghdad International Airport, they spotted kids on an overpass up ahead. The kids ran down toward the game.

Noble jerked to a stop about 100 yards or more north of the overpass. McCormick turned his .50-caliber machine gun toward the crowd but aimed well above their heads. Noble and the rest of the crew &#8212; Spc. Brandon Lawson and Spc. Ralph Blue &#8212; got out and scanned the crowd.

With the entire convoy halted, the second escort truck pulled up and took over watching the crowd, freeing up Noble&#8217;s Humvee to resume scouting the stretch of road ahead.

Then, a mortar round crashed into the median about 100 yards ahead of Noble&#8217;s Humvee, followed by two more that hit the roadway.

McCormick manned the turret, while the others in the Humvee bolted out and started shooting back.

Mortar and small-arms fire was coming from an overpass about 300 yards north. Blue and Lawson returned fire, and three men went down.

From their left, the Humvee crew was taking small-arms fire from an orchard that faced the highway&#8217;s southbound lanes.

And in the next moment, they saw racing down those southbound lanes two white vehicles, a car and a truck. Men in the vehicles opened fire drive-by style.

The Humvee crew was caught in a well-synchronized L-shaped ambush.

AK-47 rounds socked into the Humvee, which was not an up-armored version.

McCormick was no longer in the turret.

Noble opened the Humvee&#8217;s rear hatch and there, very bloody but cursing and full of fight, McCormick was struggling to open a can of .50-caliber ammunition and get it to the turret. Bullet fragments had cut his left hand. Noble helped him, then turned to re-engage the insurgents.

Bullets were striking the ground next to the soldiers.

That&#8217;s when Noble spotted a bearded, heavy-set, middle-aged man in a white, gown-like garment, standing in an open doorway and firing an automatic rifle from his hip.

An insurgent&#8217;s bullet hit Lawson behind his right thigh, but he kept fighting.

Gunfire continued from the orchard and Noble dashed to the median railing. He began firing grenades, round after round, into the orchard.

Noble kept it up until, gradually, the insurgent fire tapered off.

A quick-reaction force arrived, and the fight &#8212; for that day &#8212; was over, about a half-hour after it began. They were later told that about a dozen insurgents had been killed. They counted about eight bullet holes in the Humvee. Three tires were shot out.

Over the next three days, they were in eight or nine more firefights, and in one of them, Noble was wounded in the leg by a bullet fragment and in the face by shattered glass.

Noble&#8217;s Bronze Star citation for the April 7 engagement credits him with showing &#8220;great courage and composure under fire while engaging multiple enemy targets&#8221; and &#8220;unparalleled bravery in the face of enemy fire.&#8221;

Once they got to Baghdad&#8217;s airport, Noble remembered something his drill sergeant told him in basic training after Noble had injured muscles in his chest.