Brenda Curfman ‘Ammunition just popping off all over’ 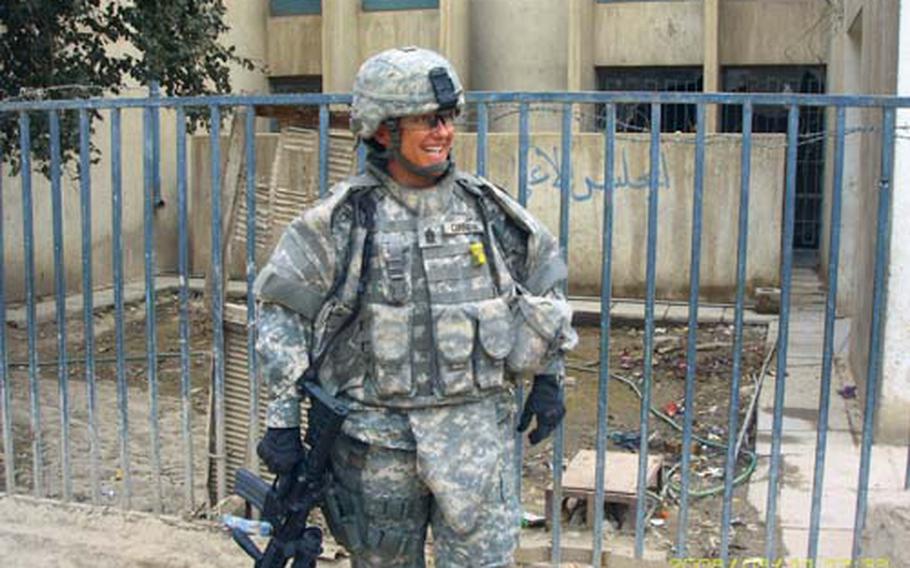 Command Sgt. Maj. Brenda Curfman received an Army Commendation Medal with valor for her efforts on Dec. 17, 2007, near Baghdad, when the lead truck in her convoy was struck by an EFP. (Photo courtesy of Brenda Curfman)

&#8220;Sergeant major, please stay in the truck.&#8221; That was the last thing Command Sgt. Maj. Brenda Curfman heard as she threw off her communications headset to get out of her Humvee.

The lead Humvee in her four-vehicle convoy had just been hit by an explosively formed penetrator in east Baghdad. Soldiers were wounded and needed medical care. Her high rank did not stop Curfman from rushing to help.

The 95th Military Police Battalion out of Mannheim, Germany, was two months into its 15-month deployment, performing transition-team work with Iraqi police. As the battalion command sergeant major, Curfman often traveled from Forward Operating Base Rustamiyah to see her soldiers at Iraqi police stations around eastern Baghdad.

Around noon on Dec. 17, 2007, Curfman and the soldiers accompanying her were driving on a four-lane highway to visit another police station when the EFP blew out the whole right and backside of the convoy&#8217;s lead truck. The disabled truck slowed and drifted to the right side of the road. The right front door of the Humvee opened. The truck commander fell out, bleeding badly.

Curfman&#8217;s Humvee pulled in front, but then she told her driver to back up so they could get to the wounded soldiers. Another vehicle drove up to provide forward security.

A medic in the convoy moved up and began treating the wounded truck commander. Then-Spc. Jesse Granberg, the driver of the blasted vehicle, had wounds to the back of his neck and would later receive a Bronze Star with &#8220;V&#8221; device for his actions that day. Granberg now serves as a sergeant.

However, the gunner, Spc. Bryan Wagner, was blown down into the truck and suffered a severe leg wound.

In the meantime, other soldiers hooked up the disabled truck so it could be towed.

Medical evacuation helicopters could not be brought in to pick up the wounded, so the convoy was directed to nearby FOB Shield where helicopters would be waiting to transport the wounded.

Knowing that Wagner needed constant medical attention, Curfman opted to stay in the damaged Humvee while it was towed, serving as truck commander. The right front door of the Humvee would not shut because of blast damage. Curfman worked to hold the up-armored door closed to protect herself against potential attack while still treating the wounded gunner.

About 10 minutes into being towed, the battered truck became engulfed in flames. The truck was loaded with live ammunition, and its radio was dead.

Curfman tried to beat out the flames and toss out anything that was on fire, but rounds started &#8220;cooking off&#8221; inside the truck.

&#8220;The young specialist that was driving the truck at the time and I, we knew that we had to stop that convoy, get out of the truck and get that wounded soldier out of the truck or none of us were going to make it,&#8221; she said. &#8220;I mean literally there was ammunition just popping off all over. We had grenades in there.&#8221;

The soldiers in the truck were inhaling smoke from the fire.

Without a radio, there was no traditional way to relay the need to stop. Curfman improvised. She managed to climb out onto the door frame and get the attention of the Humvee to the rear.

Wagner was moved to an undamaged Humvee, and Curfman stayed with him, continuing to render aid. Another squad in the task force arrived to assist the convoy. The group made it to FOB Shield where Wagner was medically evacuated. All the soldiers wounded in the blast survived, but Wagner lost his right leg as a result of the explosion.

For her efforts that day, Curfman received an Army Commendation Medal with &#8220;V&#8221; device.