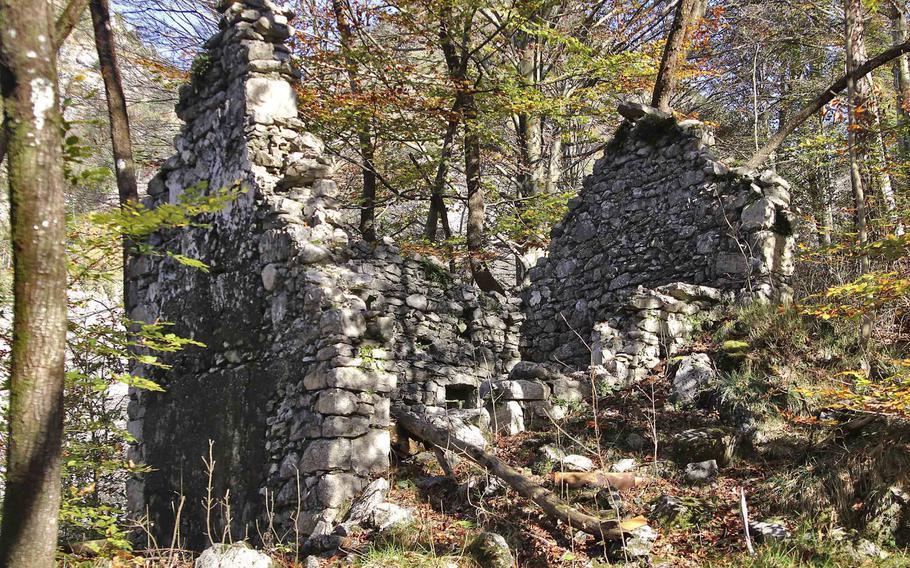 Buy Photo
Ruins of an abandoned house in the Italian Alps, along a trail that leads to the ghost towns of Palcoda and Tamar, in Pordenone province, Italy. (Norman Llamas/Stars and Stripes)

Buy Photo
Ruins of an abandoned house in the Italian Alps, along a trail that leads to the ghost towns of Palcoda and Tamar, in Pordenone province, Italy. (Norman Llamas/Stars and Stripes) 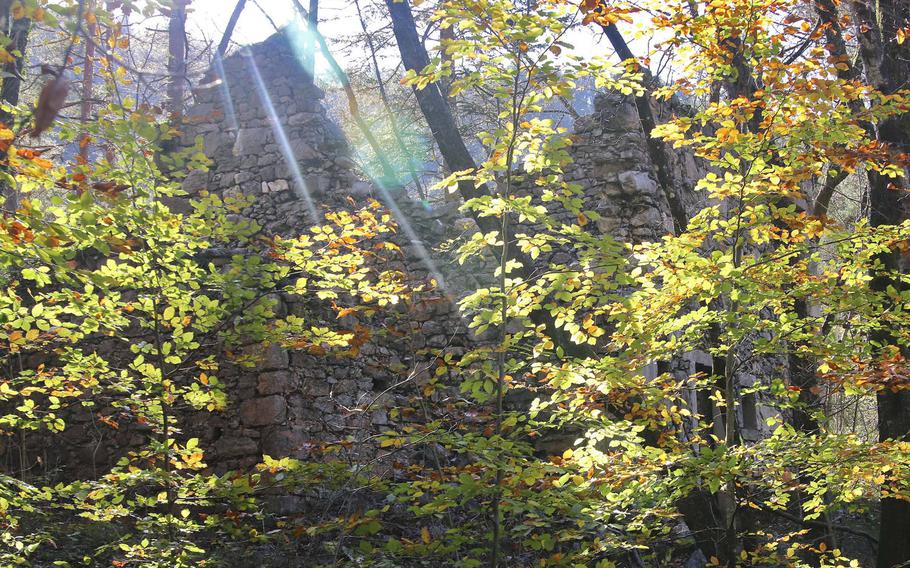 Buy Photo
Ruins of an abandoned house remain along the trail leading up to the ghost towns of Palcoda and Tamarl, Italy. Palcoda was established around 1400 and remained inhabited for over 500 years. (Norman Llamas/Stars and Stripes) 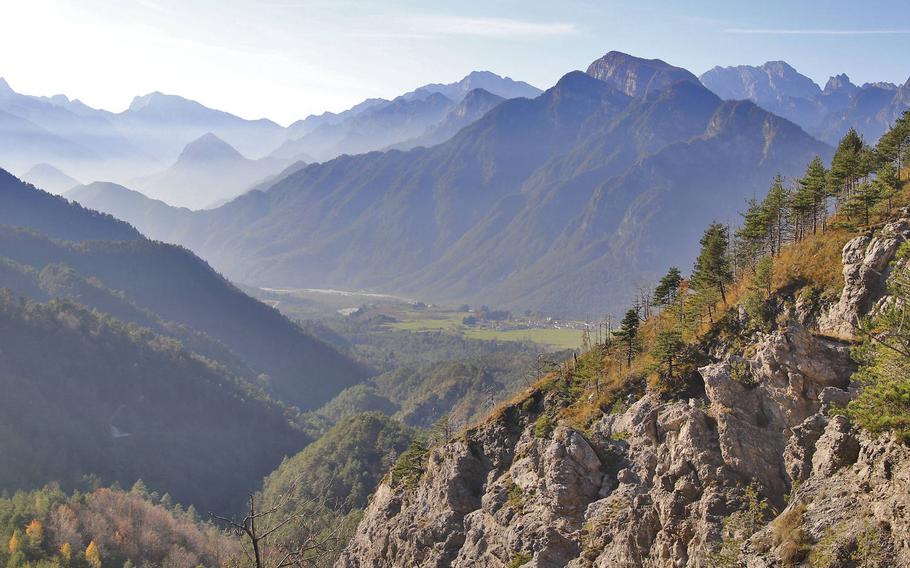 Buy Photo
Breathtaking views from atop a mountain peak in the Italian Alps, along the trail leading to the abandoned towns of Palcoda and Tamar in Pordenone province, Italy. The towns are only accessible by foot, but hikers can park at the base of the mountain range in the town of Tramonti di Sotto, which is about a 45-minute drive from Aviano Air Base. (Norman Llamas/Stars and Stripes) 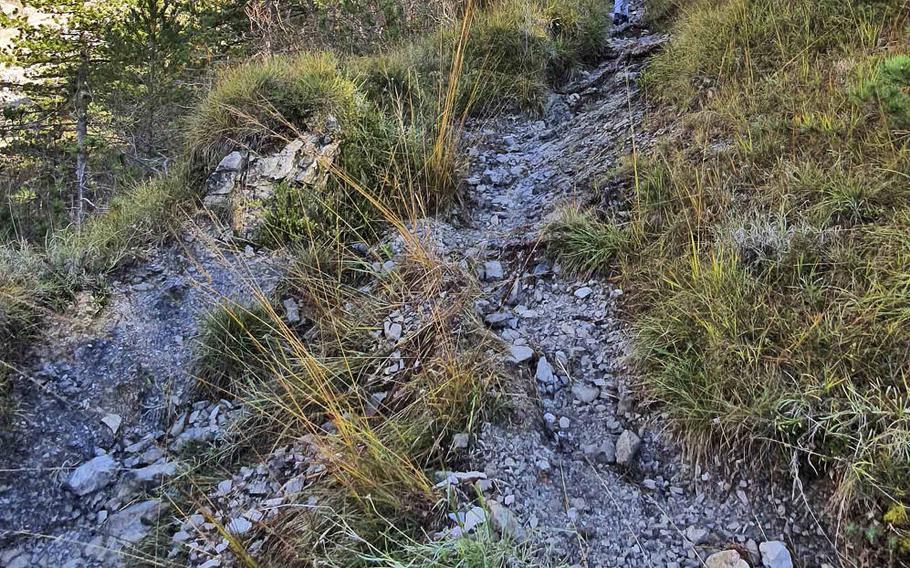 Buy Photo
A trail leading to the abandoned town of Palcoda in Pordenone province, Italy. The town is only accessible by foot, which is easiest after driving to Tramonti di Sotto, about 26 miles northeast of Aviano Air Base. (Norman Llamas/Stars and Stripes)

Our Halloween hike to a fabled ghost town in the Italian Alps did turn out to be scary, but less in a haunted sense and more in a “how are my injured wife and 5-year-old going to get down a steep mountain” sort of way.

The way to Palcoda, a town last inhabited in 1923, isn’t a simple jaunt. But it does offer some of the most breathtaking mountain scenery I’ve ever seen.

There’s no way to drive there, since there isn’t much demand for roads to a ghost town. We drove to Tramonti di Sotto, which is less than an hour from Aviano Air Base, and parked our car the base of the Alps. We arrived at noon, but if the days are short and you’re not a world-class hiking crew, arrive earlier.

At first, the trail seemed well-established and easy. The reds and yellows of fall foliage accented the mountains, their peaks framing expansive vistas under a blue sky. We were feeling good about what our information said was a roughly 90-minute hike to Palcoda.

We later came to a fork in the road, where wooden signs with times and distances point to different trails.

We chose the route to Palcoda, which several websites say dates back to 1400, when passing shepherds ended up settling in the area. The village’s economy blossomed in the 17th century thanks to agriculture, livestock and the production of straw hats that were traded all over Europe.

The town never grew beyond 150 inhabitants and was abandoned about 100 years ago, in the midst of an economic crisis that had engulfed the Friulian territories.

Nature has since reclaimed the town and captured the interest of tourists. The only building that’s been kept up over the years is the church, which was originally erected in 1780 and restored in 2011. There are other, similar towns dotting the countryside, which is abundant with waterfalls and other sights.

Soon after setting off on the Palcoda trail, the terrain changed. It was very steep and rocky, and with a child in our group, we trekked slowly and carefully.

We came up to a river and found another American family on a hike. After a quick chat, we learned that Palcoda was much further than we thought.

Not ones to be discouraged, we marched on. About 45 minutes into our trek we came upon some ruins. We looked into them a bit closer and took some family photos while catching our breaths.

We returned to the path, which got steeper and rockier. After trekking for 2 1/2 hours, we reached one of the highest peaks on the trail. From there, we witnessed priceless views of all the surrounding Alpine mountains and the towns below.

We could also see the ghost town out in the distance. At this point, despite our curiousness and need for adventure, we knew for sure that we weren’t going to make it all the way to Palcoda and then back to our car before it got dark. We made the hard decision to turn back from there.

The trail, full of loose rocks and decaying vegetation, was even more challenging on the way down. My wife stepped on a large, damp rock and her left foot slipped. Her knee slammed hard into a rock when she went down, her right ankle twisting in the process.

After a few moments of collective panic, thinking that she might not be able to walk back down the mountain, she mustered enough will to slowly make her way back to the car. It took over a week for her to recover from that slip.

Our takeaway from that episode is to watch every step and wear the right shoes, along with following other tried and true hiking recommendations: be aware of your surroundings, have a plan, pack supplies and stick to the path, among others.

Despite my wife’s injury, we’re all so thankful to have such amazing locations nearby, where we can escape during this long pandemic. Small scrapes and bruises won’t keep us from going back out to the mountains and exploring their wonders.

DIRECTIONS: Putting Aviano Air Base to Palcoda into Google Maps will show you the full route, though you will have to park in Tramonti di Sotto where the road ends. From there, follow the posted signs on the hiking trail to the ghost towns.

FOOD: There are no shops on the trails, so pack your own.