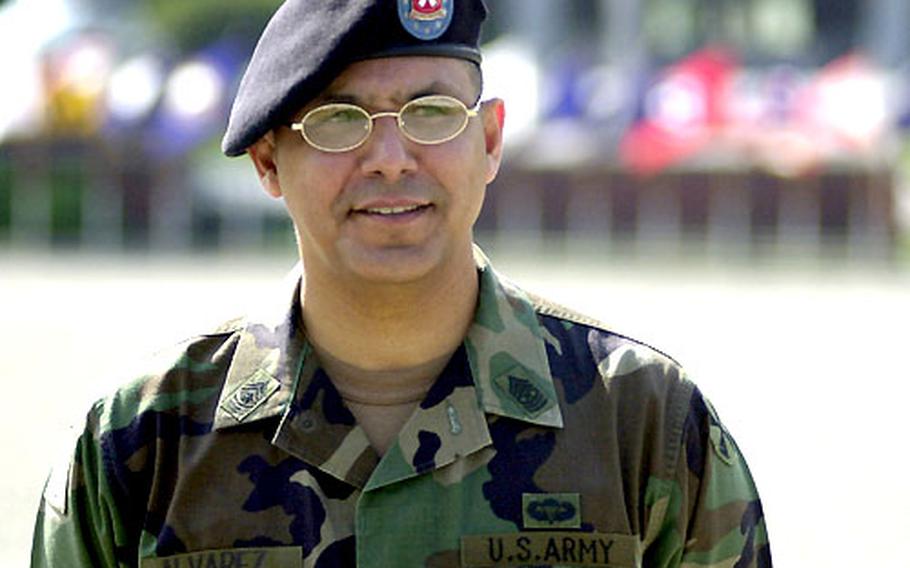 Buy Photo
Sgt. Major Carlos Alvarez says every soldier, regardless of race, should have a sense of being part of a team. (Stars and Stripes)

The passions about the war in Vietnam had boiled over, leaving a fractured military culture of divisiveness and mistrust. Alvarez, a native of Salinas, Puerto Rico, volunteered for the Army because he figured he would be drafted anyway. After a two-year tour as an infantryman, he returned home, went to college and got married.

Six years later, he decided to join the military again, this time in the personnel field.

Now, 23 years later, Alvarez is the top enlisted leader in the 8th Army Equal Opportunity office. With the period between Sept. 15 and Oct. 15 designated Hispanic Heritage Month, he is well aware of his role as an Army leader, in more ways than one.

&#8220;The EO office guards the process, we make sure the soldiers are trained properly. And if they have a complaint, we make sure that it is taken care of by the regulations.&#8221;

In 2001, Hispanic-Americans made up 10 percent of the enlisted U.S. military force, according to Defense Department figures. And though advocacy groups say Hispanics have made great strides in the military in recent years, they still point to statistics they say reveal a discrepancy in representation.

Hispanics make up just 3.8 percent of the entire active duty officer corps, those figures show. And, Hispanics make up 20 percent of the enlisted personnel who most directly handle weapons in &#8220;infantry, gun crews and seamanship&#8221; jobs. In contrast, according to a study of DOD figures by the non-profit Pew Hispanic Center, Hispanics are underrepresented in technical jobs.

Hispanics also were over-represented in combat casualties, some advocacy groups say. In Vietnam, Hispanics made up 25 percent of the casualties, while being just five percent of the U.S. population at the time. Figures compiled this summer indicate the percentage of casualties in Iraq is about the same.

Anecdotally, soldiers need only turn on the news for a daily reminder of Hispanics in military leadership positions. The top American military man in Iraq, for example, is Lt. Gen Ricardo Sanchez.