Detail of ''Death of Prince Jozef Poniatowski in the Battle of Leipzig, 1816'' by the French painter Horace Vernet. This work is one of 250 currently on exhibit in Bundeskunsthalle in Bonn. (Will Morris/Stars and Stripes)

Detail of ''Death of Prince Jozef Poniatowski in the Battle of Leipzig, 1816'' by the French painter Horace Vernet. This work is one of 250 currently on exhibit in Bundeskunsthalle in Bonn. (Will Morris/Stars and Stripes) 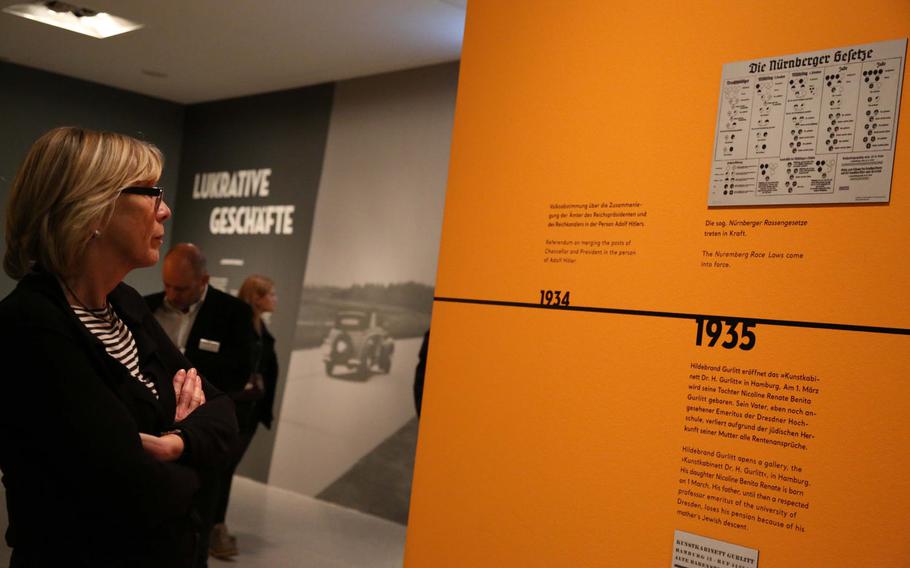 A visitor to an exhibit of paintings from the collection of Hildebrand Gurlitt in Bonn, Germany, reads about the Nuremberg Laws, which classified Germany's population by race. Much of Gurlitt's collection was made up of works stolen from Jews or sold by them under duress. (Will Morris/Stars and Stripes) ''City'' 1916 by German artist George Grosz. Considered part of the dada and new objectivity movements, this work is one of many in the Gurlitt exhibit whose provenance is still being researched. (Will Morris/Stars and Stripes) 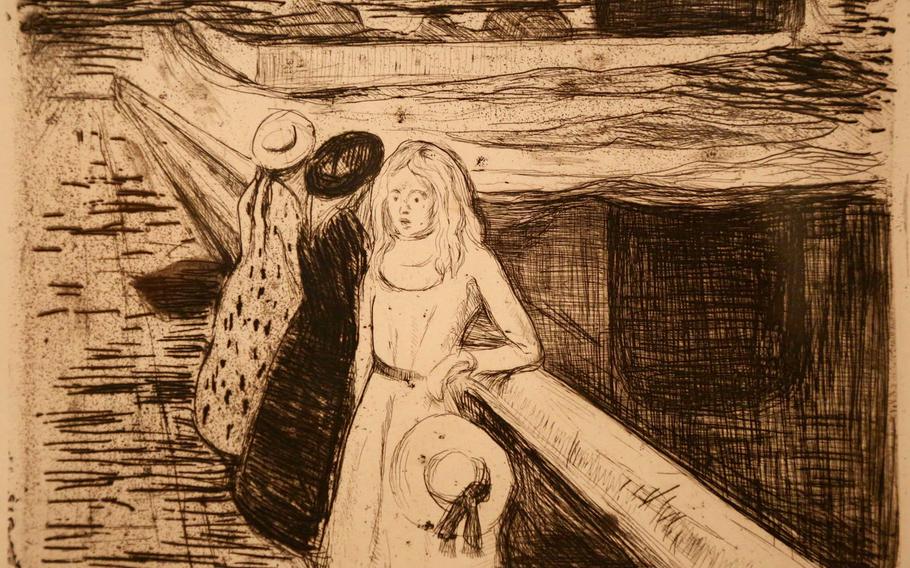 Study for ''The Girls on the Bridge'' by Edvard Munch. The Norwegian painter is best-known for his painting ''The Scream,'' set on the same bridge as this work. (Will Morris/Stars and Stripes) A visitor to an exhibit at the Bundeskunsthalle in Bonn, Germany, reads about the work of German expressionist Otto Dix. As the Nazis beat the drums of race and nationalism in prewar Germany, artists like Dix tried to remind Germans about the realities of war. (Will Morris/Stars and Stripes) The exhibit "Gurlitt: Status Report, Nazi Art Theft and Its Consequences" runs at the Bundeskunsthalle in Bonn, Germany, until March 11, 2018. (Will Morris/Stars and Stripes)

Much has been written about Hildebrand Gurlitt, an art dealer and collector who served the Third Reich: his life, his role in trading art for the Nazis and the irony of his part-Jewish ancestry. But one thing is certain: He took advantage of Nazi rule to amass a collection of thousands of artworks that is today valued at more than a billion dollars.

“Gurlitt: Status Report, Nazi Art Theft and Its Consequences,” which runs through March 11 at the Bundeskunsthalle in Bonn, Germany, contains 250 works from Gurlitt’s cache, many of which were stolen from Jews or bought at nominal prices from those fleeing prewar Europe.

Gurlitt’s son, Cornelius Gurlitt, inherited his father’s collection in 1961 and sold pieces of it little by little, living off the proceeds for most of his adult life. Part of the collection was seized in 2012 during a tax evasion investigation, and another large holding was seized from his house in Salzburg, Austria. He died in 2014 and left the entire collection to the Kunstmuseum Bern Foundation.

The first piece in the Bonn exhibit is an unnamed portrait of a young woman by noted French artist Thomas Couture. It was owned by Georges Mandel, a French politician and ethnic Jew. The painting was looted from his home most likely in August 1940, and Mandel was shot four years later in the woods outside Paris by Nazi collaborators.

With Couture as an introduction, the exhibit establishes the violent story behind the Gurlitt collection. Explanations accompany each work, giving a history of its ownership up until Gurlitt took possession of it.

“Status Report” is organized chronologically. It starts with Gurlitt’s admirable efforts to promote the work of German expressionists and the avant-garde in the 1920s; it ends with his activities after World War II, including his efforts to deceive Americans and the German government about the origin of much of his collection.

Containing works from numerous periods and movements, it is clearly the collection of an art dealer who served clients of diverse tastes. Claude Monet, Auguste Rodin, Edvard Munch, Otto Dix and Edgar Dega all make appearances.

The running history of the anti-Jewish laws that accompanies the artworks is striking. I was left with the impression that the Nazis considered art mainly as commodity (something to be bought and sold) or as an expression of political will (something to be promoted or banned). Works that expressed nationalistic or racial ideas were promoted by the government; others that questioned the Nazi’s push to war, such as those of German expressionist Dix, were hidden from the public eye.

One of the ironies of Gurlitt’s collection, and that of the exhibit itself, is that many of the artworks probably would not have survived Nazi rule had he not painstakingly collected them.

Address: Bundeskunsthalle, Friedrich-Ebert-Allee 4, 53113 Bonn, Germany. From Kaiserslautern, head north on the A61; continue north on the A565. Once in Bonn, take the exit to Reuterstrase; continue south on Highway 9. The museum will be on the right side.