Bernd's Blockhaus in Weilerbach, Germany, is a treat for kids and adults 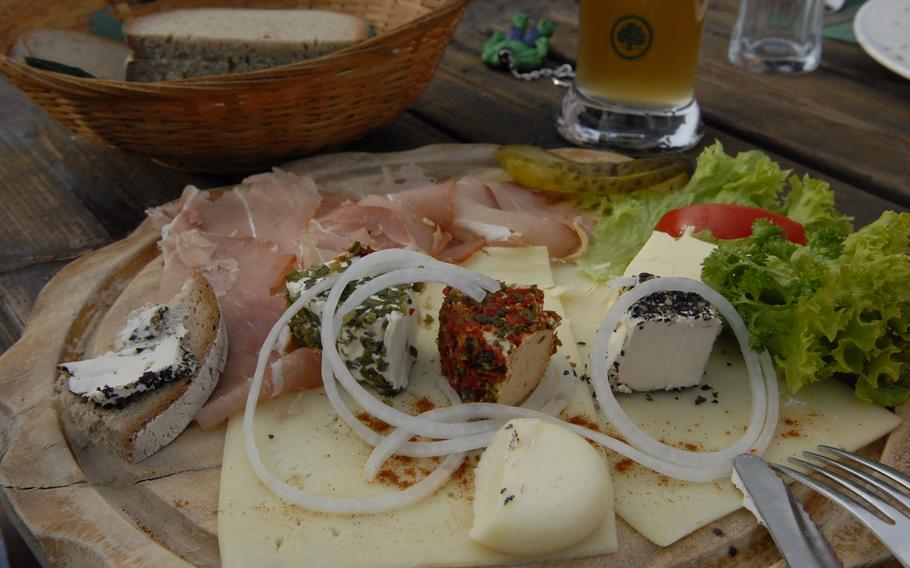 The ham and cheese platter at Bernd's Blockhaus in Weilerbach, Germany, comes with a generous spread of sliced ham, an abundance of butter and selections of soft and sliced cheese. A basket of brown bread serves as a nice accompaniment. (Jennifer H. Svan/Stars and Stripes)

The ham and cheese platter at Bernd's Blockhaus in Weilerbach, Germany, comes with a generous spread of sliced ham, an abundance of butter and selections of soft and sliced cheese. A basket of brown bread serves as a nice accompaniment. (Jennifer H. Svan/Stars and Stripes) 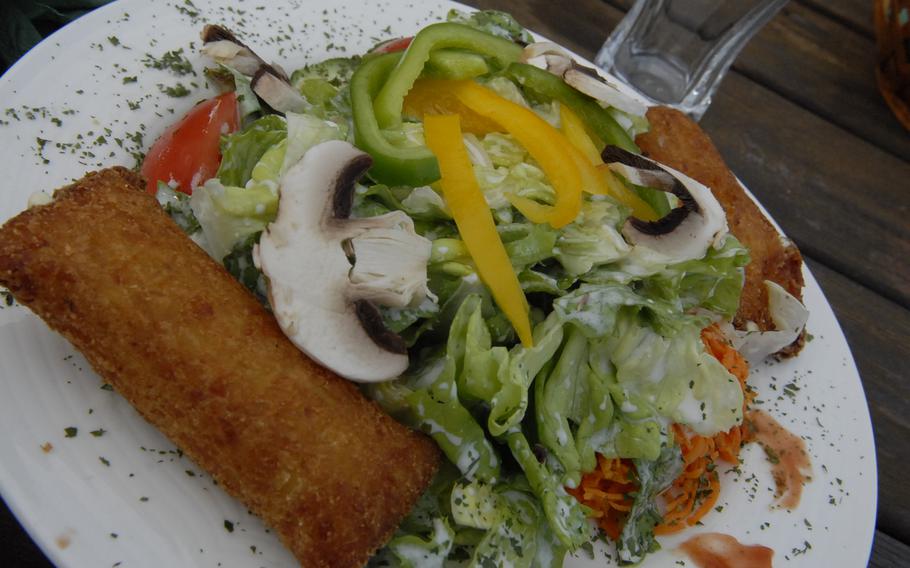 A salad with "potato pockets" is among the items on the menu at Bernd's Blockhaus. (Jennifer H. Svan/Stars and Stripes) 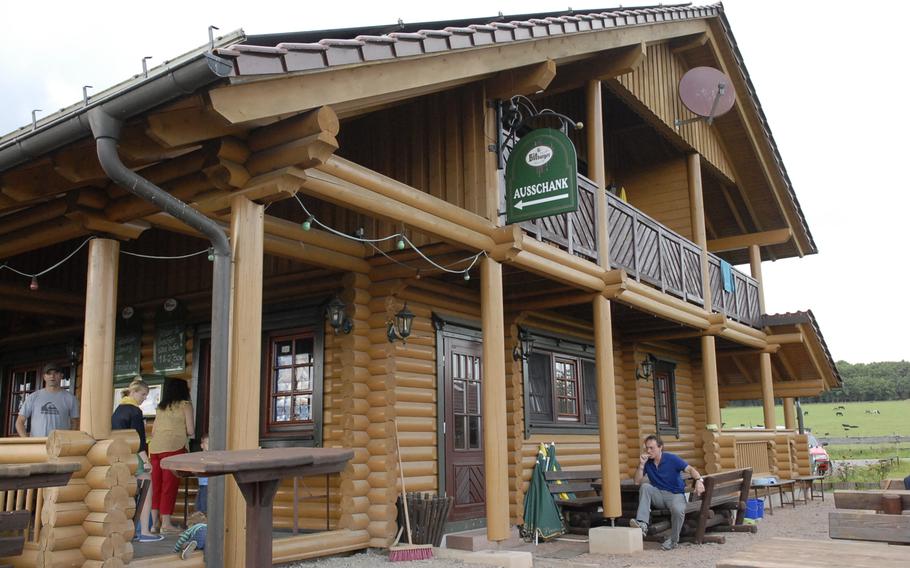 Bernd's Blockhaus is all wooden beams and rustic charm. The restaurant and guest house on the outskirts of Weilerbach, Germany, is open only on the weekends. On the menu is typical German fare with a few twists. The restaurant is kid- and dog-friendly. (Jennifer H. Svan/Stars and Stripes) 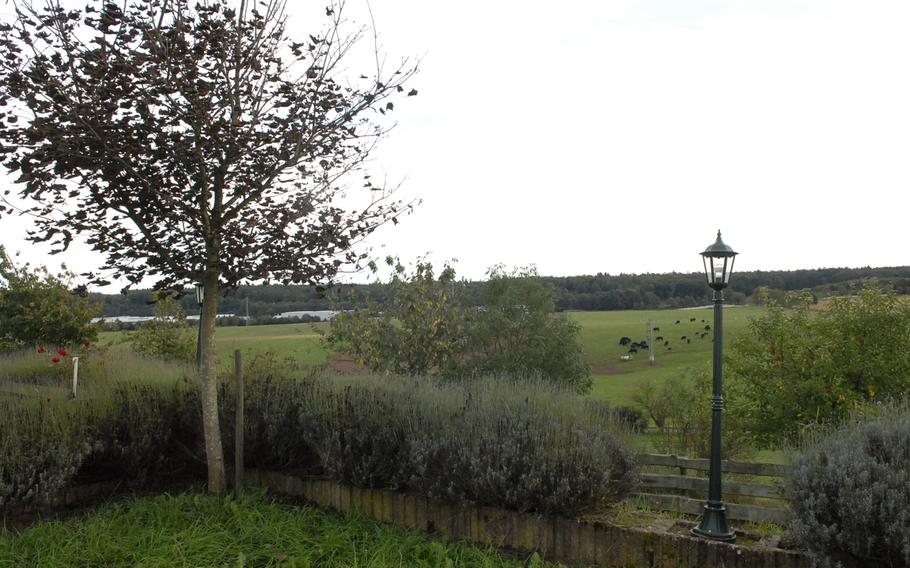 Cows dot the pastures surrounding the rustic Bernd's Blockhaus, a restaurant and guest house on the outskirts of Weilerbach, Germany. Children will love the animals dotting the landscape. (Jennifer H. Svan/Stars and Stripes)

I’m sitting outside with friends eating good food that I didn’t cook and drinking a pils; horses and cows dot the outlying scenic pastures. Most happily, my kids are running around in the grass, entertained by other kids — and not me. There’s even time to enjoy dessert or another pils.

This used to be the stuff of daydreams. Few restaurant outings with the youngest family members could be equated with relaxing, no matter how kid-friendly the place.

That’s changed now that Bernd’s Blockhaus in Weilerbach, Germany, is part of my life.

Being able to sit down for an entire meal, however, would be nothing to write about if the food was mediocre, which it’s not.

The Blockhaus’ menu is mostly typical German but with a few tasty twists. My favorite is the salad with three “potato pockets.” They look to be fried, with a light, flavorful cheesy sauce in the middle.

If I could give up the potato pockets for one meal, I would order the ham and cheese platter. At first, “ham and cheese platter” evoked an image of rolled up American-style ham and cheese slapped on a plate. But it’s so far from that. The ham is way better than anything that comes packaged at the store, and the several varieties of cheese come in blocks and slices, all served on a wood cutting board. Sliced pickles and a basket of brown bread with butter make it meal-worthy.

Usually, I can measure the quality of food by the pommes (french fries), and the Blockhaus has among the best I’ve tried in the area. One perk of having a 3-year-old: He always leaves pommes on his plate.

The restaurant also makes its own sausage. Daily specials change weekly and usually include a beef dish and sometimes venison. Specials on a recent Friday night included a “wild pig” sausage and a venison goulash. Portions are plentiful and prices are reasonable. The most expensive item on the menu was the rump steak special with french fries and salad at 14 euros (about 18 dollars).

Blockhaus means “log house” in English. A suitable name, considering Bernd’s Blockhaus is all wooden beams and rustic charm, a combination guest house and restaurant on pretty farmland that makes it seem farther than it is from Kaiserslautern’s dingy city center.

But the Blockhaus is an easy drive from Kaiserslautern. It sits just west of Weilerbach, next to grassy pastures along a network of biking and hiking trails. That makes it a motor-free option for residents of Weilerbach, Rodenbach, Mackenbach and other nearby villages.

The restaurant is open only on weekends, starting midafternoon on Friday. It is open for most of the day on Saturdays and Sundays.

The weekend schedule is probably a good thing, because it’s not the type of place where you can eat and run. And who would want to? The Blockhaus is the perfect place to relax. There’s plenty of outdoor seating, with big picnic tables in the back affording panoramic views and plenty of grass for the aforementioned kids to run around on. The restaurant, indoors and out, is dog-friendly. Though I’ve never eaten inside, the interior looks cozy.

The only flaw in the Blockhaus experience is ordering food. Orders are taken outside at a window — and for some reason, which I haven’t quite figured out yet, putting in one’s order sometimes takes a really long time, even if the line is relatively short. It seems the process is less than efficient, with staff writing down orders and calculating meal costs by hand; sometimes the same person taking orders is also the one getting your drinks.

But once your order is placed, the food comes fast.

Oh, yeah, and the cows. For a 3-year-old, this can be an irresistible temptation. I had to chase after mine when he took off after a herd of Black Anguses.

Bernd’s BlockhausLocation: Head north from Kaiserslautern on B270; go west on L367 past the turn for Weilerbach. Soon after passing Weilerbach, turn right onto L356 and then make an immediate left. A gravel parking lot is on the left. You can park there and walk to the restaurant (follow the signs), or you can turn right on the single-lane tractor road and drive a short distance to the restaurant. There is plenty of parking by the restaurant.