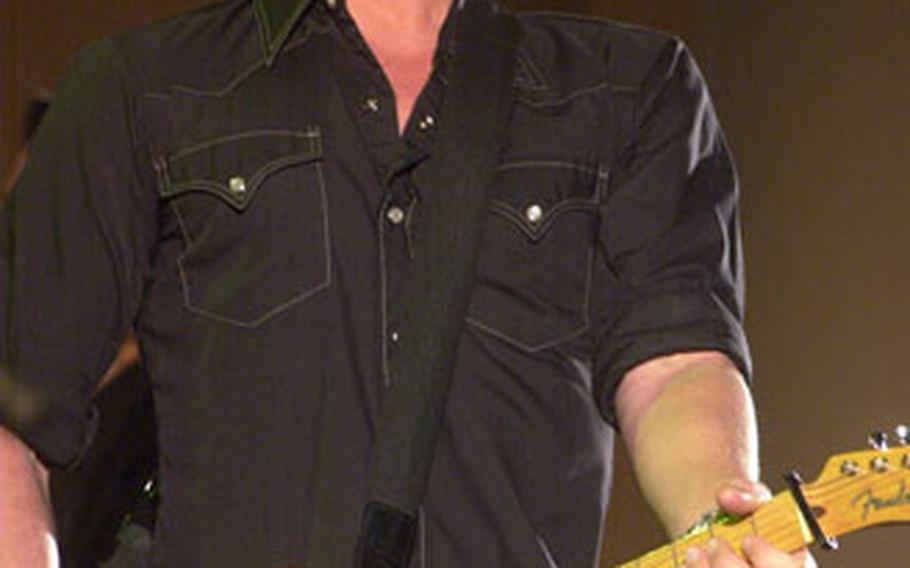 Dierks Bentley, the 2005 Country Music Association Horizon Award winner for emerging artist, was so close to the audience at a recent concert in Baumholder, Germany, that the crowd could reach out and touch him. (Terry Boyd / S&S)

Dierks Bentley, the 2005 Country Music Association Horizon Award winner for emerging artist, was so close to the audience at a recent concert in Baumholder, Germany, that the crowd could reach out and touch him. (Terry Boyd / S&S) Dierks Bentley poses with long-time fan Carla Foster and her children, Megan, 8, and Zachary, 12 after a recent concert in Baumholder, Germany. (Courtesy of Carla Foster) Most of the 500-plus crowd at the Baumholder show stood nearly the entire concert. Those who weren’t standing were dancing, such as Spc. John Giltner and his friend, Jamie Hood. (Terry Boyd / S&S) 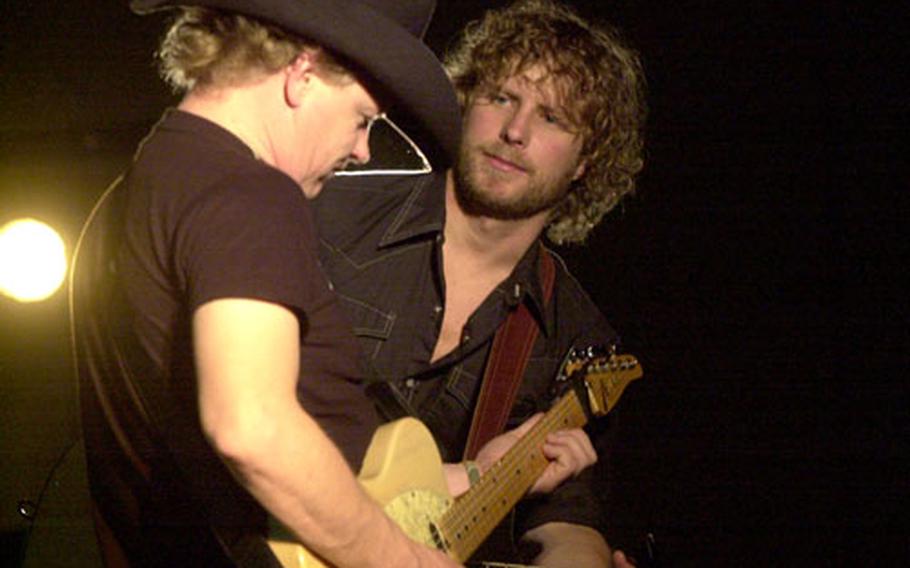 During much of the two-hour concert, the spotlight was on Bentley’s bandmembers, especially lead guitarist Rod Janzen, shown playing his vintage Fender Telecaster. (Terry Boyd / S&S)

Bentley ripped through two albums worth of material, &#8220;Dierks Bentley&#8221; and &#8220;Modern Day Drifter,&#8221; then threw in some Merle Haggard tunes and a bunch of other oldies for good measure.

Three hours after the two-hour show, Bentley was still signing autographs. It was after midnight when it was Spc. David Breedlove&#8217;s turn.

Bentley has built a fan base one connection at a time, said Michelle Hall, senior manager of creative services and international books for Capitol/EMI Records. One autograph at a time, 200 shows per year at least, Hall said.

In Baumholder, his one-night stand on Jan. 26 was big news at a base where about two-thirds of the troops were deployed, and that doesn&#8217;t get a lot of stars in the first place.

There will be a lot of 1st AD folks, years from now, reminiscing about that cold January night in Baumholder they saw Bentley play. For every one of the 500-plus at the concert, there will be many more who claim to have been. It may go down as not just a big night in Baumholder, but as part of a gradual shift in country music, with the rise of Bentley &#8212; more of a country-roots rocker &#8212; countering Nashville&#8217;s star- maker machinery.

She saw Keith in Mannheim last May, but amid a huge crowd on the airfield tarmac, said Carla Foster, the wife of a deployed officer. &#8220;[Keith] was just a speck on the horizon. I felt like Dierk&#8217;s show was far more intimate.&#8221;

That shouldn&#8217;t come as a huge surprise considering Bentley is in the midst of an unchecked breakout.

&#8220;Last year was a great year&#8221; is how the 31-year-old Arizona-born singer/songwriter put it. Bentley got the Country Music Association&#8217;s 2005 Horizon Award for emerging artists, a career-changing event considering previous Horizon recipients include Garth Brooks, Keith Urban and The Dixie Chicks.

And yet, he hung around after a concert that had an air of a casual get-together, signing at least 500 autographs that night in Baumholder, for people who never expected it.

&#8220;It was like he genuinely wanted to meet people in the community, to introduce himself. And he must have stood there two or three hours signing autographs.&#8221;

At the behest of Jonathan Watson, special events coordinator for MWR in Baumholder, Bentley took a detour in the midst of a mini-tour of Britain, even showing up the night before for Mexican food at the Larsens&#8217;. It was not without some trepidation that she hosted a country music star, Liz Larsen said.

Entertainers, and specifically hard-livin&#8217; country singers, tend to get crazy, then write a song about it later.

Playing a small show was fun, too, Bentley said, noting that he goes from playing select shows of about 7,000, up to 20,000 on tour with Kenny Chesney.

In Baumholder, the crowds were impressed, but more with how decent a guy Bentley seems to be.

Bentley, the 2005 Country Music Association Horizon Award winner for emerging artist, was so close to the audience that the crowd could reach out and touch him.