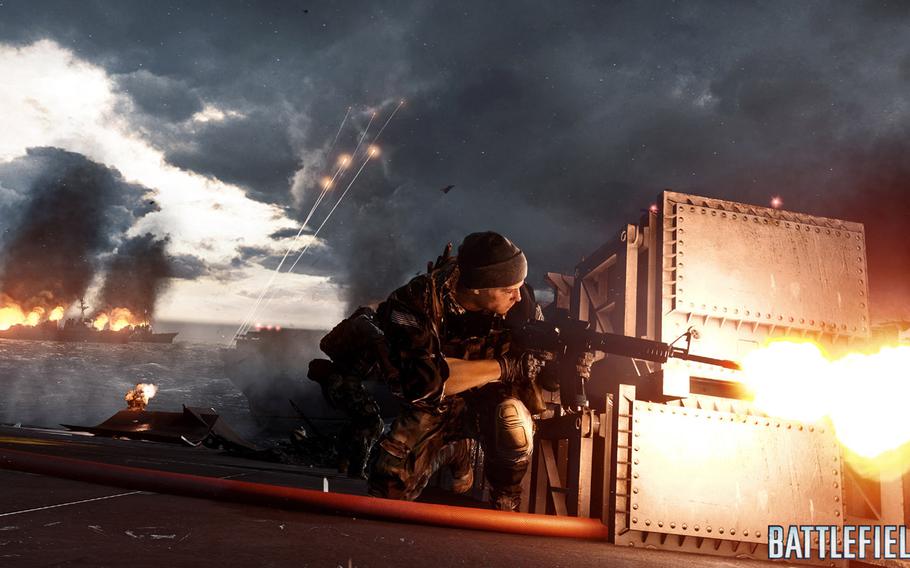 “Battlefield 4” incorporates a single-player campaign instead of its usual teamwork, large-combat approach. As a result, it plays like a lot of other recent shooters. (Courtesy of Electronic Arts)

“Battlefield 4” incorporates a single-player campaign instead of its usual teamwork, large-combat approach. As a result, it plays like a lot of other recent shooters. (Courtesy of Electronic Arts) 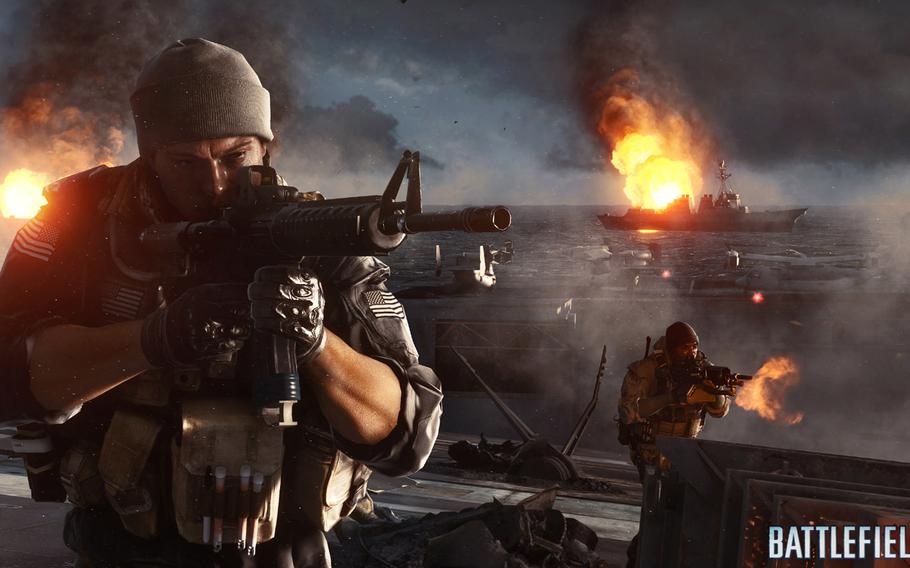 It seems that “Battlefield 4” has stolen the “Call of Duty” battle plans.

The “Battlefield” franchise — developed by DICE for Electronic Arts — is best known for large battlegrounds, combat involving vehicles, destructible buildings and a spirit of teamwork. Its primary rival, “Call of Duty,” generally focuses on infantry fighting in tight spaces and promotes a lone-wolf mentality.

This season’s “Battlefield” has changed in form and tone to match its rival — at least in the single-player campaign.

You play as Marine Sgt. Daniel Recker, who’s in charge of a recon team that operates from an amphibious assault ship named the Valkyrie. After a brief intelligence-gathering mission in Russia, your team is sent to Shanghai to extricate some VIPs amid a coup by the Chinese military. Before you know it, a major conflict has erupted and you’re fighting both the Chinese and the Russians.

These are just the first of many special operations that feel very reminiscent of other games. There’s a pinch of “Army of Two: 40th Day,” a little “Call of Duty: Modern Warfare 2” and some “Call of Duty: Black Ops II.” And that’s the problem with the campaign mode; it feels like a string of high-tension, over-the-top set pieces that you’ve played before.

In fact, there’s only one mission that made me feel like I was playing a classic “Battlefield” game with plenty of enemies on a large map, the opportunity to drive an armored vehicle and the ability to blow through walls to get to my foes. It was exhilarating.

Many of the other missions are also well designed and a lot of fun. However, there are only so many times you can fight across the flight deck of an aircraft carrier that’s been boarded by the enemy before it becomes old hat. (For the record, I think I’ve done that in at least three games in the past year.)

The campaign mode offers a few changes to the traditional “Battlefield” gameplay mechanics. You can now hit a button to highlight enemies that you’d like your comrades to engage. Since they generally do a pretty good job, this allows you to pick off specific threats more quickly. It also seems to allow more opportunities for you to flank your foes while they focus on your allies. There’s also a crescent-shaped indicator that lets you know when enemies sense your presence. I like both of these additions. I wasn’t so thrilled with the new driving mechanic, which uses a single joystick to control speed and direction in ground vehicles. It doesn’t seem to be nearly as responsive as previous control methods.

Fortunately, the game’s other controls are very smooth and efficient.

Of course all of this is lost on the many gamers who skip the campaign and go directly to the game’s popular multiplayer mode.

Online competition delivers all of the elements that make “Battlefield” distinctive — large maps, vehicles and destructibility. It also offers a specialization system that allows you to choose among assault, support, engineering and sniping. That means you can play the way you enjoy playing, knowing that you can drive tanks, fly helicopters or heal your allies if you aren’t a twitchy-fingered gunslinger. These elements all reach their peak in the “Conquest” mode, which features a rolling series of objectives that teams must either attack or defend.

Although this is familiar to “Battlefield” fans, there is one big change that has the potential to make every match a new experience. Developers call it “Levolution.” This allows gamers to change the nature of the battleground through their actions. For example, you can blow a hole in a levee and flood the surrounding area. Or, you can blow up the supports of a skyscraper and watch it come tumbling down. Or you can simply flip a switch and use security gates to block approaching enemies.

Aside from “Conquest,” the multiplayer mode offers several other types of matches, including the new “Obliteration.” Here, a bomb appears on the map and both teams must fight to see who can claim it and use it to blow up a rival base.

In addition, many of the maps offer more vertical options than in the past. You can climb atop a roof for sniping or even ascend a skyscraper for a high-level firefight. If things get too hot, you can parachute to the ground below.

But these changes are relatively minor when compared to what will happen when “Battlefield 4” moves to the Xbox One and PlayStation 4.

Of course the next-gen version of the game delivers better graphics. You’ll get all of the same vehicles, destruction and battlegrounds of the current game but at an impressive 60 frames per second.

However, that’s just window dressing. The most significant change is the ability to engage in immense 64-player online matches. The larger number of combatants changes the entire nature of the game, increasing the action and intensity.

I had a small taste of the next-generation technology at the E3 Electronic Entertainment Expo a few months ago. Sadly, I have to admit that neither the better graphics nor the additional teammates improved my performance.

The game receives a mature rating for violence and strong language.

Bottom line: “Battlefield 4” is best when it sticks to its traditional turf — a multiplayer mode that offers high-intensity conflict with tanks, aircraft and teamwork. In mimicking “Call of Duty” in the single-player campaign, it comes up short.